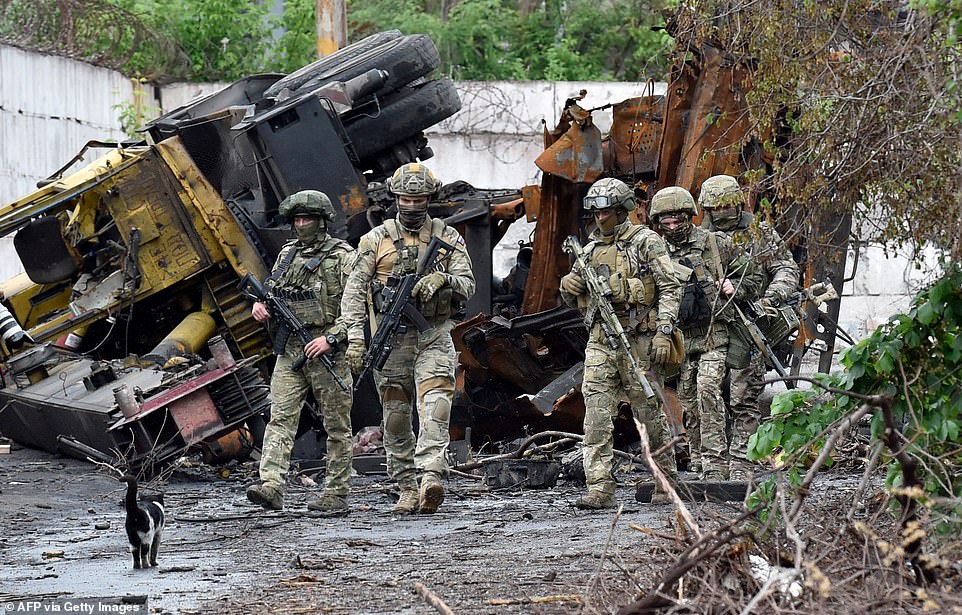 Russia has virtually no hope of winning its war in Ukraine even if it manages to seize the whole of Donbas in the coming weeks, a former spy and commander who was instrumental in starting the original conflict has said.

Igor Girkin – who goes by the nom-de-guerre Igor Strelkov, meaning ‘shooter’ – has given a withering assessment of Putin‘s war effort, saying that Russian units are suffering ‘huge losses’ by ‘banging their heads against’ deeply entrenched Ukrainian troops, and are being led by commanders who ‘leave much to be desired.’

Despite Russia making piecemeal gains on the Donbas front in recent days – capturing towns around Popansa and pushing to encircle Severodonetsk – Strelkov says Ukraine is fast-mobilising new troops, rearming using Western weapons, and digging into new defensive positions that will be hard to overrun.

It is ‘meaningless to hope for victory’ without a general mobilisation of Russia’s army, Strelkov argues, which Putin refuses to do because he is being molly-coddled by his inner circle into believing victory is still possible. As long he remains shielded from reality ‘nothing will change, and when it does change… it will be too late to do anything.’

Once the Russian offensive grinds to a halt – something Strelkov predicts could happen as soon as mid-June – Ukraine will then switch to counter attacks as it did around Kyiv and Kharkiv, forcing Putin’s commanders on to the back foot and likely pushing their badly-mauled units backwards – perhaps to their own borders.

But even if no counter-attacks come, Russia will be faced with the prospect of trying to hold a long front line against well-armed and newly-reinforced Ukrainian defenders who will refuse to give up the fight, all the while Russia’s economy will flatline under sanctions.

Russian troops patrol through the streets of Mariupol, which fell to Putin’s forces this week in a major propaganda win for the Kremlin. But is comes amid warnings that his army cannot win the war in Ukraine 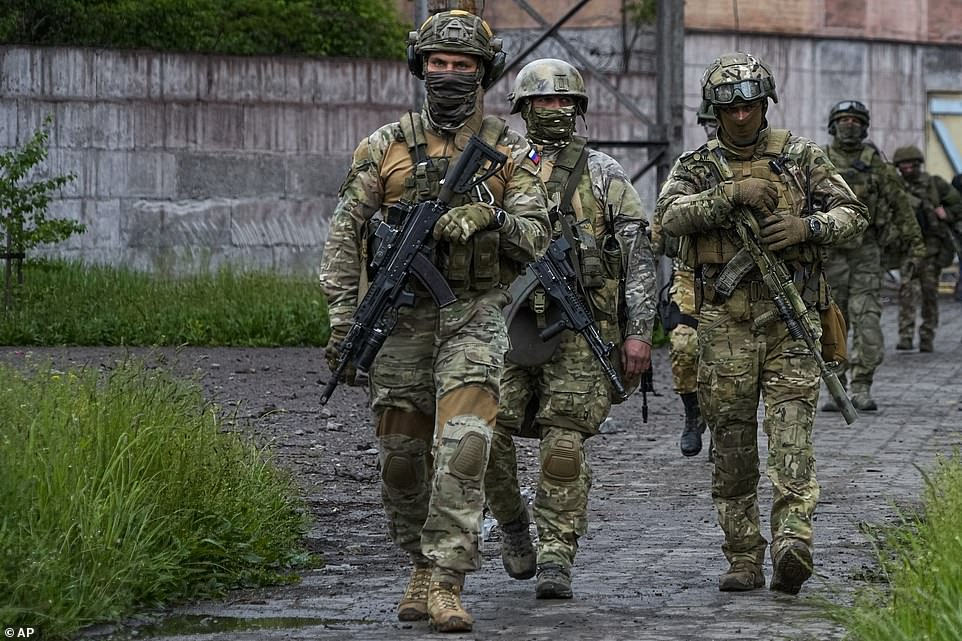 Russian troops are steadily advancing across Ukraine’s eastern Donbas (pictured in Mariupol), but are suffering ‘huge’ losses in the process which will leave them too weakened to defend the eventual frontline – which will be hundreds of miles long 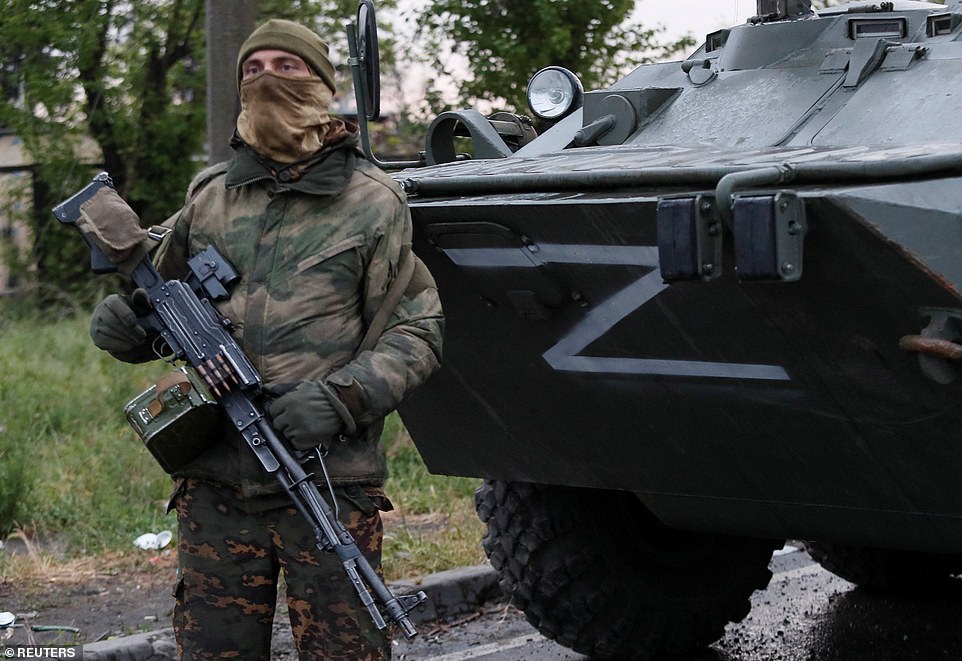 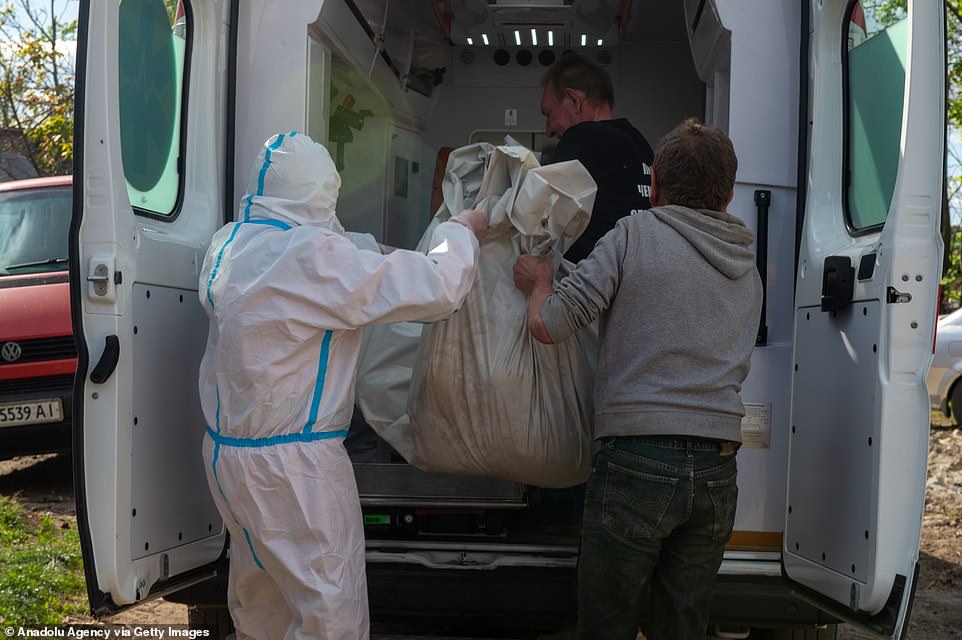 Ukraine is suffering heavy losses in Donbas, but is reinforcing with newly-mobilised troops and rearming with Western weapons in anticipation of counter-attacks once the Russian advance has stopped (pictured, bodies exhumed in Kharkiv) 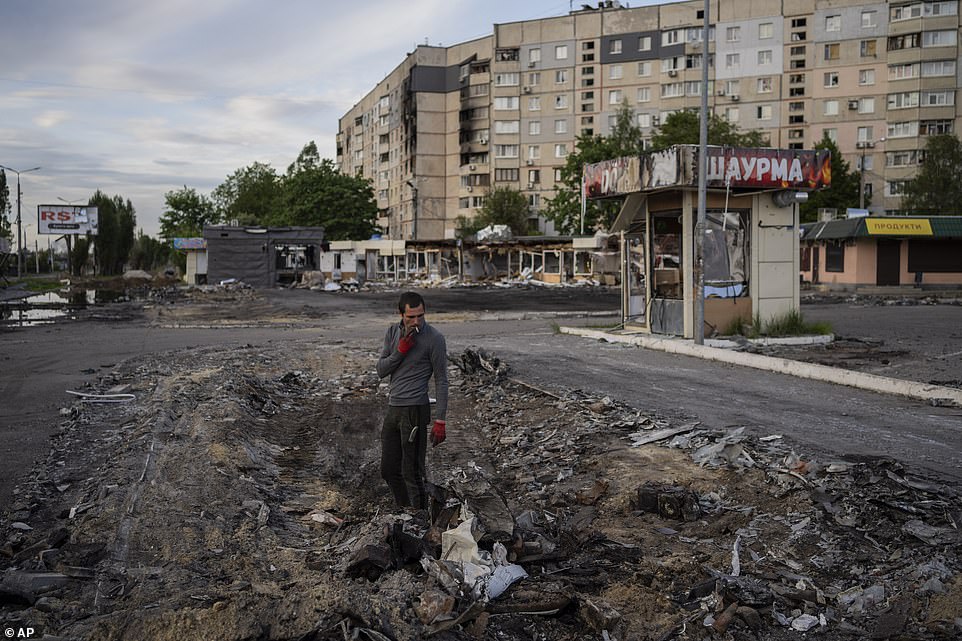 A Ukrainian man helps clear up the damage caused by Russian attack on the city of Kharkiv, which has now been returned to Kyiv’s control after Putin’s troops were driven back from the city

Putin has been accused of ‘weaponising food supplies’ with the blockade, which the UN warns could cause global famine and unrest if urgent action is not taken.

Washington believes supplying Harpoon missiles and other long-range rockets would force the Russian ships to pull back from the coast, allowing millions of tons of grain to flow out of the country.

Before the war, Ukraine exported around 80 per cent of its farm produce via ships from its Black Sea coast, which has now totally stopped.

Efforts are being made to improve rail and road links to replace the lost shipping, but it is thought they can only replace a quarter of the capacity when fully operational – something that will come too late to stave off shortages.

Ukraine is known as the ‘breadbasket of Europe’ because it exports up to a fifth of the world’s barely and rapeseed, a tenth of global wheat and up to half the world’s sunflower seeds.

Losing those exports will mean driving up prices in wealthier western countries who can afford to absorb the increases, but could have devastating effects on poorer countries where supplies will likely run out.

Antonia Guterres, UN chief, told a New York summit this week that ‘tens of millions’ will be at risk of malnutrition, famine and starvation if action is not taken, with those in the Middle East and Africa being most at risk.

The ramifications could be far-reaching.  The last time the Middle East suffered widespread food shortages it proved the spark for the Arab Spring.

That, in turn, led to widespread unrest across the region which aided the rise of ISIS, and ultimately dragged the West into a war.

It is perhaps the most-damning assessment of the war yet to come out of Russia, albeit from a man who has spent the past several months lashing out at Putin and his inner circle via his YouTube and Telegram channels – accusing Defence Minister Sergei Shoigu of ‘criminal negligence’ and ‘suspected treason’.

Strelkov’s account also tallies with what many Western analysts and experts have been saying for weeks – that, in effect, Putin lost his war the moment he failed to take Kyiv and all that remains to be decided is how much blood and treasure he is willing to expend in an effort to save face.

Writing on Telegram late Thursday, Strelkov said: ‘Let’s imagine for a second, that in the next few weeks the enemy will be after all defeated through continuous frontal and flank attacks, and completely pushed out of [Donbas] borders. And? What will this achieve? Will this end the war? No, not at all.

He adds: ‘When [Russian troops] weakened in heavy fights and bloody assaults reach the borders of [Donbas], they will be met by fresh and well-equipped [Ukrainian] units at frontiers prepared for defence in advance.

‘Even if those fresh units for whatever reason decide not to take over the initiative and begin a counter-offensive – still the Russian Federation will face a perspective of a long positional war, which is nearly fatal (in current conditions) to our economy, social and socio-political situation.

Summing up his position, Strelkov concluded: ‘It’s meaningless to hope for victory through attrition taking into account that almost all of Europe and North America are acting as a rear for [Ukraine].

‘Thus, it will be necessary to try and defeat the enemy in field battles. And, excuse me, with whom, and with what?! If so far not even the partial mobilisation has been carried out?! No one is giving clear answers to these questions. Simply because there aren’t any.’

Russia is now almost three months into what was supposed to be a days-long ‘special military operation’ to seize the Ukrainian capital, decapitate the government, install a pro-Kremlin puppet and return the country to Moscow’s so-called sphere of influence.

After failing to take the capital, Putin’s generals ordered a retreat from the north of Ukraine in order to focus their efforts on seizing the eastern region of Donbas – where fighting between Ukrainian troops and Moscow-backed rebels has been ongoing since 2014.

Strelkov was instrumental in starting that fight, and for a time served as defence minister of the so-called Donetsk People’s Republic (DPR) which is now heavily involved in fighting in the region.

DPR troops have been leading the siege of Mariupol – which this week fell into Russian hands after 82 days under siege when the final defenders of the Azovstal steel works agreed to surrender. 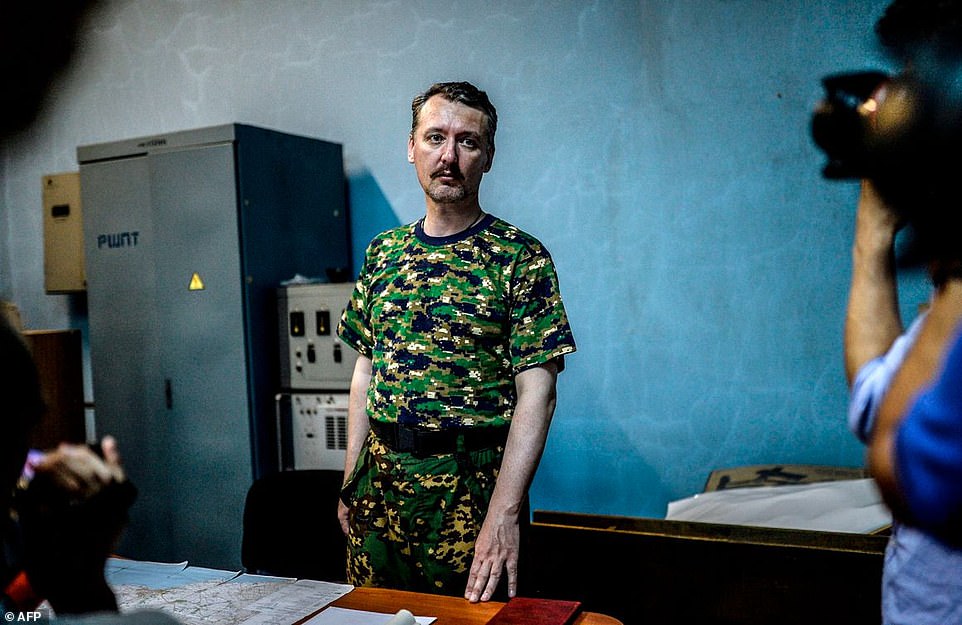 Igor Girkin, an ex-FSB agent who led fighting in Donbas in 2014, has given a withering assessment of Russia’s current efforts in the region – saying it is ‘pointless to hope for victory’ 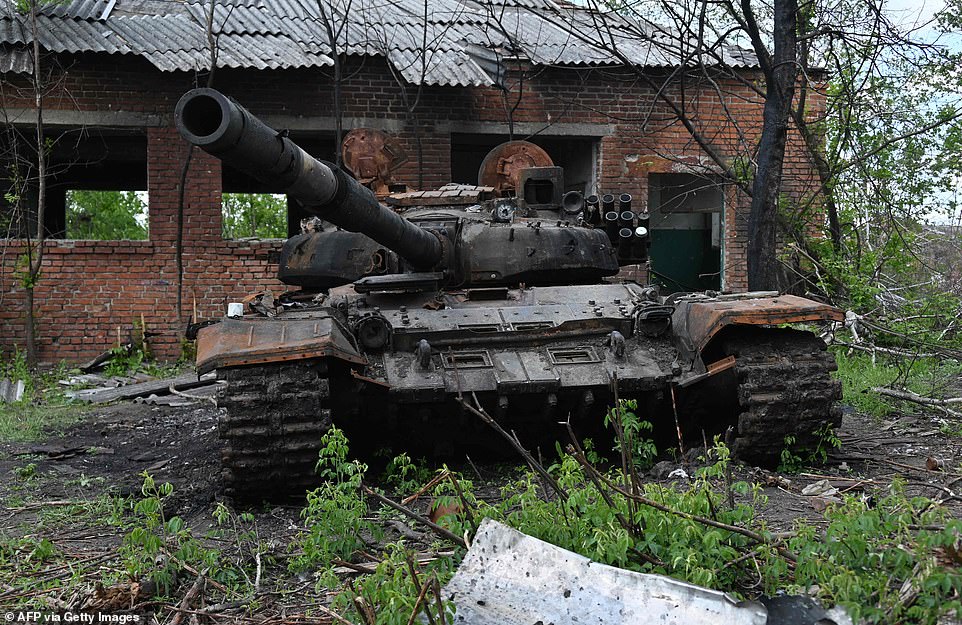 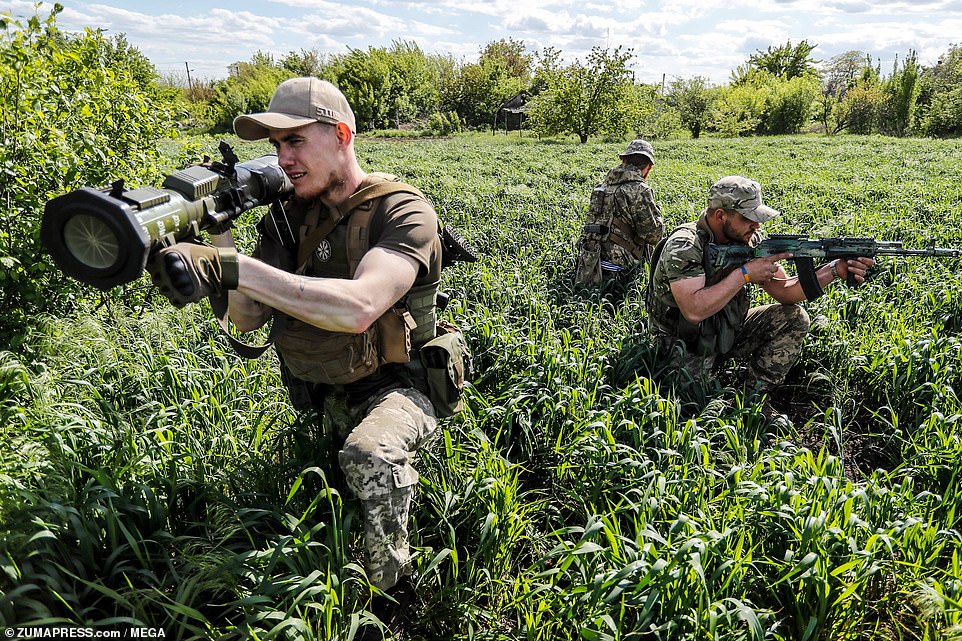 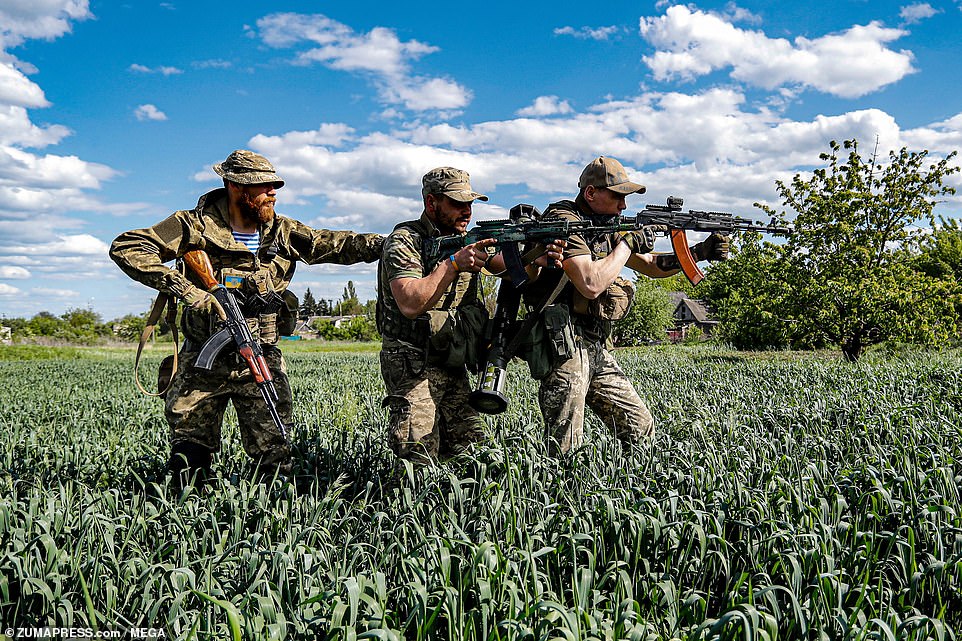 Ukrainian troops from an intelligence battalion conduct a patrol close to Russian frontlines in Donetsk, Donbas 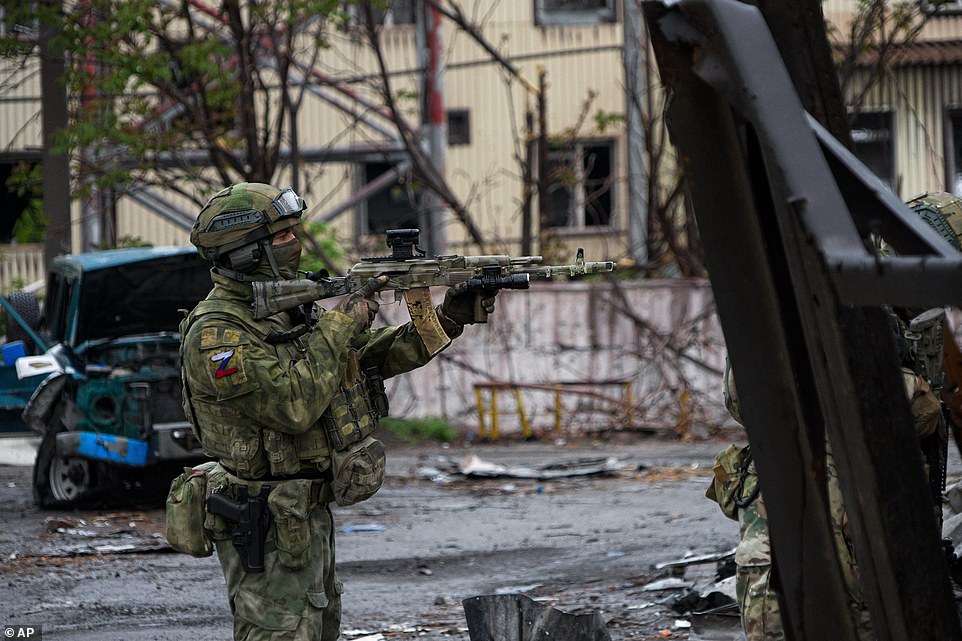 A Russian soldier aims his rifle while patrolling the Ilyich Iron and Steel Works in the city of Mariupol, after it fell to Putin’s men 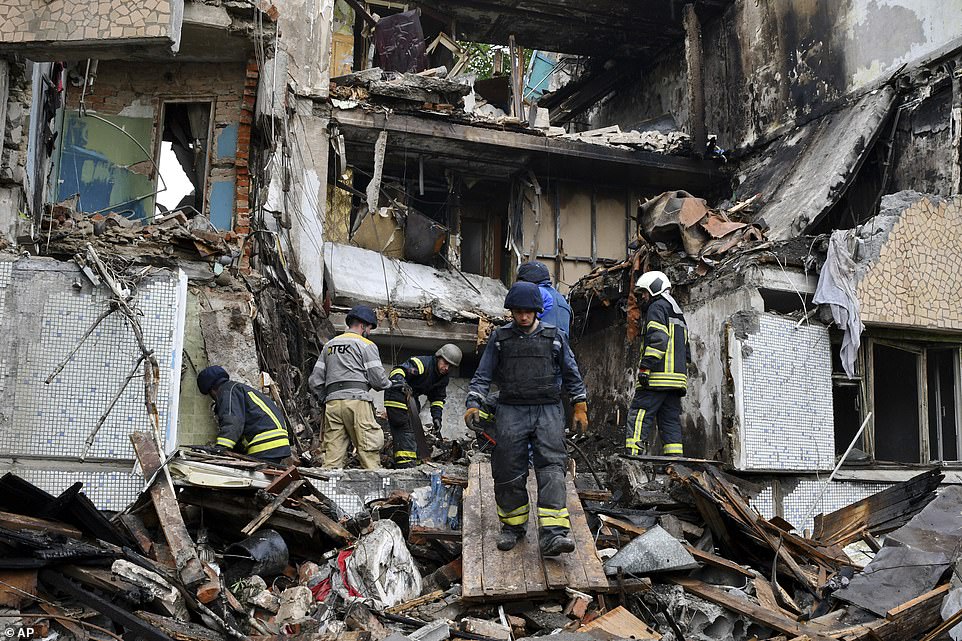 Rescuers work at a site of an apartment building destroyed by Russian shelling in Bakhmut, Donetsk region

Strelkov acknowledges this a ‘major propaganda success’ for Putin, but believes it will do little to shift the overall tide of the war in Russia’s favour.

Speaking last night, President Zelensky said Russia’s attack on the Donbas had turned the region into ‘hell’ and had ‘totally destroyed’ some towns and cities.

The defence ministry in Kyiv said Thursday that Russian forces were preventing civilians in Donbas from fleeing to Ukrainian-controlled territory.

In Severodonetsk, 12 people were killed and another 40 wounded when Russian forces shelled the eastern city, the regional governor said.

Severodonetsk and its sister city Lysychansk make up the last pocket of Ukrainian resistance in the smaller of the two regions comprising the Donbas war zone.

Russian forces are trying to surround the two – split by a river marking a central front of the war – and are bombarding them to try and wear down resistance and starve residents of supplies.

Zelensky on Thursday described the bombardment of Severodonetsk as ‘brutal and absolutely pointless’.

Ukraine’s allies, led by the United States and the European Union, have given billions of dollars in assistance – including military equipment – to Kyiv since the Russian invasion began on February 24.

The US Congress on Thursday approved a huge weapons and aid package worth $40 billion, and the White House said President Joe Biden would sign it during his trip to Asia.

The bundle includes $6 billion for Ukraine to enhance its armoured vehicle inventory and air defence system.

The conflict has sent shockwaves through the global economy, especially in energy and food markets.

Russia and Ukraine produce 30 percent of the world’s wheat supply and the war has sent prices surging. Russia is also a major exporter of fertiliser.

UN Secretary-General Antonio Guterres has warned that it could spark a food crisis that could last for years.

The United States and Russia blamed each other Thursday for the worsening food situation.

Washington called on Russia to allow exports of Ukrainian grain held up at Black Sea ports.

‘On the one hand, insane sanctions are being imposed against us, on the other hand, they are demanding food supplies. Things don’t work like that, we’re not idiots,’ he said on Telegram.

‘Countries importing our wheat and other food products will have a very difficult time without supplies from Russia. And on European and other fields, without our fertilisers, only juicy weeds will grow.’ 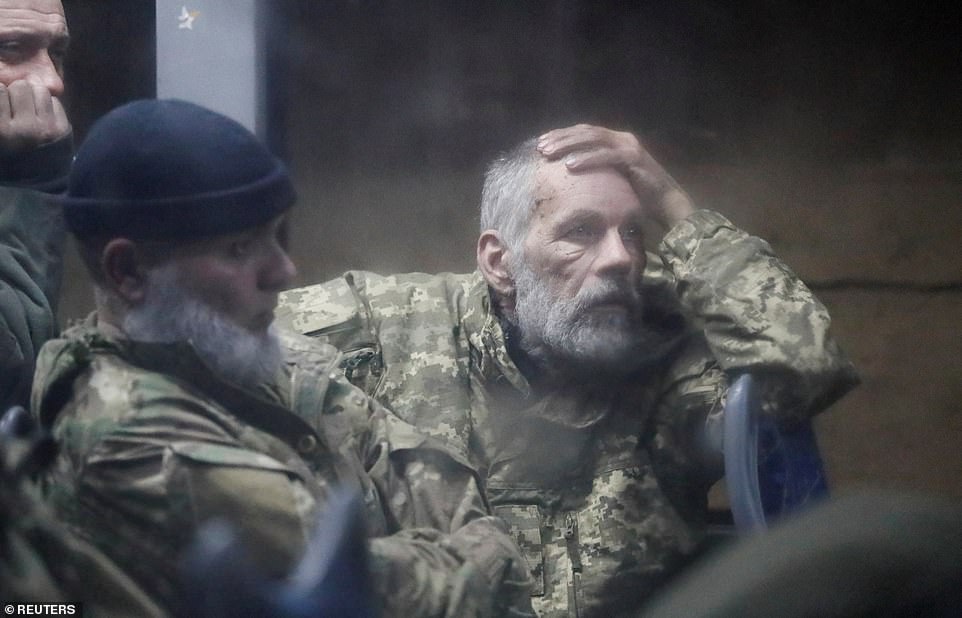 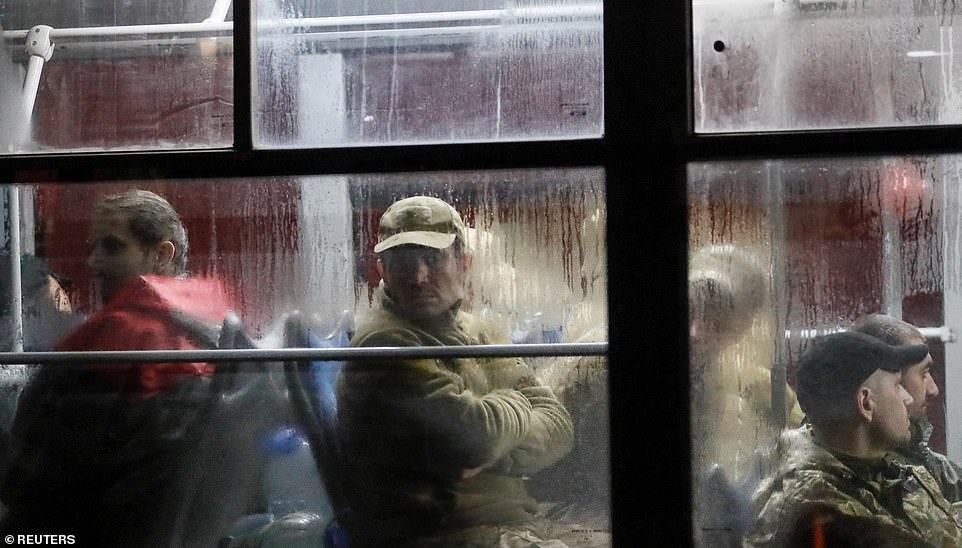 Ukraine has surrendered the city of Mariupol after more than 82 days under Russian siege, having held up Putin’s forces from joining the frontline in Donbas and weakening them in the process 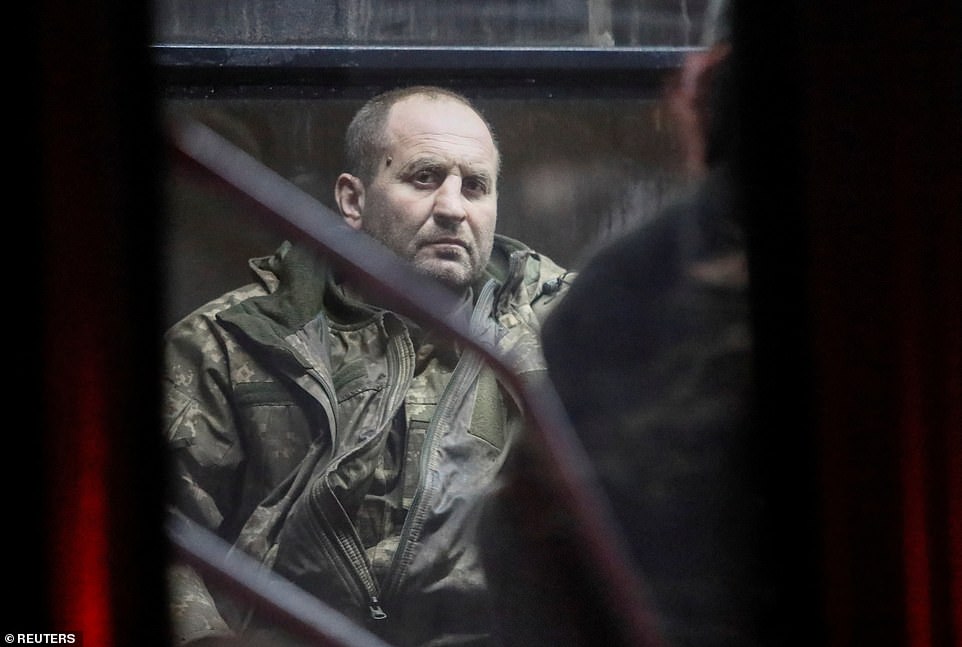 Electricity market is SUSPENDED as ‘low solar and wind output’

Michael J. Fox and Tracy Pollan step out at A Funny Thing Happened On...

‘One year home with my family sure looks good on me’: Bill Cosby brags...