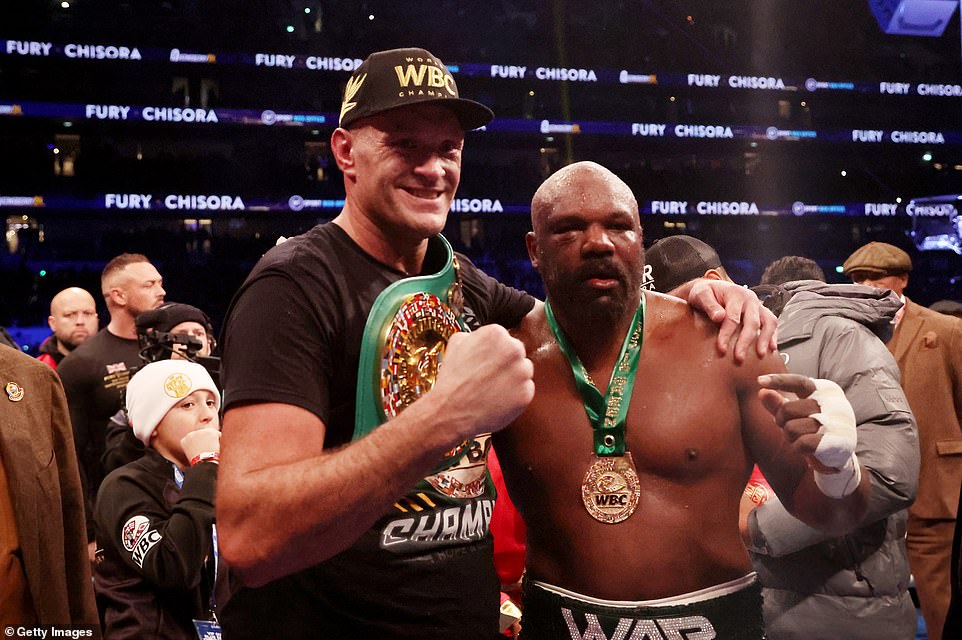 Tyson Fury did a number on his old friend Dereck Chisora in the refrigerated Tottenham Hotspur Stadium on Saturday night. The numericals which counted were two minutes and 51 seconds of the 10th round.

That was the moment when referee Victor Loughlin decided Dereck Chisora had taken enough punishment. More than enough in truth.

His corner should have gone through with their visible inclination to pull their gallant challenger out at the end of the ninth, when he was cut under the eye and spitting blood.

Whether Fury missed opportunities for a straight KO earlier or felt a twinge of reluctance to finish off his friend is unclear.

After a mixture of bullying punishment and masterclass boxing the Gypsy King hailed Chisora as a warrior, then screamed at Usyk ‘the rabbit’ to nerve himself for the task ahead. Usyk stood staring at him at close range, saying nothing.

Fury’s next port of call after this odd fight in which he won every round will be to sign the contract. Before, hopefully, flying to Doha to drink for England at the World Cup quarter-final. 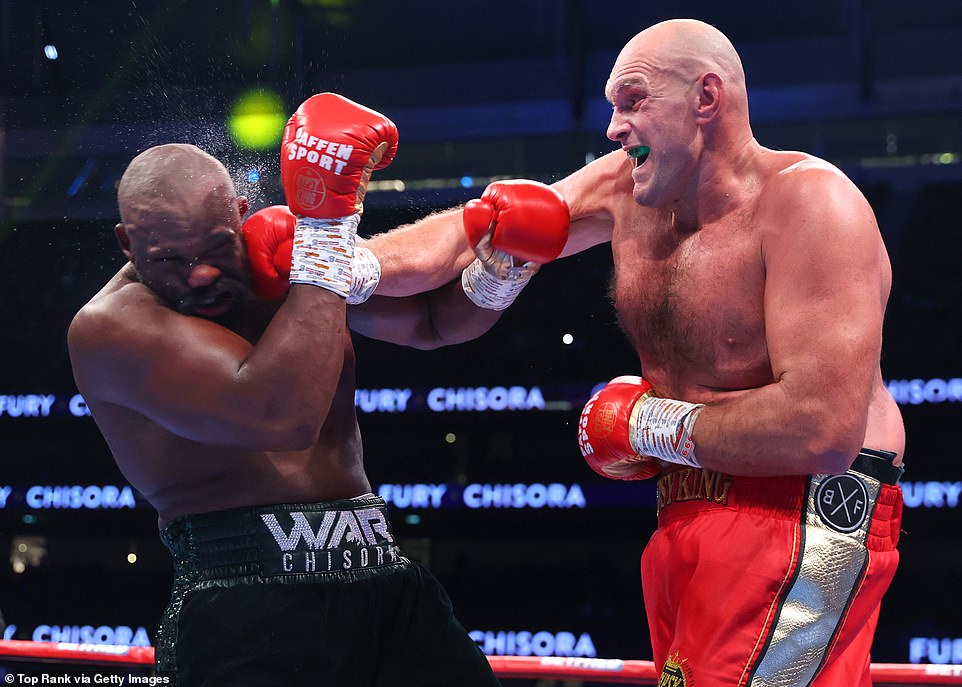 The fight was stopped by the referee with Chisora receiving unnecessary punishment, as was the case for the full 10 rounds 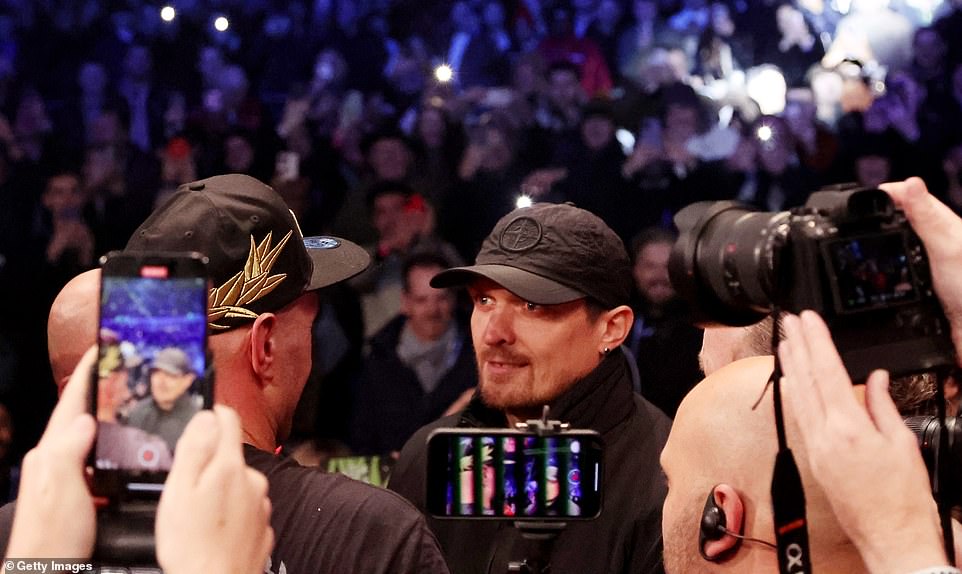 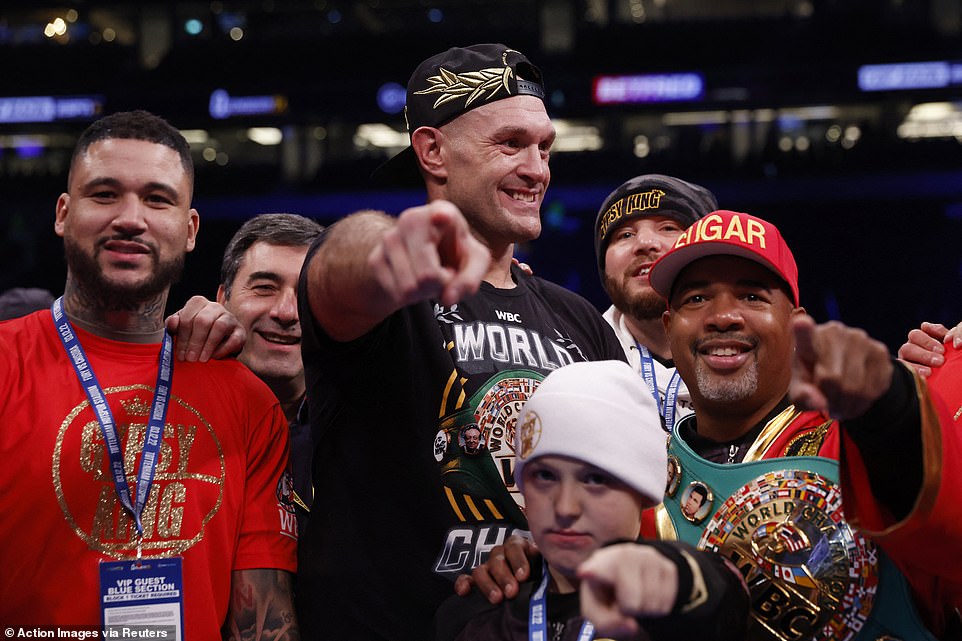 It was a glittering spectacle which would have set the scene perfectly for a Winter Olympics, at which the competitors are wrapped up even warmer than the mulled wine drinkers watching from the snow-covered slopes.

It would have made a pretty setting for the annual musical on skates across town at Wembley Arena. Or leant a sparkling back-drop to the Winter Wonderland fun-fare packing them in nightly in Hyde Park.

But here in London N 7 the boxers were stripped to their shorts, boots and like the rest of us – gloves.

Open air prize-fighting in Britain in the dark month of December is traditionally conducted on the lawns beside country houses by man servants as a way of entertainment for the lords and ladies on Boxing Day.

But the Gypsy King enjoys being different and here he was breaking new, albeit frozen ground. By way of a bare-chested warmup – yes, warm up – for a spring fight in hotter climes for the undisputed world heavyweight championship. 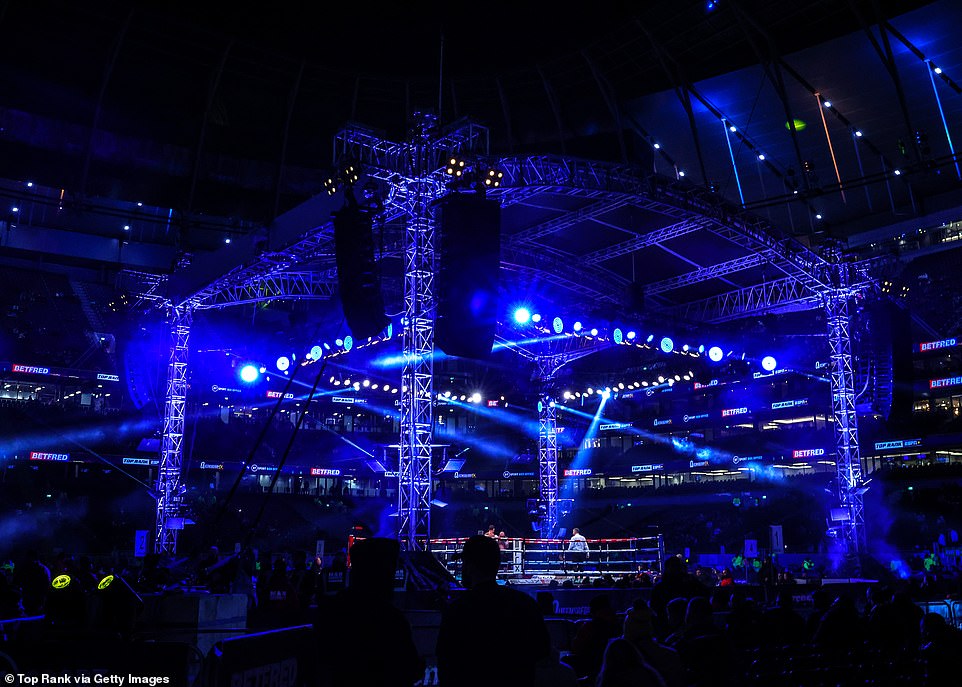 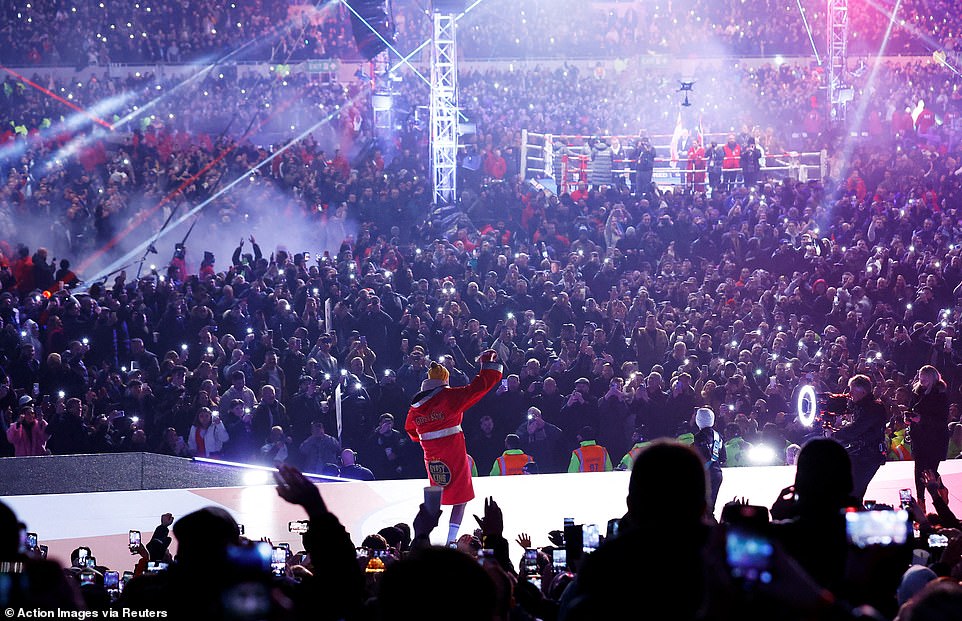 But Fury put on a show, as he always does, as he made his way to the squared circle in the 60,000-seater N17 stadium

The opponent then will be his rival title holder Usyk, who was well-clad at ringside and unlikely to be feeling the cold too severely having just flown in from the sub-zero battlegrounds of his native Ukraine.

In that context there were few grounds for complaint from we the refrigerated onlookers.

And if any entertainer can heat up a crowd it is Tyson Fury. He even came out with a warm feeling for his dance partner this Saturday night. He and Chisora are long-time pals, even though they had to be slugging enemies here for a third time in their careers.

The atmosphere was heated a little by the preceding fight in which Daniel Dubois survived a wild fright before coming back to save his WBA regular heavyweight title.

Dynamite Daniel nursed his leg back into action in the second and then forced a stoppage with a bombardment of truly explosive punches as the very end of the third round.

The resulting body warmth of 60,000 plus fans defied the official drop in temperature to six degrees. By then Fury had arrived at the Stadium in a yellow bobble hat. 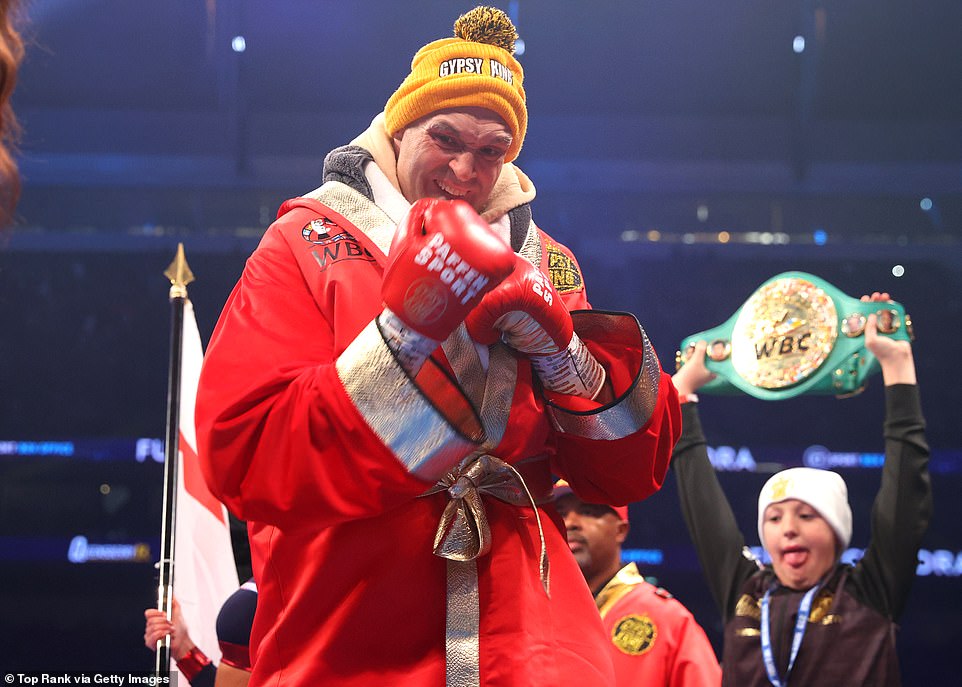 Fury, keeping himself warm, was dressed in a bright red robe – and a thick woolly hat, as he shadow boxed before the fight 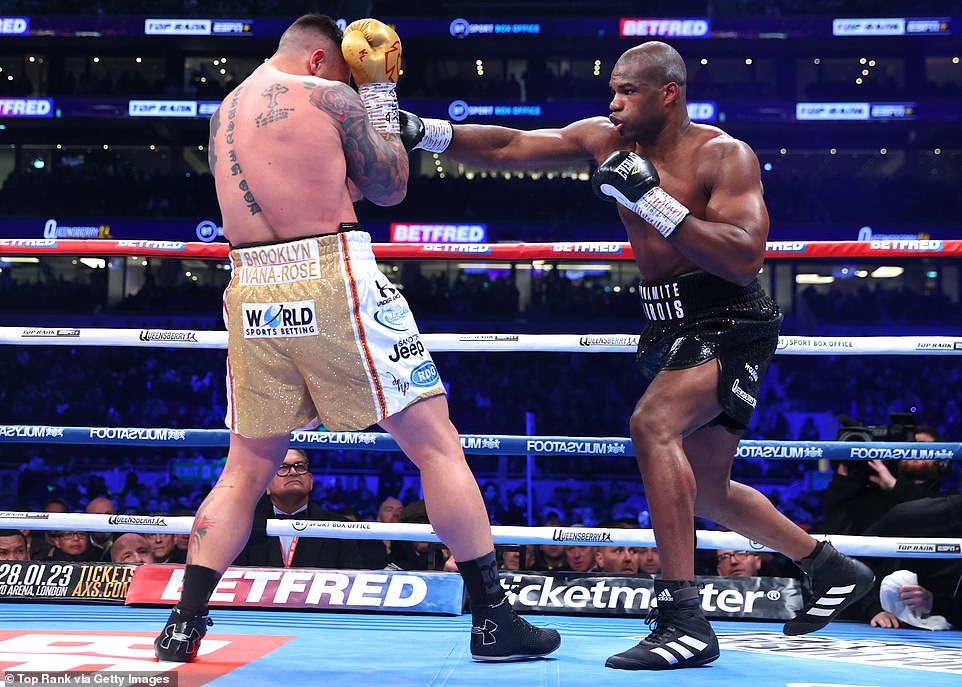 Fury and Chisora had threatened to start slugging as soon as they touched gloves, but with the bout to begin, and as Chisora lunged forward, Fury obeyed instructions to wait for the opening bell.

A war-hungry Chisora then charged in again but Fury mostly picked him off on the way in, in a first round that set the tone for what was to come.

Chisora was wobbled a little for the first time by a left hook as round two began, which set up a bombardment in the final of the three minutes which Chisora did well to survive. Fury, forever a showman, winked at him at the bell.

But Del Boy continued to ship punishment as Fury threw in brilliant and withering lefts and rights. Chisora was clinging on, but when Fury shoved him away he tumbled into the ropes with Fury a mile on top.

Chisora then connected with a hefty right, showing there was some life yet in the old dog, but Fury continued to coast through the fourth round behind his long jab. 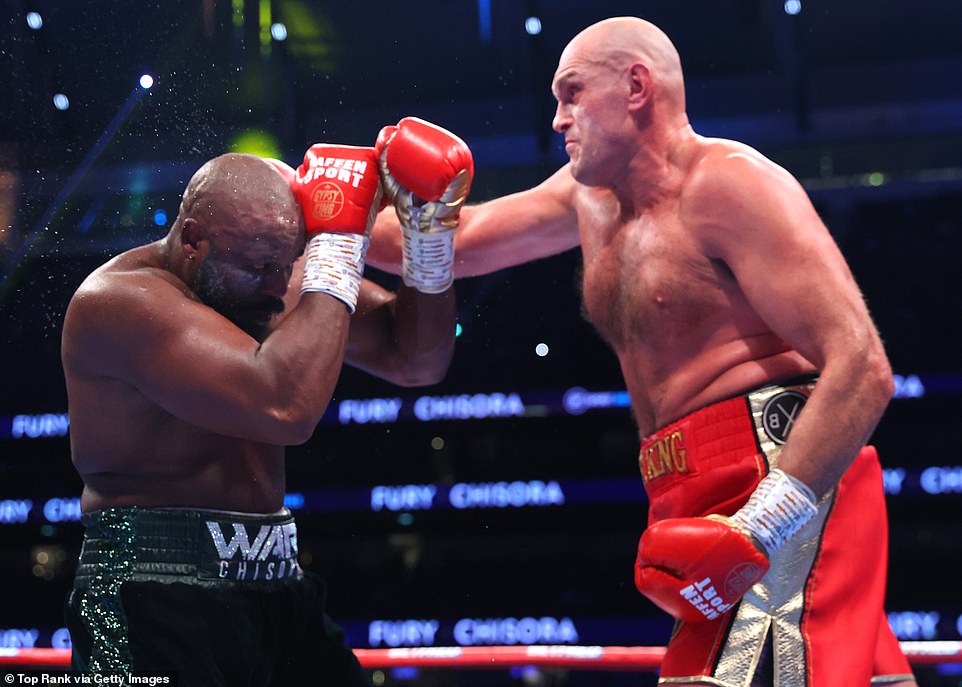 From the first round, it was Fury who was in control as veteran Chisora, 38, looked for a punch from the gods – his only hope 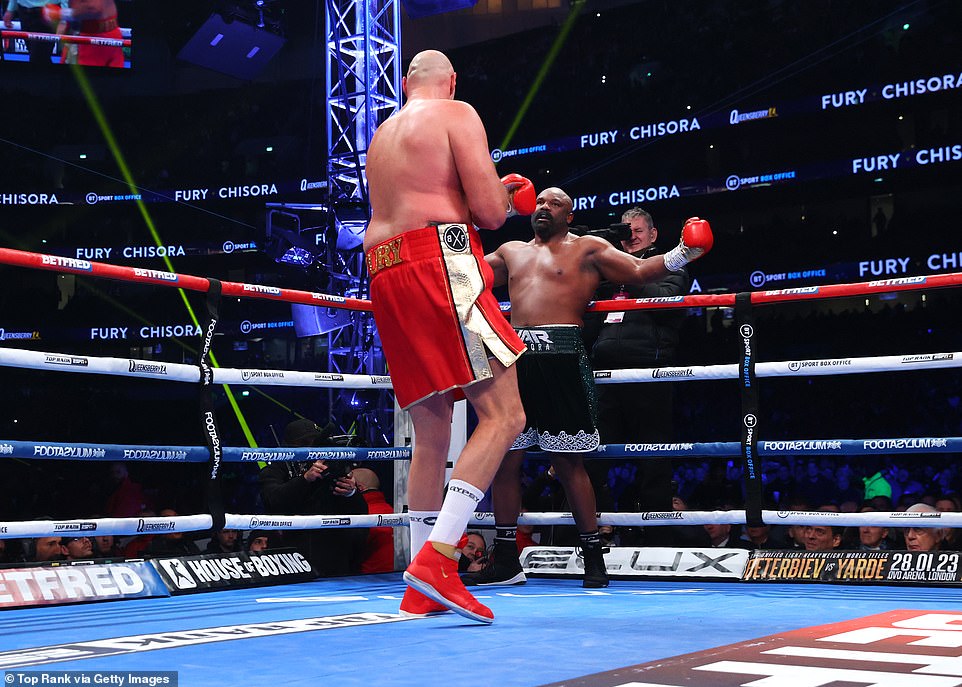 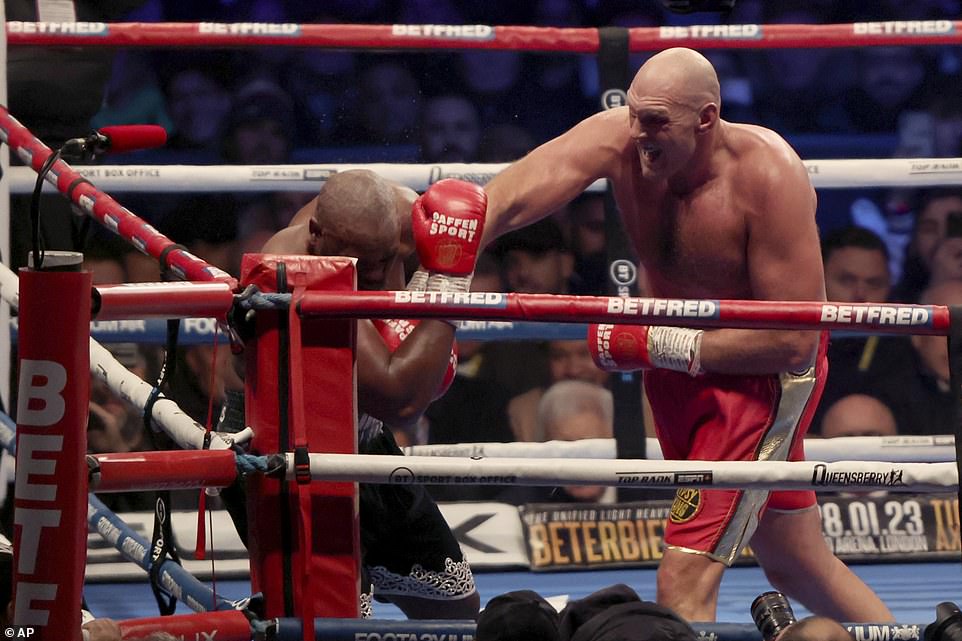 But as the fight went on, it started to become more of an exhibition for Fury, who was able to do what he wanted in the ring

Fury, though, clearly had no haste in finishing Chisora off, but Del Boy was beginning to wilt as he staggered backwards under yet more pressure.

And as the fight was approaching its halfway point, it was becoming more of an exhibition bout for a relentless Fury.

Chisora admitted beforehand that he had no hope of winning on points, and by the seventh round we were well beyond the point of him needing a knockout. Doggedly he battled on and as he survived another barrage, and Fury saluted him by touching gloves at the end of the round.

But Chisora was soon cut under right eye, and then spitting blood too as he took a continual battering. Chisora’s corner were on the verge of pulling him out, but finally referee Victor Loughlin came to the rescue and waved it off. 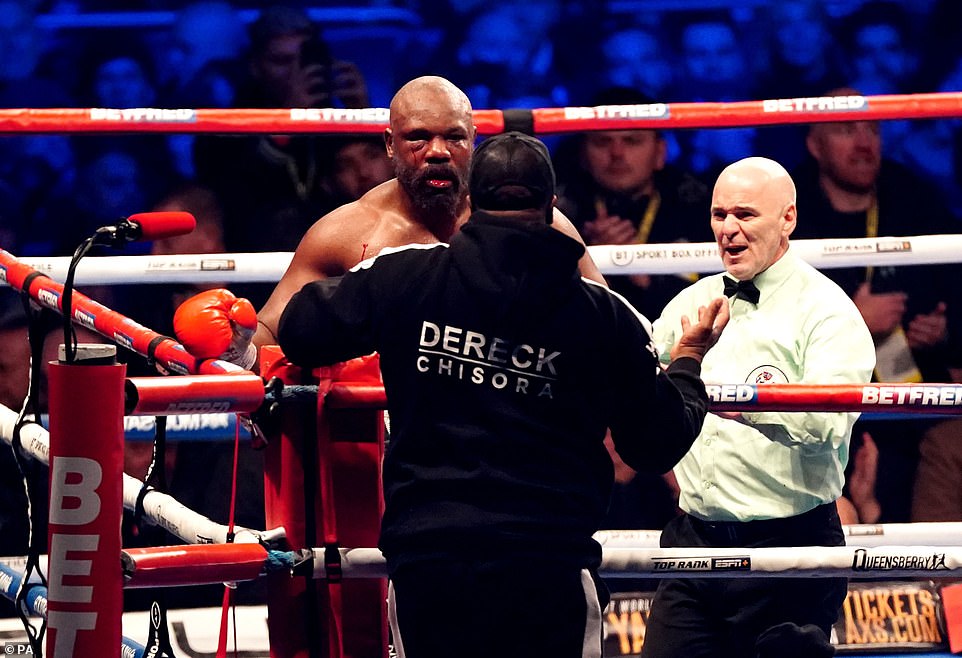 Referee Victory Laughlin eventually ended the contest, with many fans watching on imploring him to do so much earlier

Drivers warned as thick fog descends… before ‘Beast from the East’ sweeps in Siberian...

Emily Ratajkowski and Pete Davidson split! Couple have moved ‘into the friends zone’