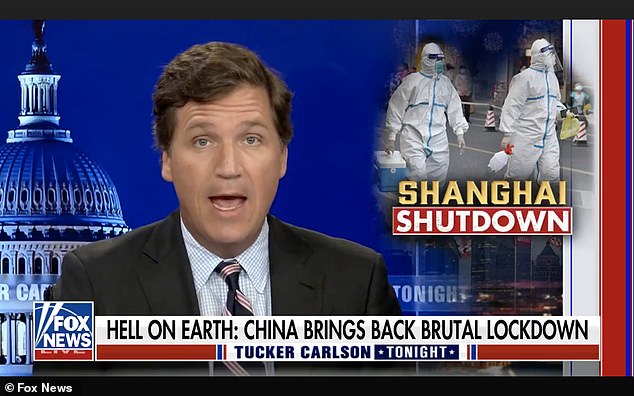 Tucker Carlson on Monday night warned that the COVID-19 lockdown in Shanghai was a dangerous example of what could happen in the United States – telling his viewers: ‘We’re just beginning to see the outlines of the repression that COVID has made possible.’

The Fox News host opened his show with a lengthy segment on the tough policies currently being enforced in Shanghai, as part of China‘s ‘zero COVID’ policy.

The country’s leaders aim to rid their shores of the virus entirely, and as soon as one case is recorded huge swathes of the country are forced into lockdown. Western experts warn it is not sustainable, and footage on social media has shown desperate citizens of Shanghai begging for food. One man’s pet corgi was beaten to death by a health worker after the owner was taken away and put into isolation with suspected COVID.

‘You have 25 million people locked inside their homes,’ said Carlson.

‘You have the largest prison camp in human history.’ 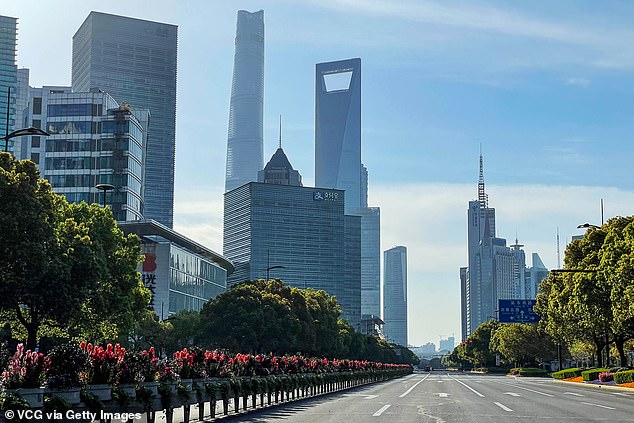 Empty streets in Shanghai on Saturday, amid the city-wide lockdown 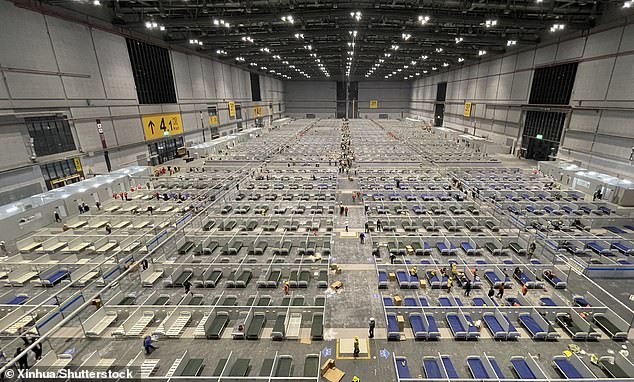 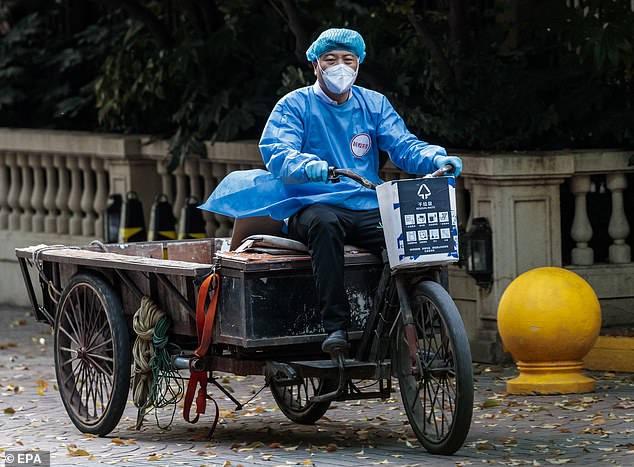 Carlson continued: ‘If you believe in democracy, this is repugnant. Twenty-five million people just lost their most basic human rights.

‘So, the question is, is anyone in the Biden administration, which is constantly lecturing us about democracy and human rights, said anything about this? Has the State Department issued an angry denunciation of Xi Jinping? Is the U.S. government threatening sanctions against China for building the world’s largest prison camp?

He argued that President Xi Jinping’s government was locking the city down not because of the virus, but because it was the freest place in his country, and posed a threat to his authoritarian country.

‘This is again the richest city in China and you never thought you’d see anything like this,’ he said.

‘So the question is: What is going on here?

‘Obviously, it’s not about COVID. Let’s stop pretending. Shanghai does not have a COVID crisis.

‘So, from the perspective of China’s central government, the problem is not COVID. The problem is Shanghai itself.’ 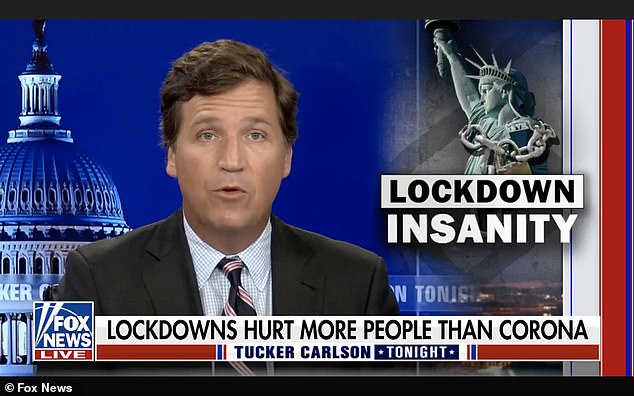 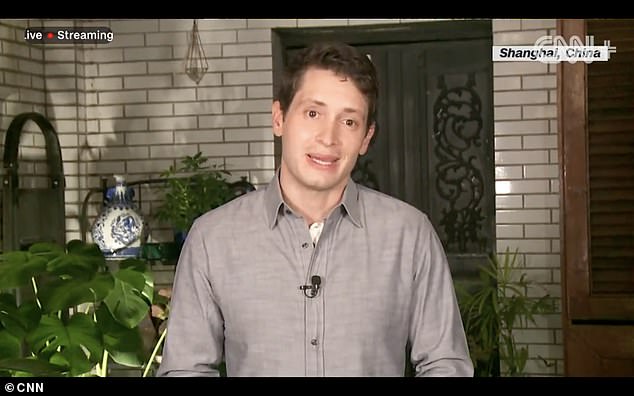 CNN’s David Culver, based in Shanghai, told how he had been locked into his residence

Carlson said Shanghai was singled out because it was independent-minded and home to a large number of international residents.

‘Shanghai is probably the freest place in China,’ he said.

‘It’s certainly got more foreign nationals than any city in China. They’re drawn by the trade that revolves around its historic port.

‘So, by Chinese standards, Shanghai is an independent-minded city, and that’s the problem. For authoritarians, independent mindedness is the main threat.’

On Monday, the city of Philadelphia announced that it was reintroducing its mask mandate – the first major U.S. city to do so.

COVID-19 cases have increased more than 50 percent in the previous 10 days, the city’s Department of Public Health announced on Monday, but numbers remain small.

On April 11, the department said the city was averaging 142 new cases per day. 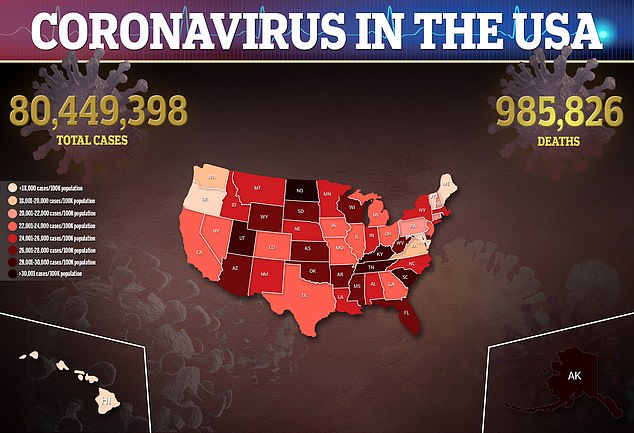 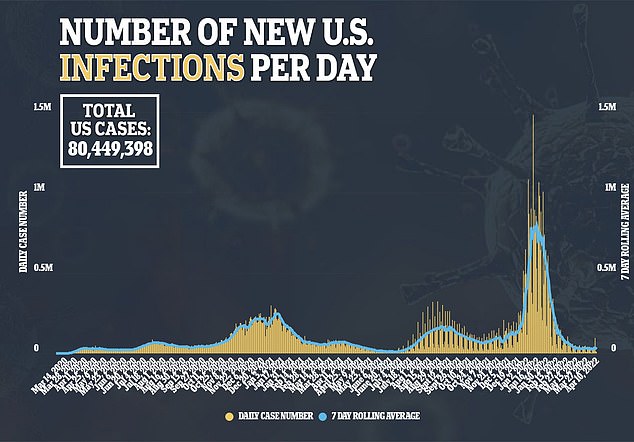 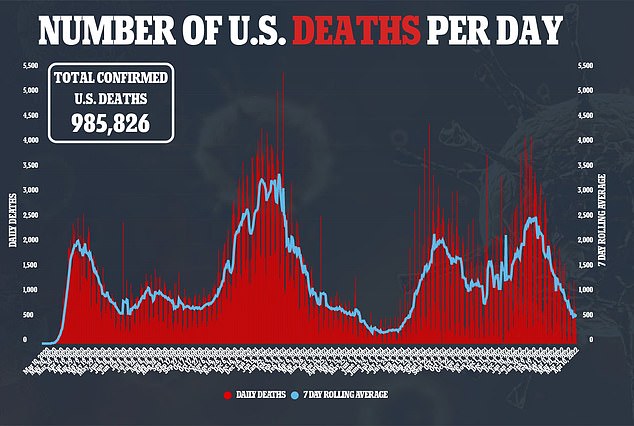 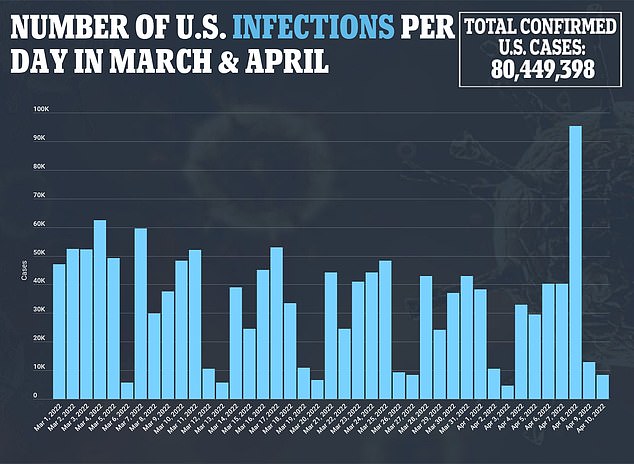 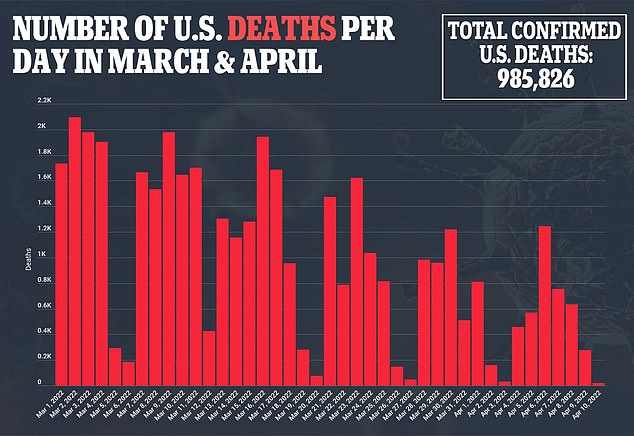 Carlson said that restrictions were being reintroduced to control people.

‘If you watch carefully, you can see all of this taking shape, and why wouldn’t it be taking shape in this country?’ he asked.

He noted that the Biden administration are thought likely to bring back their ‘lunatic vaxx mandate for federal employees’, which was challenged by a Texas judge in January, and then reinstated by a New Orleans appeals court last week.

And he noticed that in Dallas’s Love Field airport, two seven-foot robots known as ‘Security Control Observation Towers’ were being trialled to monitor people within the airport. The robots will alert security if you are not wearing a mask while boarding a flight, or if you are caught parking your car for too long at the curb while picking up a traveler.

‘Now with facial recognition software, the robots could know exactly who the disobedient are,’ Carlson said.

‘We’re just beginning to see the outlines of the repression that COVID has made possible. That’s the point and if we want to know what the future looks like, you can look at China and shiver.

‘In the state of California, the state is starting to pull funding from any school that won’t comply with the new mandate, a vaccine mandate for children.

‘Joe Biden endorses that. Inject your children with a drug with no actual benefits, or no education for your family.’

‘The United States has no higher priority than the safety and security of U.S. citizens overseas, including Mission China’s personnel and their families,’ a U.S. embassy spokesperson said in a statement.

The order came only days after Washington has said all non-emergency employees and family members from the U.S. consulate in Shanghai were allowed to leave, and told Americans to reconsider travel to China because of the ‘arbitrary enforcement’ of virus restrictions. 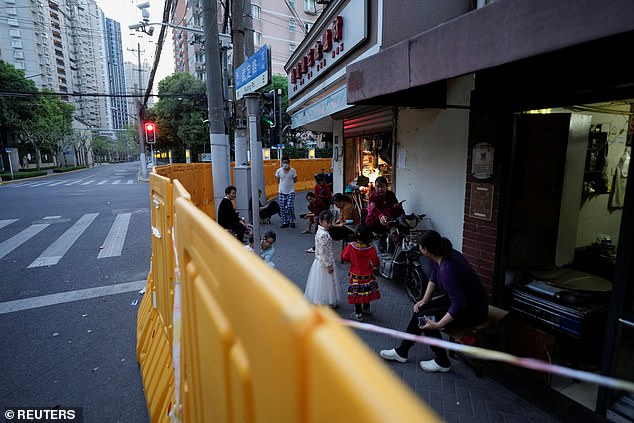 Residents stand behind barricades set around a sealed-off area, during a lockdown to curb the spread of the coronavirus disease in Shanghai, China, pictured on Monday 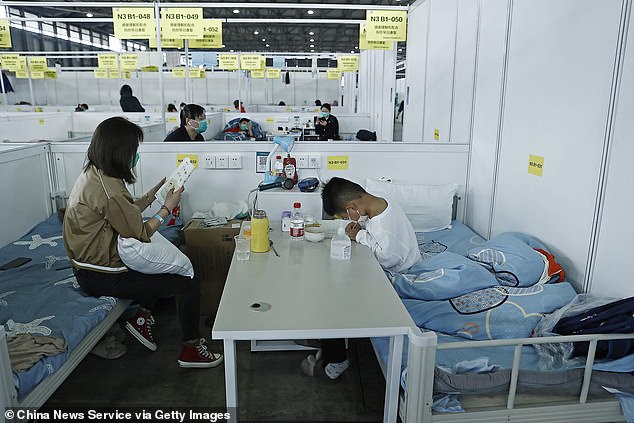 A child is seen accompanied by her mother studies while receiving treatment in the quarantine zone at the Shanghai New International Expo Center this weekend in Shanghai, China 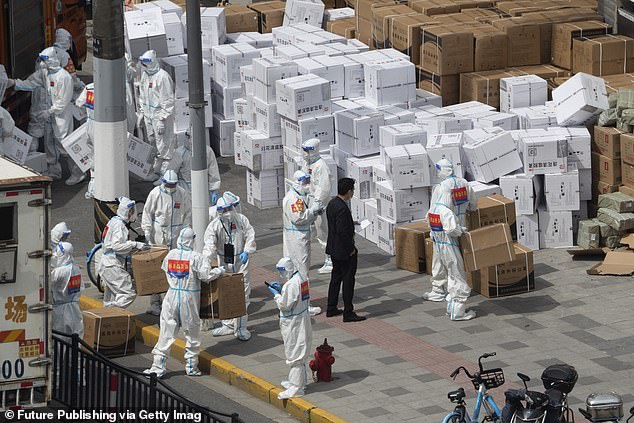 ‘Our change in posture reflects our assessment that it is best for our employees and their families to be reduced in number and our operations to be scaled down as we deal with the changing circumstances on the ground,’ the spokesperson noted.

The departure order will be up for review in another 30 days.

‘Reconsider travel to the People’s Republic of China (PRC) due to arbitrary enforcement of local laws and COVID-19-related restrictions,’ the State Department said in a statement on Monday.

‘Do not travel to the PRC’s Hong Kong Special Administrative Region (SAR), Jilin province, and Shanghai municipality due to COVID-19-related restrictions, including the risk of parents and children being separated,’ the statement said.

Made.com goes into administration with up to 600 jobs lost as high street giant...

Trans skateboarder who claimed first prize from girl, 13, is divorced, ex-Navy, dad of...

New classified report to congress says only HALF of UFO sightings can be properly...