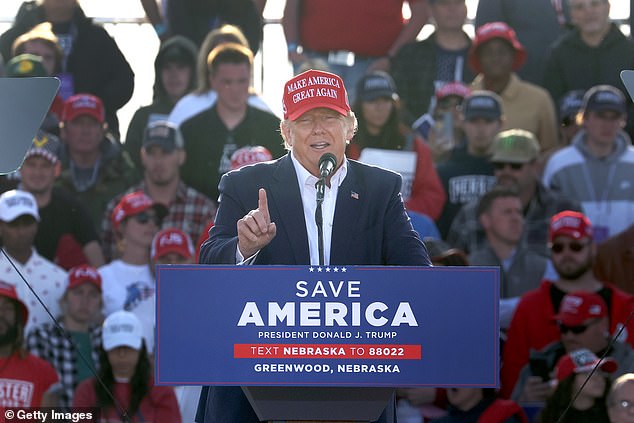 Former president Donald Trump held a rally in Nebraska on Sunday where he spoke for almost two hours as he made the case for voters to elect a Republican gubernatorial candidate who is accused of sexually assaulting several women.

Trump appeared in the city of Greenwood, northeast of Lincoln, together with Charles Herbster a local businessman who is now a Nebraska candidate for governor.

But he also accidentally endorsing the wrong Ohio candidate for Senate during his rant. 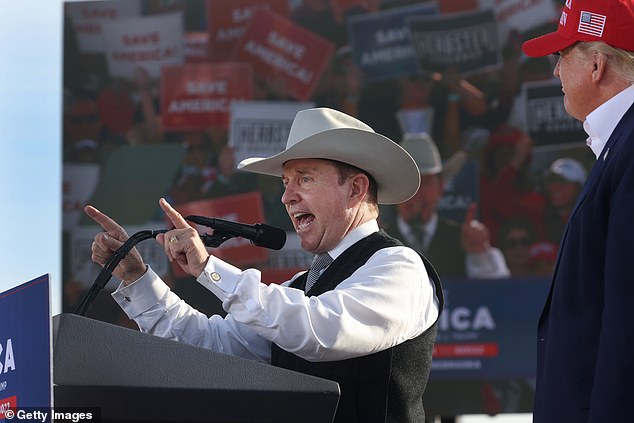 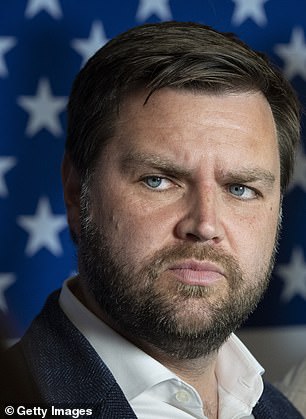 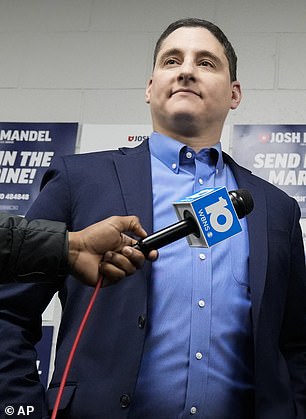 Trump mixed up the names of J.D. Vance, a Republican candidate for U.S. Senate in Ohio, and former State Treasurer Josh Mandel

Venture capitalist JD Vance is running for a senate seat in Ohio, as is former Ohio State Treasurer Josh Mandel.

The rally, held at the I-80 Speedway, was postponed from Friday when storms forced the event to be called off.

Herbster helped to advise Trump on his agricultural policy when he was in office.

Photographs of the two together feature prominently in Herbster’s promotional material.

Herbster also donated to his campaigns. The former president did not hold back on his gushing endorsement.

‘He’s been maligned. He’s been badly maligned and it’s a shame. That’s why I came out here. I defend people when I know they’re good. He’s a good man. He was with us from the beginning. He’s been my friend for 30 years, he’s an innocent human being.’

Trump’s endorsement of Herbster, who has never held public office, is seen as another example of the former president taking a gamble on an ultra-loyalist, rather than better connected opponents.

But it could be enough to turn Herbster into a real contender in a state that heavily backed Trump in 2020.

‘Charles W. Herbster has been a tremendous supporter of America First and Make America Great Again, right from the beginning,’ said Trump in his endorsement.

‘He is running for governor of the great state of Nebraska and will do a fantastic job.

‘A proud native of Nebraska, Charles is an extraordinarily successful businessman who will fight for our farmers and ranchers, support our military and vets, and protect and defend your under siege Second Amendment rights.’ 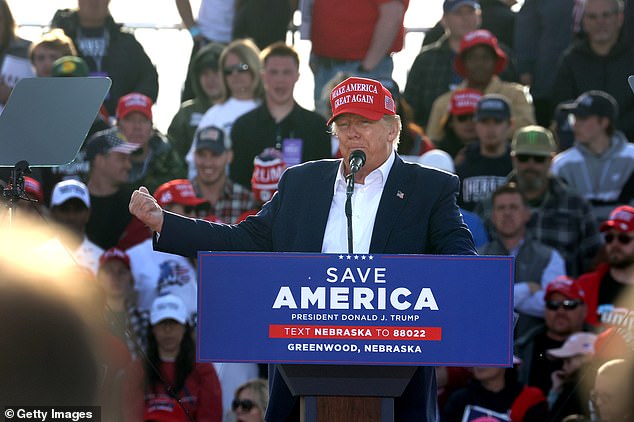 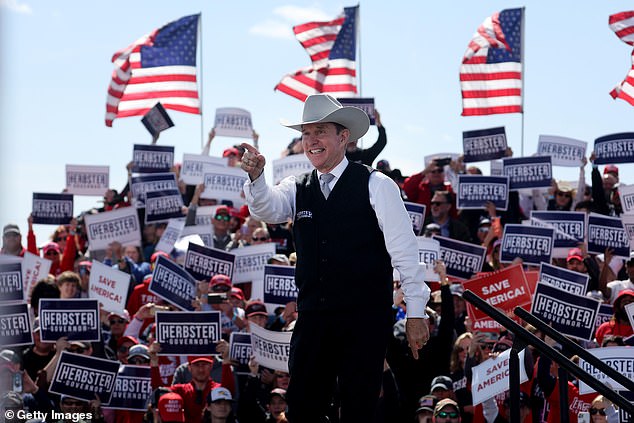 Trump made the case for voters to elect a Republican gubernatorial candidate, Charles Herbster, who is accused of sexually assaulting several women. He is pictured at Sunday’s rally

Last month, the Nebraska Examiner reported how eight women, including a state senator, accused Herbster of touching them inappropriately as well as groping.

Several women told the paper that Herbster touched them inappropriately as they attended a meet and greet and posed for a photograph.

Republican State Senator Julie Slama, alleged how Herbster reached up her skirt touching her inappropriately and without consent as she walked by him in a crowded ballroom in 2019.

A former aide to a state senator, Elizabeth Todsen, alleged Herbster grabbed her buttocks at the same event. 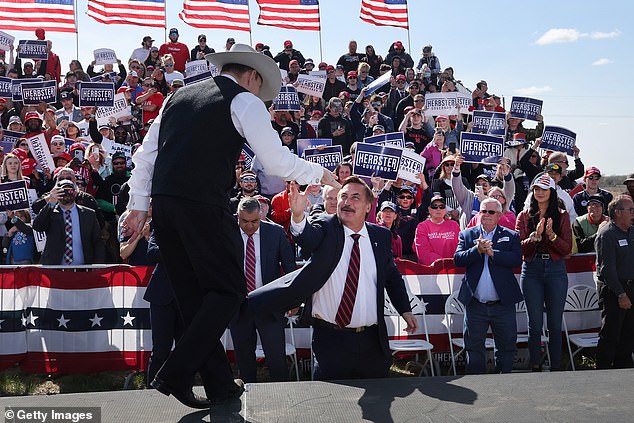 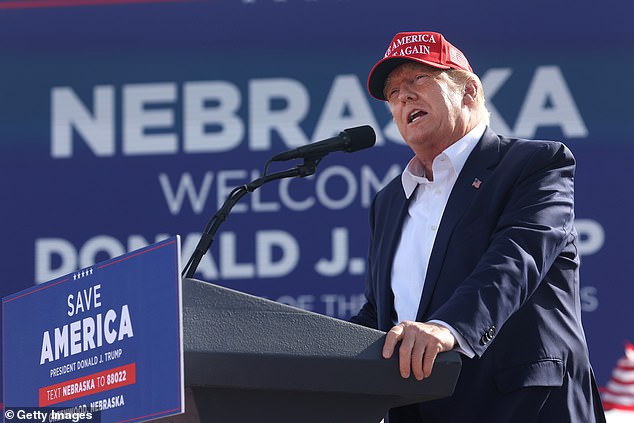 Before Trump spoke, Herbster took to the stage took a moment to address the allegations suggesting they had come about because the ‘political establishment’ did not want him to win.

‘They are trying to scare me out of this race and it’s not going to happen. We are going to take back Nebraska,’ Herbster said.

Herbster has released a series of television ads denying the accusations.

‘I respect all women, all females across this land,’ Herbster said. ‘The number of calls and text messages and prayers coming in to me has been absolutely overwhelming.’

Herbster’s campaign mirrors a line used by Trump as he promises to ‘make Nebraska great again’.

Herbster took to the stage on Sunday speaking for around half an hour on several topics, including critical race theory.

Herbster promised that he will ensure the controversial topic will not be taught in Nebraska universities.

The gubernatorial candidate also outlined his position on illegal immigration.

Herbster said he welcomes immigrants so long as they enter the United States legally.

Herbster also talked about China and said he will not allow the country to buy land in the Cornhusker State.

He also said he plans to ensure election security in Nebraska. 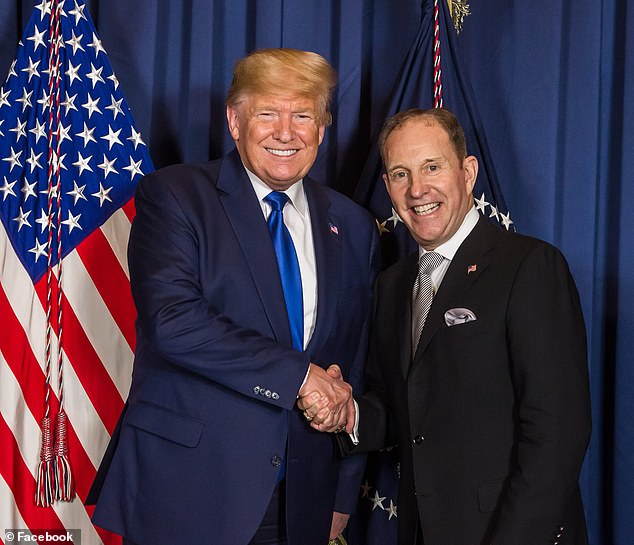 Speaking of the groping allegations, Herbster said the accusations ‘lack even a shred of credibility’ and have damaged his reputation

One of Herbster’s email addresses was among millions dumped online by hackers who accessed accounts of users of Ashley Madison, a website that advertised itself as catering to married people looking to have discreet affairs

Last month it was revealed how an email address linked Herbster was used to set up an account on the cheating website Ashley Madison.

The address was among millions released by hackers in 2015.

The revelation will increase scrutiny of Herbster’s troubled campaign.

Speaking of the groping allegations, Herbster said the accusations ‘lack even a shred of credibility’ and have damaged his reputation.

Herbster, a wealthy cattle breeder and loyal Trump ally, launched his candidacy last year and used the email address charles@herbsterangus.com on his official filing with the Nebraska secretary of state.

The same address was in the huge trove of Ashley Madison data dumped online by hackers, according to an independent analysis conducted by a cybersecurity expert for DailyMail.com. 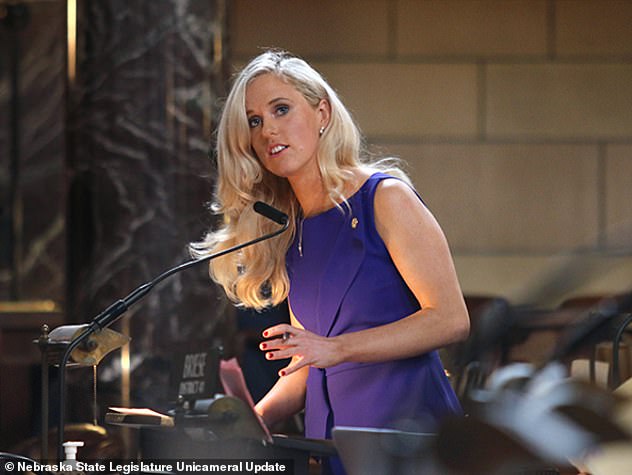 Earlier this month, Nebraska State Senator Julie Slama accused Herbster of putting his hand up her skirt at a public event. Herbster denies the accusation and has launched legal action

Log-on information associated with the Herbster email address shows the account was accessed from an IP address linked to Verizon Wireless, at a location that corresponds to Kansas City International Airport.

Among Herbster’s business interests is Conklin Company, which manufactures more than 130 products, including roofing and agriculture products, such as fertilizers and motor oil, and has its administrative offices in Kansas City, Missouri.

He also owns Herbster Angus Farms, a cattle breeding business. In 2019 he spent a record $1.5m on an Angus bull.

Proving who used particular email addresses, and whether the user signed up for an Ashley Madison account, is notoriously difficult.

But the charles@herbsterangus.com address is listed in connection with Herbster Angus Farms in directories, as well as documents used to file his run for governor.

Herbster has been married twice, and his second wife Judith died in 2017.

The details will raise fresh questions for Herbster, whose campaign makes much of his born-again Christian credentials, business experience and relationship with Trump.

His campaign did not respond to multiple requests for comment until after this story was published.

‘This is clearly another attempt by the fake news to smear Charles,’ said spokesperson Emily Novotny.

‘Charles 100% denies ever using Ashley Madison or creating an account.’ 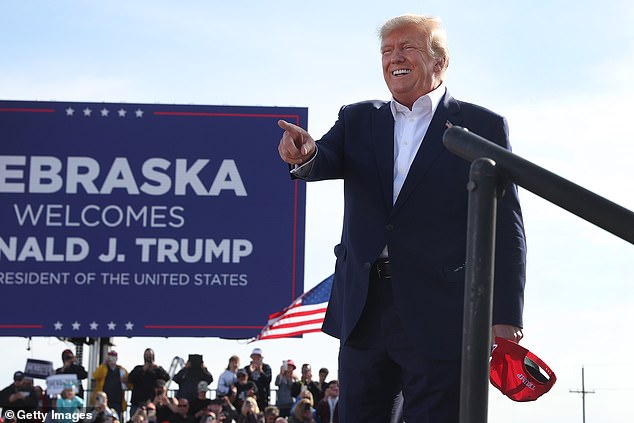 The outgoing Republican governor Pete Ricketts has said Herbster would a ‘terrible’ choice and has thrown his weight behind rival candidate University of Nebraska regent Jim Pillen.

The rally also saw the participation of two conservative activists who have continued to falsely claim the 2020 election was rigged and stolen from Trump, MyPillow chief executive Mike Lindell and Republican activist David Bossie.

Trump appeared onstage at the rally for almost two hours and went through a ‘greatest hits’ of talking points. 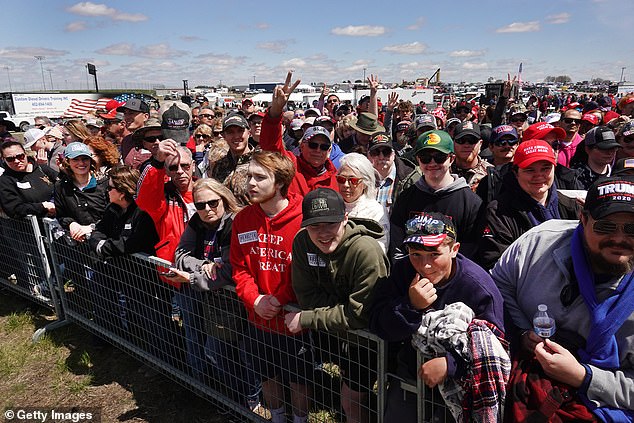 Around 2,000 people gathered to hear the former president speak on Sunday afternoon

While speaking about the pandemic Trump he took a moment to mock Chief Medical Advisor Anthony Fauci and his flip-flopping on face masks.

He noted how he did the right thing by supporting Republican governors who decided to keep their states open rather than enforce lockdowns.

‘It’s the China Virus, whether we like it or not,’ he told the crowd. ‘I was also right about Wuhan [the Wuhan lab]….I think I was right about everything.’

Trump referred to the coronavirus as the ‘China Virus’ during his time in office including the  Wuhan lab in China where some believe it originated.

At the time, critics bashed the 45th president for referring to it as the ‘China’ virus but Trump appeared emboldened as he revived the nickname on Sunday eliciting laughter and cheers from the crowd.

‘On Covid, we had tremendous success. I rejected mandates, I rejected unscientific lockdowns…and I fought to get our children back into schools.’ He added, ‘[The Democrats are] the party of disinformation…almost everything they say is false.’ 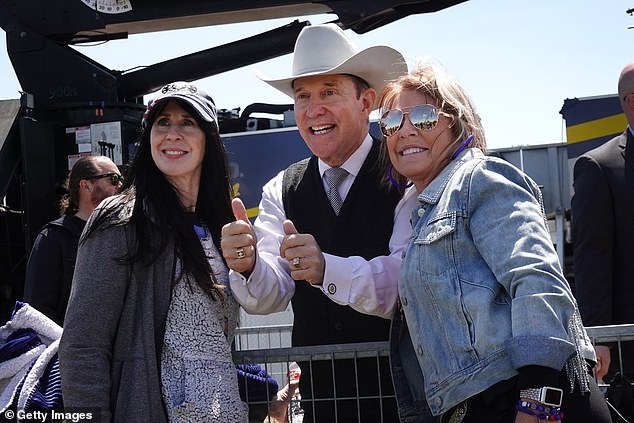 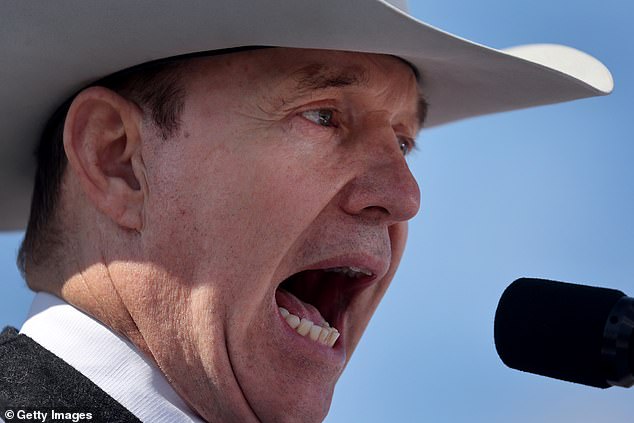 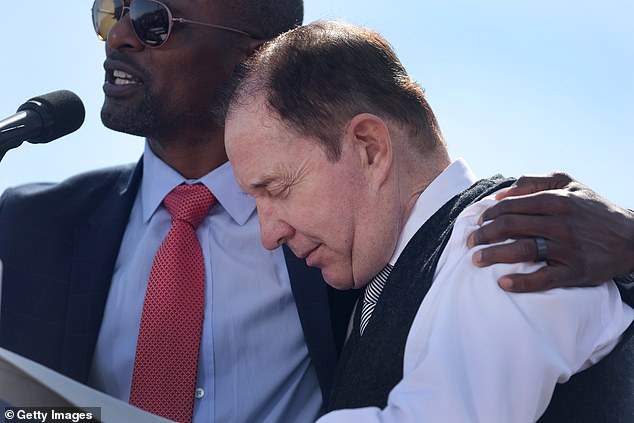 He got the crowd chanting ‘Joe’s gotta go’ as he criticized the Biden’s administration’s handling of the war in Ukraine.

‘This could be a very dangerous thing where we have incompetent people running things. I never realized how important being president was until we have someone who goes over to Europe and embarrasses our country.’

‘Joe Biden and the radical left have turned calm into chaos, competence into incompetence, stability into anarchy, prosperity into poverty and security into catastrophe, otherwise they’re doing a fantastic job.

Trump then went on to attack Joe Biden’s cognitive state during the energetic rally.

He called on Biden to ‘put the question to rest by taking a cognitive test.’ 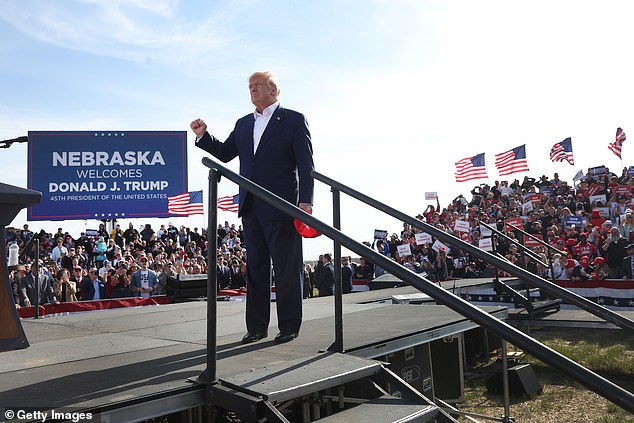 ‘Just look at the video of Joe Biden attempting to speak last week very tough to Russia and Putin,’ he began as he played a clip of Biden stumbling over his words and appearing confused.

‘We have a president right now, sadly, who has absolutely no idea what the hell is happening. He’s shaking hands with the air; he’s walking around somewhat bewildered.

‘What a mess this country’s in…but we’ll turn it around…I just hope it’s not too late in some respects,’ Trump mused.

Getting back on track, Trump returned to the remarks written in his teleprompter.

‘The election was rigged and stolen. Such stupid decisions are being made because of it, including the border, including Afghanistan.

‘Our movement must continue to pursue a populist and nationalist economic agenda that puts working families before globalist politicians, that are fools, and corrupt multinational corporations,’ Trump said to cheers at one point. 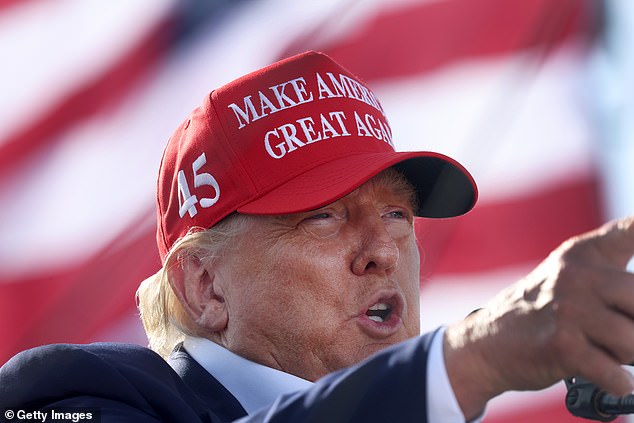 Trump shared his thoughts on voters and elections in California calling the Golden State a ‘winnable state.’

‘You know, you take California. I think we do much better in California…you know they all say that you lose by, automatically, by millions of votes. I don’t believe that.

‘I went to California for just one rally…I never saw a crowd like that…this crowd was massive,’ Trump explained. 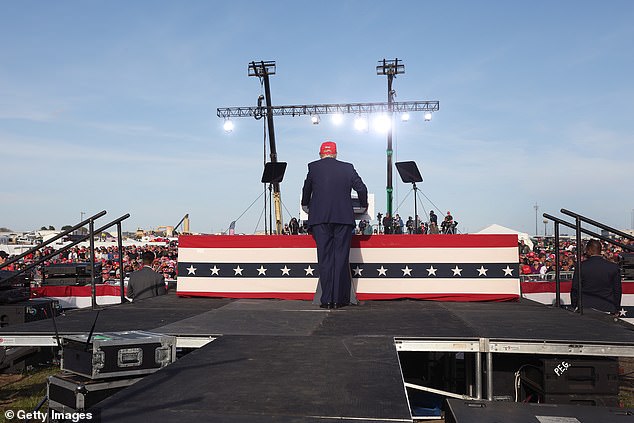 Former President Donald Trump is seen speaking to supporters during a rally in Greenwood, Nebraska 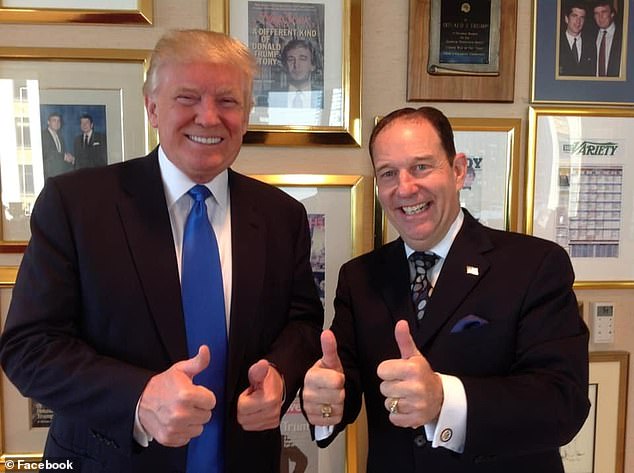 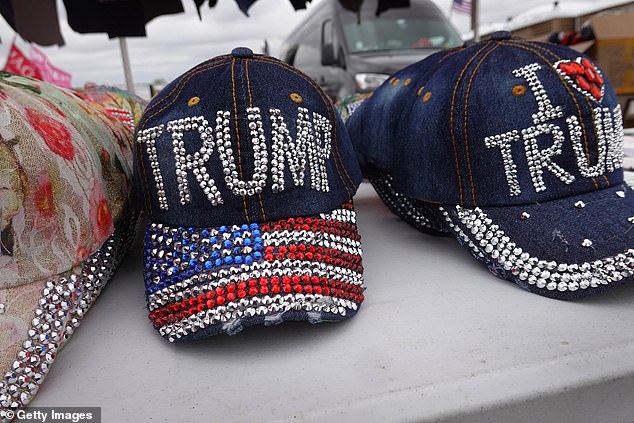 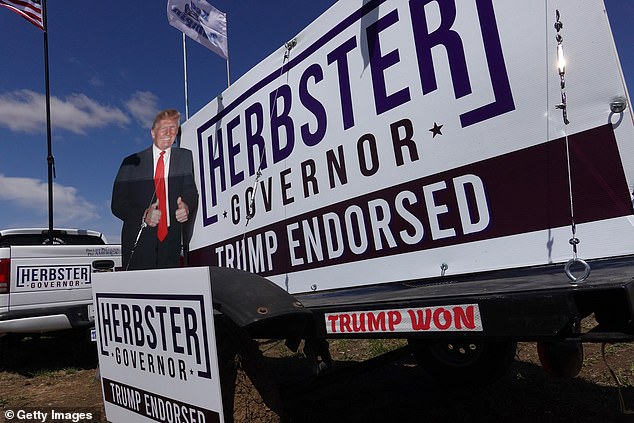