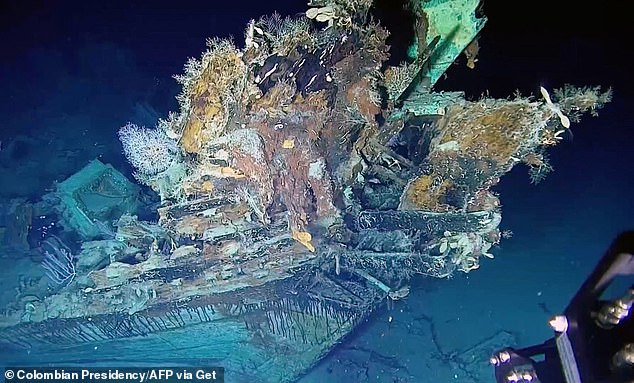 The treasures of the legendary San Jose galleon shipwreck have been revealed in a series of ‘unprecedented’ underwater images.

Cannons, porcelain crockery, and gold pieces have been preserved deep in the Caribbean Sea for 300 years.

The San Jose galleon, thought by historians to be carrying treasure that would be worth billions of dollars in today’s money, sank in 1708 near Colombia’s Caribbean port of Cartagena.

A part of the bow can be clearly seen covered in algae and shellfish, as well as the remains of the frame of the hull.

The Colombian army has revealed images of the wreck of the San Jose galleon, one of the largest of the Spanish Navy, sunk 300 years ago with its treasure off the Caribbean coast

A remotely operated vehicle reached a depth of almost 3,100 feet (950 metres) allowing new videos of the wreckage. Operators found the found it untouched by ‘human intervention’ 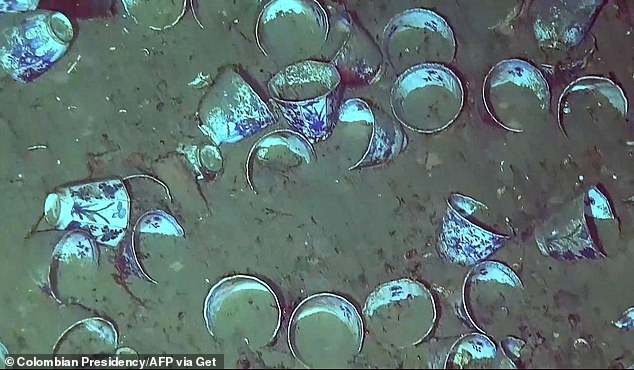 The vehicle was operated by naval officials conducting underwater monitoring, who also discovered two other nearby wrecks during the four missions.

These were a colonial-era galleon and a schooner thought to be from around the same period as Colombia’s war for independence from Spain about 200 years ago.

Navy commander Admiral Gabriel Perez said: ‘We now have two other discoveries in the same area, that show other options for archaeological exploration,

‘So the work is just beginning.’

The images offer the best-yet view of the treasure that was aboard the San Jose – including gold ingots and coins, muddy cannons made in Seville in 1655 and an intact Chinese dinner service.

Porcelain crockery, pottery and glass bottles can also be seen.

Archaeologists from the navy and government are working to determine the origin of the plates based on inscriptions, the officials said.

The images offer the best-yet view of the treasure that was aboard the San Jose – including Porcelain crockery, pottery and glass bottles

The vehicle that videoed the treasures  was operated by naval officials conducting underwater monitoring, who also discovered two other nearby wrecks during the four missions 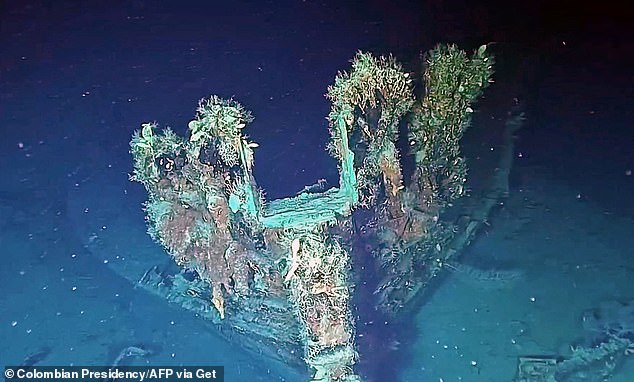 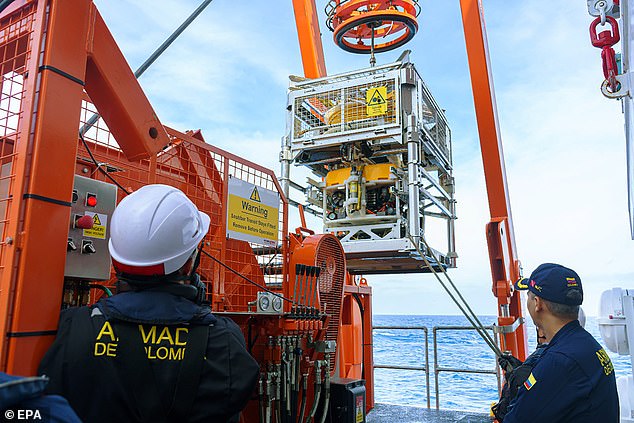 The equipment used for searching of the remains of the galleon San Jose submerged almost 3,100 feet under the Colombian Caribbean Sea. It was operated by naval officials 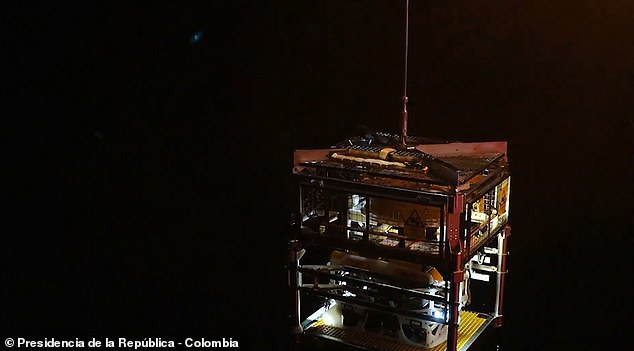 WHAT WAS FOUND IN THE SHIPWRECK?

The president said: ‘Thanks to the technological equipment and the Colombian navy’s work, we managed to capture images with a level of precision that’s never been seen before.’

He added: ‘The idea is to recover it and to have sustainable financing mechanisms for future extractions.

‘In this way we protect the treasure, the patrimony of the San Jose galleon.

He also mentioned the wreck was ‘kept intact and protected with a view towards a future retrieval’.

Colombia will likely face a challenge from Spain and an indigenous group in Bolivia to determine who keeps the bounty.

Spain insists that the treasures are theirs since it was aboard a Spanish ship, while Bolivia’s indigenous Qhara Qhara nation say the Spanish forced the community’s people to mine the precious metals, so the treasures should belong to them.

However, Colombia considers wrecks found in its territorial waters to be part of its cultural heritage, meaning the contents cannot be sold. 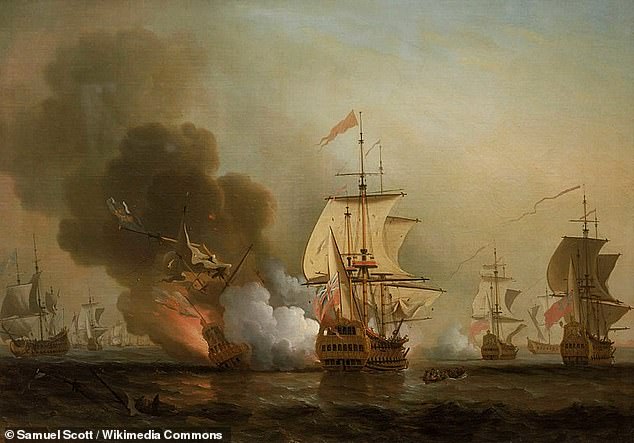 The San Jose galleon was owned by the Spanish crown when it was sunk by the British navy near Cartagena in 1708, and only eleven of its 600-strong crew survived

The San Jose galleon was owned by the Spanish crown when it was sunk by the British navy near Cartagena in 1708, and only 11 of its 600-strong crew survived.

It was heading back from the New World to the court of King Philip V of Spain, and was laden with what was believed to be at least 200 tons of gold, silver and emeralds.

When the wreck was discovered in 2015 by the Woods Hole Oceanographic Institution, then Colombian president Juan Manuel Santos proposed to initiate a recovery mission, financed by selling part of the bounty.

However the current president halted the mission to ensure the entirety of the wreck would remain in his country.

Whenever it takes place, the recovery of the ship will be a challenge due to its significant depth underwater.

Authorities have since announced they intend to create a museum of shipwrecks with the San Jose galleon and other wrecks found off the coast of Colombia.

WHAT WAS THE SAN JOSE GALLEON AND WHY DID IT SINK?

It was one of many Spanish galleons that made trips between Europe and the Americas between the 16th and 18th Century.

When it sank, the San Jose was transporting plundered gold, silver, emeralds and other precious stones and metals from the Americans back to Spain.

This wealth was helping finance Spain’s war of succession against Britain.

The ship gained a reputation as the ‘holy grail’ of shipwrecks and was carrying one of the most valuable hauls of treasure ever lost at sea – worth around £12.6 billion ($17 billion).

It was found submerged off the coast of Baru in what is now Colombia, near the Rosario Islands by a team of international experts, the Colombian Navy and the country’s archaeology institute.

Why did it sink?

The San Jose was tracked down 16 miles (26km) off Cartagena by English Commodore Charles Wager from the Royal Navy on 8 June 1708.

Sources say that Wager initially planned to take control of the Spanish ship’s crew and cargo.

However, the powder magazines on San Jose detonated, destroying the treasure-laden ship before it could be captured.

Most of the 600 souls aboard perished when the vessel sank.

The British prevented the Spanish fleet from transporting the gold and silver to Europe in order to fund further war efforts but the loot would have been vast if they had managed to capture the ship.

Chris Hemsworth packs on the PDA with wife Elsa Pataky at AACTA Awards in...