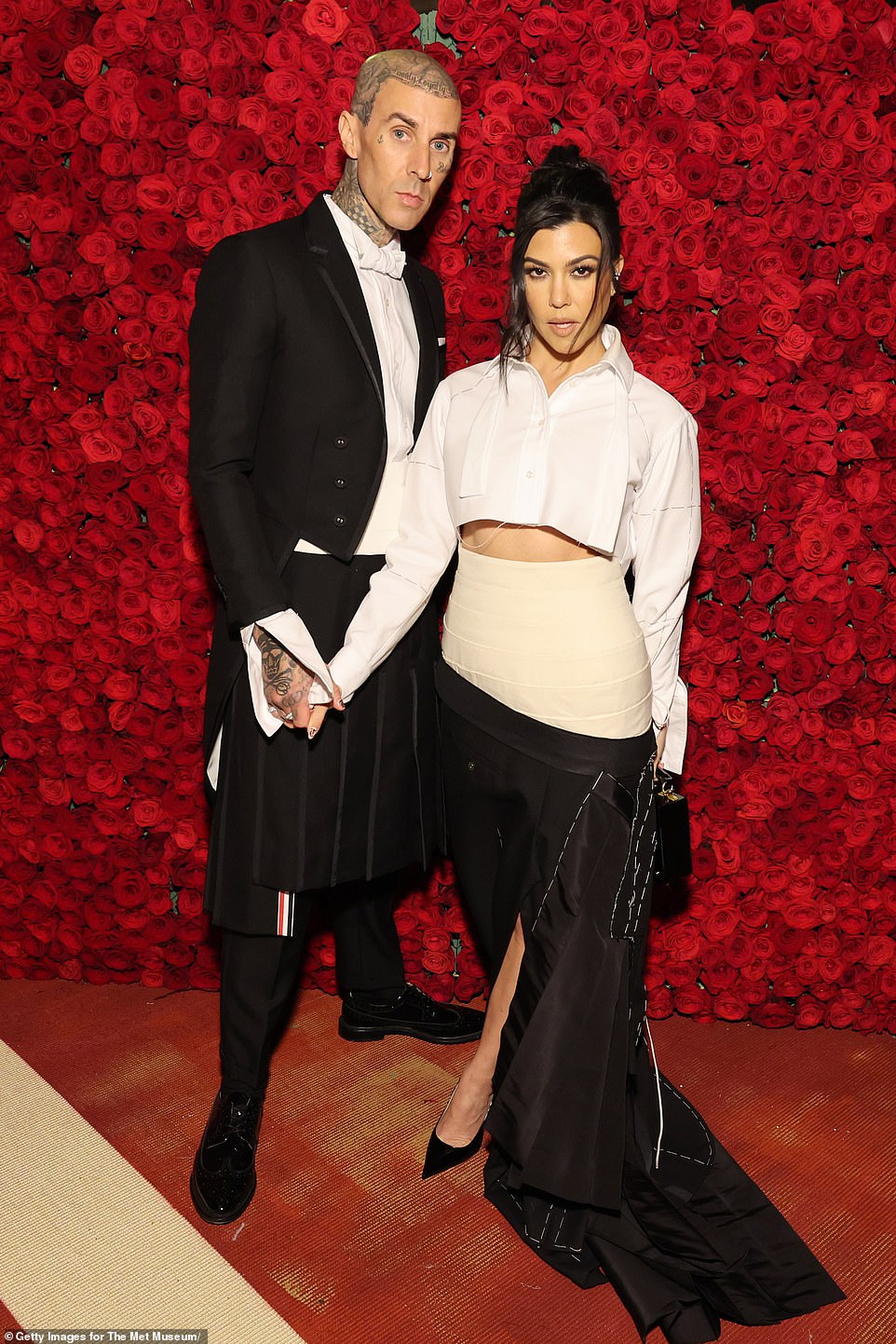 Revealed: Travis Barker, 46, was ‘hospitalized for pancreatitis’ after undergoing colonoscopy… as he remains under medical care with wife Kourtney Kardashian by his side in LA

Travis Barker was ‘hospitalized for pancreatitis’ after undergoing colonoscopy, it has been revealed.

The 46-year-old Blink-182 drummer is currently still under medical care with wife Kourtney Kardashian by his side at Cedars-Sinai Medical Center in Los Angeles, California.

Doctors are said to believe that his pancreatitis, which is an inflammation of the pancreas, was triggered by a colonoscopy, TMZ reports.

Sources tell the site that Barker underwent the colonoscopy exam recently, which is usually performed to look for changes such as swollen, irritated tissues, polyps or cancer, in the large intestine.

Treatment will usually require hospitalization and can start suddenly and last for days, or in some cases occur over many years. The condition can also be caused by gallstones or chronic and heavy alcohol use.

Revealed: Travis Barker was ‘hospitalized for pancreatitis’ after undergoing colonoscopy as he remains under care with wife Kourtney Kardashian by his side

Symptoms of pancreatitis include upper abdominal pain, nausea, and vomiting.

The star was taken to a Los Angeles hospital by ambulance on Tuesday after suffering from the medical issue, with his new wife Kourtney by his side as he arrived at local facility West Hills.

He was later transferred to Cedars Sinai Medical Center in an ambulance – while Kourtney, 43, followed behind in her Range Rover.

The reality star was then pictured walking into the hospital alongside her husband who was being wheeled into the facility on a gurney. 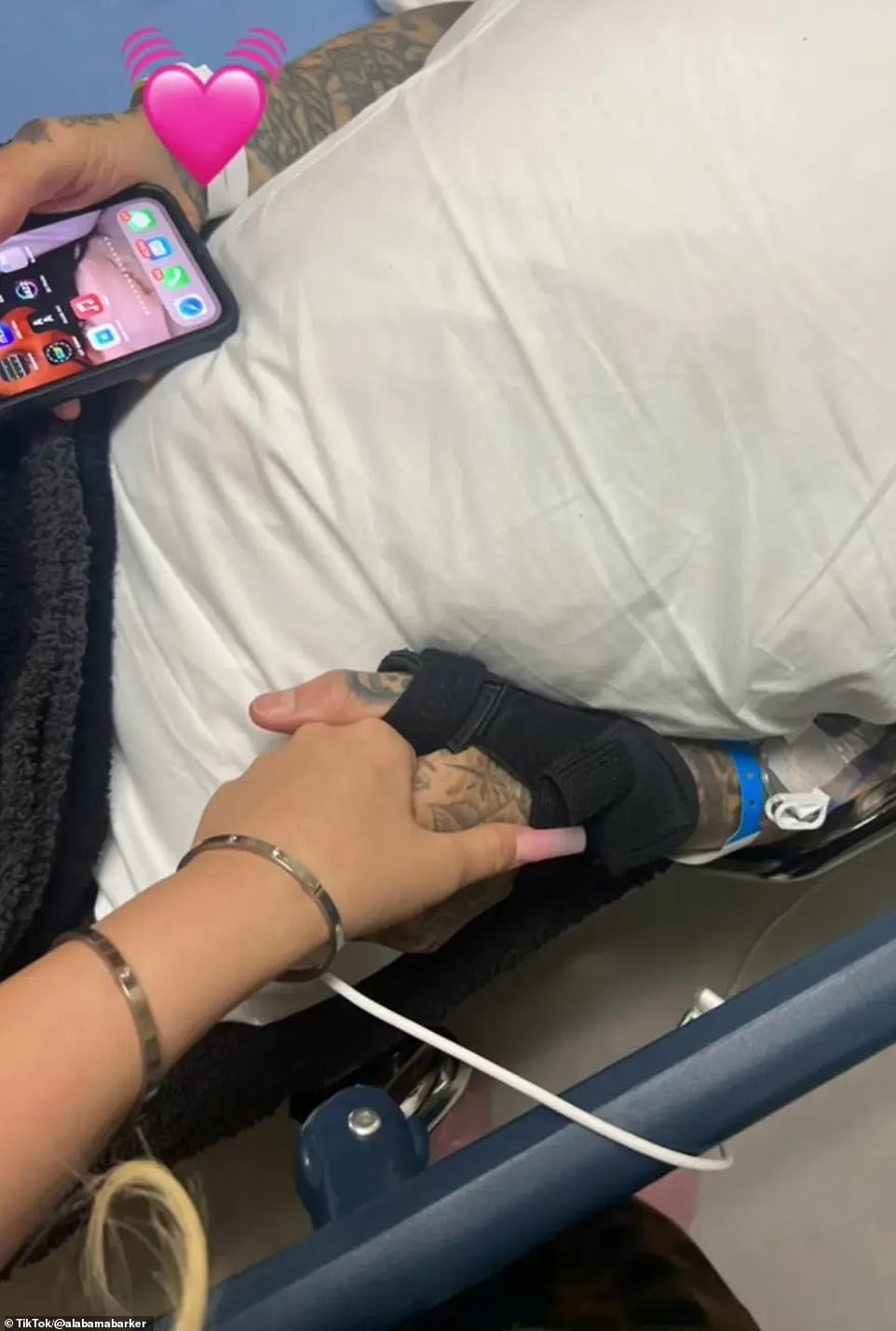 Hospitalized: Travis Barker ‘s daughter Alabama, 16, has shared a photo of the rocker in hospital, hours after he was rushed in with a mystery illness

Travis was seen lying on the gurney while wearing an all-black outfit, the hood of his sweatshirt raised over his head, with his distinctive tattoos visible on his right hand, which was raised in the air as he was wheeled into the hospital by EMTs.

Kourtney was also dressed in all-black and had her hood up over her hair, her face shielded from the public.

Barker also cryptically tweeted, ‘God save me,’ at 10:45 AM PST on Tuesday morning prompting huge concern among fans before his condition was revealed.

Hours later, Barker’s daughter Alabama took to her Instagram Stories to ask his fans to ‘Please send your prayers’, adding a sad emoji – indicating that her father’s condition may be quite serious. 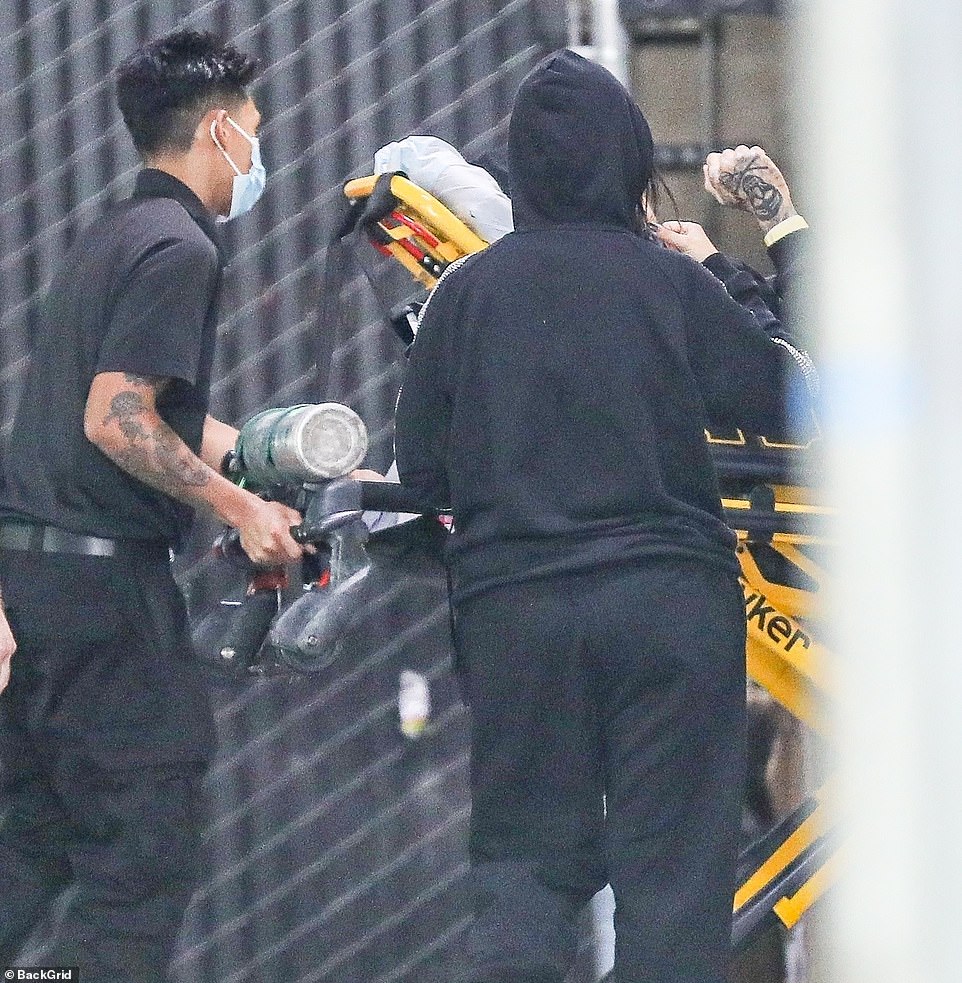 Save: Barker had cryptically tweeted ‘God save me,’ at 10:45 AM PST on Tuesday morning, before it was revealed what he had been hospitalized for

Prayers: Barker’s daughter Alabama, 16, took to her Instagram Stories to ask that her followers ‘Please send your prayers’ alongside a sad emoji on Tuesday prompting concern among fans

Johnny Depp is heard arguing with Amber Heard in audio played in court as...

How to Design Engaging Custom Rigid Boxes for Customers