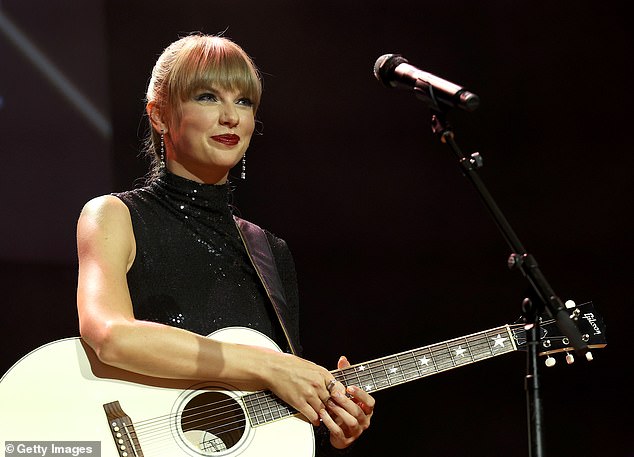 Taylor Swift fans have been left devastated after Ticketmaster glitches stopped them from getting hold of pre-sale tickets to the pop superstar’s upcoming Eras tour.

The highly anticipated sale of tickets took place on Tuesday morning as lucky fans who had received a code to use the company’s Verified Fan program logged on to try and bag their seats.

However, many were soon venting their frustration and devastation on social media as the Ticketmaster site crashed before sales began and froze during transactions, leaving many unable to claim their tickets because of the ticketing site’s ‘screw up’.

One angry fan tweeted: ‘Leave it to @Ticketmaster and @TMFanSupport to completely screw up the #TSTheErasTour #TSErasTour presale for @taylorswift13 and @taylornation13 . Sending broken codes and constant 500 errors. You KNEW this s**t would be big and you STILL screwed it up.’

Another wrote: ‘F**k you ticketmaster I was about to check out my tickets for Taylor swift and you glitched and sent me to the very back of the que and now I’ll probably never get tickets. Thank you so much for not doing what you were literally designed to do.’

‘Nevermind the fact that this @taylorswift13 ticket roll out was a complete disaster, the prices of these tickets are OUTRAGEOUS (if you can even get to the check out part),’ one furious fan added.

Many continued to complain of not being able to access the site at all, while others faced a litany of issues including the website denying accounts are verified.

Some took to TikTok to plead for help from fellow music lovers as they were left in despair over the site’s glitches.

User arieljann looked tearful in a clip she shared as she said: ‘Can somebody help me? I did the verified pre-sale code ticket for Taylor Swift and when I tried to use the code it told me that the code wasn’t linked to the sale.

‘I did it over and over again, I went through the email and I made sure everything was right… I tried call Ticketmaster and I can’t get through… I’m super bummed out, someone help.’

Ticketmaster also temporarily delayed the presale, while many fans online said the site still showed 2,000+ people ahead of them after hours in the seemingly unmoving virtual queue.

‘Sorry for the inconvenience. It should be back up and running shortly. To keep your place in line, please don’t refresh or close your browser,’ the error message read.

The company added that fans should access the tickets through the link provided in the presale email sent on Monday, and not to try to access them through the Ticketmaster homepage.

One fan wrote: ‘So has anyone actually got Taylor swift eras tour tickets? Or is everyone still in the death line on Ticketmaster? Asking for a friend…the friends me and I have 20 minutes until I freak out!’

Another joked: ‘I would literally rather be in the hunger games & die at the end than be in this Ticketmaster waiting room, but here I am @taylorswift13’

Elsewhere, tweets from incensed social media users indicated they were unable to access the website to buy the tickets and their codes did not work and let them purchase.

One fan tweeted: ‘I HAD 17 PEOPLE AHEAD OF ME IN QUEUE AND TICKETMASTER BOOTED ME OUT OF QUEUE IM GONNA SCREAM I HAVE TO WAIT FOR 2000 + PEOPLE AGAIN AHHH WTF #erastour #taylorswift #taylornation.’

Another raged: ‘@taylorswift13 @Ticketmaster @TMFanSupport I did everything i was supposed to do to become a verified fan, received my code, and got in the waiting room 30 mins early. Now it is saying im not a verified fan. PLEASE HELP

‘#Ticketmaster – I had #taylorswift tickets IN my cart – I got a different error. 5 times. And then I got kicked out for trying too many times? Come on,’ one annoyed fan added.

Those who were able to access the tickets on StubHub reported the lowest priced tickets hovered around $250 at some shows, while others, including at MetLife Stadium with Phoebe Bridgers, skyrocketed to over $12,600. 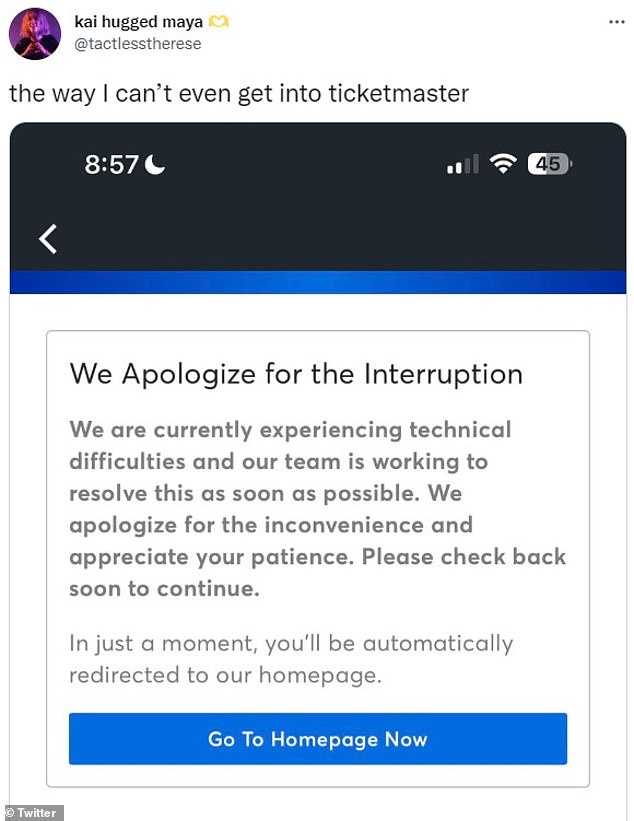 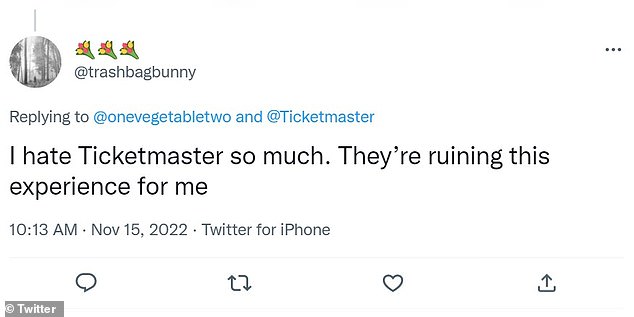 The Eras tour will have over 50 shows and will feature joint performances with other stars including Phoebe Bridgers, Paramore and HAIM.

Swift has released four albums and re-recorded two albums since her last tour in 2018, which has driven fan excitement through the roof.

‘No excuse for Ticketmaster. They have chosen to become this ridiculous monopoly & had months to prepare,’ said one social media user.

‘Ticketmaster’ quickly trended on Twitter after people reported the site was down at around 9 am.

Even streaming giant Netflix joined in on the fun, and tweeted ‘they’re all waiting in a ticket queue right now’ in response to a post about the Earth’s population reaching 8 billion.

Earlier this month, Swift said she was in ‘shambles’ when she tweeted about becoming the first artist in music history to claim the entire Top 10 of the Billboard Hot 100 songs chart.

The multi-platinum superstar has been taking pop culture by storm with the blockbuster release of her 10th studio album called Midnights ever since it dropped on October 21.

The 32-year-old singer-songwriter recently added 17 shows to her already jam-packed schedule for next spring and summer.

Swift is starting the tour a day earlier than originally planned on March 17 in Arizona and ending it four days later than planned on August 9 in Los Angeles.

One fan even had to be rushed to the hospital with a collapsed lung after becoming too excited about the singer’s tour announcement. 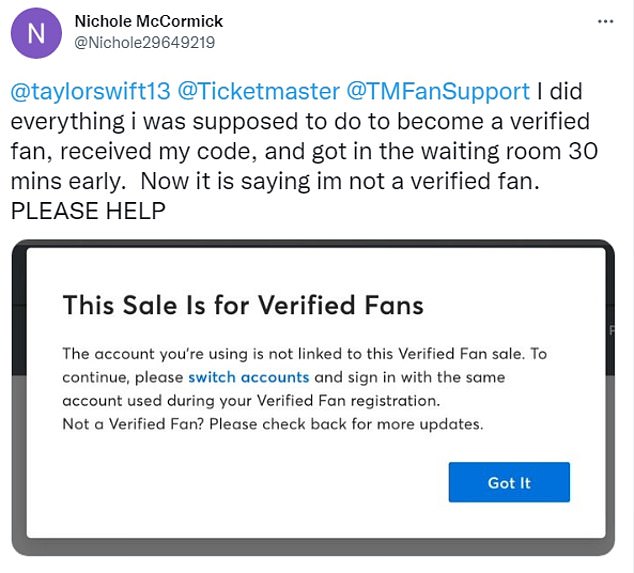 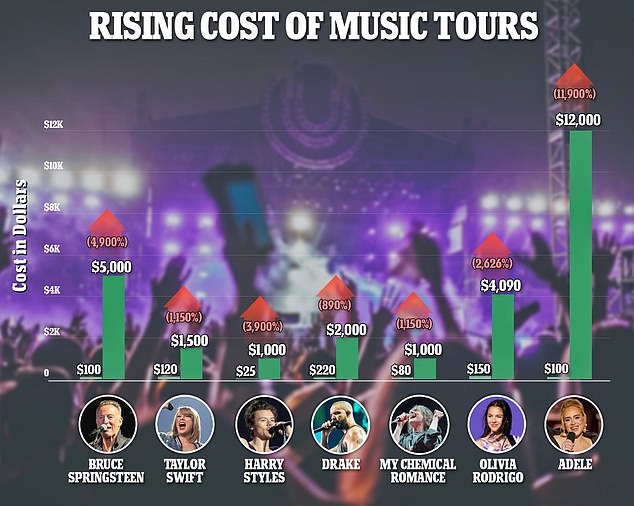 Sky-high: The cost of ticket sales for major artists’ concerts have sky-rocketed of late – with the cost of entrance to many big stars’ gigs going up by more than 1,000 per cent 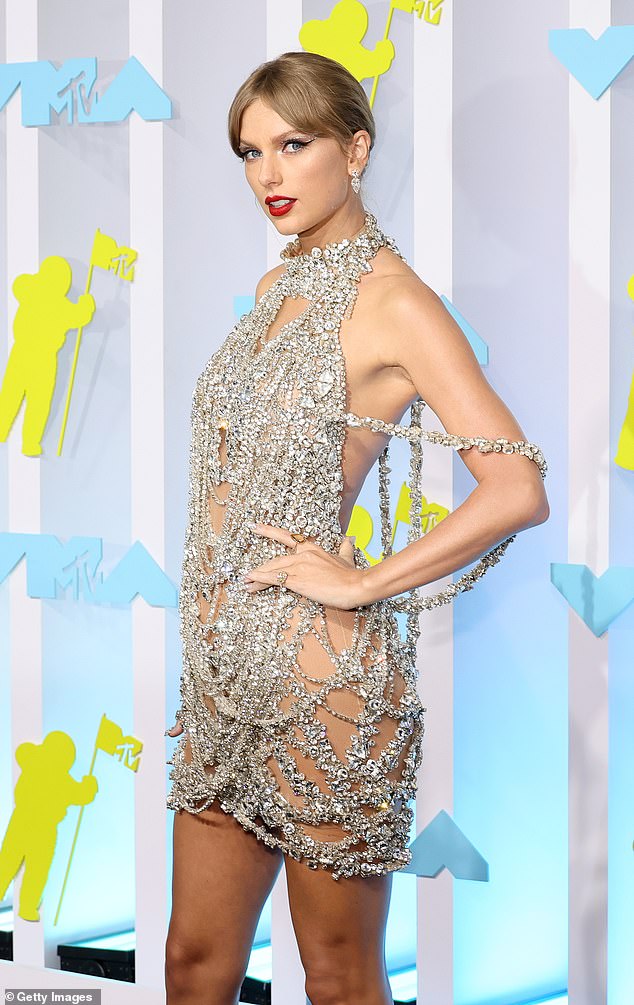 Taylor Swift, 32, was in ‘SHAMBLES’ on Monday when she tweeted about becoming the first artist in music history to claim the entire Top 10 of the Billboard Hot 100 songs chart 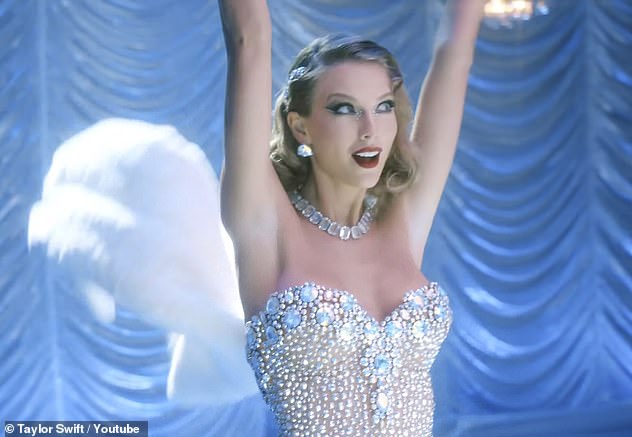 Pop culture queen: The multi-platinum superstar has been taking pop culture by storm with the blockbuster release of her tenth studio album called Midnights ever since it dropped on October 21 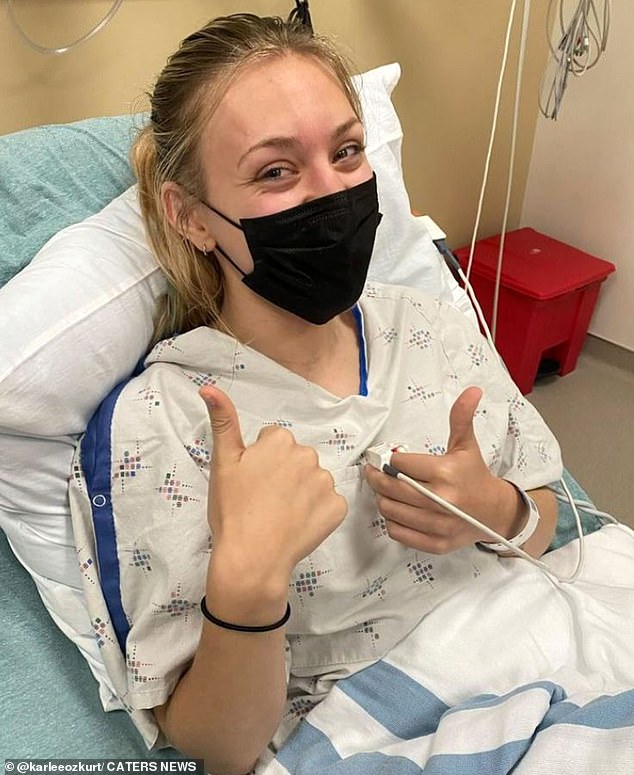 Karlee Kluck, 19, is a Taylor Swift super fan who suffered from a collapsed lung after becoming too excited about the singer’s tour announcement 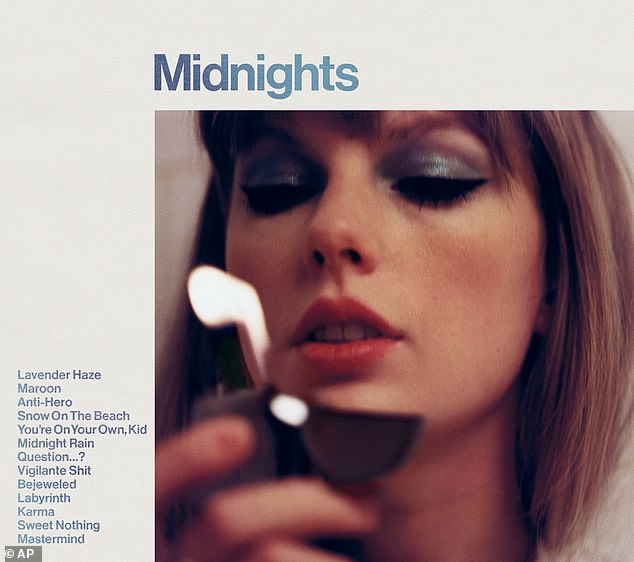 Karlee Kluck, 19, has been a die-hard ‘Swiftie’ for 16 years, so when sister Averee shared the latest tour news, she started to plan for what date she’d get tickets.

The day Karlee was told about the tour, she recalled how she spent the whole evening blasting her favorite Swift songs, singing and dancing along, when she noticed a sharp pain in her chest.

The following morning the pain increased, with Karlee finding it difficult to breathe, so her mom Vanessa took her to hospital where doctors delivered the shocking diagnosis.

Although the fan claims it was her excitement that caused her lung to collapse, according to medical experts, there was likely a pre-existing condition or trauma that caused the condition to occur.

Ticketmaster has faced criticism recently over the skyrocketing price of tickets to concerts, which is the result of its ‘dynamic pricing’ system.

The frequently-criticized program, which has been in place since 2011, allows the prices of ‘platinum tickets’ to fluctuate according to demand.

‘Platinum tickets’ can be located anywhere in the arena, meaning that even less desirable seats could leave fans with a large bill.

Ticketmaster claims the system give fans ‘fair and safe access’ to in-demand tickets with its FAQ page explaining: ‘The prices are adjusted according to supply and demand, similar to how airline tickets and hotel rooms are sold.

‘The goal is to give the most passionate fans fair and safe access to the most in-demand tickets while allowing the artists and everyone involved in staging live events to price tickets closer to their fair value.’

However, ‘dynamic pricing’ seems to have caused nothing but headaches for the fans of music’s most popular acts like Taylor Swift, My Chemical Romance and Drake, with their tour prices surging by hundreds, if not thousands of dollars in recent years.

Biden kicks off his Cambodia summit by thanking his host, the ‘prime minister of...

Prince Charles fears Rwanda row will drown out his Commonwealth message on visit to...

Surprising rules that could land you HUGE fines in Australia