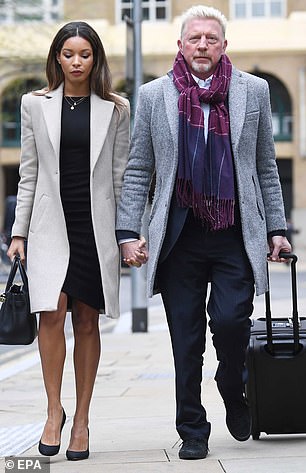 Three-time Wimbledon champion Boris Becker is facing a prison sentence of up to seven years after today being found guilty of breaking UK insolvency laws.

The six-time Grand Slam champ, 54, was accused of hiding millions of pounds worth of assets, including two Wimbledon trophies, to avoid paying his debts.

Today at Southwark Crown Court he was found guilty of four charges under the Insolvency Act and acquitted of a further 20 counts relating to his 2017 bankruptcy.

Former world number one Becker was declared bankrupt in June 2017 over an unpaid loan of more than £3million on his estate in Mallorca, Spain.

He spent hundreds of pounds at luxury department store Harrods, bought online groceries at Ocado and treated himself to designer Ralph Lauren clothes, jurors had heard.

Becker was found guilty of removal of property regarding 426,930 Euros (£350,000) to nine recipients including his ex-wives Barbara and Sharlely ‘Lilly’ Becker.

He was also convicted of trying to conceal the ownership of his £1.8million villa ‘Im Schilling’ in his native Leimen, Germany, as well as his ownership of 75,000 Data Corp shares.

Jurors also found him guilty of concealing a loan of 825,000 Euros (£688,000) owed by him to the Bank Alpinum of Lichtenstein. He could face a maximum seven years in jail.

Becker won his first Wimbledon title in 1985 when he was just 17 years and 228 days old to become the youngest men’s singles champion at SW19. 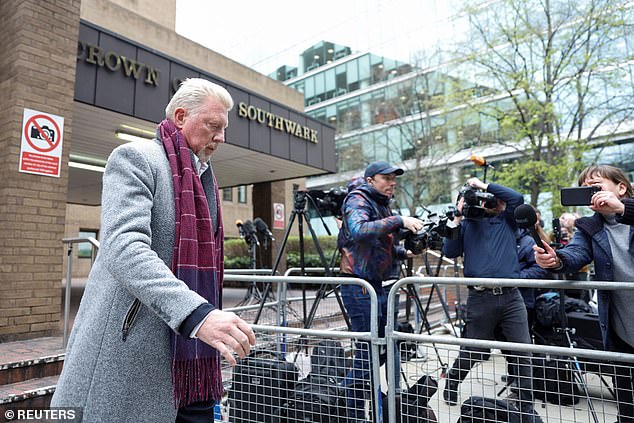 The six-time Grand Slam champ, 54, was accused of hiding millions of pounds worth of assets, including two Wimbledon trophies, to avoid paying his debts 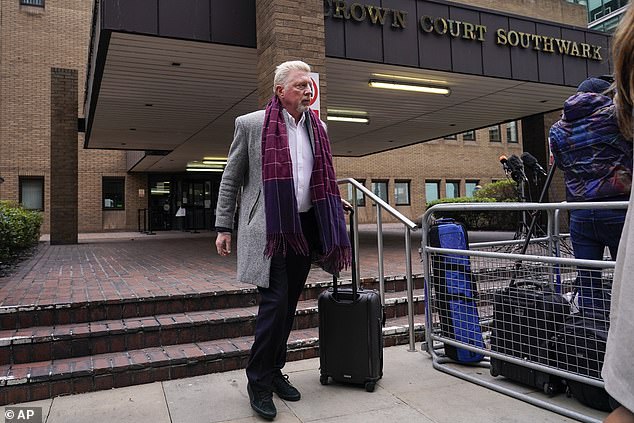 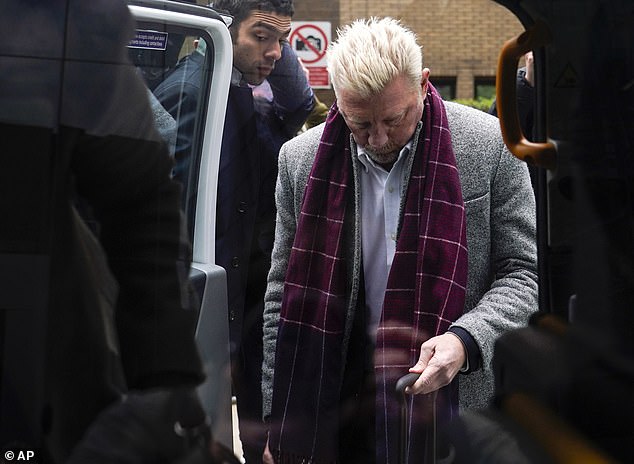 Becker was found guilty of removal of property regarding 426,930 Euros (£350,000) to nine recipients including his ex-wives Barbara and Lilly

Becker, who appeared in 77 finals and won 49 singles titles during his 16 years as a tennis pro, was supported in court by his partner Lilian de Carvalho Monteiro.

He denied 24 offences under the Insolvency Act relating to his June 2017 bankruptcy over a £3.5million loan from private bank Arbuthnot Latham for a villa in Mallorca.

Becker was cleared of 20 other charges under the Insolvency Act, 1986.

In a bid to hide money from his creditors, Becker transferred 426,930 Euros to nine recipients including his ex-wives Barbara and Lilly Becker.

Becker also hid his ownership of a luxury villa in his native Leimen, Germany, where his mother currently resides.

But he was cleared of all other charges including failing to hand over nine tennis trophies including those won at the 1985 and 1989 Wimbledon tournament, the 1991 and 1996 Australian Open and the 1992 Olympics.

Smartly dressed in a dark pinstripe suit and supported by his son Noah and his girlfriend, Becker showed no emotion as he heard the verdicts.

The former world number one, who has been one of the BBC’s leading commentators at Wimbledon for years, was said to have failed to declare two German properties, his interest in a £2.25million flat in Chelsea, occupied by his daughter Anna Ermakova. 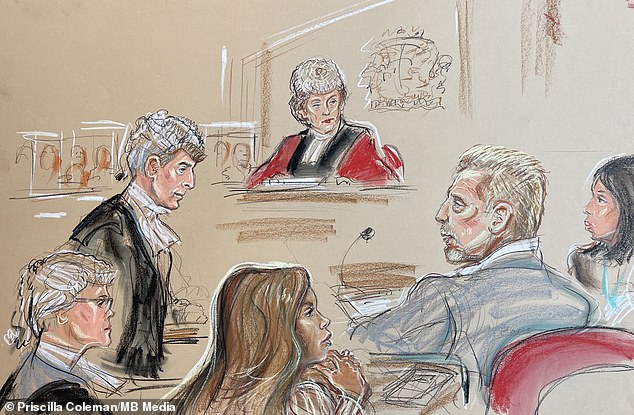 A court artist’s sketch of Boris Becker (far right) in the witness box being questioned by his barrister Jonathan Laidlaw QC (left). His partner Lilian de Carvalho Monteiroover can be seen in the foreground, and prosecutor Rebecca Chalkley on the left 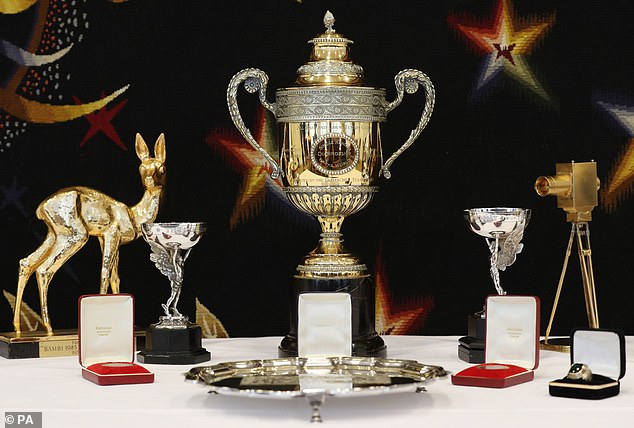 Some of his trophies were auctioned off for £700,000 to pay his debts and he has made various appeals to try to locate them

Giving evidence, occasionally assisted by a German interpreter, Becker insisted he did not know the full extent of his assets and did not set out to conceal anything.

Becker set up two companies in order to reorganise his finances after moving to the UK.

But the day after he was declared bankrupt, Becker stepped down as sole director of his company BBPOL and his then-wife Sharlely ‘Lilly’ Becker was appointed in his place.

After stepping away as the director he continued to use the company bank account in a ‘personal capacity’. 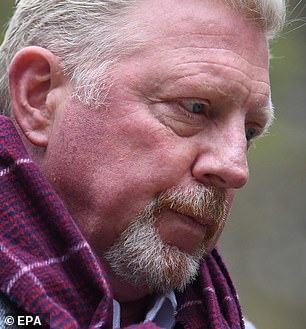 After being declared bankrupt, Becker used that account to transfer money to other accounts belonging to him as well as others including Lilly and his ex-wife Barbara Becker.

‘It is the prosecution case it is no coincidence that the payments increased both in amount and frequency the very day after the order was served,’ said Rebecca Chalkley, prosecuting.

‘The prosecution say that is a further effort to distance himself from this bank account and the sums in it.’

Becker was accused of concealing three properties from his creditors, including a villa and apartment in Leimen, Germany and the luxury flat his daughter used in Chelsea.

He allegedly also transferred £249,000 to his own account, while other funds went into an account he jointly held with his son Noah, while cash was hidden from creditors.

Asked why he failed to do so, Becker claimed he didn’t believe he was the owner of these properties and he had to disclose them. 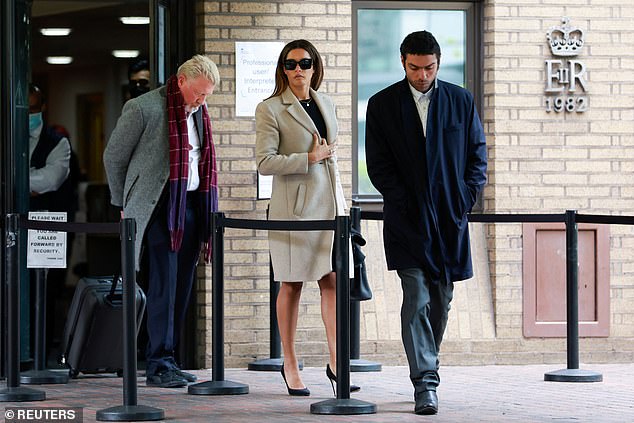 Becker (pictured leaving court) was accused of concealing three properties from his creditors, including a villa and apartment in Leimen, Germany and the luxury flat his daughter used in Chelsea. 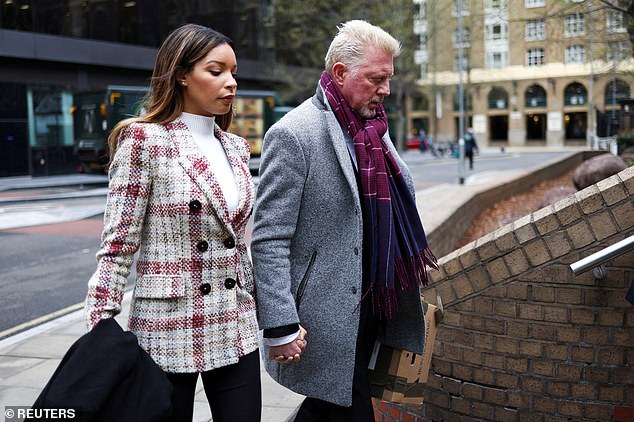 ‘Members of the media wanted me to be with a German-looking blonde wife,’ said Becker.

‘After we got married and got first seen she had threats to her life, that were covered by the police.’

Jurors heard that Becker became ’emotional’ and ‘frustrated’ when he was asked to hand over nine tennis trophies he won over his career to pay for his debts.

Despite the trophies being of relatively ‘low value’, Becker said he did not know their current whereabouts and he couldn’t produce them.

Ms Chalkley told jurors they may well feel sympathy towards Becker as far as the demand he hand over his tennis trophies is concerned.

‘These trophies are assets of value and he ought to have at least given them to the trustees for valuation,’ she said.

‘It is Mr Becker’s case he didn’t know and does not know where these trophies were, some of the most significant of his sporting career.’

Jurors heard that Becker not knowing the location of the trophies that ‘defined his career’ is ‘simply not credible’.

After numerous attempts to recover these trophies, including a BBC campaign, they are yet to be found.

‘Ask yourself if the reason for this is Boris Becker knew they were safely tucked away and therefore there would be no information about where they were,’ said Ms Chalkley.

The former tennis star even offered his wedding ring to bankruptcy trustees in order to pay off his debts.

Becker told the court he was left without any property after selling off two houses in Leimen, Germany, and a luxury flat in Chelsea in order to pay off his debt.

The twice married former tennis champ had been convicted of tax evasion in Germany in 2002, for maintaining properties in Germany while being registered in Monaco.

‘In short the issues boil down to day to day issues of dishonesty and that is what is at the heart of this case,’ said Ms Chalkley.

‘This case concerns Mr Becker’s conduct in connection with the bankruptcy.

‘The alleged offences occurred both before and after he was made subject of a bankruptcy order.’

The prosecutor said Becker a ‘£3million to £3.5million’ loan from private bank Arbuthnot Latham for the property in Mallorca, Spain known as ‘the Finca’.

But the bank started legal proceedings against Becker in July 2016 after he failed to pay them back.

Becker repeatedly tried to get the case thrown out of court before he was made bankrupt on 21 June 2017.

Becker, of Battersea, denied, and was convicted of, removal of property, two counts of failing to disclose estate and one count of concealing debt.

The prosecution was brought by the Insolvency Service on behalf of Business Secretary Kwasi Kwarteng.

He faces sentence at Southwark Crown Court on April 29.

Pip Edwards struggles to contain her modesty while posing in a barely there designer...