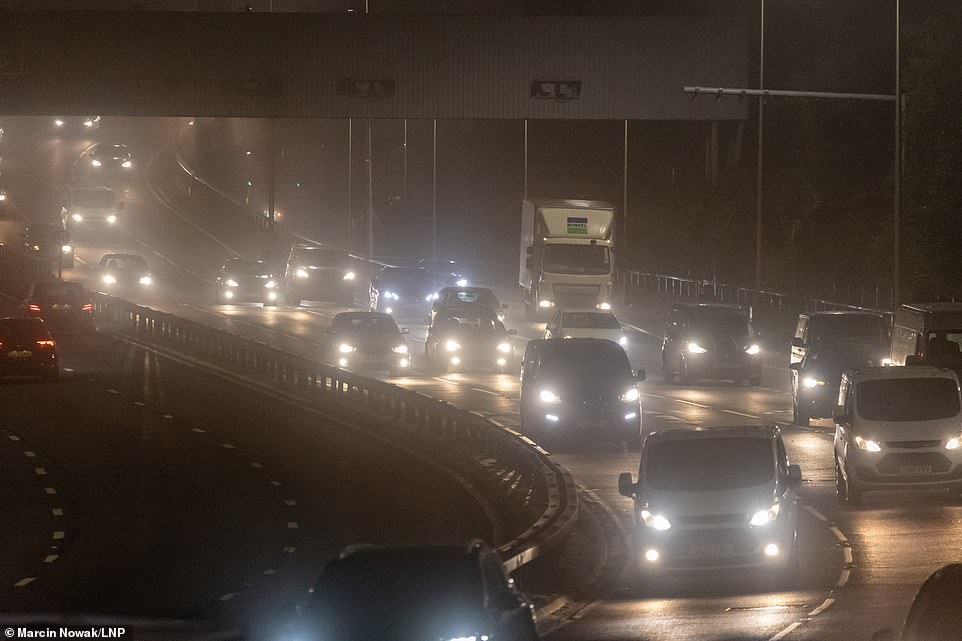 Meteorologists have warned flights could be cancelled, trains delayed and of trouble on the roads this morning after it issued an alert for thick fog in large parts of southern and central England – as the mercury gets set to plunge later this week.

The Met Office issued a yellow warning for fog until at least 10am amid predictions visibility will be reduced to ‘around 100 metres’ in some areas, potentially causing issues for commuters.

It says people should expect ‘slower journey times with delays to bus and train services possible’, while there is also ‘a chance of delays or cancellations to flights’.

London City Airport has urged passengers to check the status of their flight before travelling to the airport this morning ‘due to adverse weather conditions’.

There were similar scenes yesterday as unseasonably warm November weather, which saw some parts of the UK reach temperatures of more than 21C (69.8F), begins to give way to winter.

Later this week the mercury could plunge into single digits, with some forecasts suggesting there might even be a chance of snow in some northern areas over the weekend.

There have been murky conditions on the roads this morning as thick fog smothers large parts of the country. Pictured: Traffic moves through fog on the approach to the Blackwall Tunnel, east London, today 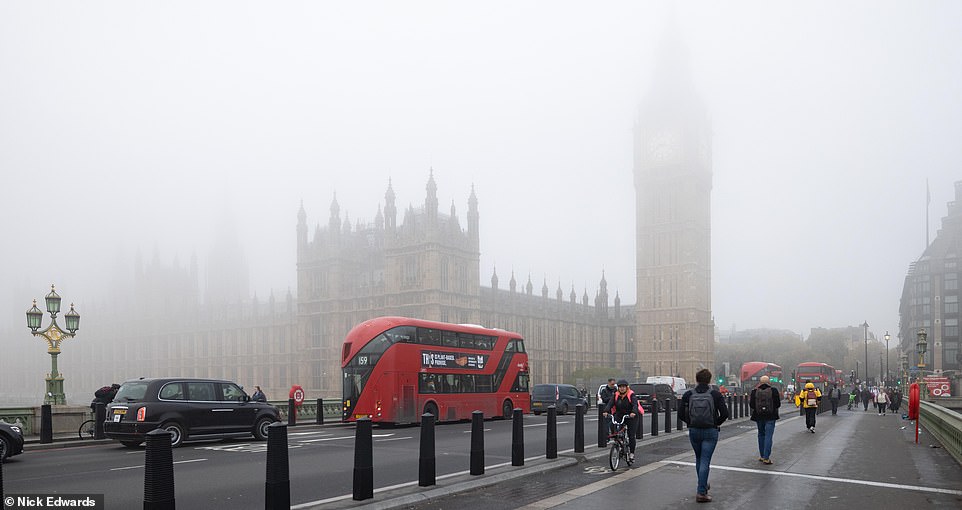 The Houses of Parliament in Westminster covered in fog and low cloud this morning. Forecasters warned people to take care on their commute today as a result of the weather phenomenon 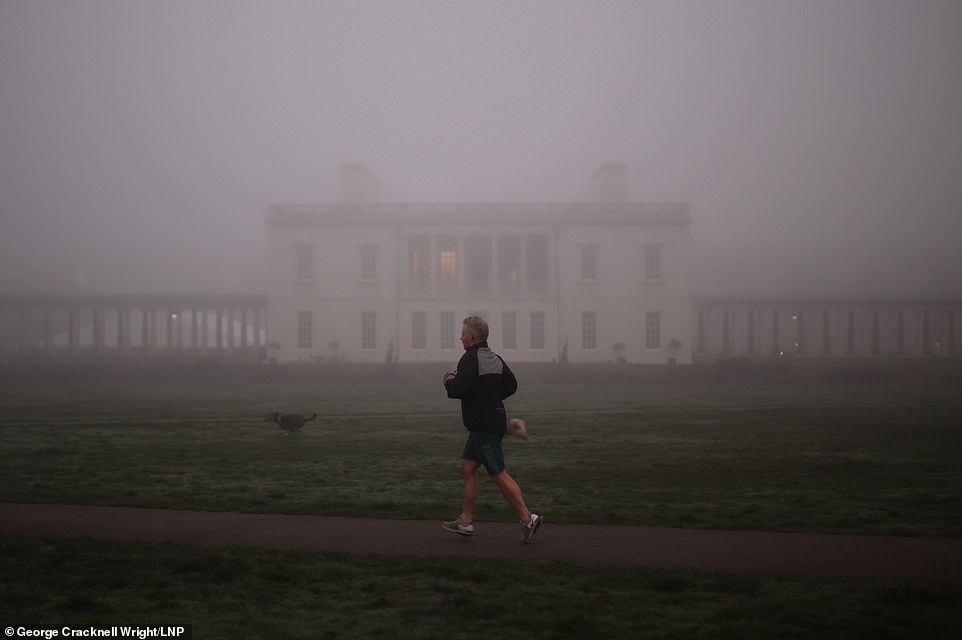 Fog smothers London for the second day in a row as a period of unseasonably warm November weather draws to a close. Pictured: Foggy weather in Greenwich Park doesn’t stop one member of the public going for an early morning jog 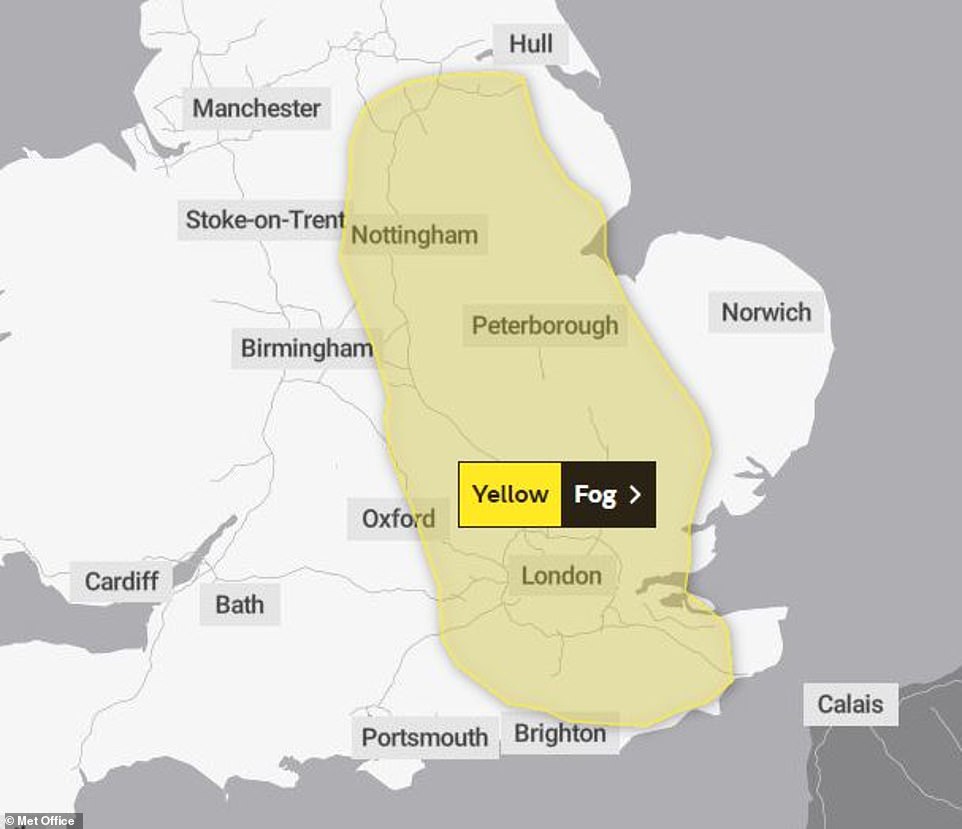 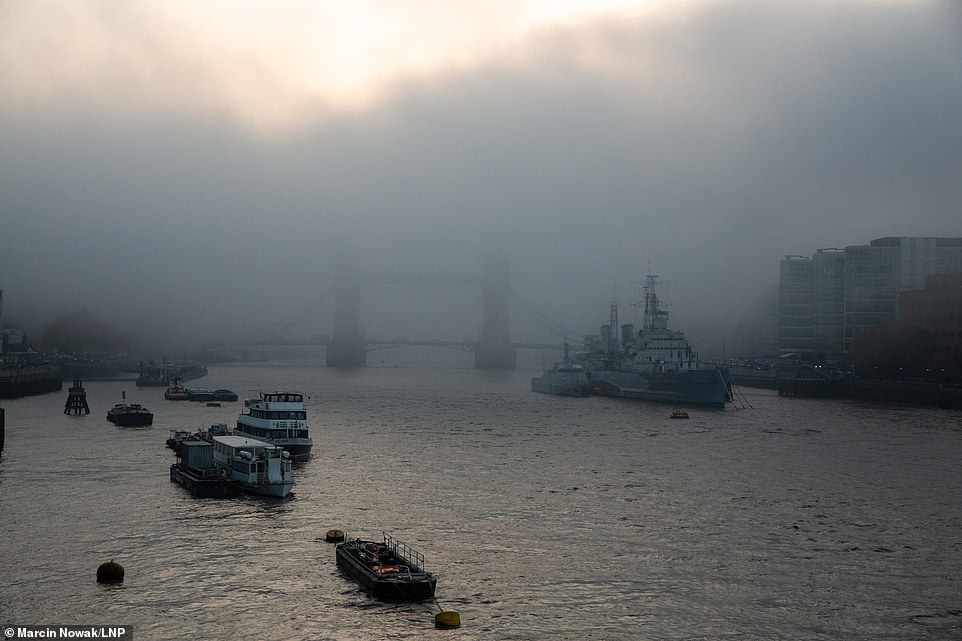 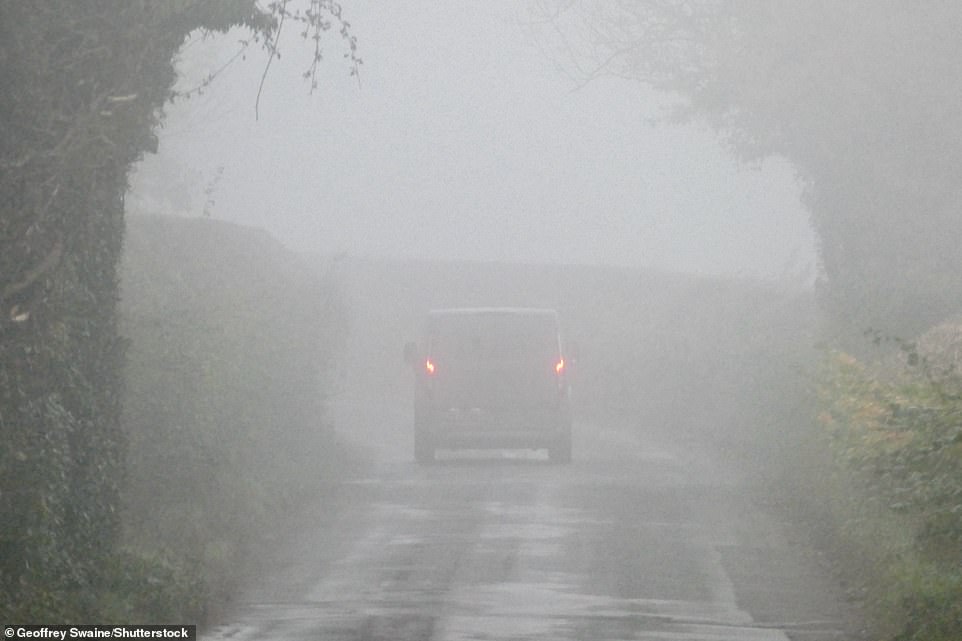 A van is driven through thick fog down a lane in the Oxfordshire countryside this morning. Forecasters are predicting the fog will turn into low cloud later today 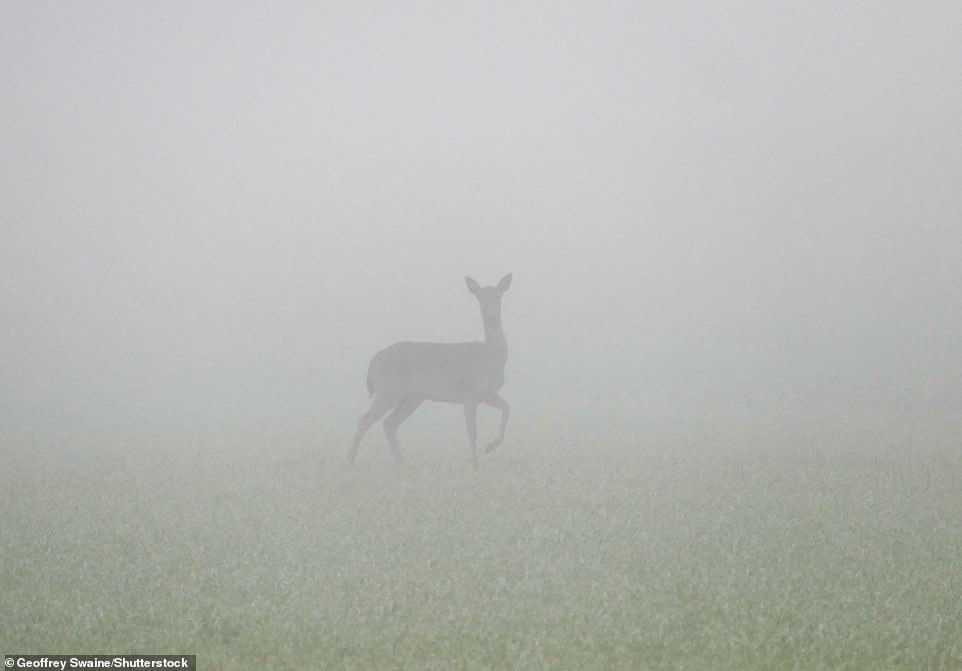 A roaming deer looks on in the morning fog in Oxfordshire today. After a period of warm weather, conditions are set to get chillier in the coming days

On its website, the Met Office said today would see ‘mist and fog, thick in places at first, across central and eastern parts, lifting into low cloud through the day’.

It added this would then give way to a band of cloud and rain across western areas ‘edging east into central parts’, leaving dry and sunny spells in its wake in the west.

Tonight is set to be cloudy with some rain or drizzle moving into eastern areas with low cloud and hill fog clearing later. In the west there could be strong winds with further rain, some of it heavy.

Forecasters are predicting the rain will continue to make its way slowly east tomorrow, becoming persistent in the north, with this being accompanied by gales in the north east. The south and west will see sunshine followed by heavy showers.

While the weather later in the week is less certain, the Met Office says it will continue to be unsettled and ‘often windy with showers or longer spells of rain’ across the country, but many places will also see drier interludes. It warns that there could be severe gales in the far north east, while the country as a whole will feel colder. 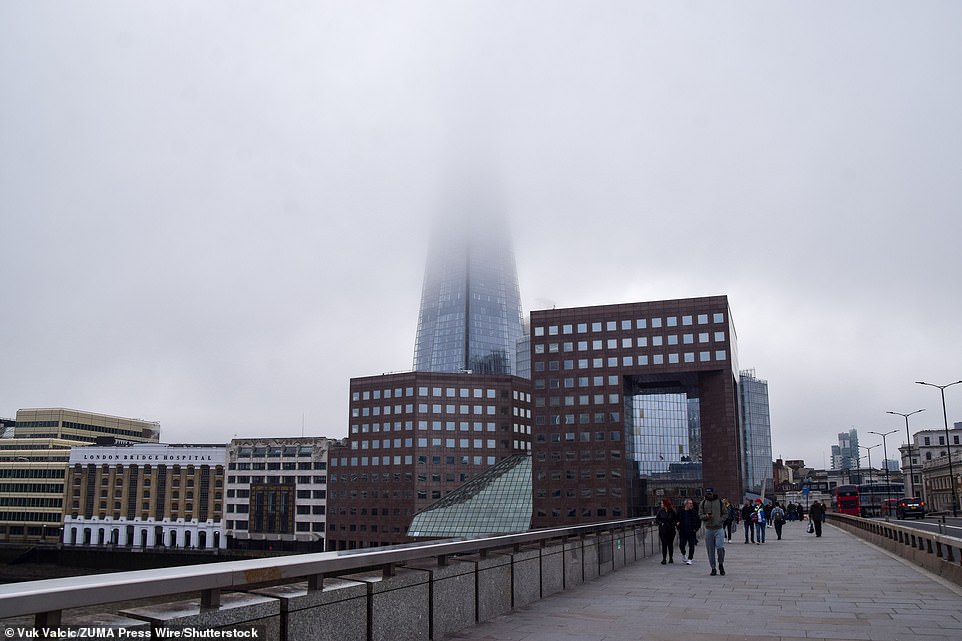 There was also thick fog in London on Remembrance Sunday, with low cloud covering the top of The Shard building

‘These low pressures have the potential to become quite volatile, bringing some very windy weather to the UK throughout next week so it’s important to keep up to date with the forecast over the coming days.’

On Saturday the Met Office predicted snow could begin falling in parts of northern England and Scotland towards the end of next week as temperatures begin to drop, though weather experts downplayed reports of ‘polar blasts’.

It comes after the warmest Armistice Day and Remembrance Sunday on record, according to the Met Office.

The service says the mercury reached summer-like 21.2C (70F) in Porthmadog in north Wales yesterday, which is the highest temperature ever recorded in the UK this late in the year.

On Armistice Day there were record-breaking temperatures of 19.5C (67F) recorded in Myerscough in Lancashire, more than a degree warmer than the previous record of 17.8C (64F) at Kensington Palace in London.

Records were also broken in Scotland, where the mercury hit 19.1C (66F) in Lossiemouth, and Northern Ireland, where temperatures reached 17.4C (63F) in Magilligan.

IAN BIRRELL: Tiny sliver of land that could drag Nato into an all-out war...

Drunk man makes ‘vroom, vroom’ noises into the speaker at a McDonald’s drive-thru in...