Harry Styles and Olivia Wilde were reported to have split on Friday after two years.

The 28-year-old pop star and the 38-year-old actress were said to be ‘taking a break,’ a source told People, claiming the alleged split was due to their ‘different priorities.’

Neither party has yet commented, but the singer-turned-actor and the actress-turned-director appear to have left clues in recent weeks suggesting their relationship was nearing its end.

Telegraphed: Harry Styles, 28, and Olivia Wilde, 38, were reported to have split on Friday, according to People. However, clues to an impending split may have been visible in recent months

Much of the turbulence of Harry and Olivia’s relationship appears to date back to their time filming Don’t Worry Darling, which Harry starred in and Olivia directed while also playing a major supporting role.

Last month, it was reported lead actress Florence and Harry had shared an offscreen kiss after forging a strong bond.

‘Harry and Florence had chemistry from the off, which translated incredibly well on-screen,’ an insider claimed to The Sun. ‘One night they had a bit of a snog, all very light-hearted and a bit of fun, and that was that.’

It’s not clear if Olivia was aware of the kiss at the time, or if she might have only found out about it after the report in late October.

The film: Much of the turbulence of Harry and Olivia’s relationship appears to date back to their time filming Don’t Worry Darling, which Harry starred in and Olivia directed and appeared in

Feelings: Last month, it was reported lead actress Florence and Harry had shared an offscreen kiss after forging a strong bond. It predated his relationship with Olivia, but the news may have come at a bad time for the couple

The source claimed that the brief kiss ‘gossiped about by a couple of members of production,’ but was otherwise unknown.

Crucially, Harry and Florence allegedly kissed after she had broken up with Zach Braff — but before the split had been reported — and Harry had not yet started dating Olivia.

Although the reported kiss may have been one more bit of drama from the production, Harry and Olivia’s relationship was battered by the negative buzz around the film for months.

What should have been a triumphant premiere at the Venice film festival for the lovebirds became a disaster after Florence — who had already opted to skip most promotional events for Don’t Worry Darling — said she would have to miss a press conference about the film that was attended by Harry, Olivia and their costar Chris Pine.

Florence blamed her flight for her inability to attend, but she was then spotted out and about in Venice as the press conference was going on, though she may have arrived too late to get properly prepared. 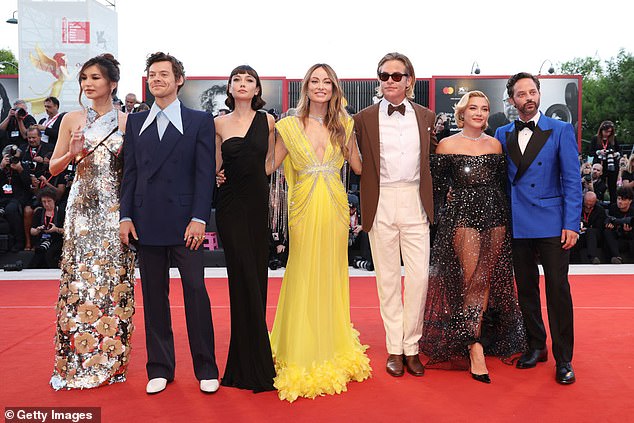 Nothing to see here: After striking up a relationship, they made an effort to keep themselves separated at the Venice Film Festival premiere while not showing any kind of affection publicly; seen September 5 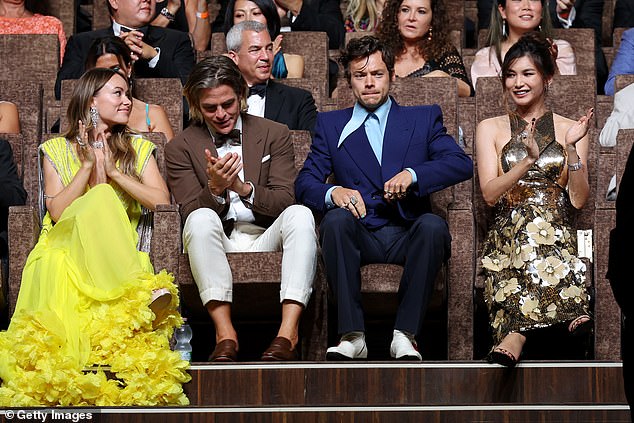 Going overboard: Fans chattered about the drama online for months, culminating in rumors that Harry had spat on his costar Chris Pine at the gala screening, which they denied; seen September 5

Fans speculated that Florence’s chilly relations to Olivia and Harry may have been sparked by her former director starting a relationship with her co-lead in Don’t Worry Darling, though it’s unclear if the alleged off-set kiss she shared with Harry may have contributed.

Throughout the awkward film festival, Harry and Olivia were awkward and obvious in their attempts to keep their distance, despite being lovers at the time.

The tense situation seems to have set social media on fire, and some users latched onto a meaningless interaction between Chris and Harry as they enjoyed cheers at the premiere by spreading rumors that Harry had spat upon the Star Trek actor while taking his seat. However, video from other angles of the two indicated that no such thing had happened, and a representative for Pine denied that any spittle had flown as well. 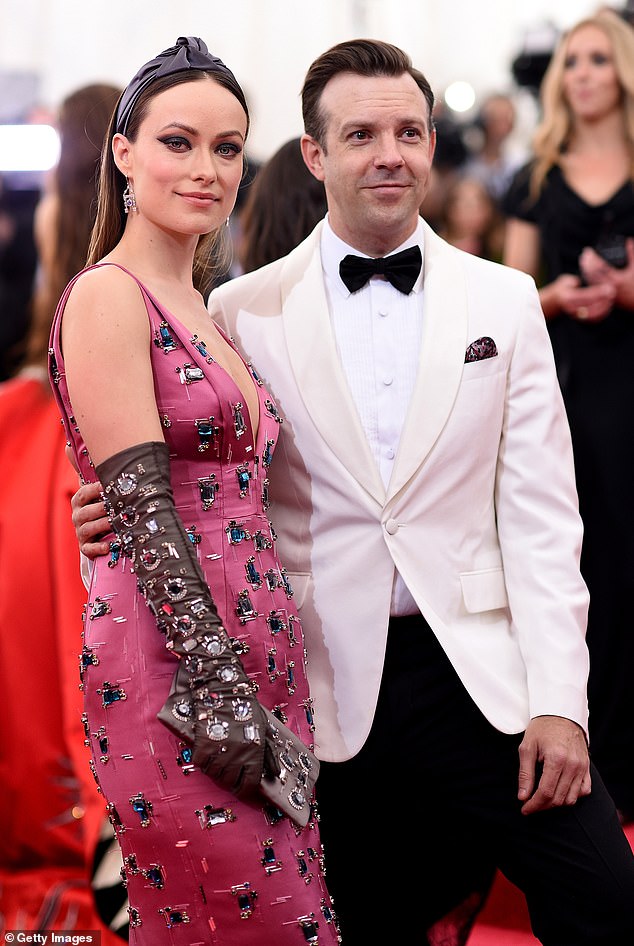 Timing: Olivia’s relationship with ex Jason Sudeikis may have also caused more friction for the new couple. The actress claimed she broke up with Jason before hooking up with Harry, though others cast doubt on her timeline 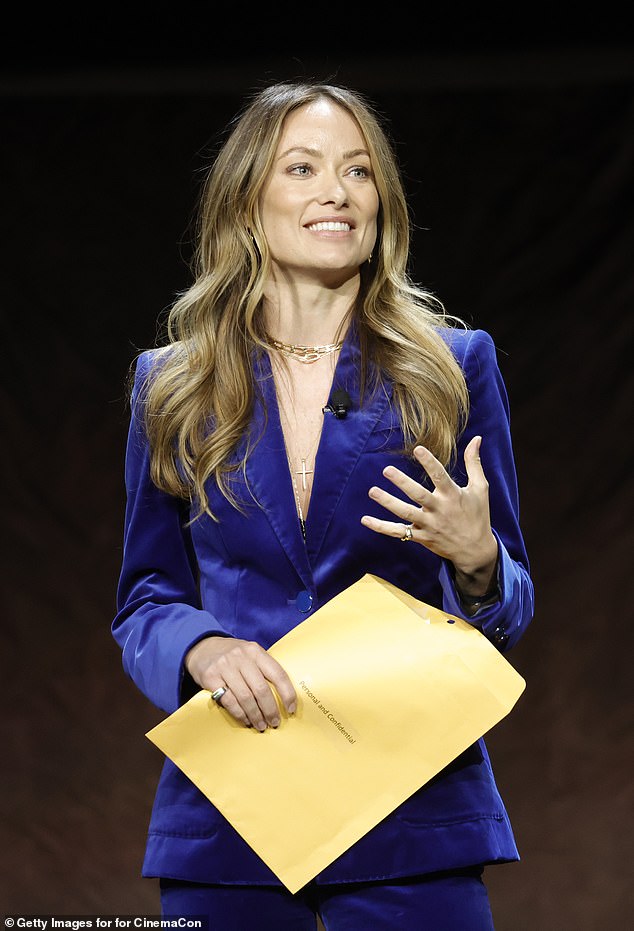 In public: Olivia’s conflict with Jason spilled out in public when she was served custody papers onstage at the exhibitor conference CinemaCon in April, which she blasted; seen April 26

Among the pans for Don’t Worry Darling, several top critics highlighted what they found to be deficiencies in Harry’s acting.

It is the director’s job to coach actors and to get the best possible performance out of them, though it’s unclear if the bad reviews affected the two.

Olivia’s relationship with her ex Jason also appears to have been a major stressor for the couple.

Ahead of reports of the former couple’s dramatic final days, Olivia’s on-stage presentation in April at the exhibitor conference CinemaCon was interrupted when she was served what later turned out to be custody papers on stage.

The significant age gap between the stars may have also contributed to their split, as it was a constant topic of discussion for fans.

In addition to be 10 years older than Harry, Olivia also shares two children with her ex Jason, which may have presented extra challenges for her new partner as they navigated her life without the children’s father. 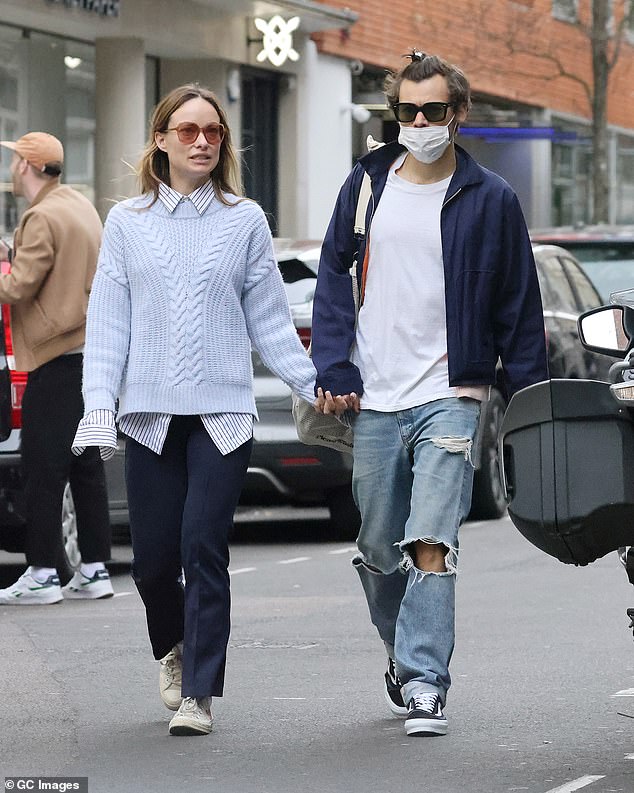 Inescapable: The significant age gap of 10 years between the stars may have also contributed to their split, as it was a constant topic of discussion for fans; seen in March in London

Fans who noticed Olivia dancing with her son Otis, eight, and daughter Daisy, six, at Harry’s concert in Los Angeles on Tuesday might have been surprised to hear of the abrupt split.

The actress didn’t seem to have a care in mind and was happy to be near the star of the evening.

But Harry’s show even attracted his ex-girlfriend Kendall Jenner, who was seen enjoying his songs with her sister Kylie Jenner and their mutual friend Hailey Bieber.

A few days before the concert Olivia was seen living a gym just five minutes after Harry arrived, but the actress has made several recent red carpet appearances without Harry by her side. 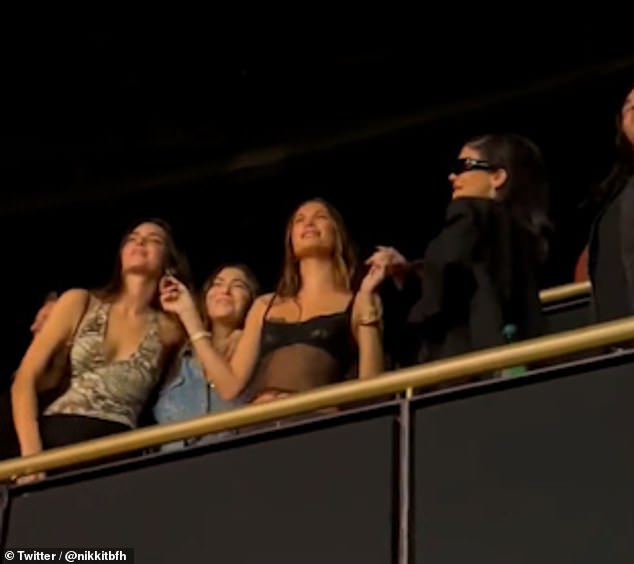 Old times: Although Olivia was seen earlier this week dancing with her children at Harry’s LA concert, but his ex-girlfriend Kendall Jenner also caught the show with her sister Kylie and friend Hailey Bieber

Going solo: Although Olivia and Harry have been seen together at the gym in recent days, she has continued to make several red carpet appearances without him