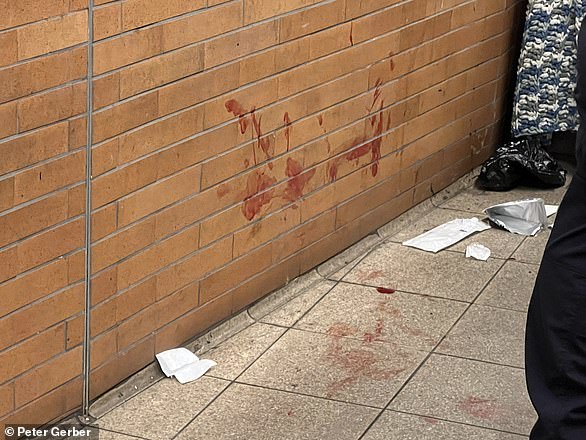 At least six people were stabbed over the weekend in the New York City’s crime-ridden subway system, which has seen close to 300 violent incidents so far this year, despite city and state leaders’ efforts to curb the bloodshed.

A 31-year-old victim was on a southbound 6 train approaching Canal Street at 6.10 p.m. on Sunday when police say a stranger plunged a knife twice into his arm without any apparent provocation.

The attacker remained on the train as it continued on its way to Brooklyn, while the victim got off at the Canal Street station, where photographs showed his blood staining walls and floors.

The knifed man, who has not been named, was transported to Bellevue Hospital was listed in stable condition.

Bloody Sunday: A stabbing victim’s blood stains the wall and floor at the Canal Street station in Manhattan on Sunday night 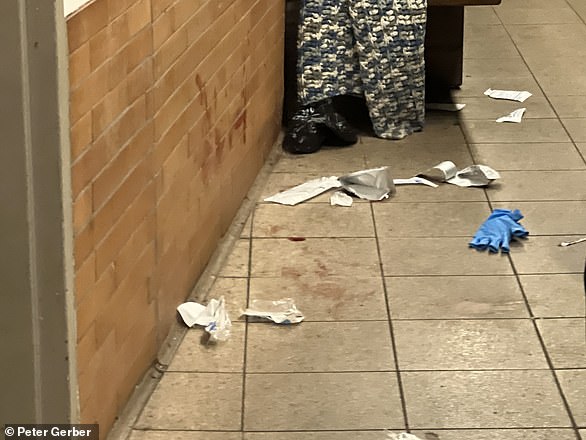 Police say the 31-year-old victim was riding a southbound 6 train when he was attacked without any provocation by a knife-wielding stranger, who stabbed him twice in the arm 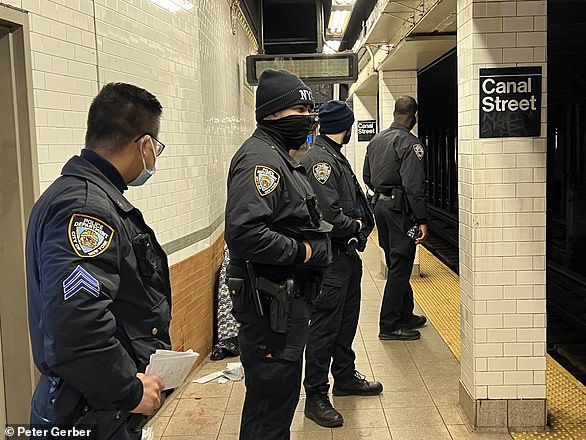 Police officers are seen investigating at the scene of Sunday’s stabbing, which capped off a violent weekend in the city’s sprawling subway system 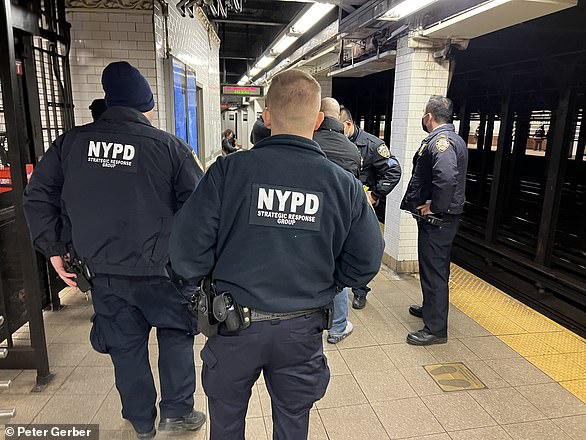 Police say the suspect, who fled, was last seen wearing a colorful vest over a grey hoodie. He has not been arrested as of Monday 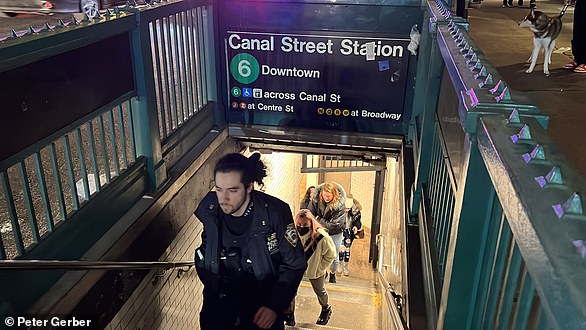 A police officer emerges from the No 6 Canal Street Station on Sunday, following the random stabbing that sent the victim to the hospital in stable condition

The suspect, believed to be a man in his 30s, was described as wearing a colorful vest over a gray hoodie. He has not been arrested as of Monday morning.

Sunday’s incident capped off a violent weekend, which saw at least five other people assaulted in the subway system in a span of 48 hours.

On Friday evening – just hours after Adams and Hochul unveiled a new subway safety plan – a man was slashed in the forearm at the Briarwood subway station in Queens and was hospitalized in stable condition, reported NBC New York.

At around 3 a.m. on Saturday, a 46-year-old homeless man was stabbed multiple times in the thigh and buttocks during a robbery attempt at Jamaica station in queens

About 12 hours later, a man punched a 20-year-old woman on the 3 train platform at Livonia and Van Siclen Avenue in Brooklyn. An argument ensued, during which police say the male attacker pulled out a knife and stabbed the woman three times in the abdomen. The victim was hospitalized in stable condition.

At around 8.30 p.m. on Saturday, a 24-year-old man was standing on the A-C-E platform in the 168th Street station in Manhattan when police say he was stabbed by two teens during a botched robbery attempt.

About 30 minutes later, another man was riding a southbound train in Morningside Heights in Manhattan when he was knifed after asking a stranger to stop smoking.

According to the latest data from the New York City Police Department, since the beginning of the year, there have been 276 instances of crime in the subway system,  which represent a 65 percent increase compared to the same period in 2021.

New York City subway stabbings and slashings have spiked 29 percent in the last last year, with 182 incidents compared to 141 a year before in 2020.

And 2022 is squaring up to be even worse. So far this year, there have been 27 subway attacks on passengers – a 35 per cent increase on the 20 reported for the same period of 2021.

Then on Monday, Kyle Westby, 42, was attacked on his way home just after midnight.

Westby was coming back from a late dinner out with his girlfriend when he arrived at the Prospect Heights station and saw two men, one of whom asked ‘Why are you staring at me,’ the New York Post reports.

‘I saw him reach into his jacket and pull out  a brown object,’ Westby told the Post. ‘He swung at me, and I ran away, so I ran up the stairs and thank God the cops were there.

‘I said ‘Officers, this man swung at me with an ax.’ Immediately, they went down and apprehended him.’

Police report they took Robert Griffith, 58, into custody following the attack, and charged him with attempted assault, menacing and criminal possession of a weapon, saying Griffith also allegedly had a punch dagger and screwdriver.

Hours later, Evelina Rivera, a 30-year-old chef, was struck by a homeless man wielding a metal pole on her way home from her shift.

She was on her way home on a No. 4 train heading to the Bronx at 2.39am when a homeless man, who had earlier poured honey over himself, asked her and another female passenger: ‘Oh would you guys just shut the f*** up?’

At that point, she said, the man tried to strike the other woman, ‘misses her by a millimeter’ and instead broke the subway window, as the would-be victim used pepper spray to blind him.

Unable to see, Rivera said, the man started swinging wildly and ‘hit me so hard the ball came out of my [septum] piercing. It’s crooked.’

Rivera said she was ‘about to have a panic attack’ following the attack, and she and the other woman got off at the next stop to report the incident to police.

Elon Musk ‘tells Twitter staff at all-hands meeting that bankruptcy is not out of...

Inside the plush rented home for Meghan’s shoot