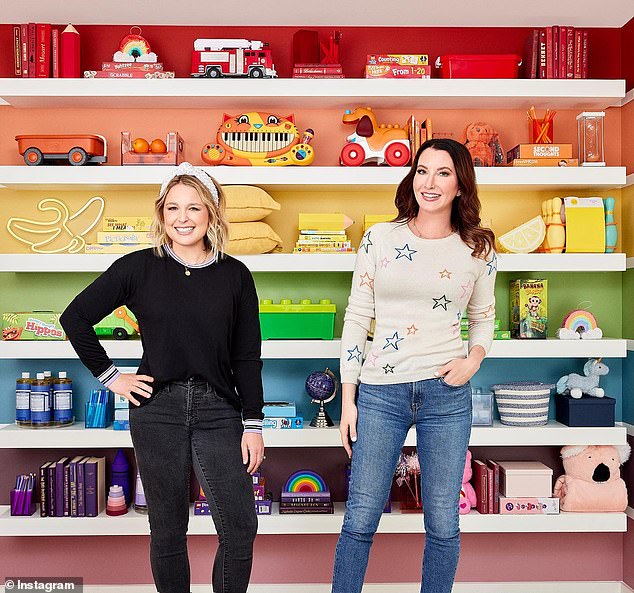 The Home Edit’s Joanna Teplin says her friend and partner Clea Shearer is a ‘pillar of strength’ and is doing well since her double mastectomy.

Shearer, 40, revealed last week that she has been diagnosed with stage 2 mammary carcinoma after discovering a lump in her breast earlier this year.

On Friday, she underwent a double mastectomy and is currently at home recovering — but her ‘Get Organized With the Home Edit’ co-star Teplin, 41, offered an update on the Today show this morning.

‘She’s doing well. She is just so strong and such a pillar of strength, that I can’t imagine anyone tackling cancer the way that she has and is,’ she said.

‘She’s right now recovering from the surgery. The surgery was very successful. And she’s home now just waiting to find out any next steps.’ 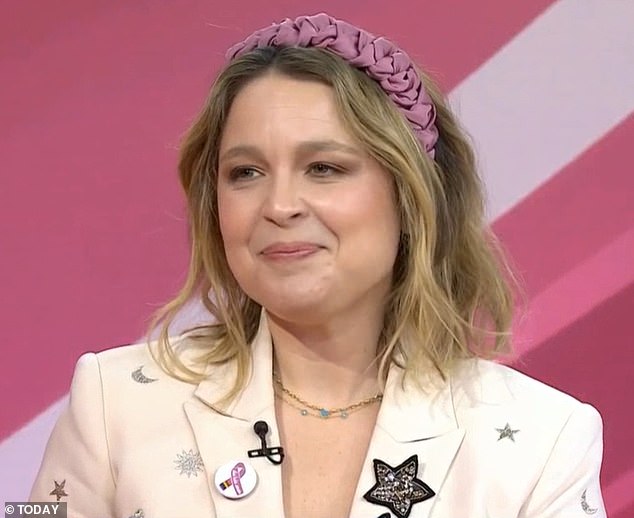 ‘She’s doing well. She is just so strong and such a pillar of strength, that I can’t imagine anyone tackling cancer the way that she has and is,’ Teplin said

Shearer revealed her diagnosis with a candid Instagram post on April 7, explaining that she’d found a lump during a self-exam and, after a mammogram, ultrasound, and triple biopsy, was told she had two aggressive tumors.

She underwent a double mastectomy on Friday and updated Instagram followers this weekend.

‘I’ve been mobile, I’ve been walking around. I have some pain, don’t get me wrong, but, you know, we can do hard things,’ she said.

‘If anyone can handle cancer, it’s me,’ she added.

Teplin told Savannah Guthrie this morning that it’s been hard getting Shearer to just relax since the procedure.

‘I told her I’m gonna sit on her like a chicken! She’s having a tough time sitting,’ she said. 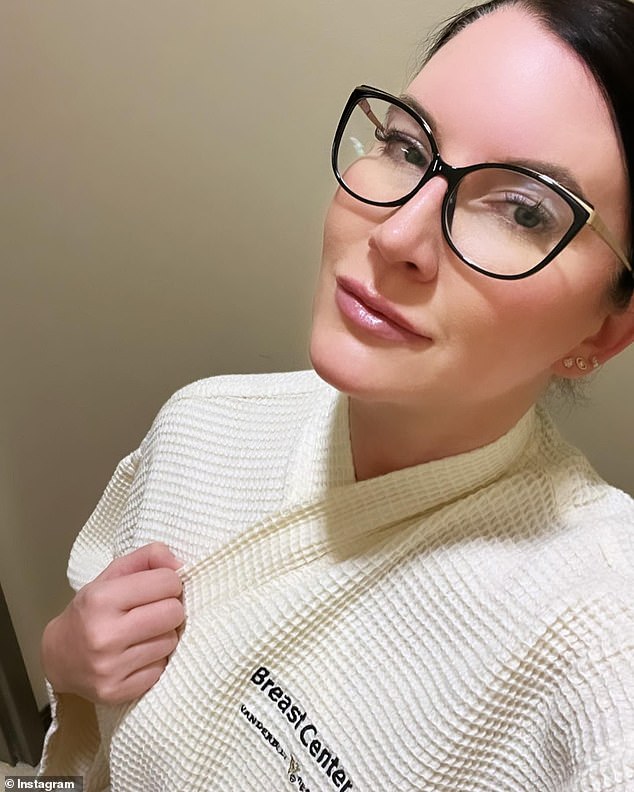 Shearer, 40, revealed last week that she has been diagnosed with stage 2 mammary carcinoma after discovering a lump in her breast earlier this year 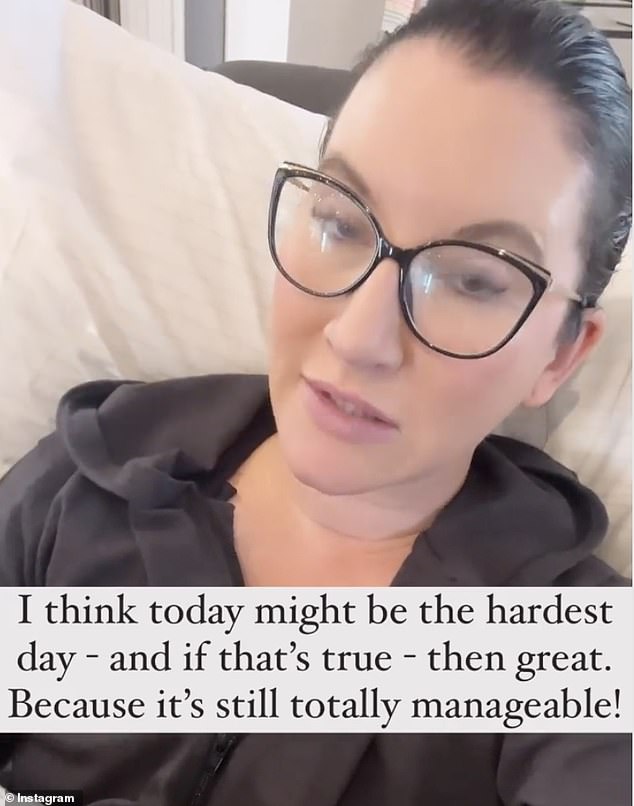 On Friday, she underwent a double mastectomy and is currently at home recovering 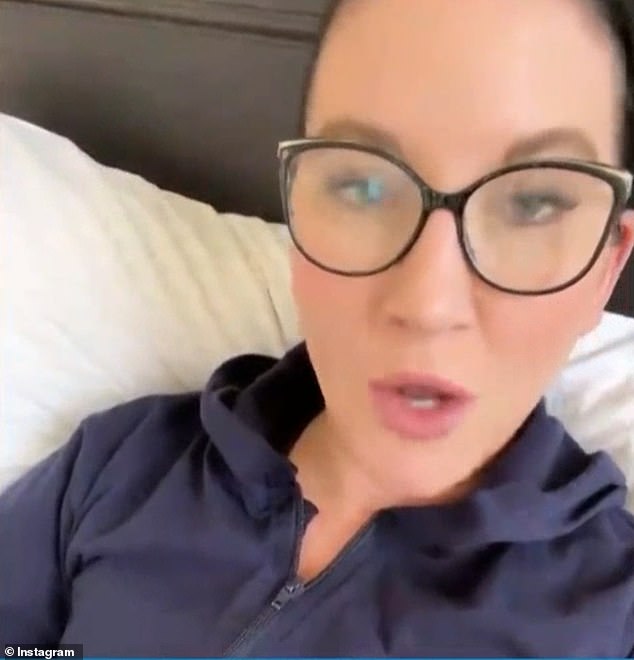 ‘She has the best attitude. I can’t imagine having the attitude that she has, but she’s just like, “If it’s gonna happen to someone, why not me?” instead of, “Why me?” Teplin said

She also noted that her friend is keeping an upbeat outlook throughout the whole ordeal.

‘She has the best attitude. I can’t imagine having the attitude that she has, but she’s just like, “If it’s gonna happen to someone, why not me?” instead of, “Why me?” she said.

‘Because she’s able to have that fortitude and that way of thinking about it, she’s able to help so many other people,’ she added, by being an advocate.

‘If there was something to show for this horrible thing she has to go through, then it was all worth being public for,’ she said.

Shearer had suspected something might be wrong during a self-exam when she noticed a lump.

‘She said, “I think I found something, I’m not sure what it is,” and we just decided, we’re not gonna spiral yet, let’s get more information first. And so she decided to try to get an appointment with her OB,’ Teplin said.

‘They couldn’t get her in for a really long time, and so she realized she had to keep pushing,’ she continued. 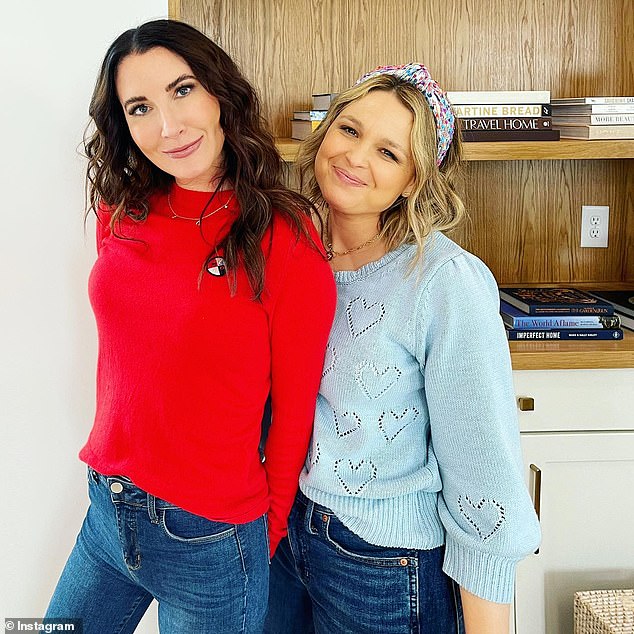 Shearer had suspected something might be wrong during a self-exam when she noticed a lump, and soon underwent a mammogram and biopsy 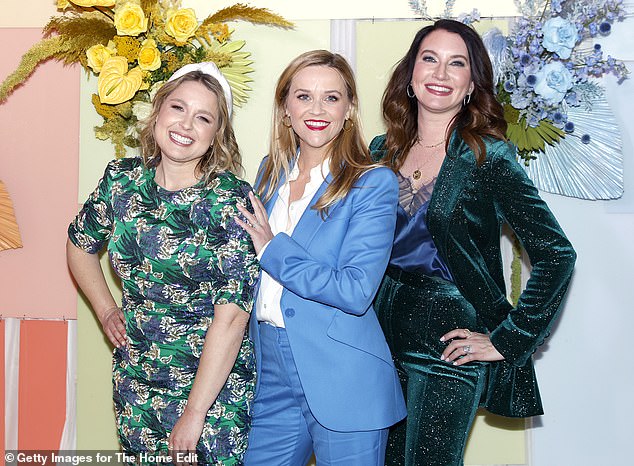 Shearer reached out to her general practitioner, who made her a mammogram appointment.

Shearer had shared her health news last week shortly before her operation.

‘I have breast cancer. It’s a hard thing to say, but it’s easier than keeping it to myself,’ she captioned a photo of herself wearing a white robe at the Vanderbilt Breast Center in Nashville, Tennessee.

‘I’m having a double mastectomy tomorrow (prayers are welcome!), and I wanted to say a few words before I do,’ she continued.

‘I found a lump myself the last week of February. I had been trying to make an appt with my OB for several months, and even when I told them I found a lump, they couldn’t accommodate me.

‘I had to request a mammogram from my general doctor, which led to an ultrasound, and then an emergency triple biopsy. I have two tumors, 1 cm each, that are aggressive and fast moving – but I caught it early. Had I not taken this upon myself, I would be in a completely different situation right now. 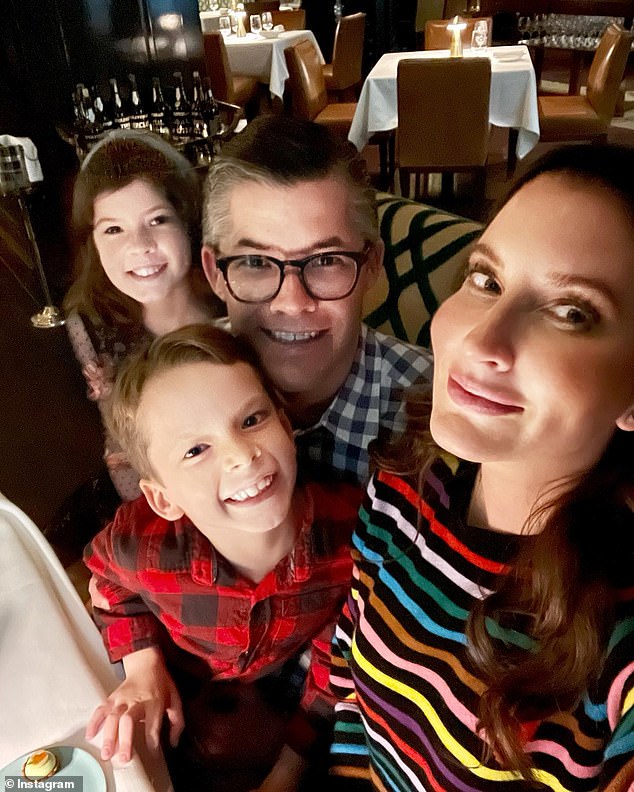 Shearer shares a daughter, Stella, 11, and a son Sutton, 8, with her husband, photographer John Shearer 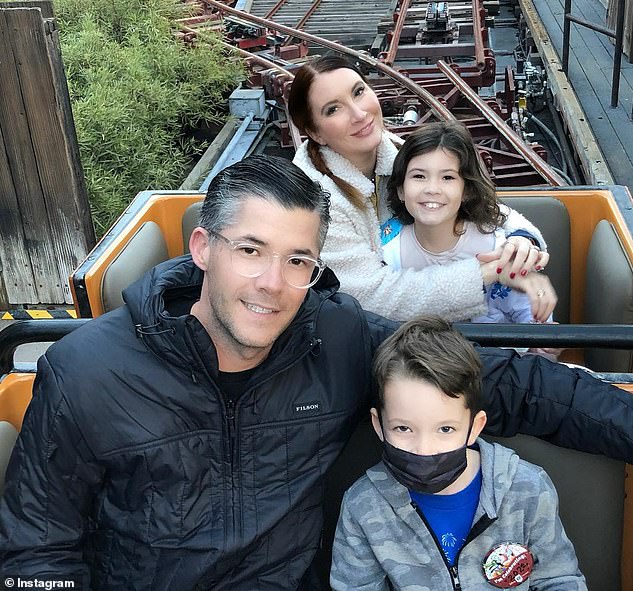 ‘It’s a personal choice to make this public, but sharing my experience makes cancer feel purposeful,’ she said.

‘If I can convince any of you to self-examine on a regular basis, self-advocate always, and to prioritize your health over your busy schedules — then this will have meant something. It’s also important to note that I was under 40 when these tumors formed, and have no history of breast cancer in my family. Even if cancer feels improbable, it’s still very possible.

‘I have to admit, for the first few days I endured the “why me” feelings. But quickly, I started to think “honestly, why NOT me?!” I have all the support, resources, and a platform to help other people through this. So if anyone has to have breast cancer, I’ll gladly let it be me,’ she said.

Public well-wishes have poured in from Lauren Conrad, Rachel Zoe, and Ali Fedotowsky.

Shearer shot to fame after she Teplin founded their home organizing company, The Home Edit, in 2015 and earned a celebrity following. 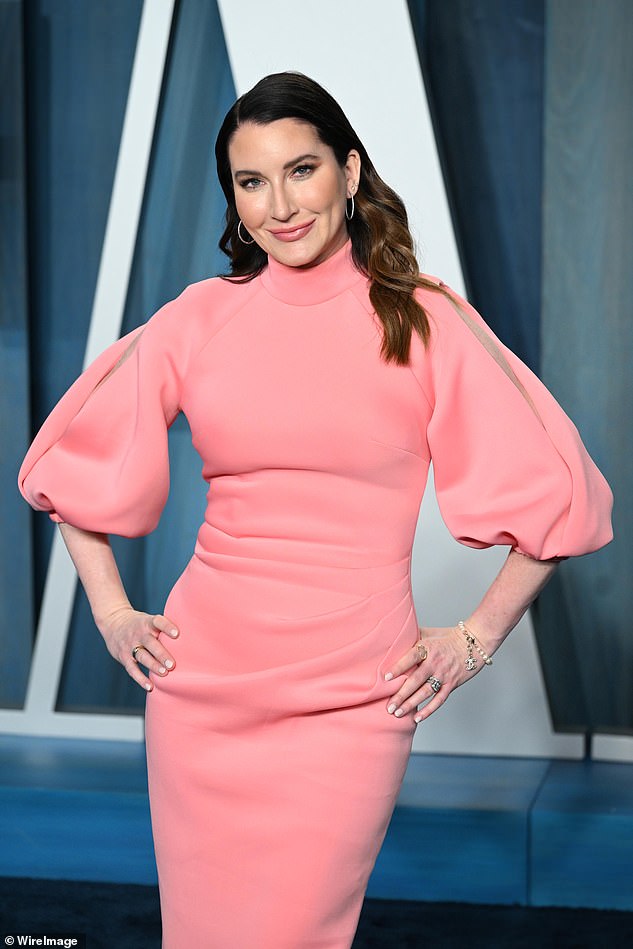 Their business expanded into a book, The Home Edit: A Guide to Organizing and Realizing Your House Goals; an Instagram following of nearly six million, a Netflix series that is in its second season; and most recently a special magazine issue, The Home Edit: Feel-Good Organizing.

Shearer, who shares a daughter, Stella, 11, and a son Sutton, 8, with her husband, photographer John Shearer, told People that she was in New York City filming segment for the Today show with Teplin when she discovered two lumps.

‘I felt something, a mass, a lump. But I didn’t know what a lump actually even felt like, so I was just in my hotel room Googling, “What does a breast tumor feel like?”‘ she explained.

Her test results came back as ‘suspicious and concerning,’ which led to her having an emergency triple biopsy on the same day.

Shearer learned she had breast cancer on March 11, and she said the first person she reached out to was her friend and client Christina Applegate, who is a breast cancer survivor.

‘She’s just incredible and she has had a very similar situation, so she’s been a tremendous support and just someone who’s really counseled me going through this,’ she said of the ‘Dead to Me’ star, who was one of their first A-list clients. 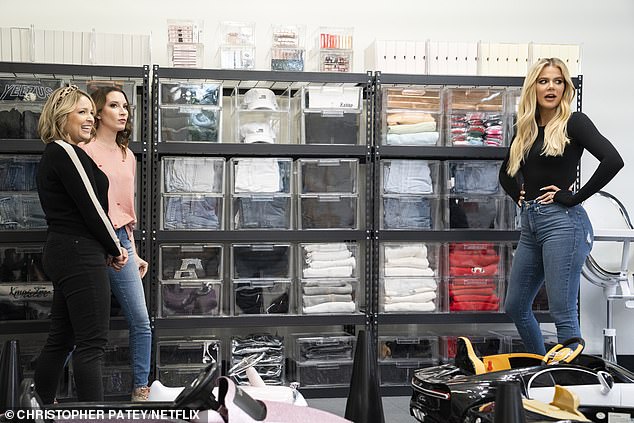 Shearer shot to fame after she Teplin founded their home organizing company, The Home Edit, in 2015 and earned a celebrity following

Shearer also has the support of Teplin, who told her they are ‘going to get through this together.’

The mother of two shared that the hardest part for her is having to tell her children the news, which she hadn’t done as of Tuesday.

‘I didn’t want to tell them with too much advanced notice before my operation just because I think that it would be really hard for them to be carrying around that anxiety for the whole week,’ she explained.

‘That’s actually the part that I’m most nervous about. I know I’m going to be okay and I know that I’ll be fine in surgery and recovery and all of it, but I’m nervous to tell my kids.’

Shearer will next find out if she also needs chemotherapy or other further treatment.

‘I’m a fighter. If anyone can crush cancer, it is me,’ she said. ‘I’m literally afraid for cancer and I’ve got this.’

On Instagram, she also encouraged others to put their health first.

‘Please prioritize your health. I know how hard it is on a daily basis, to be a mom, to be working, to have a hundred things always on your to do list, but, I mean, what does it all matter if we’re not healthy?’ she said