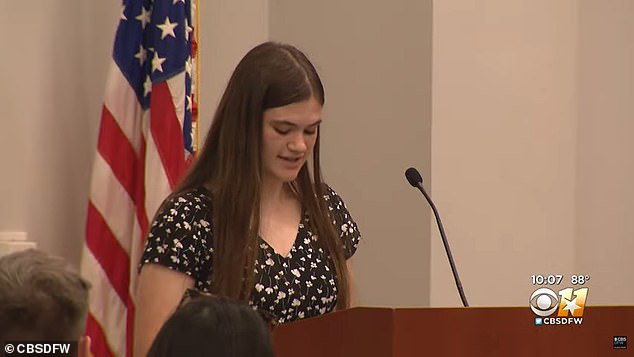 Texas parents have angrily denounced their school district’s highly restrictive new dress code, speaking out at a Monday night board meeting against the rules that ban t-shirts, hoodies, dresses, skirts and denim.

Forney Independent School District, which encompasses 18 elementary, middle and high schools just east of Dallas, announced last week that they will be implementing the strict rules for their 14,000 students in the new term, which begins on August 11.

But on Monday night parents and some students condemned the rules.

Brooklynn Hollaman, a 10th grade student, is seen on Monday night wearing a dress that would be banned under the new rules. Only students from pre-K up to 4th grade can wear dresses 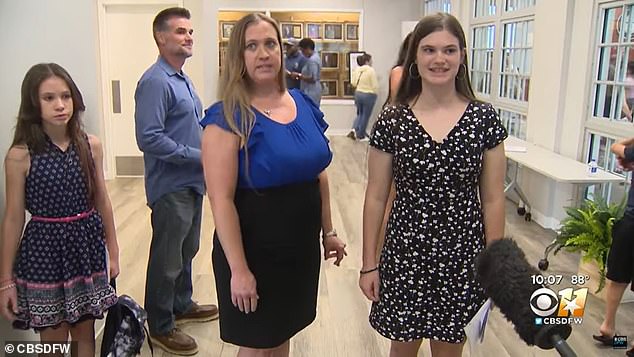 Hollaman (right) is seen outside Monday’s school board meeting, in which she contested the new school dress code 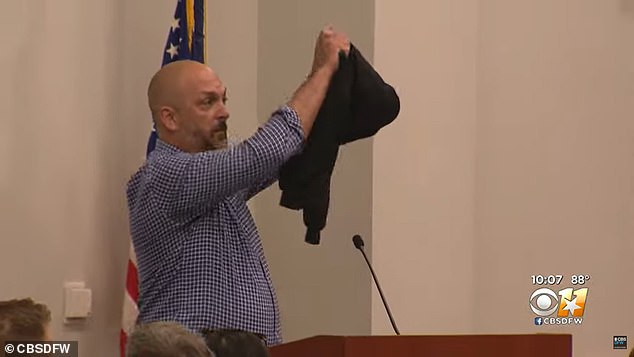 James Traylor, the interim mayor of Forney, holds up a hoodie, emphasizing that it would be banned under the new dress code

What is banned under Forney School District’s dress code?

Hats, caps, bandanas, or other non-religious head coverings worn inside the school building.

Leather, suede, vinyl, corduroy, and denim materials (not including outerwear).

Shorts more than 3 inches above the knee, and only in solid khaki, navy or black.

Clinging or transparent clothing is unacceptable.

Clothing may be NO more than one size larger than the student’s measurements.

Any clothing that is not specifically addressed as acceptable is unacceptable, for example; midriff sweaters, wristbands, boas, fur fringe.

Hair cuts and make up must not be ‘extreme’.

Brooklynn Hollaman, a 10th grade student, addressed the meeting wearing a smart dress – which she and other students above the fourth grade would not be allowed to wear when the new rules come into force.

She has begun a petition, which now has more than 5,000 signatories.

‘I don’t agree with it,’ Hollaman said.

‘Hopefully, they’ll change their mind, a lot of people are on my side right now.

‘I think the dress code is unfair, and I’m wearing this dress tonight to contradict what the district is stating.’

The interim mayor of Forney, James Traylor, who has a daughter within the district, called the rules ‘asinine’.

He told the meeting: ‘I don’t think any man should be telling a woman what they should wear.

‘I work with women daily, and they wear dresses, skirts, and they’re professional.’

The district can make an exception for specific clothing if a parent petitions for it.

But one parent asked: ‘Do I really need to request permission for my girl to be a girl?’

Another father, Christian Reed, told WFAA that he felt it was limiting self-expression and creativity.

‘I think it’s putting a huge limit on kids and children in this district to express themselves,’ Reed said.

‘You know, we have to buy a set of clothes for school and then a set for everyday life. Most school districts aren’t doing this.’

The school district published a slick video on its website promoting the new code.

A student declares: ‘Every profession has a dress code, whether it’s scrubs, a welding helmet, or a chef’s apron.

‘The way I dress plays an important role in professionalism and safety, both in the classroom and on the job site.’

The video lists ‘Professionalism and Strong Work Ethic’ as one of the top employee abilities that employers look for.

Justin Terry, the superintendent of the school district, then explains the change.

‘Things like creativity and collaboration are so important, but what’s also important are some of the foundational baseline employability skills,’ he says.

‘We are so excited to reset this bar with you – with our parents, with our community members, with all of our business partners – as we work together to take our schools, our classrooms back for the future of our kids to have a safe, enjoyable and excitable learning environment with Forney ISD.’ 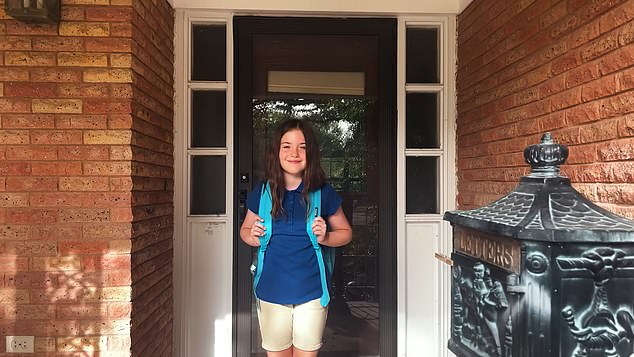 A student is seen in a video discussing the acceptable dress code. Her shorts are accepted because they are not more than three inches above the knee, and they are in one of three colors – khaki, navy and black

Charli XCX shows off her toned figure in a black bikini as she enjoys...

Experts reveals what your phone scrolling habits say about your personality