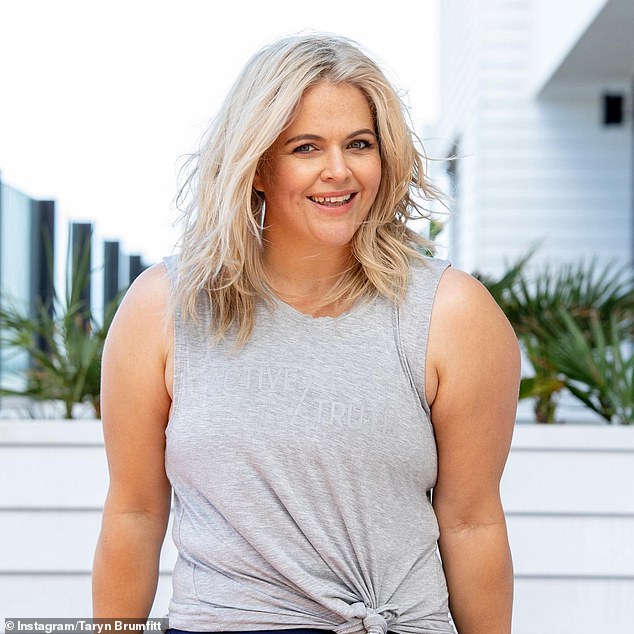 Australian of the Year for 2023 Tanya Brumfitt could never have expected her simple ‘before and after’ photo would be seen by 100 million people and spark a global body positivity movement.

But her pictures smashed a social stereotype of what women should look like and what constitutes health and happiness – the before; a toned and taut Brumfitt at her bodybuilding peak and the after; a bigger, imperfect but clearly happier woman.

The moment would lead the now 44-year-old – crowned as our top Aussie at a glittering ceremony in Canberra on Wednesday night – to become an activist, writer, director and public speaker on a decade-long mission to change how we perceive ourselves.

Tarryn Brumfitt (pictured), 44, has been named as the 2023 Australian of the Year 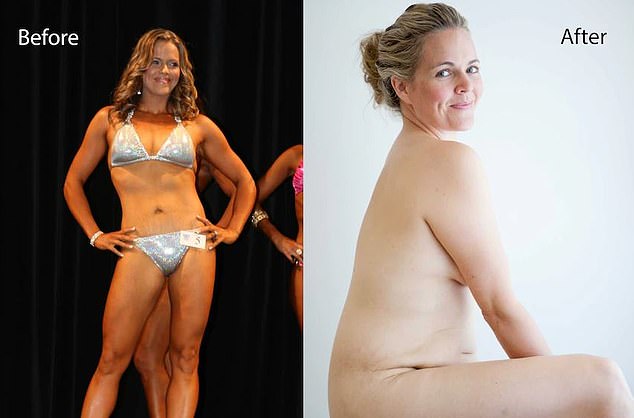 Aussie of the Year Ms Brumfitt has become an internationally recognised public speaker and her ‘Embrace’ series of books and films are a global phenomenon.

The Body Image Movement, which she founded in 2012, teaches people – young women in particular – to love and appreciate their bodies and has taken her to a global audience from her humble hometown of Adelaide.

But she says her mission over the next 12-months as Australia of the year will be dubbed Embrace Men and focus on helping young men cope with many of the same struggles.

‘Men have been left out of the discussion and, like a lot of subjects, they haven’t been asked to explore the feelings that they’re feeling,’ she told the Australian.

‘My biggest concern is around young boys and steroid use, which is on the rise and comes with a whole raft of issues including toxic masculinity and how they treat women.’ 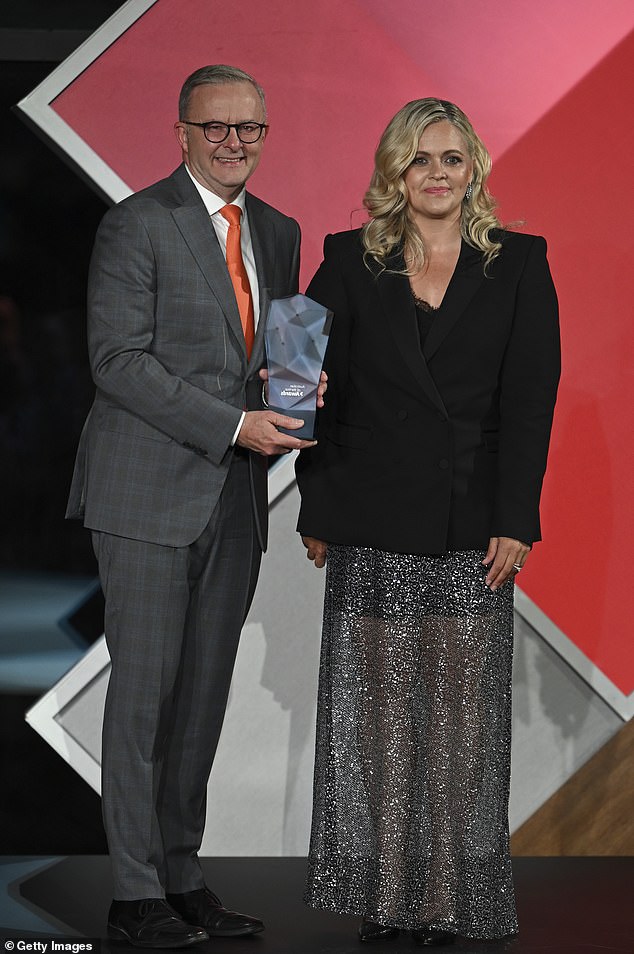 ‘Australia, it is not our life’s purpose to be at war with our body,’ she said.

‘Collectively we are facing some of the most challenging environmental, humanitarian and social issues of our time.

‘What if, instead of spending our days consumed by hating our bodies, we could invest our time together to solve these challenges?

‘What if instead of spending their precious time and energy at war with their bodies our young people were free to become the leaders, big thinkers and game changers the world needs more of right now?

‘It is not our bodies that need to change, it is our perspective.’ 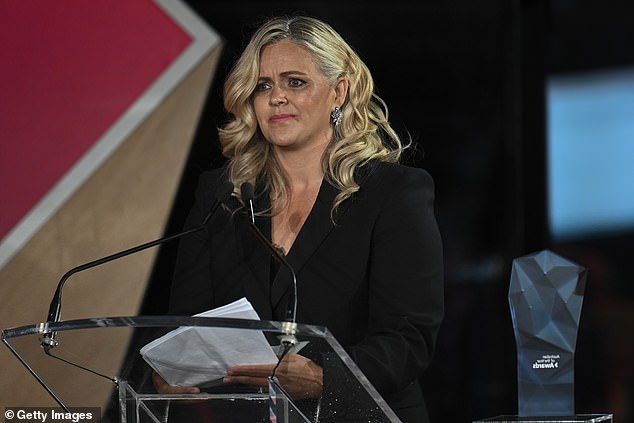 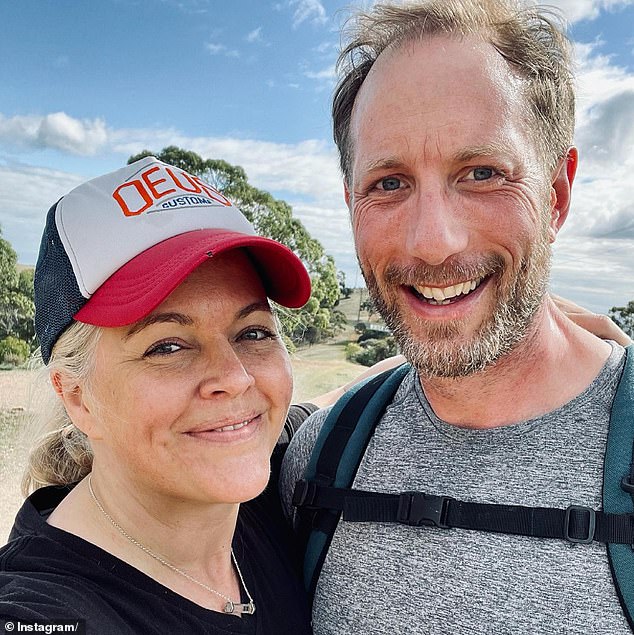 Ms Brumfitt said we as a society have been ‘bullied and shamed into thinking our bodies are the problem’.

‘It’s working because 70 per cent of Australian school children consider body image to be their number one concern,’ she said.

She added that data shows young people with poor body image are 24 times more likely to be depressed and suffer from anxiety.

‘This is not about encouraging obesity, this is not what I do,’ she said.

‘This is not simply about weight or size, it’s about the way that we feel about all of ourselves – our skin colour, our height, our age, our gender, our unique selves and it is learning to move, nourish, respect and enjoy our bodies because you can’t look after something you don’t love.’ 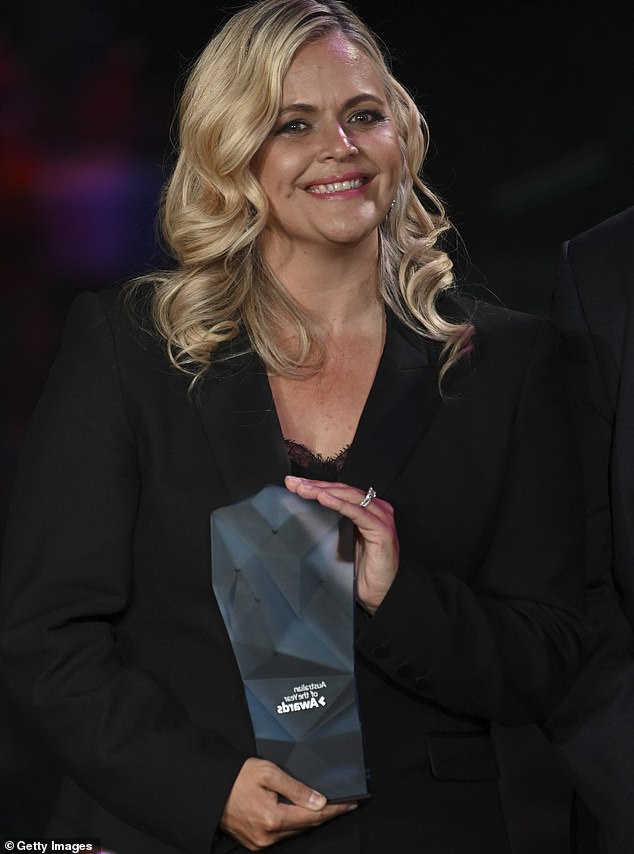 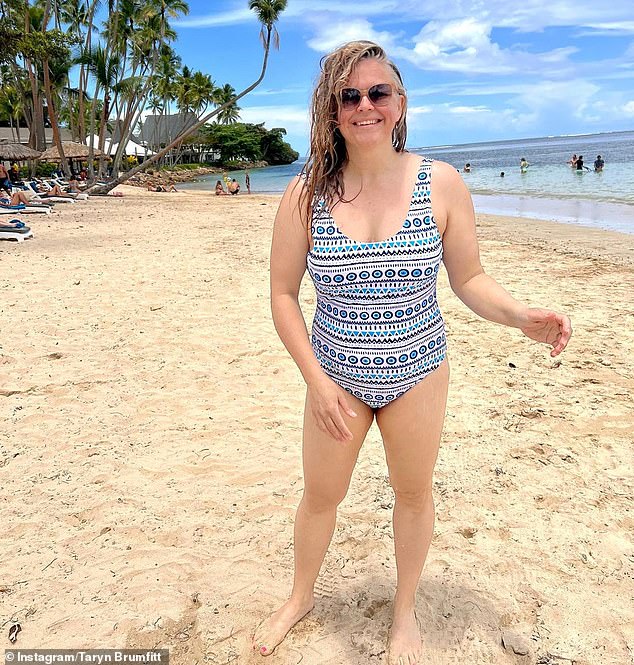 A 2016 documentary she directed, titled Embrace, followed Ms Brumfitt’s own path to body acceptance and was picked up by Netflix and seen by millions of people in 190 countries.

The mother-of-three followed that up with Embrace Kids in 2022 which is aimed at teaching children between nine and 14-years-old to respect, move, appreciate and nourish their bodies.

Reaction to the Australian of the Year winners was overwhelmingly positive on Wednesday night.

‘This is a pretty bloody great list, I reckon. For all of the controversy about the date, these are people we should all be able to get behind,’ one person wrote.

‘Well done Taryn, as someone who has a history of eating disorders, this is pretty important to me!’ another said.

‘What an honor to know and work with you. A wonderful speech with a powerful message,’ former Senator Natasha Stott Despoja said.

Though not everyone was on board with her message of positivity.

‘Aussie of the Year all about body image? Very important issue in third world countries. Great leadership from Australia,’ one sarcastic commenter wrote. 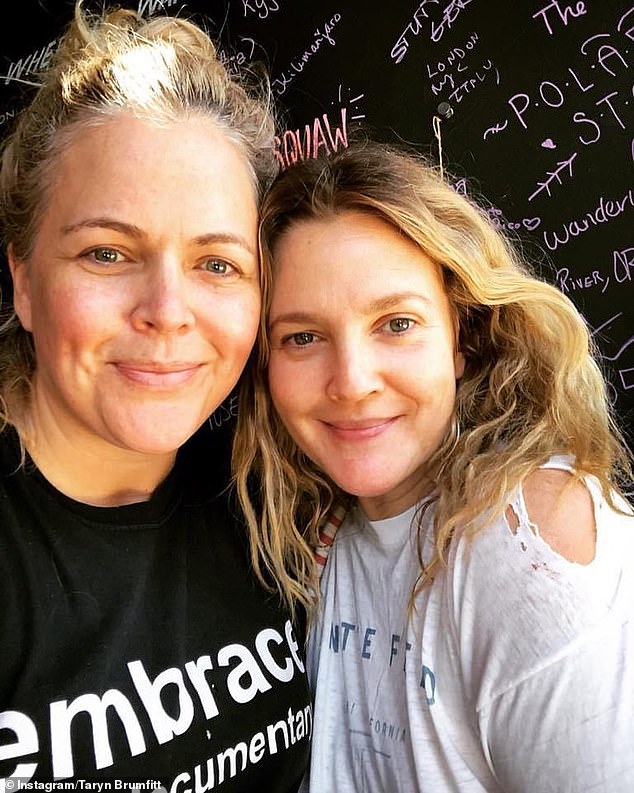 Ms Brumfitt previously wrote for Daily Mail Australia that every young girl should see her mother naked to learn what normal bodies look like and that perfection does not equal happiness.

‘A mother is a girl’s very first and strongest role model – if she sees her embracing her body, seeing its imperfections as the marks left by life’s experiences rather than things to despair about, then she’ll stand a much better chance of having a positive relationship with her own,’ she said.

‘This is a message I feel deeply about, not least because I used to loathe my body, so much so that at my lowest ebb, I considered surgery, in the desperate hope it would make me happy.

She said that after her daughter Mikaela’s birth in 2009 she became obsessed with getting back to how she had looked before she became a mum.

‘I was struggling psychologically to live comfortably with my saggy tummy and droopy boobs. My husband kept telling me that he loved me for who I was rather than the body I was in, but I couldn’t feel that way about myself. He found me beautiful, but I didn’t,’ she said. 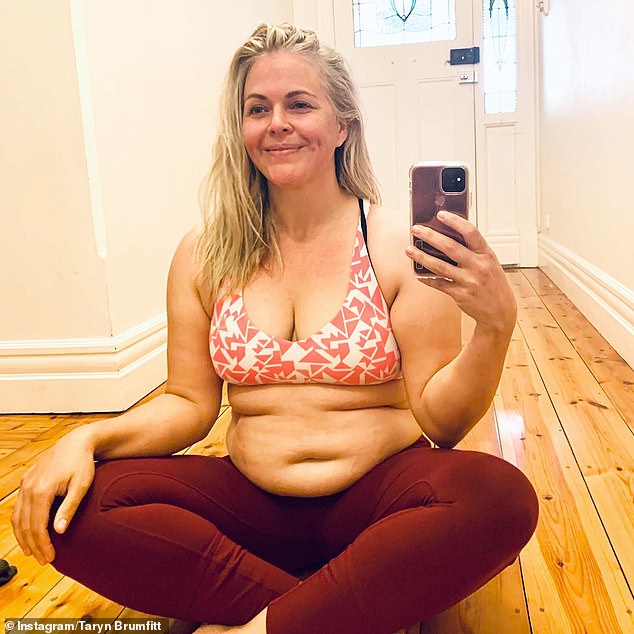 As much as Ms Brumfitt had ‘adored’ carrying children, she said she felt as though her body was somehow broken as a result.

‘So in 2012 I booked myself in for surgery, convinced that it would fix my self-loathing, too,’ she said.

‘But one afternoon in the run-up to my operation, I watched Mikaela playing. She was running around in a swimsuit and as I looked at her I realised that despite the changes her body would experience over time, to me it would always be perfect.’

‘The idea of her having someone cut into Mikaela’s precious skin devastated me, so instead I embarked on a punishing diet and exercise regime, hoping I could regain my figure that way instead.’

For the next three months she hit the gym at five every morning with a personal trainer and painstakingly weighed every morsel that she ate.

‘It worked. Twelve weeks later I had lost 33lb and boasted the kind of bikini body so many women aspire to.’

‘And yet as I stood there with my taut belly and toned thighs, one thought ran on a loop inside my head: it wasn’t worth it.’

She said going from a size 14 to a size 8 had stopped her playing with her children and sharing meals with her family, two ‘simple pleasures’ she would not get back.

And food had become something to scrutinise rather than look forward to.

‘I’d somehow managed to make myself even more dissatisfied than before,’ she said.

I’d sacrificed too much, while sending out a message to Mikaela that my body wasn’t good enough the way it was.

‘It was a defining moment and from then on, I was clear in my mind that I was going to live a life where I embraced my body, whatever its shape or size.’

‘A switch had been flicked inside my brain. My body wasn’t an ornament to be admired — it was a vehicle to carry me through a rich and fulfilling life.’ 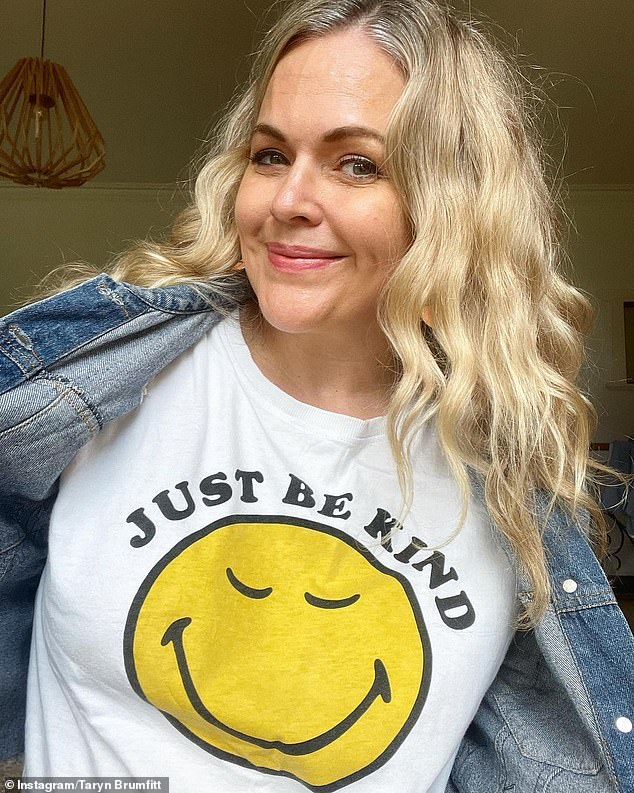 She also took aim at popular fitness influencers were she said were banking a million-dollar industry from women’s low self-esteem.

‘Transformation programs like Michelle Bridges and Kayla Itsines are preying on women’s insecurities and luring them into a false pretence that they will have a body as good as theirs in 12 weeks,’ Ms Brumfitt said.

She claimed one of the main problems with these kinds of programs is that they constantly share information about the diet, weight loss and the transformation but don’t share the reality of an individual’s situation.

‘They tell us about all the success stories, we see the before and after photos but we rarely hear about the kilos that are gained afterwards,’ she said.

‘It’s time to pull in the Weight Watchers, the Jenny Craigs and all the transformation programs out there because they’re putting people on a cycle of dieting, weight loss and weight gain.

‘If the current weight loss solutions that are widely and aggressively promoted actually worked, then why do we have this obesity epidemic?

‘It’s important that we get the message across that it isn’t about promoting mediocrity and obesity, it’s about forcing women to connect, nourish, move and enjoy their bodies,’ she said.

Another issue that Taryn has with these kinds of programs is that they tend to focus on how you look, how much you weigh, the calories you consume and your BMI.

‘When women chase a body type that’s not naturally theirs by using methods like scales and calories in, calories out, it leads to a route of failure and weight cycling,’ she said.

‘I understand weight cycling because I’ve been there, I’ve done it.’

2023 Senior Australian of the Year

Professor Tom Calma AO from the ACT,  an Indigenous human rights and social justice campaigner, was named the Senior Australian of the Year. 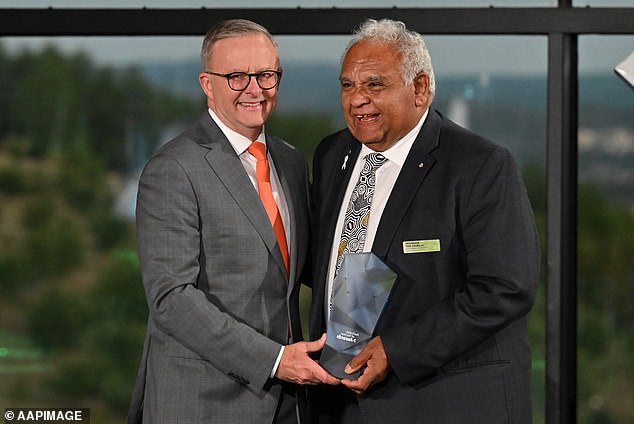 His work over decades laid the foundation for the Close the Gap campaign.

He is already an Order of Australia recipient in recognition of his work as an inspirational advocate for human rights and distinguished service to the Indigenous community.

2023 Young Australian of the Year

Socceroo and Barefoot to Boots charity founder Awer Mabil was named the Young Ausrtalian of the Year. 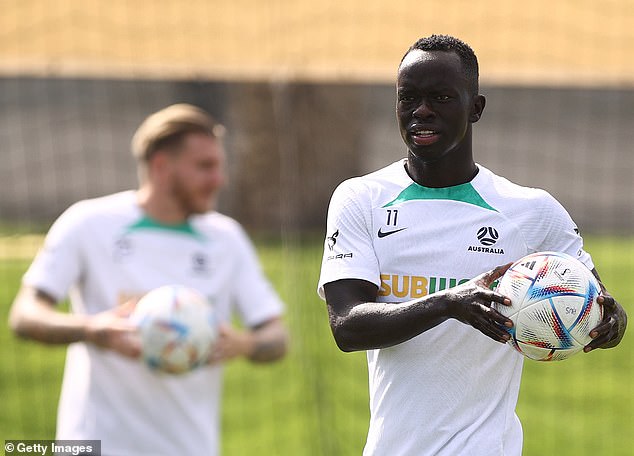 Originally from Kenya before moving to South Australia, he founded the charity with his brother to promote health, education, and gender equality outcomes for refugees using football as a doorway to connect.

The 27-year-old also scored one of the penalties that secured Australia a place in the World Cup, saying that kicking the crucial goal was ‘the only way to say thank you to Australia on behalf of my family’.

Amar Singh from NSW, who through his Turbans for Australia charity has tirelessly helped thousands in the community, is Australia’s Local Hero for 2023.

Founded in 2015 his charity delivers food hampers to those in need and has helped victims of bushfires and floods which have plagued the country in recent years with food and accommodation relief. 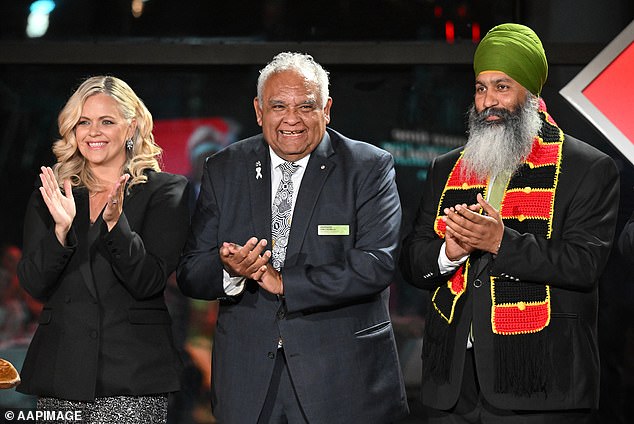 2023 AUSTRALIAN OF THE YEAR FINALISTS

AUSTRALIAN OF THE YEAR

2023 SENIOR AUSTRALIAN OF THE YEAR FINALISTS

2023 YOUNG AUSTRALIAN OF THE YEAR FINALISTS

I’m a Celebrity… Get me Souvenir! Matt Hancock novelty merchandise spring up on eBay

Elon Musk accuses AOC of FLIRTING with him after tweet blaming him for ‘explosion...

Are YOU suffering an abandonment wound?