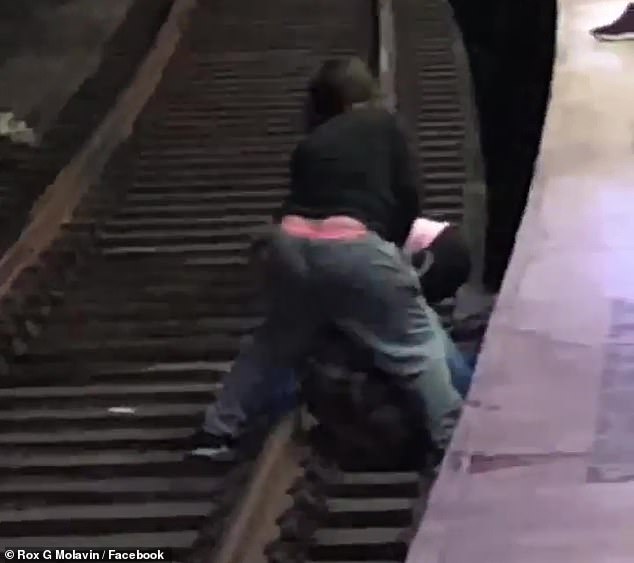 EXCLUSIVE: Heart-stopping moment a Sydney train speeds towards an unconscious passenger on the tracks while a hero bystander leaps onto the rails to help – but others ask why NO-ONE else assisted

A hero bystander bravely stood her ground to help an injured passenger who fell onto the rails as a speeding train ground to a halt just millimetres away from her.

Amazingly the pair both cheated death by the merest of margins after the man had fallen head first onto the tracks following a fainting episode at the platform’s edge.

Incredible video of the incident shows the woman struggling to help the man up off the rails at Redfern station in Sydney‘s inner-west as the train bears down on them.

Just two women courageously got down on the tracks to try to lift the elderly man to safety while others simply watched on in horror, sparking furious debate online.

Sydney commuter Rox G Molavin filmed the incident and told Daily Mail Australia he was thankful the injured man didn’t die while he was recording.

A man cheated death recently after falling head first onto the tracks of a busy station – with a train just a couple of minutes away (pictured, the scenes from Redfern in Sydney on April 1)

His footage repeatedly swings from the man on the tracks to the overhead monitors announcing the imminent arrival of the next train to the tunnel where it quickly appears.

Station staff desperately signal to the driver with urgently-waved red flags to stop as soon as possible and he slams on the anchors while the now lone woman remained beside the injured man.

The train manages to pull up just short of the woman, who calmly stands with her back to the engine with the man at her feet. 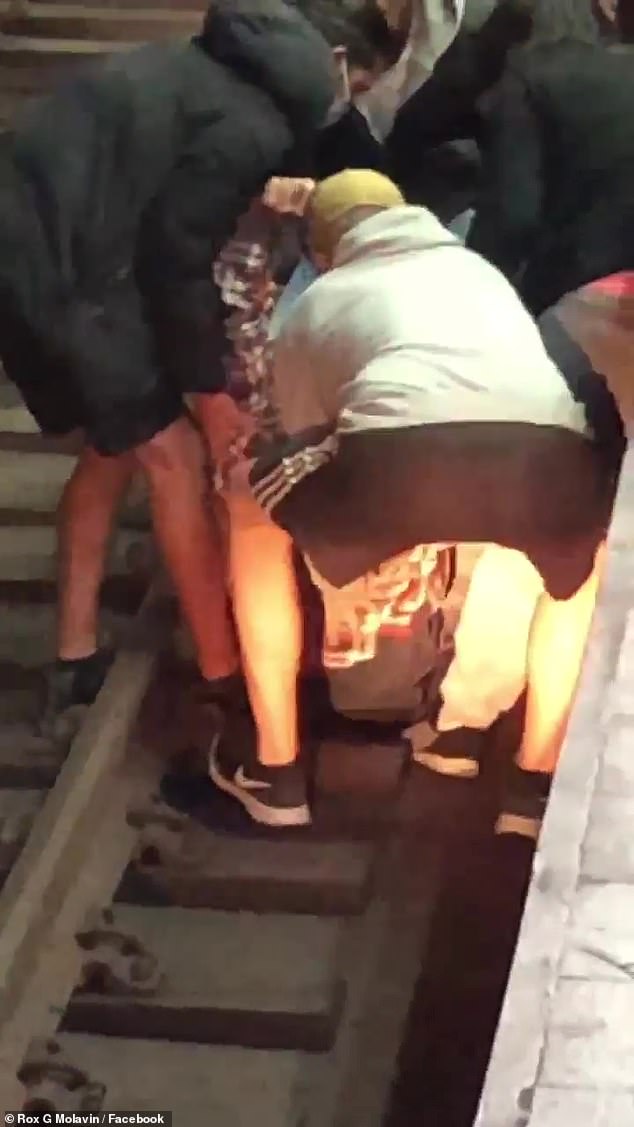 The man is believed to have fainted at Redfern, with the scenes horrifying for many witnesses

‘I wasn’t sure what to do myself…I didn’t know what was going to happen,’ the Sydney-Filipino community leader said.

‘You have a duty of care to a fellow person, but there was plenty going on.

‘People were screaming as the train was coming closer – I heard it over the speaker – so I feared the worst.

‘The guy was a large man, it took a few people, I think six, to help him.

‘It was all very confronting, and it reminded me the importance of standing a safe distance back on the platform at all times.’

Mr Molavin said the elderly man – believed to be in his 70s – had lost consciousness while waiting for the train to arrive from the city.

He then fell head first onto the tracks, sparking chaos.

Police and emergency services arrived soon after the man and woman’s miracle escape and the elderly man was helped back on to the platform and taken away for treatment. 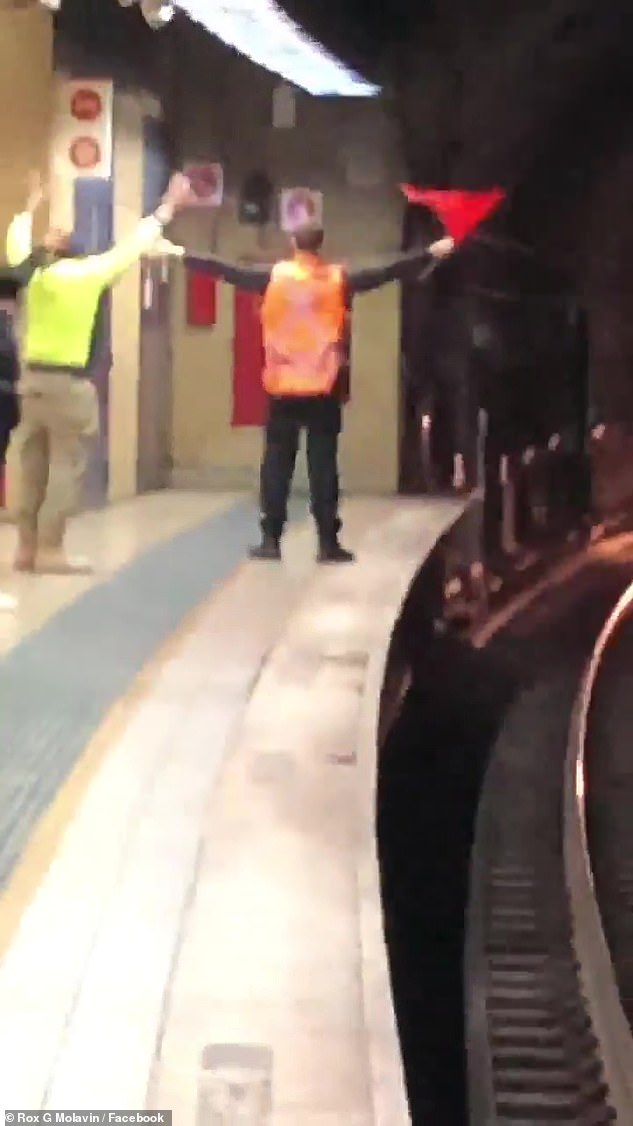 A number of Sydney train employees left the driver know of the situation, with the injured man still on the platform as the train pulled in at Redfern 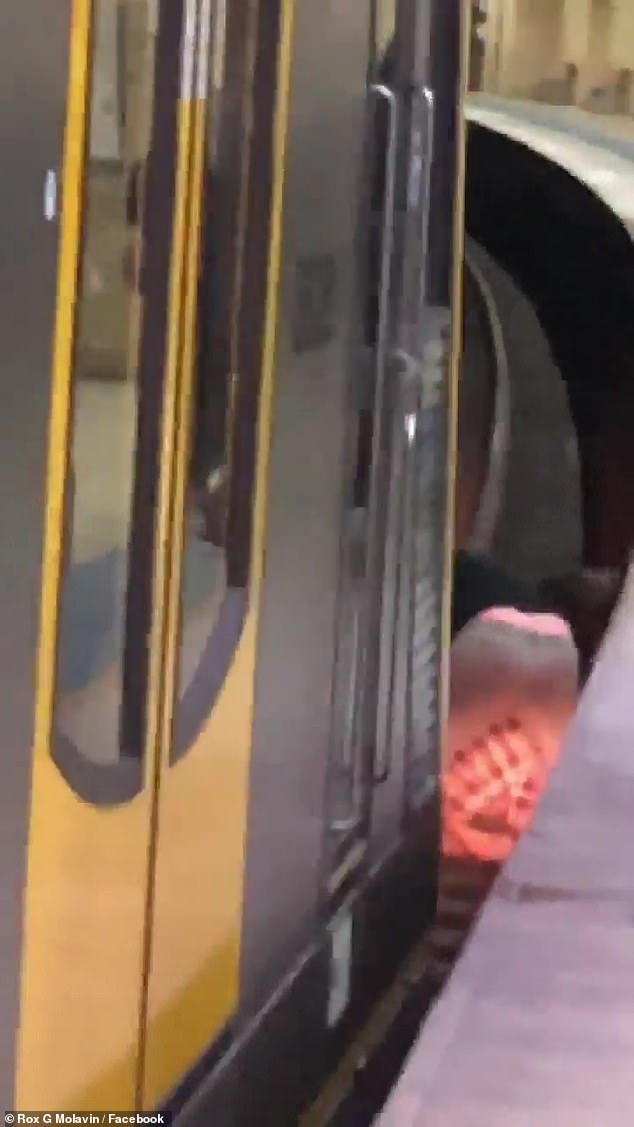 In heart-stopping scenes, the driver managed to pull up just millimetres from the man and woman on the tracks (pictured)

The video divided opinion on Facebook, with plenty left puzzled as to why other people didn’t render assistance from the platform.

‘Everyone standing around watching and not helping,’ fumed one person.

Another added: ‘This is disgusting, every single one of those people on the platform should of been down there helping from the get go…smh (shaking my head).

But a third pointed out if the man on the tracks had suffered a spinal injury, those who moved him suddenly could potentially be financially liable.

Ash Barty details the moment she decided to QUIT tennis forever in her new...