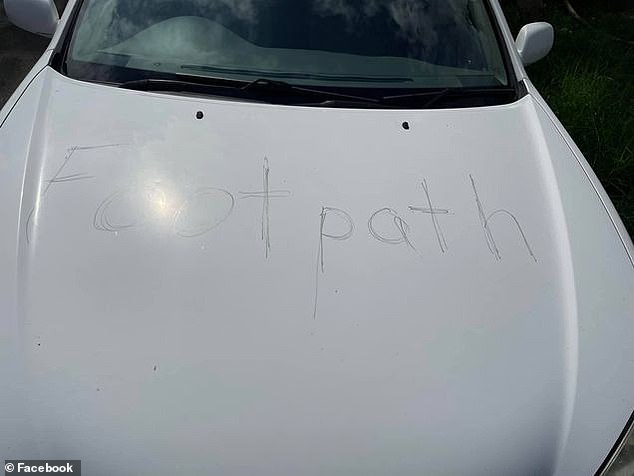 A mother-of-three was ‘absolutely sickened’ after a neighbour criticised the parking of her elderly parents’ car by writing on it in permanent marker.

The woman’s parents, who are both in their 70s, were babysitting their grandchildren at their daughter’s home in Sydney‘s north shore when the vandalism occurred.

When they returned to the car, they found ‘footpath’ scrawled in the difficult to remove ink across the bonnet.

It was the first time in six years she left her three children overnight only for her relaxing weekend away was ruined when she returned home and found the nasty message.

The north shore local posted her horror to the local community’s Facebook group appealing for any information.

‘My dad parked in our driveway to help my mother get closer access to the house given her abilities,’ she wrote.

‘In doing so, they were blocking the footpath but walkers could still walk around the back of the car.’

The woman explained that her parents were going to move the car but did not get the chance because her three young children needed constant supervision.

The couple went to move their car at 9am on Sunday morning when they saw the permanent marker across the bonnet of their white Toyota Camry.

‘I totally understand the concerns of blocking the footpath but to write with permanent marker all over their front bonnet is disgusting erratic behaviour and I’m absolutely sickened to think a person such as this lives nearby,’ the post read.

‘This is vandalism and is illegal!! I feel so sorry for this person in every way as they would have had so much hatred at the thought of walking around a car to go home and get a marker, come back and vandalise a car. 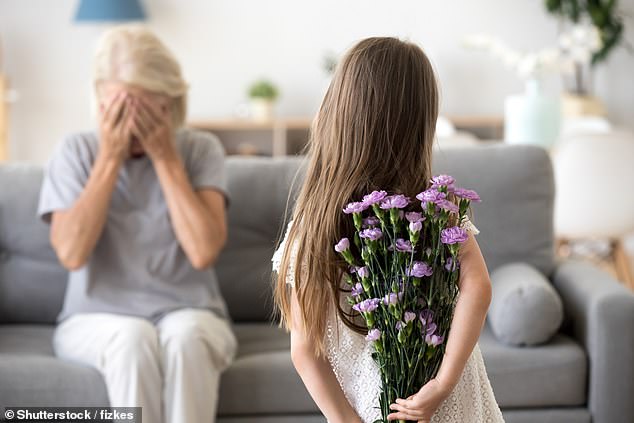 The woman said that her parents, who are both in their 70s, had every intention to move their car but could not leave her three children unattended

‘Just WOW!!! Next time be a big enough person to ring the doorbell and advise [us] directly so we can fix this in an amicable way and you can walk the straight path that you so desire. Or if you wish to remain anonymous write it on PAPER!’

She ended with an appeal for more information and urged locals to come forward if they witnessed anything suspicious.

The post received a divided response as many sympathised with the woman while others believed her parents should have seen it coming.

‘Wow I can’t believe someone did this what an arsehole!!!! Your poor parents I hope they are ok and not too upset,’ one local wrote.

‘What a bitter sad person who did this. I pity their miserable existence! Karma will give them a serve don’t worry,’ another commented.

A disapproving local wrote: ‘Unpopular opinion, but I don’t have much sympathy available for this. Don’t block the footpath. Easy as.’

‘My elderly grandmother, who was disabled and couldn’t simply ‘walk around the back’ used to encounter this problem all the time,’ another commented.

‘Vandalism is illegal, but so is parking across the footpath. If the mother has mobility issues, then they should have had more awareness themselves,’ another comment read.

Footage shows beagles in pain and monkeys in neck restraints as they are force-fed...

PICTURED: Missing girl, 10, who is feared to be victim of Texas elementary school...