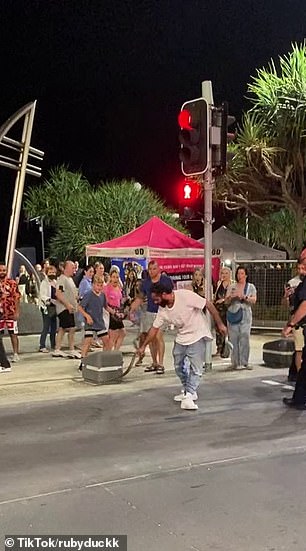 Incredible moment a brave man dragged a SNAKE to safety after the huge python got stuck on a busy road: ‘Only in Australia’

A lost snake dodging traffic on a busy main road has been rescued by a man who dragged it onto the beach with his bare hands, in footage captured by stunned onlookers.

The carpet python had appeared on the beachfront at Surfers Paradise in Queensland on Saturday, a rather unusual visitor to the tourist hotspot.

In video filmed by shocked passersby, the snake is seen in the middle of the road, having several near misses with oncoming traffic.

But then a man steps out from the footpath and picks up the snake by its tail, holding it at an arms distance as he carries it off the road and towards the beach.

An onlooker yells out ‘legend!’, as the crowd watches and films the daring rescue. 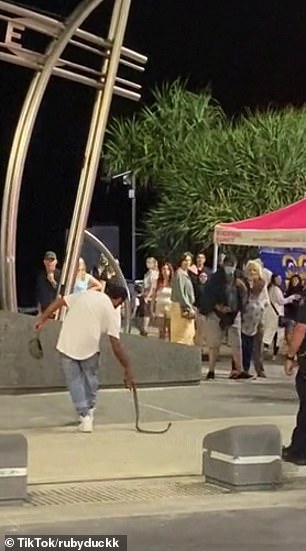 Passersby look on in shock as the man picks up the snake with his bare hands (pictured, left and right) 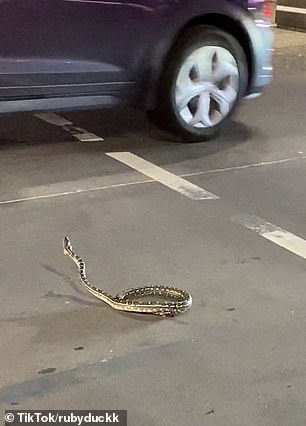 The promenade backs onto a 2km long stretch of sand, Queensland’s Surfer’s Paradise, hailed as one of Australia’s most pristine beaches.

Carpet pythons are the most commonly found snake in suburban areas, however one local viewer said that they had ‘never seen a snake in my 10 years of living here’.

A medium sized snake, carpet pythons are recognised by the markings on their backs, resembling an oriental carpet pattern.

Although non-venomous, a bite from this snake would cause considerable damage to a human.

Viewers were astonished by the scene, praising the man for his bravery and kindness.

Would you pick up a snake?

‘Bless the guy who got him off the road’, one user said whilst another agreed, saying ‘Well done to the lad who got it off road!’

Other viewers were critical of the people who didn’t help.

‘So many people and only one who dared to pick it up’, one viewer added.

‘Only in Australia’ this would happen seemed to be the main punchline for viewers.

‘Pretty sure someone is just dropping pythons off around the place to create Straya Tik Toks’, one joked.

Thousands on the streets of Sao Paulo for 26th Gay Pride Parade after two...

The Bachelorette’s Adam Todd eyes up career in Hollywood after role in Thor: Love...