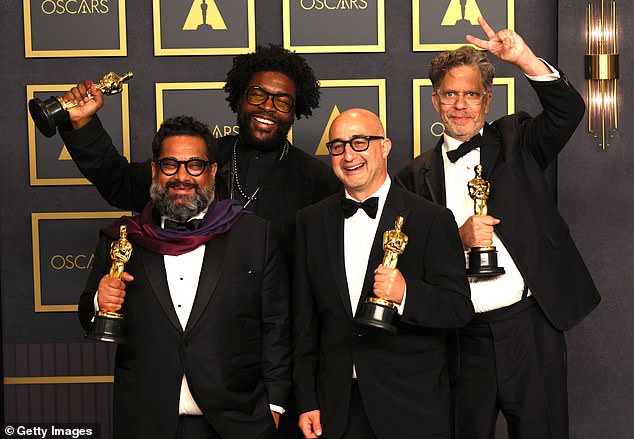 An Oscar-winning producer has slammed Will Smith and Chris Rock for robbing his film, and documentary category as a whole, of its moment to shine last Sunday night at the Academy Awards.

‘I think what Will did was selfish,’ Summer of Soul producer Joseph Patel wrote Wednesday in a since-deleted Twitter thread, claiming Smith slapping Rock ‘robbed the category of its moment.’

‘It robbed the other excellent and amazing films of their moment to be acknowledged in what was a STRONG year for docs,’ Patel claimed. ‘And it robbed Summer of Soul and our team of our moment. Of a loud, enthusiastic cheer for a celebrated film.’

Patel also accused Rock of being an ‘absolute f*****g d**k’ for allegedly making a racially insensitive remark when he announced Summer of Soul had won the Oscar for Best Documentary Feature.

‘I’m angry,’ Patel wrote. ‘Angry at Will Smith. Angry at Chris Rock. Angry for me. Angry for Ahmir. Angry for my fellow filmmakers.’

Summer of Soul producer Joseph Patel (left) has slammed Will Smith and Chris Rock for robbing his film of its moment to shine last Sunday night at the Academy Awards. Patel is pictured with fellow Summer of Soul contributors (L-R) Ahmir Thompson, David Dinerstein and Robert Fyvolent

Patel claimed he didn’t initially hear Rock’s remark as he was ‘still trying to make sense’ of the on-stage attack, but was informed of it after he received his Oscar.

‘What I didn’t hear in that moment walking to stage but was told of afterwards is what Chris Rock said when reading our name from the winner’s card – The winner is ”Summer of Soul …Ahmir ‘Questlove’ Thompson and 4 white guys.” WHAT IN THE ACTUAL F**K?????’ he tweeted.

‘The reason that makes me SO SO VERY ANGRY is because I was so proud to be one of a handful of South Asians to have ever won an Oscar in the history of the award.’

‘So with my family and friends watching, Chris Rock lumped me in as 1 of ‘4 white guys. (Nevermind the disrespect to @d2films and @fyvo for not even saying their names, and the inaccuracy of us being 3 producers not 4),’ Patel added, referencing the two other South Asian men who won Oscars last Sunday. 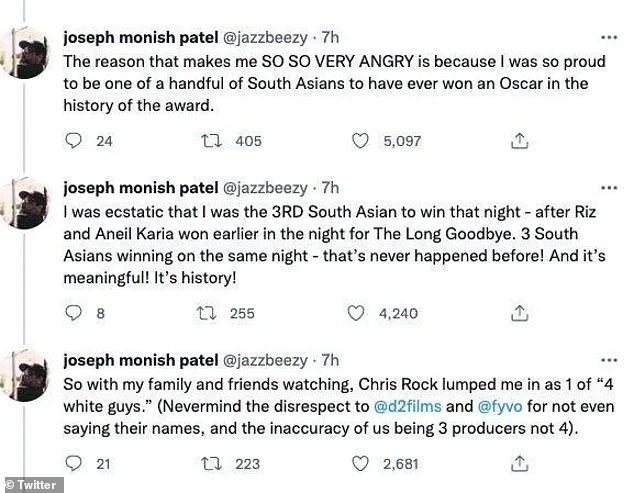 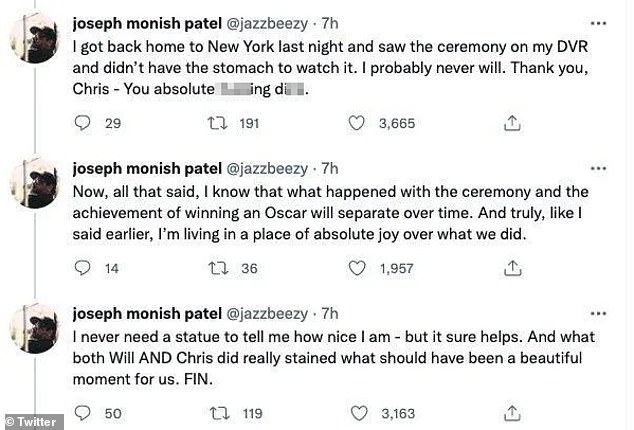 In a since-deleted Twitter thread, Patel said the pair ‘robbed Summer of Soul’ of its moment and also accused Rock of being an ‘absolute f*****g d**k’ for reportedly saying the winner of the documentary category was ‘Ahmir ‘Questlove’ Thompson and four white guys’

The producer claims he recorded the ceremony on his DVR, but when he got home to New York, he ‘didn’t have the stomach to watch it.’

Despite his frustrations, Patel did applaud Thompson for handling the seemingly uncomfortable encounter with ‘grace and giving a speech from the heart.’

He also detailed that he made the decision to delete his tweet thread after it went viral because it had become ‘unproductive.’

‘We reached the unproductive portion of the viral Twitter thread so I’ve deleted it,’ Patel wrote. ‘I said what I needed to say and feel at peace with it.’

He added: ‘Some of y’all are weirdos.’ 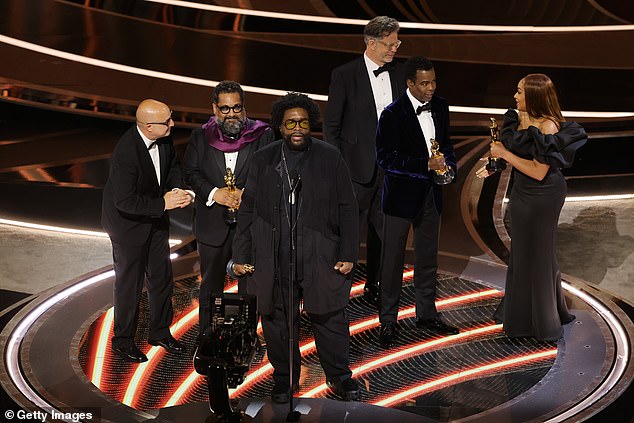 Despite his frustrations, Patel did applaud Thompson for handling the seemingly uncomfortable encounter with ‘grace and giving a speech from the heart’. The Summer of Soul team is seen accepting its Oscar for best documentary feature 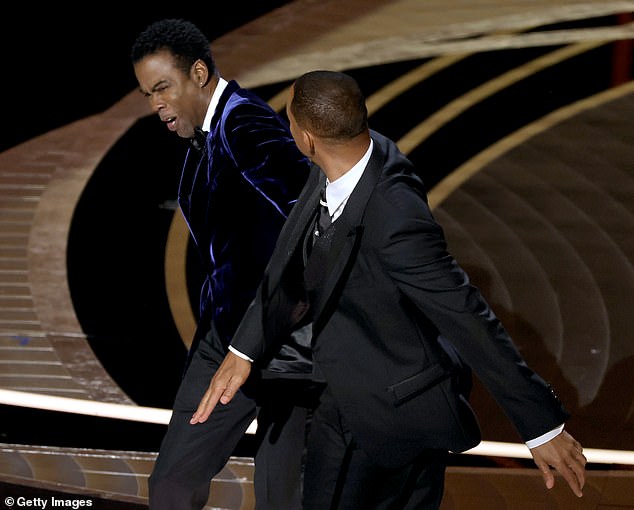 While neither Rock nor Smith have publicly acknowledged Patel’s rant, the King Richard actor did issue an apology to all winners of the 94th Academy Awards when he announced his resignation from the Academy of Motion Picture Arts & Sciences on Friday. Smith is pictured slapping Rock during last Sunday’s Oscars

While neither Rock nor Smith have publicly acknowledged Patel’s rant, the King Richard actor did issue an apology to all winners of the 94th Academy Awards when he announced his resignation from the Academy of Motion Picture Arts & Sciences on Friday night.

Smith, in a statement first obtained by Variety on Friday, called his actions during the ceremony ‘shocking, painful and inexcusable,’ adding that he would accept any additional consequences issued by the Academy’s Board of Governors.

‘The list of those I have hurt is long and includes Chris, his family, many of my dear friends and loved ones, all those in attendance, and global audiences at home,’ Smith stated.

‘I betrayed the trust of the Academy. I deprived other nominees and winners of their opportunity to celebrate and be celebrated for their extraordinary work. I am heartbroken.’ 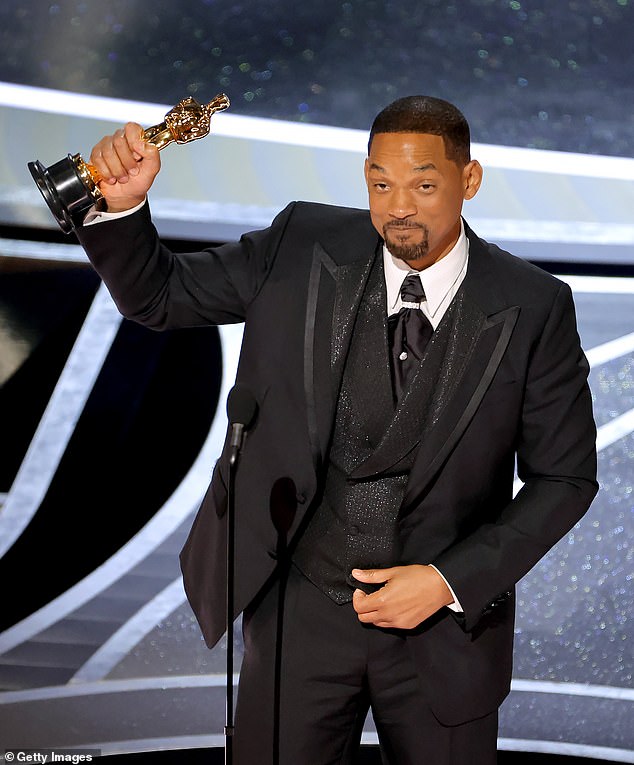 The actor also acknowledged that slapping Rock during the ceremony caused other award winners to be overshadowed.

‘I want to put the focus back on those who deserve attention for their achievements and allow the Academy to get back to the incredible work it does to support creativity and artistry in film,’ Smith said.

He also shared how ‘change takes time’ and he is now ‘committed to doing the work to ensure that I never again allow violence to overtake reason.’

Smith’s resignation came two days after the Academy met to initiate disciplinary proceedings against him for violations of the group’s standards of conduct.

The Academy announced Friday it has accepted Smith’s ‘immediate resignation’ and will ‘continue to move forward’ with its disciplinary hearings.

How man has changed his best friend: Experts reveal what dogs USED to look

EMILY PRESCOTT: Prince Harry is ‘living his dream in the US playing polo’, reveals...