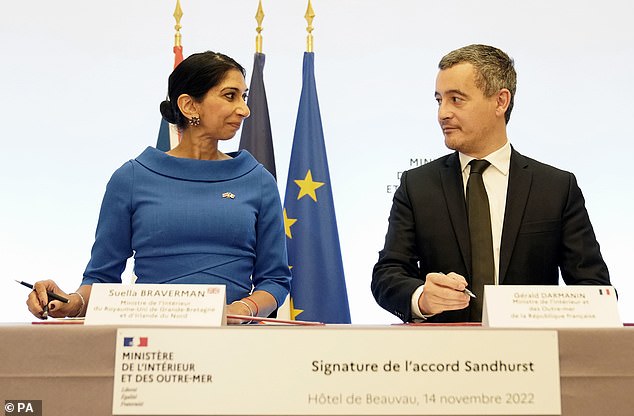 The pact agreed by the Home Secretary – expected to be accompanied by a £60million-a-year funding package – includes a 40 per cent boost in the number of officers patrolling beaches.

British staff will also be embedded in French control rooms for the first time under the landmark plans to clamp down on dangerous small boat crossings, as the number of people making the perilous journey to the UK so far this year topped 40,000.

Further measures signed off in Paris include an investment in CCTV and dog detection teams to keep tabs on ports and plans to better equip officers with drones and night vision capabilities.

Meanwhile, Britain and France have agreed to step up co-operation on the issue with European partners, with a meeting of the ‘Calais Group’ of neighbouring countries to be scheduled as soon as possible.

It comes as Braverman examines a series of plans to find less expensive accommodation for Channel migrants which could see them housed in disused holiday parks.

Home Secretary Suella Braverman (pictured) will announce a deal with France today to tackle the Channel crisis after the number of migrants to land on England’s beaches this year passed 40,000 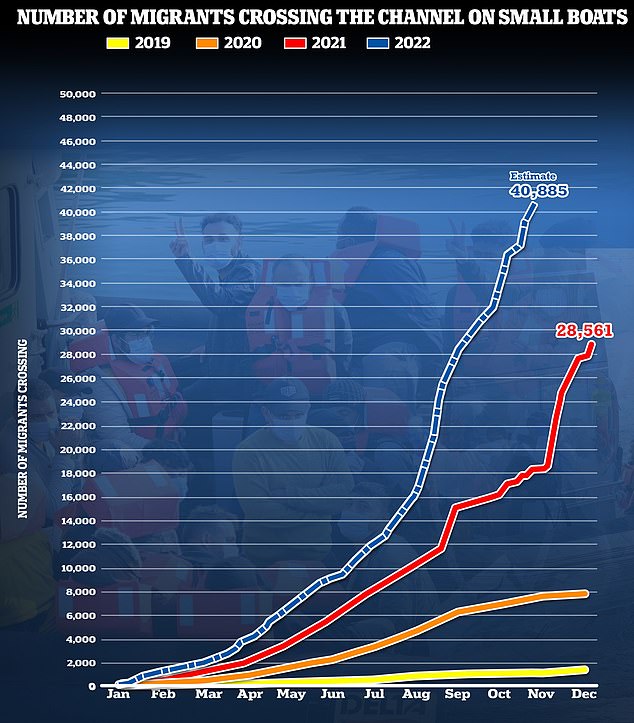 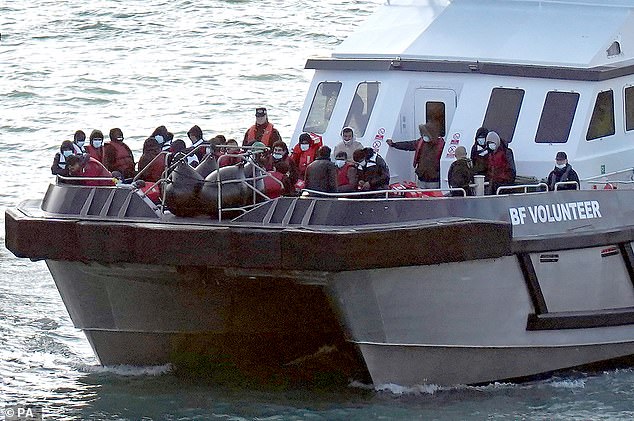 A group of people thought to be migrants being brought in to Dover, Kent, on a Border Force vessel last month

The UK’s annual contribution to policing the border is set to rise from around £54million to the equivalent of just above £62million.

A new taskforce will also be established to address the ‘recent rise in Albanians and organised crime groups exploiting illegal migration routes’ into Western Europe, No 10 said.

Lastly, the deal pledges investment in French reception and removal centres for migrants who are prevented from making the crossing to the UK.

Downing Street said the 40 per cent increase in the number of officers patrolling beaches in northern France would ‘increase early detection’, while the presence of UK staff in French control rooms would boost understanding of the ‘threat’ at hand and help inform deployments.

The boost in port surveillance is designed to crack down on migrants attempting to enter the UK on lorries.

A gang member allegedly behind the deadliest migrant drownings in the Channel is living in Britain and claiming asylum, a TV documentary will claim tonight.

The man, of Kurdish descent, is said to have helped migrants find a seat on an inflatable boat which capsized, killing 31 last November.

The documentary investigated those behind the disaster and spoke to survivor Issa Mohammed who told how he saw ‘bodies floating by’.

Presenter Handa Majed is seen speaking by phone to a source who said the smuggler has been seen in Birmingham.

‘He came across the Channel in an inflatable. He changed his name and is claiming asylum,’ the source says.

The documentary claims the man was put in a hotel in the Midlands and wants to start a business but it was unable to find him.

The Crossing will be broadcast on ITV at 10.45pm tonight.

Rishi Sunak said he is ‘confident’ the number of small boat crossings would come down over time after the number of people making the perilous journey to the UK across the Channel so far this year topped 40,000.

Speaking to reporters travelling with him to Indonesia for the G20 summit, Mr Sunak said he was ‘pleased’ to be signing the deal with France, while confirming that the annual amount paid by the UK will increase to 72 million euros (£63 million).

‘A couple of highlights are a 40 per cent increase in the number of patrols happening, and for the first time, British officials embedded in French operations to strengthen co-ordination and the effectiveness of our operations,’ he said.

‘But that isn’t the end of our co-operation. What the agreement says is that should be a foundation for even greater co-operation in the months ahead.

‘When it comes to migration more generally, I do think that the absolute priority that the British people have right now, as do I, is to grip illegal migration.

‘I made a commitment that I would grip it in the summer. And I can tell you all that I’ve spent more time working on that than anything else – other than, obviously, the autumn statement – over the past couple of weeks.

‘Look, I’ve been honest that there’s not a single thing to do to fix it and we can’t fix it overnight.

‘But there’s a range of things I’m working on, including the French deal, where I’m confident we can bring the numbers down over time and that’s what I’m going to deliver.’

The source added: ‘The focus of the agreement will be on breaking up the people smuggling gangs, using better technological surveillance, including more drones.’ Britain has paid some £175million to France to police the Channel border since 2018.

Mr Jenrick has vowed to put a stop to ‘Hotel Britain’ which has seen taxpayers fork out £6.8million a day to put migrants in ‘unsuitable’ accommodation.

‘Hotel Britain must end, and be replaced with simple, functional accommodation that does not create an additional pull factor,’ Mr Jenrick wrote in The Sunday Telegraph.

He added: ‘Accommodating these record numbers is extremely challenging, and a chronic shortage of acceptable accommodation has forced the Government to procure expensive, and frequently unsuitable, hotels at an unacceptable cost to the taxpayer.

‘Human decency has to be accompanied by hard-headed common sense: illegal immigrants are not entitled to luxury hotels.’

The Government’s crackdown came after the provisional total number of migrants who arrived in Britain on small boats this year hit 40,885 – with more expected yesterday.

Thousands have now been waiting for over a year for their asylum applications to be processed. Shockingly, 725 people, including 155 children, have been waiting for more than five years, the Refugee Council charity said.

A Home Office spokesman said the system was under ‘incredible pressure’, adding: ‘We are doing everything we can to address this issue. We have increased the number of caseworkers by 80 per cent to more than 1,000, and a successful pilot scheme has seen the average number of asylum claims processed by caseworkers double. We are now rolling this out across the country.’

The spokesman also said applications from children were being prioritised ‘where possible’.

LA Mayor Eric Garcetti reveals he was the victim of sexual harassment in high...

Freeze The Fear’s Wim Hof credits the extreme cold for saving him following his...