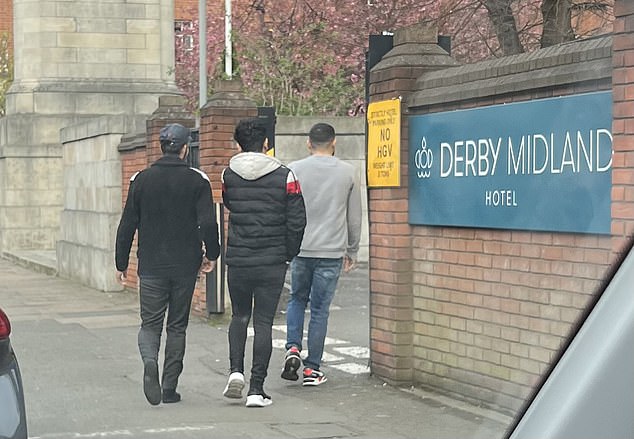 At Easter, the four-star hotel close to Britain’s most popular theme park, Legoland, is usually full of holidaymakers.

Visitors rave about the spa and the swimming pool plus the fact that it’s a short hop to Windsor Castle, Ascot racecourse and the moorings of river Thames pleasure boats.

But this weekend, the Holiday Inn in Maidenhead, Berkshire, was closed to tourists, outraging Britons who were hoping to stay there. It is now the home of migrants who have sailed across the Channel after paying traffickers thousands of pounds a head for the 21-mile journey.

More than 1,200 people arrived on our shores on two days alone last week, pushing the total close to 6,000 already this year.

To tackle the crisis and smash the trafficking gangs, Home Secretary Priti Patel last week announced a plan to fly asylum seekers to Rwanda in East Africa, on a one-way ticket.

Boris Johnson said the policy would form a centrepiece of an immigration revolution that would bring an end to hotels being used to house migrants ‘at vast public expense’.

The bill for boat migrants staying in 100 hotels across the country is nudging £5million a day.

The Daily Mail has visited four hotels housing the newcomers, and found that families are furious they have had their bookings cancelled and can’t use the facilities because the establishments are now full.

The Maidenhead hotel is a case in point. It suddenly closed to the public and even refunded local residents’ subscriptions to the gym on the site. 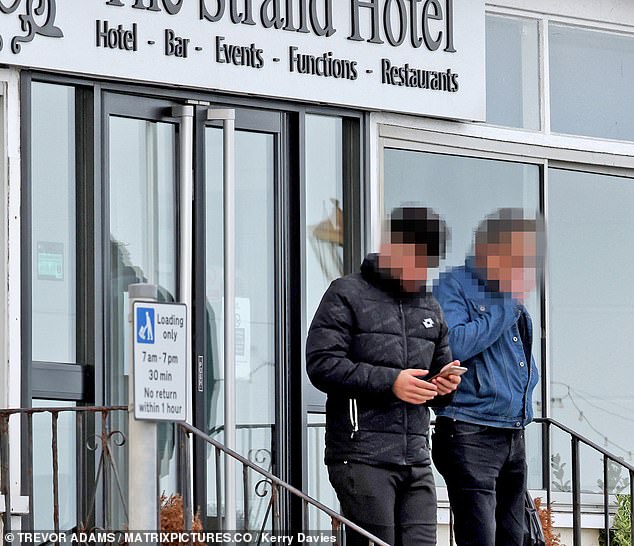 On the beachfront: Men leaving the Strand Hotel in Eastbourne, Sussex

Its website still boasts: ‘Explore the Queen’s home at Windsor Castle, have a day out with the kids at Legoland Windsor Resort, or experience the excitement of horse racing at Ascot racecourse, all within a short drive

‘Swim laps in our heated indoor swimming pool, lounge around in our whirlpool hot tub, work out in the gym or simply relax in the sauna and steam room.’

But, of course, visitors who would be happy to pay can do none of this.

Duncan Sharkey, chief executive of the local council, said he had recently been informed by the Home Office that the Holiday Inn would be used for ‘the foreseeable’ future to accommodate migrants ‘claiming sanctuary’. He added that the takeover of the hotel meant it was closing to the public and was a ‘private arrangement’ with the Government.

On Thursday night, migrants – mainly young men speaking Arabic – wandered in and out of the establishment, while some sat in the gardens.

The building is ringed by security guards who told the Mail that ordinary visitors were no longer welcome as the Home Office had taken it over. The abrupt change has annoyed tourists. In one internet review, a would-be guest said: ‘I had a few days booked at Legoland with my children. Got a call today cancelling [the hotel] for no reason – now I know the reason.

‘I won’t be using Holiday Inn again as it seems they are seeking bigger contracts with the Home Office. Thanks for ruining our rare family break away.’

Another said: ‘Two holidays to see daughter and grandchildren in Maidenhead cancelled. We have been to this hotel many times before… I hope the new guests appreciate it. We had blanket cancellations and no help at all.’ 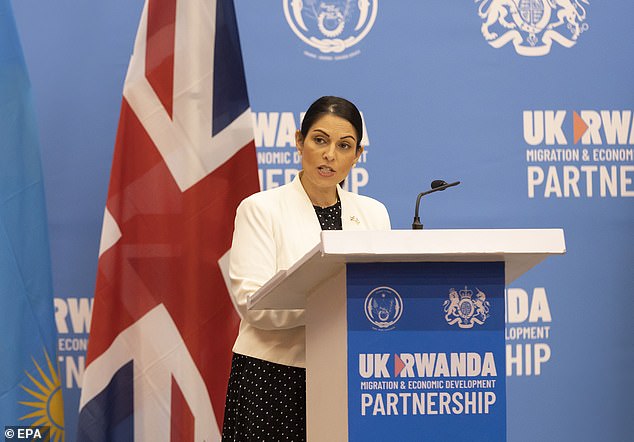 To tackle the crisis and smash the trafficking gangs, Home Secretary Priti Patel last week announced a plan to fly asylum seekers to Rwanda in East Africa, on a one-way ticket

At Best Western’s flagship establishment, The Midland in Derby, from where visitors can take trips to the Chatsworth estate or visit the city’s magnificent cathedral, it is the same sorry tale.

Two migrants were sitting in the garden smoking when we visited what is dubbed ‘the world’s oldest railway hotel’ this week. We asked them what they thought of it, but they said they didn’t speak English.

Derby Council has said the hotel is ill-fitted for migrants. And internet comments on the closure to visitors include pleas that other causes should have been given priority if the hotel must be shut.

The writer of one disgruntled post said: ‘I would like to see our homeless, especially our homeless veterans, treated in the same manner.’

A guest who had his booking cancelled by the hotel a week before his stay protested: ‘No reason was given. I was offered a room in another hotel miles away which was completely unsuitable. Presumably the Midland is full of asylum-seekers living it up at the taxpayer’s expense. The Government’s pecuniary inducement trumps any obligation to me or the hundreds of people who will be affected.’

Another customer said the hotel had failed to let them know it had closed to guests, and they had therefore wasted time and money getting there.

‘I was unable to contact the hotel by phone. A rare break away was ruined. Nowhere else available in Derby.’

The imposing seafront Strand Hotel on the Grand Parade at Eastbourne was also discovered to be housing migrants.

The perfect destination for families, the hotel with £130-a-night rooms is near ‘beachfront fun, historic landmarks and evening entertainment’ as well as being less than ten minutes’ walk from the pier and town centre.

It provides a ‘home-away-from-home feel’ for those who stay, it adds on its website.

Yet this weekend more than 100 migrants were the only guests entering and leaving the three-star hotel. When The Mail tried to book a room, we were told it was closed to paying visitors.

Uniformed security guards at the entrance turn prospective guests away, saying the hotel is block booked by a ‘private organisation’, believed to be the Home Office. No smoking signs around the building are written in seven different languages, including Arabic. All the guests there this week were in their late teens and 20s, many appearing to be Iraqi or of North African heritage.

In the north of England, hotels are also turning some guests away in favour of migrants. The Suites Hotel and Spa near Prescot, Merseyside, appears to have been split into two sections, one for migrants and one for paying guests and spa-users.

A security guard sits at the entrance of the migrants’ section near a forecourt where on Friday morning two men, wearing hoodies, shorts and flip-flops drank coffee before setting off for a walk.

Rooms start at £90, but few were available this weekend at the hotel which says on its website that it offers the travellers the comfort of their own ‘suite’. Eighty feature a large executive bedroom, spacious lounge with en-suite bathroom, air-conditioning, interactive TV and satellite channels.

Yet some of the migrants seem unhappy about where they have been sent. An asylum-seeker complained on one website that the Home Office hotel where they lived was not up to scratch. The writer alleged that British visitors would get better treatment.

It is the kind of remark that will make a number of Britons seethe after they tried – and failed – to book a hotel this Easter.

Emma Thompson says she was ‘utterly blind’ to her ex husband having an affair...