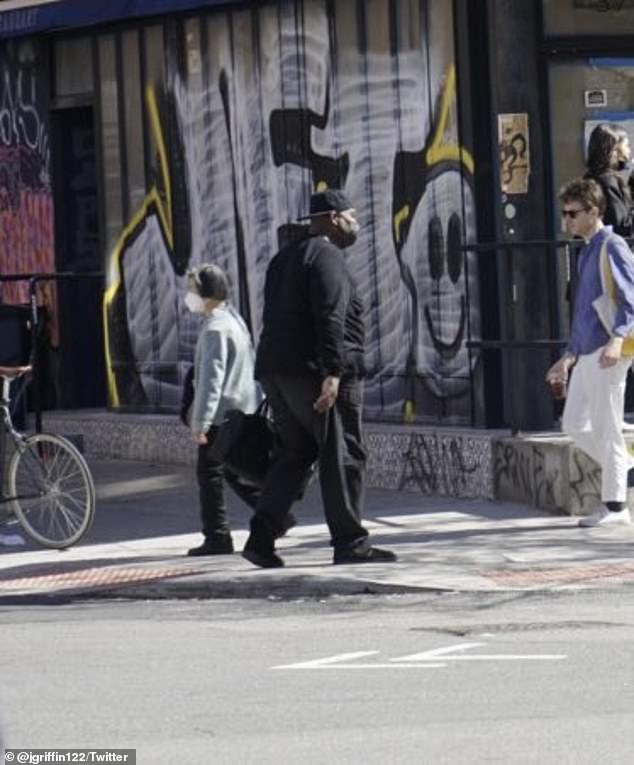 Suspected Brooklyn subway shooter Frank James brazenly traipsed around Manhattan as the full might of the New York Police Department scoured the city looking for him, photos and witness testimony has revealed.

James, 62, spent the night after allegedly shooting ten people on a packed northbound N train at a Manhattan hostel, before waking up to take a tour of some of the borough’s most trendy eateries, including the iconic Katz’s deli, then drinking a beer after he called the cops to turn himself.

James, who is currently in police custody, is accused of popping a smoke canister on the crowded train as it approached 36th Street station in Sunset Park, Brooklyn at 8:26 am Tuesday morning, before opening fire on those inside.

Police and witness accounts have pieced together how he spent part of the nearly 30 hours between the attack and his arrest.

In the 30 hours between the attack and his arrest, suspect Frank James (pictured Wednesday waltzing down Canal Street) was seen strolling around Manhattan, seemingly without a care in the world, as thousands of cops scoured the city in a frantic effort to track him down 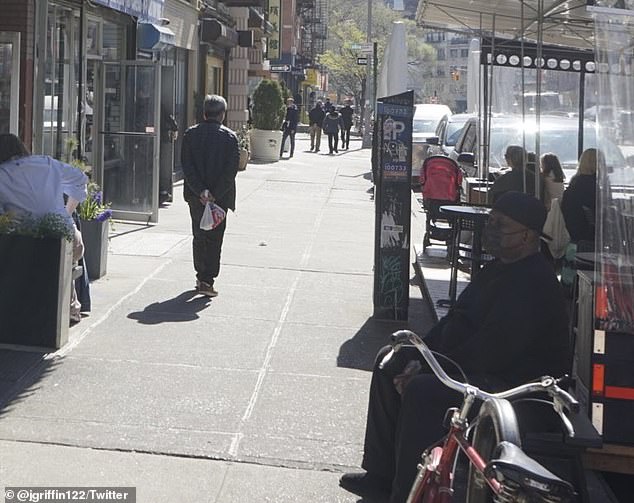 at roughly 10:30 am, the suspect was spotted – and photographed – dining outdoors at trendy Chinatown eatery Dimes on Canal St., by a passerby who shared the two photos of the suspect to social media

Immediately after fleeing the scene at the 36th Street subway station, James – who donned a orange construction worker-style vest, hardhat, and gasmask during the attack – ditched his gear, and reportedly boarded a southbound R train for one stop, exiting at 25th Street.

Video footage from a bodega by the station shows James, in all black, emerging from the subway system at 8:30 am, before walking away.

‘He was the first one out,’ Sulaimen Yehia, 33, a staffer at the nearby Lotto Deli & Grill, told The Daily News. ‘He already changed his whole gear. They were looking for gray and construction and he came out all black. Nobody thought he changed his clothes that quick.’

About five minutes later, at roughly 8:35 am James was seen on video, in black, walking past Greenwood Cemetery blocks away to board a bus, which he took to a subway stop at Seventh Ave. and Ninth St. in the neighboring nabe of Park Slope.

James then bought a mask at the 9th Street Quick Stop, less than two miles from the scene of that attack that occurred just a half hour before. Worker Ismail Hossein, 24, told the News Thursday that a fellow staffer at the store had spoken to the FBI and NYPD about the sighting. 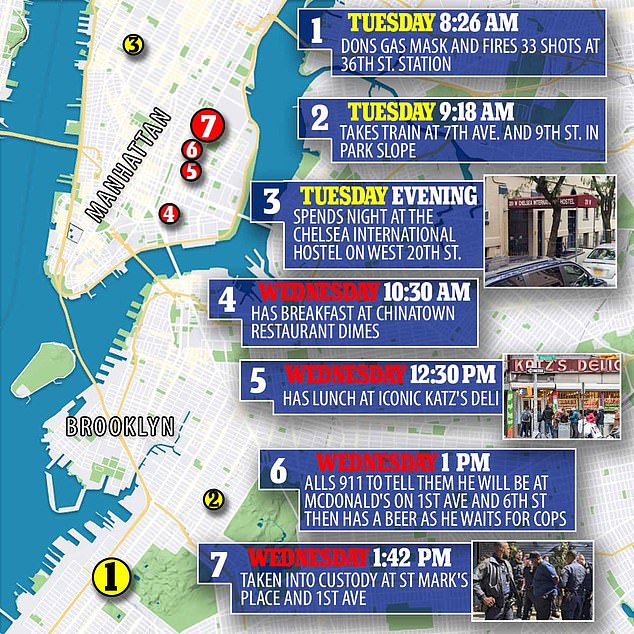 James, 62, spent the night after allegedly shooting ten people on a packed northbound N train at a Manhattan hostel, before waking up to take a tour of some of the borough’s most trendy eateries, including the iconic Katz’s deli, before calling the cops on himself

James, a career criminal who lives in Philadelphia, managed to lay low for the rest of the day, somehow evading thousands of cops mobilized after the attack, which saw the suspect fire off 33 shots at the trapped straphangers, injuring 10.

That night, however, law enforcement sources revealed, James crossed the bridge into Manhattan, where he stayed at the Chelsea International Hostel on West 20th St overnight.

The next morning, at roughly 10:30 am, the suspect was spotted – and photographed – dining outdoors at trendy Chinatown eatery Dimes on Canal St., by  Twitter user Jack Griffin, who shared two photos of the suspect to social media, with the caption, ‘possible frank james sighting.’

One of the photos posted by Griffin, at 10:29 am, showed a heavyset man matching James’ description walking down Canal Street still dressed in black, while another showed him sitting at Dimes’ outdoor dining area ‘just staring into space,’ Griffin told The News.

The post from Griffin prompted a response from the NYPD’s Crime Stoppers unit, who asked the Twitter to provide more details on the then-suspected sighting. 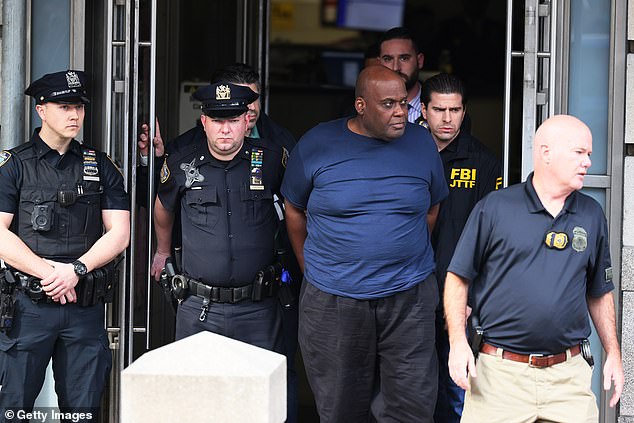 Following multiple sightings across the borough, cops were able to finally put James in cuffs after a New Jersey security camera company worker recognized the suspect and flagged down a passing police vehicle

Police have since confirmed that the man pictured in the photos was indeed Griffin.

A few hours later, at around half past noon, James ate again, grabbing lunch at Lower East Side stalwart Katz’s Deli, just a few blocks away, a separate source told The News.

James – who became a person of interest in the case after cops identified him and came across a slew of YouTube videos he had posted that aired grievances on homelessness, the conditions of the subways, and new mayor Eric Adams – then moved on to a nearby McDonald’s, at East 6th St. and First Ave, where he inexplicably called Crime Stoppers on himself around 1pm – roughly 29 hours after the shooting.

During the call, James told the unit he was at the McDonald’s, and said he was ‘seeing his face all over the news,’ the law-enforcement source told the News.

An operator asked James for a number they could call him back on – to which he replied he didn’t know it, because the phone was new. He then said that his battery was about to die, and told the operator he would be charging the phone at the fast food eaters or somewhere close by, the source said.

James was then spotted again, according to 18-year-old Salim Brisbane, who said a friend saw the suspect leave the McDonald’s to get a beer at a nearby bar.

‘We heard he came to McDonald’s and then went and got a beer afterwards. Our friend saw him,’ Brisbane told the paper. ‘What the actual f–k?’

Cops, now on high alert, quickly mobilized to the area, but were still, somehow, unable to track James down. 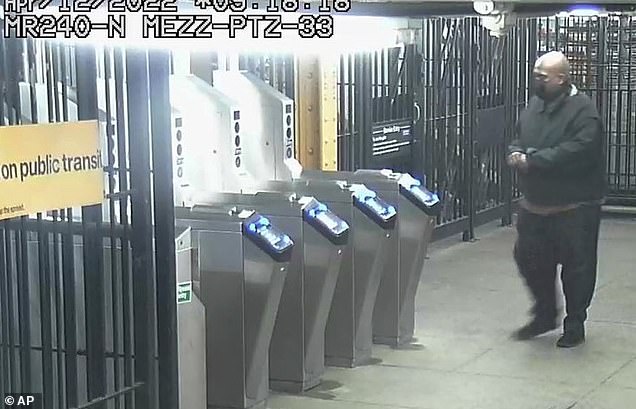 James is shown 15 minutes after the attack, leaving the subway after committing the attack

At 1:42 pm, however, cops were able to finally put James in bracelets while the suspect walked casually along St. Marks place, just a couple of blocks from the McDonald’s, only after a New Jersey security camera company worker recognized the suspect and flagged down a passing police vehicle.

James was then walked from the local police precinct, where he was pictured by a flood of photographers and press.

Following the arrest, Mayor Adams – who promised to crack down on rampant crime in the city’s subway system after being sworn into office in January – touted the efforts of the city’s police department while James was on the run, while omitting the fact that the suspect had turned himself in.

‘He fired 33 shots,’ the mayor wrote. ‘But less than 30 hours later, thanks to the NYPD, federal and state partners, first responders and every day New Yorkers, we got him. 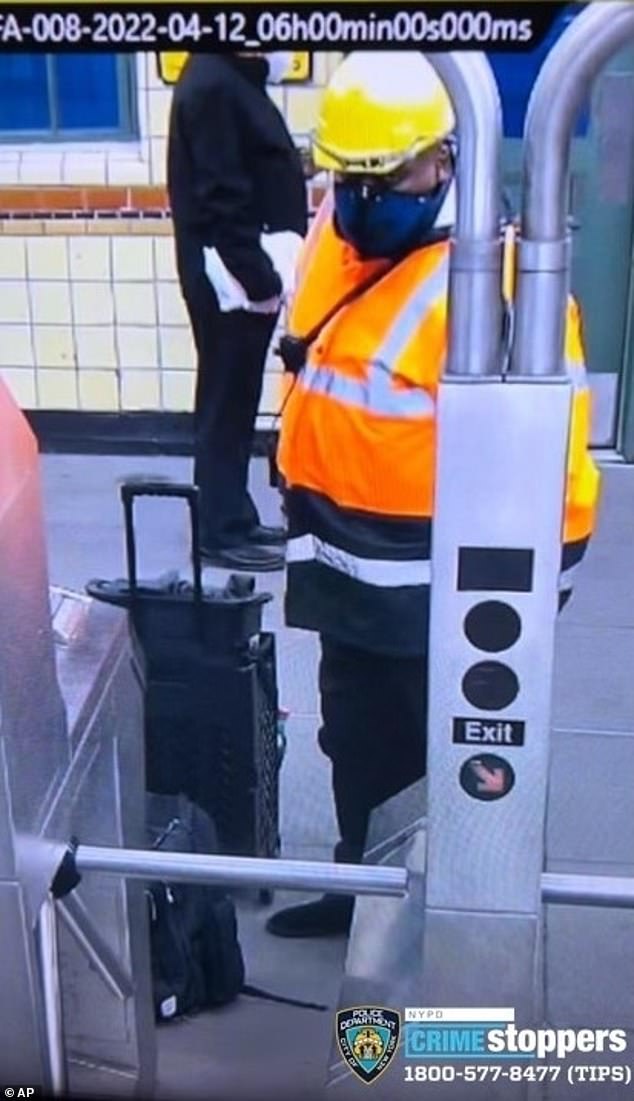 Frank James is shown entering the subway in Brooklyn on Tuesday morning before the attack. He was held without bond

‘We brought the Sunset Park subway shooter to justice. Keeping our city safe is at the heart of our administration. Always.’

Some 24 hours after his arrest, James was arraigned in federal court in the Eastern District of New York in Brooklyn Thursday afternoon, where he was represented by public defenders and said nothing as the judge addressed him, other than answering ‘yes’.

When asked if he’d seen the complaint against him, James responded: ‘Yes I have.’

Public defenders asked for a psychiatric evaluation to be carried out in custody. They also asked for magnesium tablets for James, who suffers ‘leg cramps’.

He said he understood the charges against him.  James waived his right to a preliminary hearing. He was held without bond.

Prosecutor Sara Winik told the court: ‘The defendant terrifyingly opened fire on passengers on a crowded subway train, interrupting their commute in a way that has not been seen for 20 years.

‘This was premeditated, carefully planned and it caused terror among our entire city.’

In court documents filed on Thursday, prosecutors detailed how more ammunition was found in James’ rented Philadelphia apartment, including an extended round magazine that was fit for a semi-automatic rifle. No such firearm has been found yet in connection with the suspect.

The morning of the attack, James was filmed by traffic cameras entering Brooklyn via the Verrazano Narrows Bridge in a rented U-Haul van at 4:11 a.m. 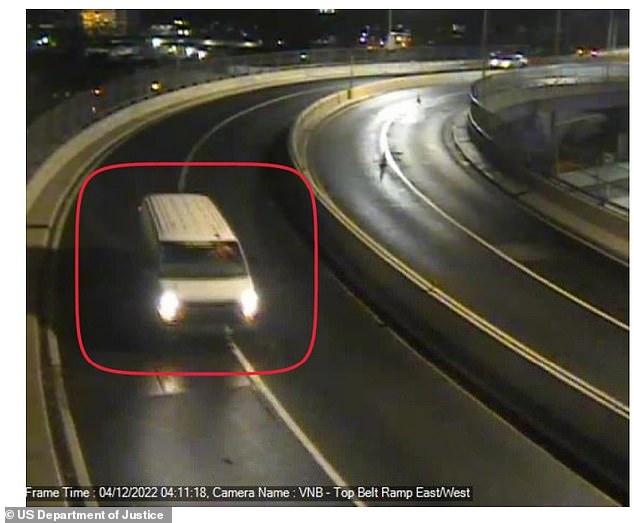 TUESDAY, 4 AM: James is shown driving into New York from Philadelphia at 4.11am on Tuesday, the morning of the attack, in the U-Haul. A key to the U-Haul was found along with the gun registered to his name inside the subway station after the attack. Police found a tank of propane gas in the vehicle on Tuesday afternoon

Further video showed the suspect ditching the U-Haul at Kings Highway, near where the shooting took place, at 6:12 am, clad in the orange vest and yellow hardhat he wore during the attack.

Subway surveillance footage then shows James boarding a Manhattan-bound N train, where he traveled eight stops before engaging in the attack.

His 9mm handgun was found at the 36th Street subway station on Tuesday, after the attack, along with spent shell casings, fireworks, and a key to his U-Haul.

Police have also searched a storage unit in Philadelphia, where he was keeping more ammunition, a torch and a gun silencer.

James’ motive in the attack remains unknown. He is currently being held without bail pending a police investigation.

Yawning evolved as a social cue to warn others we are less alert, study...

The single Most Necessary Factor You should Know about Ремонт Квартир