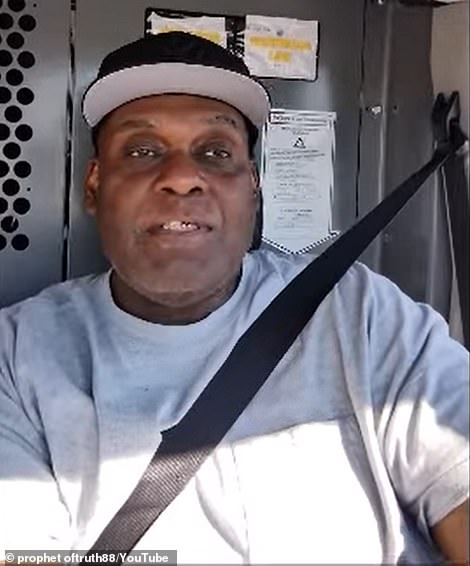 Subway gunman Frank James has been arrested walking around the East Village in lower Manhattan, a day after shooting ten people on a packed Brooklyn train.

James was taken into custody on Wednesday on 1st Avenue between 7th and 8th Streets after a by-stander recognized him and called police.

More details are expected at a 2pm press conference.

His arrest on Wednesday brings an end to an embarrassing, day-long manhunt by the FBI and NYPD.

Now that he is in custody, attention will turn to why it took the police so long to find him in a city that is covered in surveillance cameras.

He is understood to have rented a U-Haul in Philadelphia sometime earlier this week and driven it to Brooklyn, dumping it on the Kings Highway, five miles from the 36th Street station.

He then was filmed getting on the subway at Kings Highway, shortly after 6am. It’s unclear what he did for the next two-and-a-half hours before unleashing a smoke bomb and firing his handgun on the train. 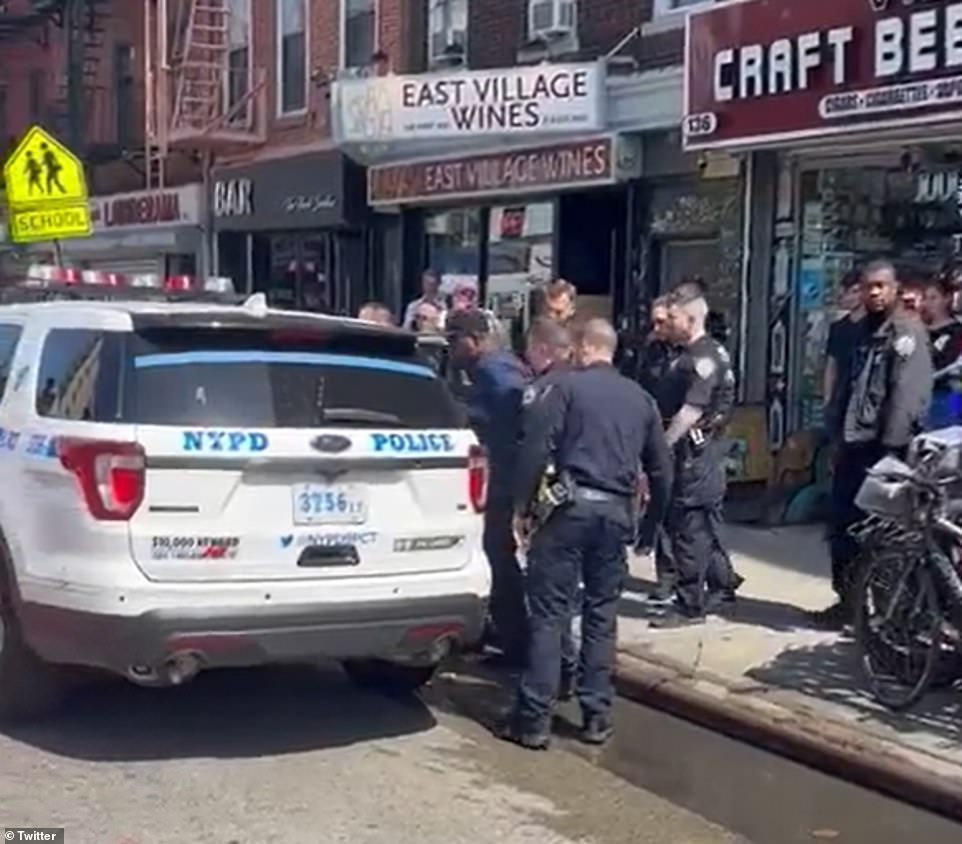 A suspect believed to be Frank James is shown being taken into custody on First Avenue between 7th and 8th Streets in Manhattan’s East Village on Wednesday, nearly 30 hours after shooting ten people on the subway 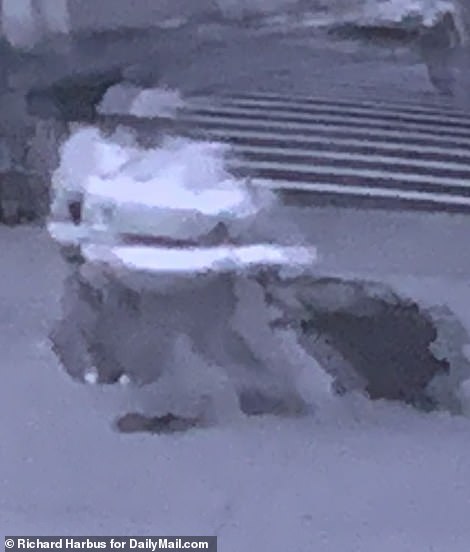 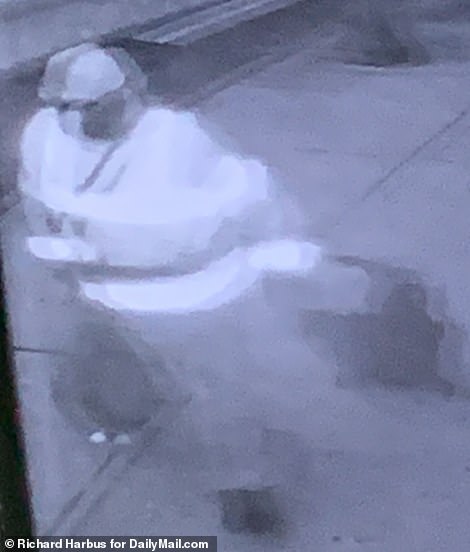 The footage was obtained on Wednesday morning as James, 62, remained at-large. It shows him walking slowly down a street in Brooklyn, wheeling a bag behind him and carrying a backpack in the other hand. He is wearing an orange construction vest

In a fumbling appearance on FOX on Wednesday morning, Mayor Eric Adams couldn’t explain why the cameras inside the 36th Street subway station – where the attack took place – were not working at the time of the attack.

‘Our goal is to find out if other stations are having problems with cameras,’ he said, deferring to the MTA and saying he was in ‘communications’ with them, then coughing and sipping water from a wine glass in a reminder that he just tested positive for COVID.

The attack yesterday is the pinnacle of a worsening crime problem that has terrified New Yorkers for the last two years. Violent crime on the subway has increased by more than 60 percent since this time last year, despite Mayor Adams’ promise to put more cops on trains and in stations.

Still, no one knows how James was able to escape after shooting ten people on the northbound N train.

For weeks before the attack, he had been posting unhinged and worrying videos on YouTube about race, and how he would never return to Wisconsin – where he lived – alive. 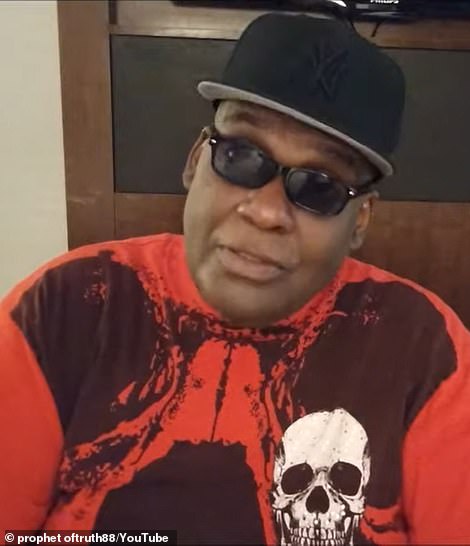 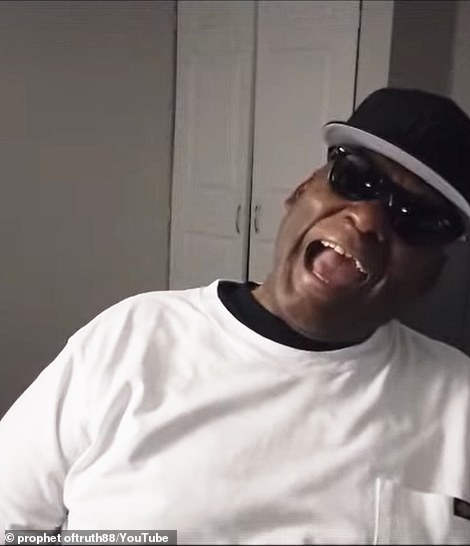 James posted dozens of ranting videos on YouTube where he spoke about race wars, prison, violence and moving from Wisconsin

It has now emerged that he was known to the FBI and was questioned in 2019 in New Mexico though it is not yet  clear why. He was cleared but was entered into the state’s ‘Guardian Lead’ system.

The questions authorities must answer as NYC subway shooting suspect, 62, remains on the run

How did he get away?

Over a day later the attacker still remains at large despite hundreds more cops being deployed in the manhunt.

The Mayor said a ‘malfunction’ was the reason for the failing to capture any footage of the suspect across three subways.

The MTA said last fall it had installed security cameras in all 472 subway stations citywide, saying they would put criminals on an ‘express track to justice’.

Why did the FBI clear the suspect and take no action over the hateful videos and psych unit admissions he shared?

The FBI faces major questions after it emerged the suspect in the Brooklyn shooting was on their terrorist radar. The Bureau is said to have previously known the man but released him following multiple interviews.

A source revealed the bombshell update to Newsweek last night, saying the suspect was entered into the Guardian Lead terrorism monitoring system in New Mexico

YouTube commonly deletes videos it deems inappropriate, with youngsters often seeing their posts removed if they feature copyrighted music in the background.

But the tech giant, which is owned by Google, again appears to have failed to react to the far more serious case of the Brooklyn suspected shooter.

James had posted a raft of unhinged videos on the social media website, ranting about race and how he would ‘never be back again alive’ just three weeks ago.

He relentlessly uploaded hate-speech-filled clips online about how oppressed black people were and how black and white people should have ‘no contact’.

Why were subway doors locked so passengers couldn’t escape?

One video captured them slamming against the locked subway doors as they were engulfed in smoke from the shooter’s smoke grenades.

Others recorded themselves yanking on the handgrip several times – proving it was fastened shut – while the shooter loomed nearby.

The MTA has previously been warned about the dangers posed by keeping these locked, with some, but not all, kept shut.

The Guardian Program is the bureau’s terrorist threat and suspicious incident tracking system.

Despite being on that list, James was unimpeded as he relentlessly uploaded hate-speech-filled clips on YouTube about how oppressed black people were and how black and white people should have ‘no contact’, for weeks before Tuesday’s attack.

In the March 20th video, titled ‘STOP ONE COMPLETE’, he gave an ominous warning about his plans. Speaking from the driver’s seat of a rented van, he said: ‘As I leave the state of Wisconsin, about to be back in the state of Illinois, all I can say is: Good riddance. I will never be back again alive to that m*********r.’

5B Solar, funded by climate millionaire Simon Holmes à Court, lays off 25 per...

Nothing To See Here. Just a Bunch Of Us Agreeing a 3 Fundamental Ремонт...