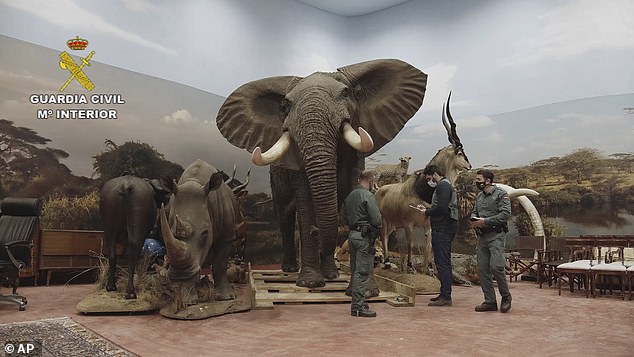 Spain‘s civil guard is investigating a private taxidermy collection with more than 1,000 stuffed animals – including 405 from protected species and at least one extinct specimen – was discovered at a warehouse in Valencia.

The finding of elephant tusks, cheetah, white antelopes and more is the largest of protected stuffed specimens in Spain and one of the most sizeable in Europe, the authorities said in a statement today.

It added that the collection is worth a whopping 29 million euros (£24 million) and that the person being investigated may face charges for smuggling as well as those related to the protection of flora and fauna in the municipality.

A warehouse owner in Spain’s eastern Valencia is under investigation after a private collection with more than 1,000 stuffed animals 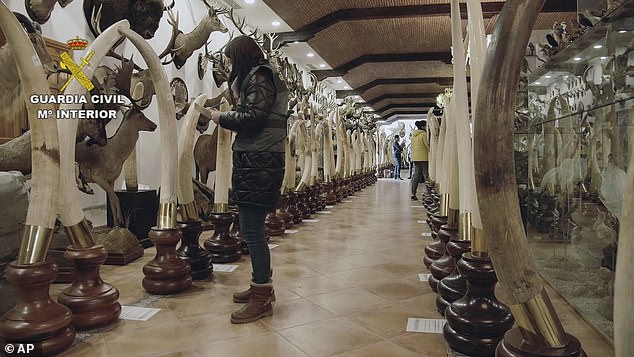 The finding of elephant tusks, cheetah, white antelopes and more is the largest of protected stuffed specimens in Spain

Investigating agents found the stuffed animals in two warehouses extending over 50,000 square metres on the outskirts of Bétera, a small town north of the eastern coastal city of Valencia.

Of the 1,090 stuffed animals found, 405 belonged to specimens protected by the CITES (Convention on International Trade in Endangered Species of Wild Fauna and Flora) convention on wildlife protection.

They included the scimitar oryx, also known as the Sahara oryx, a stunning white antelope which was once widespread across North Africa.

It was declared extinct in the wild in 2000 by the International Union for the Conservation of Nature.

The collection also featured at least two more species which are nearly extinct, including the addax – also known as the ‘screwhorn antelope’ from the Sahara desert – and the Bengal tiger. 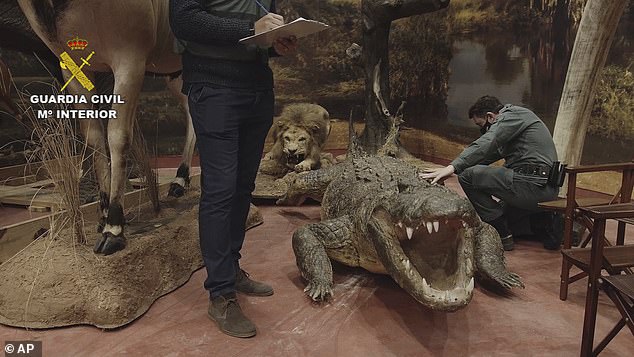 The operation began last November, when agents first became aware of a possible private collection in the area.

The Civil Guard said it would investigate whether any documents exist justifying the ownership of the collection.

Emily Ratajkowski flashes her toned tummy as she teases Julia Fox as her next...

Mila Kunis bundles up in an eye-catching red puffer jacket and comfy sweats as...