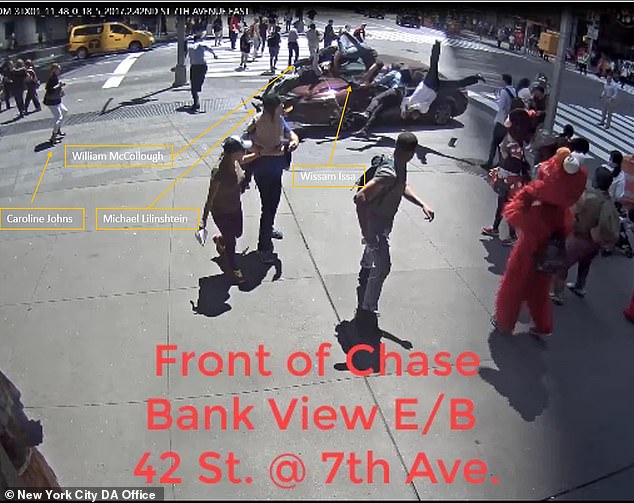 Shocking new footage of a car barreling into pedestrians in Times Square has emerged as the murder trial of the Bronx man behind the wheel continues.

The car then drives over the sidewalk, ramming down everyone in its way across three city blocks at incredible speeds.

Bodies are seen strewn above and below the car as it continues on its path of destruction.

It crashes against a curb and ends up with its two side wheels in the air. The driver, Richard Rojas, then gets out of the car, jumps up and down and flails his arms.

A traffic cop tackles him, and other pedestrians help hold him down until police arrive.

At his trial on Monday, Ava Elsman remembered ‘just trying to lay there [and] not die’ as she bled out.

The family had arrived in the city the same morning from Portage, Michigan. Her sister Alyssa died from her injuries.

‘I just looked up and I saw the car turn and that was the last thing I saw,’ Ava, now 18, told jurors. 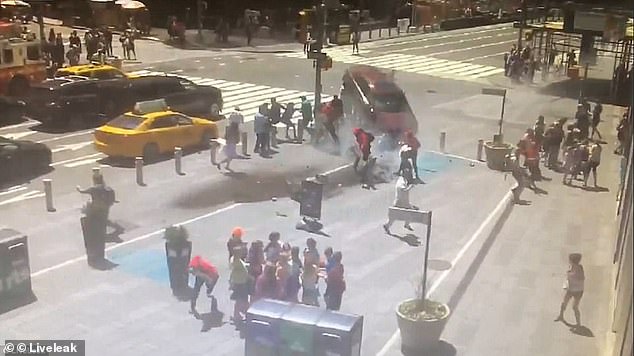 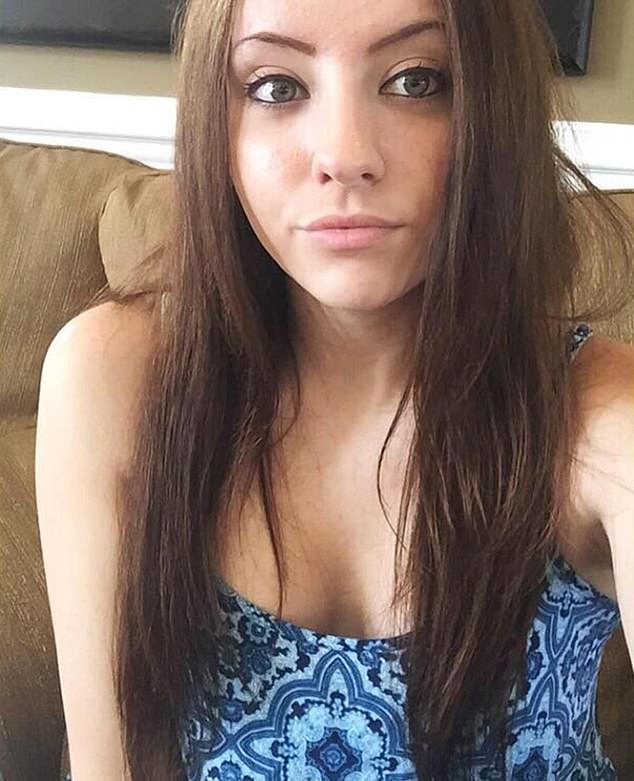 Her sister Alyssa Elsman (pictured) is the only person who died in the attack. The 18-year-old from Portage, Michigan had just arrived in New York with her family that morning

‘I was in and out of consciousness,’ Ava said, according to the New York Post. ‘Someone told me to put my leg down or I would bleed out.’

Ava suffered broken ribs, a collapsed lung, a fractured pelvis and compound fractures in her leg. She remembered ‘just trying to lay there [and] not die.’

Rojas, 31, admitted to smoking marijuana laced with PCP before the incident, which left 22 other people injured. The Navy veteran faces a life sentence if convicted and has has previously served time in military prison.

The two-minute, 34-second video was released as evidence in Rojas’ murder trial.

It includes surveillance footage from multiple cameras spanning the three blocks in Times Square where the attack took place.

Terrified pedestrians are seen running away from the speeding car as it wantonly mows down innocent people.

Injured passersby double over in pain as the car runs them over and keeps going.

The car eventually comes to a halt after it crashes against a pole on the curb.

Rojas gets out and is apprehended by a traffic cop and passersby until officers arrive.

After the attack, Ava Elsman spent several months in rehab and couldn’t walk again until September 2017, four months after the horrific scene in Times Square.

‘I just looked up and I saw the car turn and that was the last thing I saw,’ Ava said.

‘Everything went black but I heard the engine running. I could hear people screaming and running but it was all black.’

She said she woke up with people around her but ‘could not physically feel anything because all of the blood I was losing.’

A stranger told her to put her leg down or she would bleed out.

At the hospital, she asked her mom about her sister.

‘[Her] face dropped,’ Ava recalled. ‘When there were no words, I knew exactly what happened.’

She now works as a restaurant hostess in Michigan. 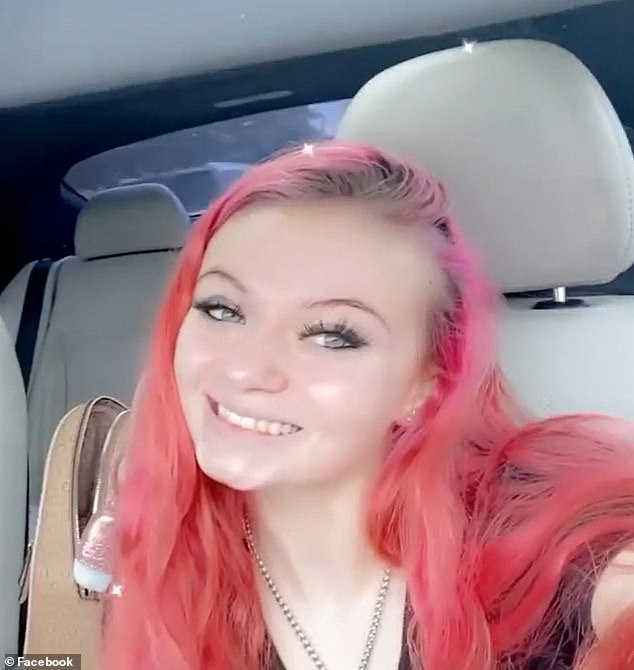 Ava Elsman was 13 when she was run over by the crazed man. She says a stranger warned her to keep her leg down so she wouldn’t bleed out 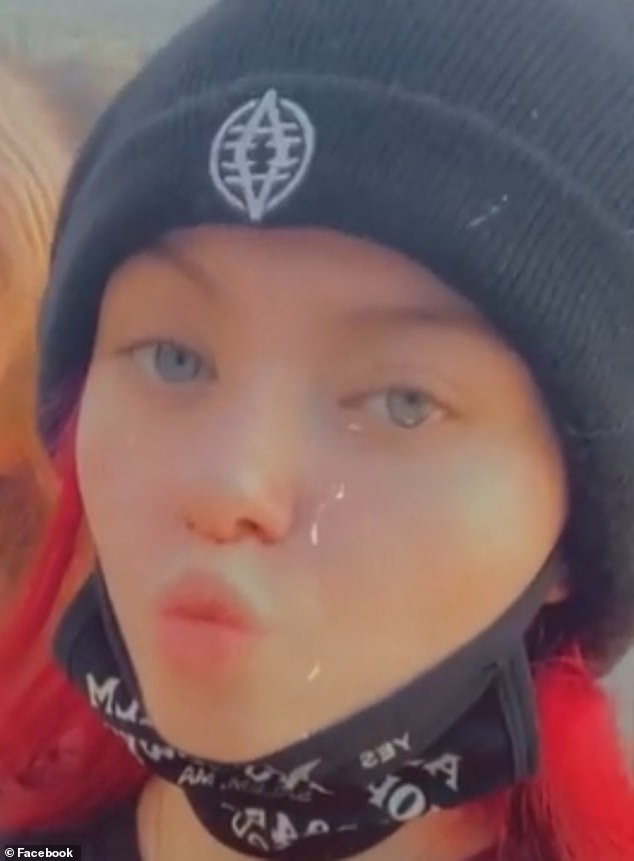 Ava now works as a restaurant hostess in Michigan. ‘It’s hard because there are a lot of things I’ve done in my life I want [Alyssa] to physically see,’ she said, referring to her sister who died

‘It’s hard because there are a lot of things I’ve done in my life I want [Alyssa] to physically see,’ Ava said. ‘I know in spirit she can see me [but] I physically want to give her a hug.’

‘A whole piece that was ripped out of my life. I get jealous watching people with their families because I don’t have that anymore.’

Alyssa Elsman is the only person who died in the attack. She had graduated high school the year before.

Her principal described her as ‘bright, thoughtful, quiet, terrific sense of humor – so when I first heard the story, I glance at my phone real fast, but could not even imagine that it affected one of us,’ according to CBS News. 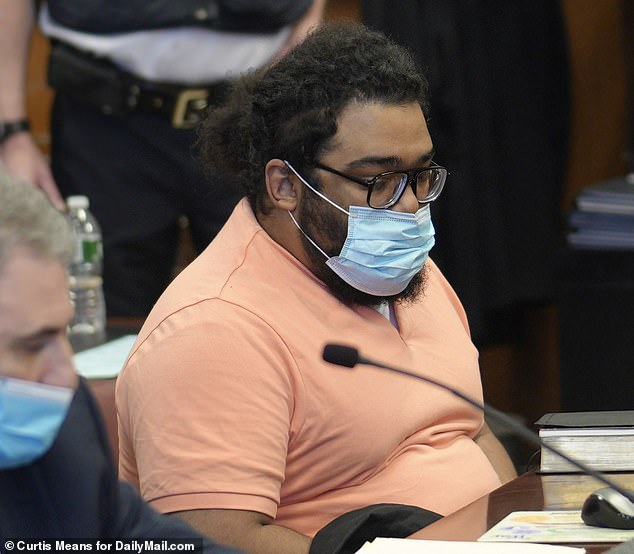 Richard Rojas, 31, was well aware of the carnage he was causing by plowing through helpless tourists in 2017 visiting Times Square, the prosecutor said at trial on Monday 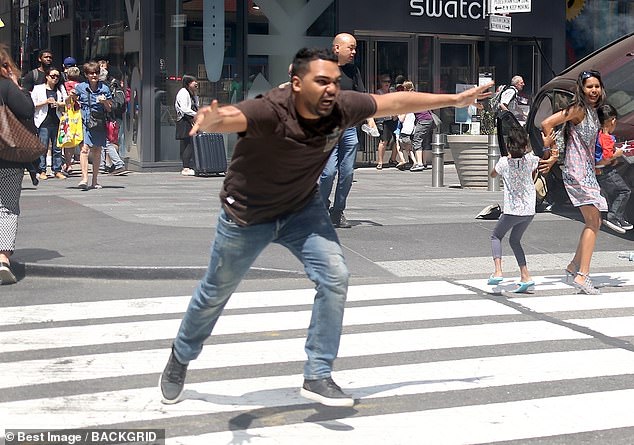 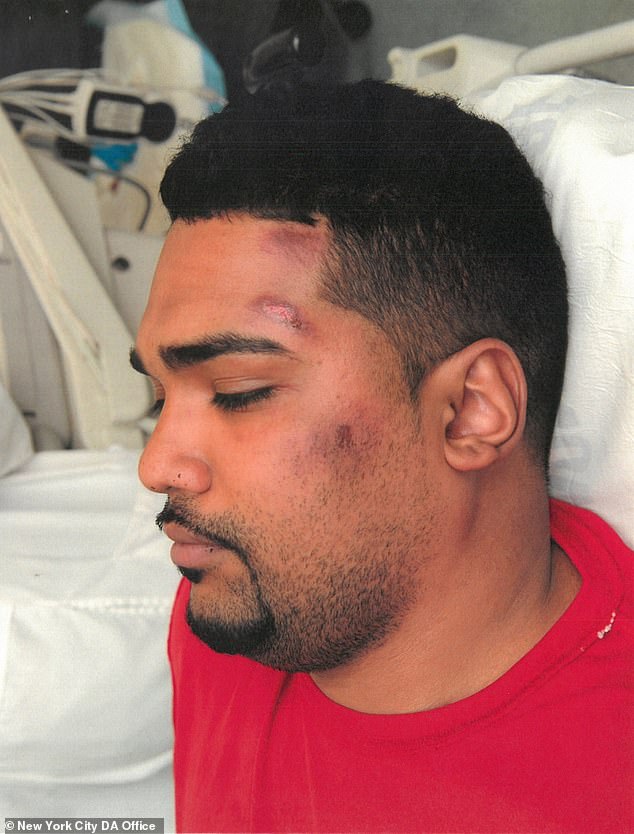 Richard Rojas screamed ‘I want to kill them all!’ after he rammed into the crowd, the court heard.

The jury also heard that the 31-year-old military veteran was well aware of what he was doing during the 2017 carnage, despite his defense’s claims that he wasn’t of sound mind.

Rojas crashed into helpless tourists who were visiting ‘the crossroads of the world.’

It was ‘impossible for him not to know exactly what was happening,’ prosecutor Alfred Peterson said in his opening statement. ‘But he didn’t stop.’

After Rojas crashed his car, his first words to a traffic agent were, ‘I wanted to kill them all,’ the prosecutor said. He was allegedly high on PCP at the time. 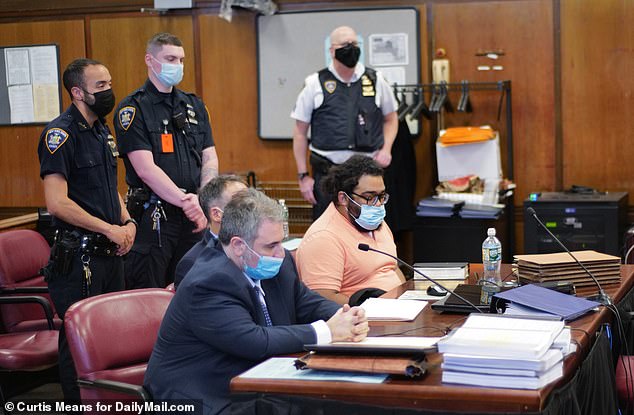 Defense attorney Enrico DeMarco said in his opening statement that Rojas has a history of mental illness that made him unable to understand the consequences of his actions that day.

‘This a case about a 26-year-old who lost his mind,’ DeMarco said.

Rojas’ trial, in state court in Manhattan, is expected to take several months and include testimony from victims who suffered severe injuries from what prosecutors labeled ‘a horrific, depraved act.’

Alyssa Elsman, an 18-year-old on a family trip, was killed. Her 13-year-old sister, Ava, was among the injured.

Jessica Williams, of Dunellen, New Jersey, was so badly hurt that her mother had to accept the diploma at her high school graduation while she remained in the hospital. 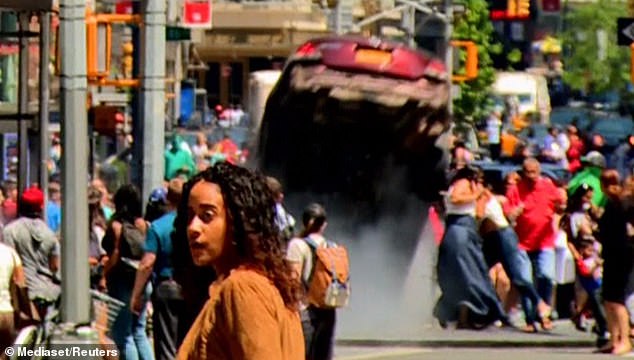 Shocking photos show the moment the SUV plowed into pedestrians on the sidewalk in Times Square in 2017, killing an 18-year-old and injuring 22 others 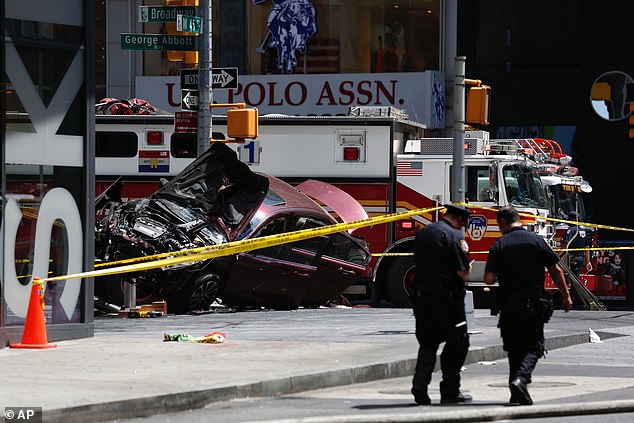 Prosecutors say Rojas drove his car from the Bronx, where he lived with his mother, through Times Square on May 18, 2017, then made a U-turn.

He then steered his car onto a sidewalk, and roared back up the sidewalk for three blocks before he crashed his car into protective barriers.

Photographers snapped pictures of a wild-eyed Rojas after he climbed from the wrecked car and ran through the street waving his arms.

At the time, the US Navy veteran told police after his arrest that he had been smoking marijuana laced with the hallucinogenic drug PCP before the incident, authorities said. 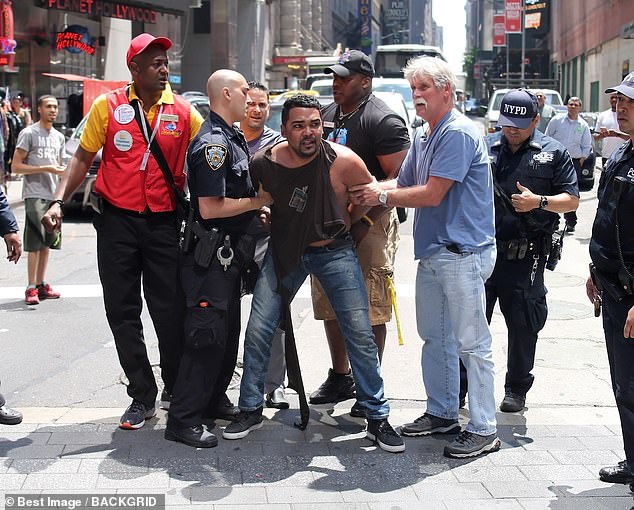 At the time, the U.S. Navy veteran told police after his arrest that he had been smoking marijuana laced with the hallucinogenic drug PCP before the incident 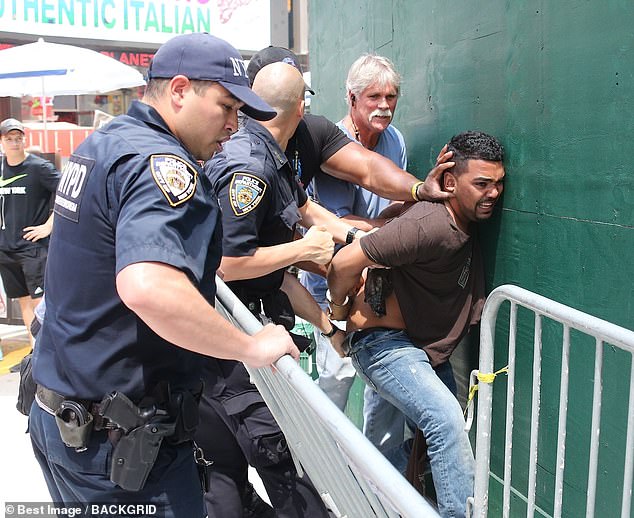 Rojas, of the Bronx, was taken to a psychiatric hospital for evaluation after his arrest

Rojas pleaded not guilty at an arraignment in 2017 and has since been jailed at New York City’s notorious Rikers Island jail complex.

His lawyer said at the time that it was a ‘terrible thing that happened’ in Times Square.

Rojas, now 31, has several prior criminal cases that paint a picture of a troubled man.

Days before the Times Square incident he pleaded guilty to a harassment charge in the Bronx for pulling a knife on a notary in his home and accusing the person of trying to steal his identity. 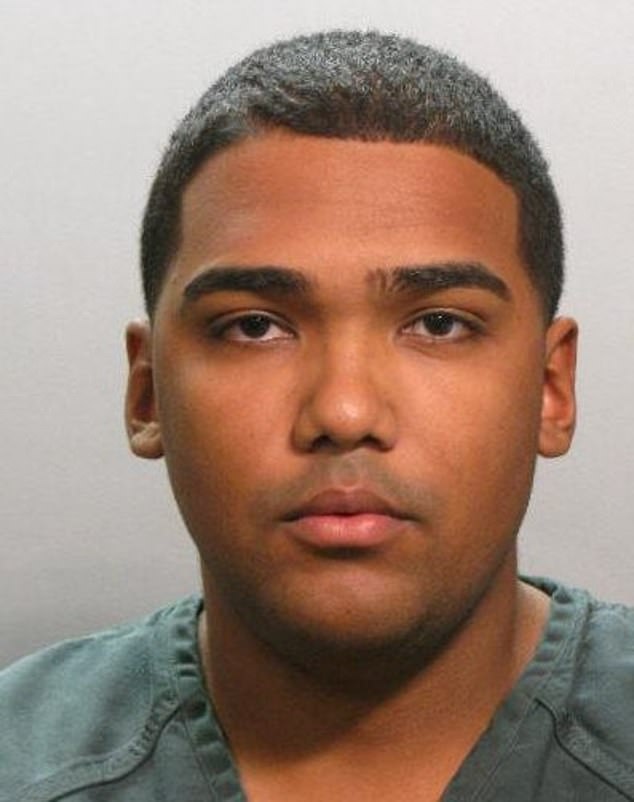 Rojas enlisted in the Navy in 2011 and served for part of 2012 aboard the USS Carney, a destroyer. Rojas spent his final months in the Navy at the Naval Air Station in Jacksonville, Florida.

In 2012, he was arrested and accused of beating a cab driver whom he said had disrespected him by trying to charge too much, according to the arrest report.

The arresting officer said Rojas screamed, ‘My life is over!’ as he was being detained. After his arrest, Rojas told the officer he was going to kill all police and military police he might see after his release from jail, the Jacksonville sheriff´s office report stated.

Alan Ceballos, an attorney who represented Rojas in that case, said the state charges were dropped after the military stepped in to take jurisdiction over the criminal case.

Navy records show that in 2013 Rojas spent two months at a naval prison in Charleston, South Carolina. He was discharged in 2014 as the result of a special court martial, a Navy official said.

Director Paul Haggis gave court litany of excuses over how his $25M worth dried...

Paul Pelosi answered door to cops but did NOT say he was in distress,...