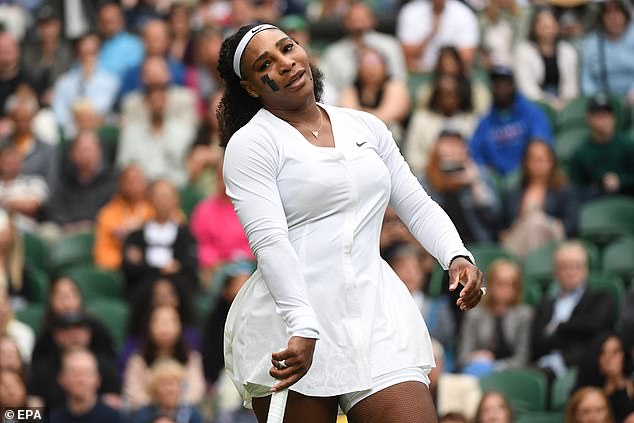 Serena Williams walked off the Centre Court on Tuesday night, possibly for the last time, after failing to hold back the tide of youth.

The American fought to keep her career at Wimbledon alive, but ultimately could not meet the challenge of a poised and courageous opponent in France’s Harmony Tan, who prevailed 7-5 1-6 7-6 after more than three hours.

A deciding super tiebreak saw her recover from 0-4 down to claim it 10-7, with Williams straining every sinew within her ageing frame. 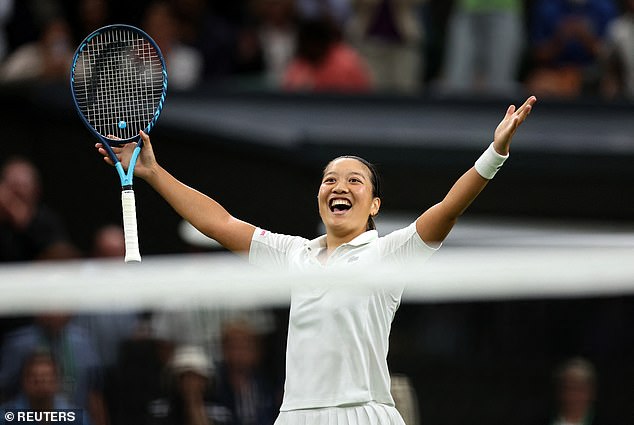 Williams, who made her comeback at SW19 after a year’s absence, was beaten by Harmony Tan

The tournament’s lowest ranked woman at 1204 – a wildcard in name only with her seven previous singles titles – ultimately lost the struggle to hide the fact that she had not played for a full twelve months.

As with most happenings in her career it was never dull or predictable, a clash of styles lighting up the grand old arena with Williams playing the lead role as she has done so many times before.

It was as if the 23-time Grand Slam champion came to this fight armed with a baseball bat, to her opponent’s stiletto. 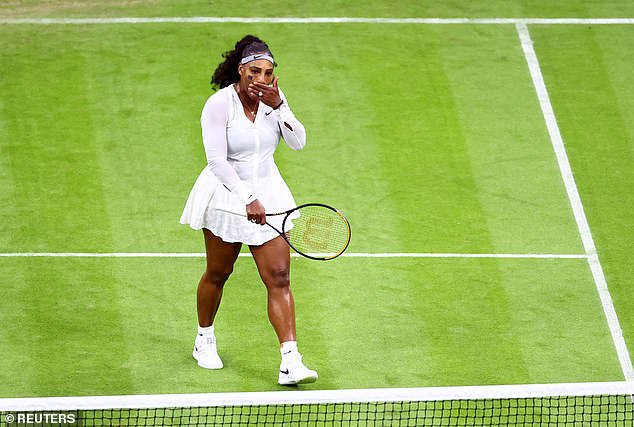 A 23-time Grand Slam champion, Williams was taken to a deciding set and lose on a tiebreak

Even at 40, the American can summon up ferocious power, and when she launched her fightback the blows were often accompanied by determined yelps and groans to amplify them.

In an era when many of the women’s top ten could walk down Wimbledon High Street without any fear of being recognised, Williams retains a star quality all of her own.

As the world number 113, Parisian Tan could certainly stroll down the Champs Elysees unbothered, but she has a delightful game to watch that harks to another era.

It probably helps that she is coached by the canny Nathalie Tauziat, one of Wimbledon’s less-remembered finalists, from 1998. 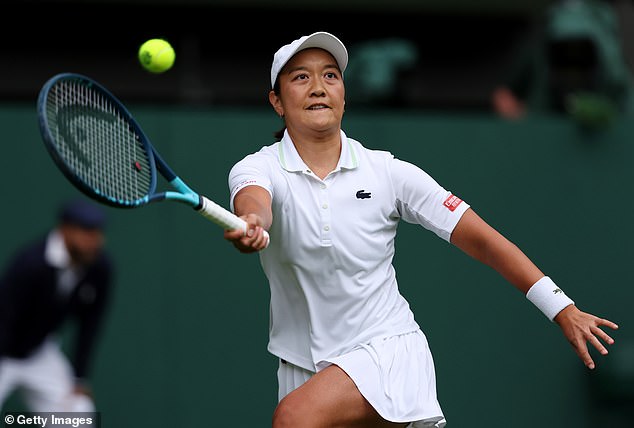 Tan’s game is delightful and harks to another era, and, ever-poised, she carved Williams open 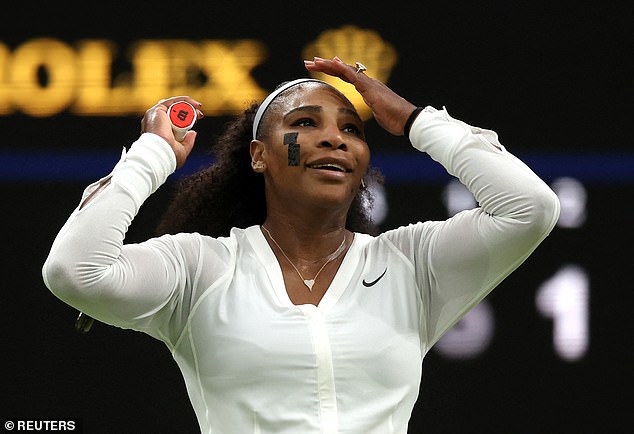 Williams was coy over the extent of her preparation, but she found herself misfiring early on

Williams has been coy about how much preparation she had prior to this and arrived in Eastbourne last week.

One experienced coach who witnessed her first practice on the south coast ventured that her ball striking was so clean that she must have been in proper training for some time.

So perhaps this was less of a calculated risk – playing just two double matches in Sussex before heading to SW19 – than might have been estimated.

The American walked on court almost straight after Rafael Nadal had finished his on-court interview. The idea of having a 20-minute gap between matches lasted less than 48 hours this year – not the first time in history that the rules have been changed for Serena. 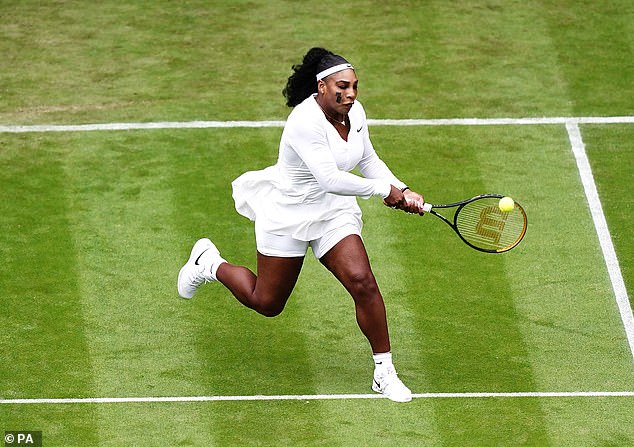 However, the legend was able to fight back, and took the match the distance under the lights

Williams was like misfiring diesel at the start, barely able to get going for the first two games but then slowly shifting through the gears and the lanes to reach full velocity.

Tan’s tactics were clear. To exploit her opponent’s movement with the deft use of angles and slices, which extended to one remarkable return dropshot winner.

Its effect soon wore off and Williams gradually turned a 0-2 deficit into a 4-2 advantage but could not strike the decisive blows when the set looked there for the taking.

The crowd loved it, for advanced age bestows on a player a favouritism that would not have been there in her pomp. 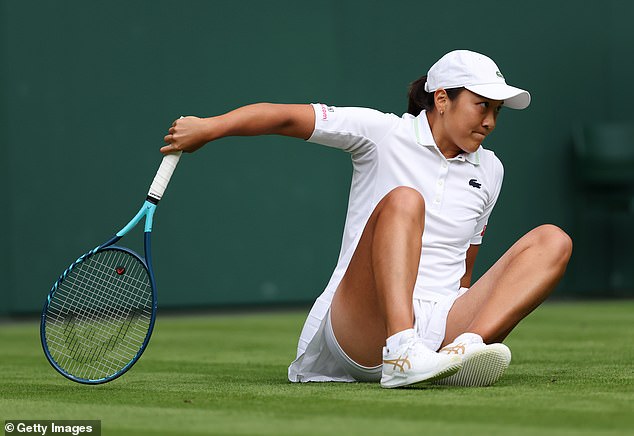 Tan suffered a fall during the thrilling showdown, but continued to test out Williams’ stamina

The French player kept creatively tormenting her and, although the American’s legs were moving better, she could not muster the consistency to stop the match slamming into reverse. This despite managing one 118 mph ace that had the memories flooding back.

Tan clinched the set with a blinding cross court pass which, as it turned out, sent them into a break because the roof needed closing.

It was becoming clear that Williams’s stamina would be tested. The first set took 64 minutes and the second game of the next took just shy of 20 minutes and 30 points before the American finally clinched it on a seventh break opportunity.

Experience helps when it comes to transitioning from daylight to floodlight, and the more emboldened Williams started to steam through the set. 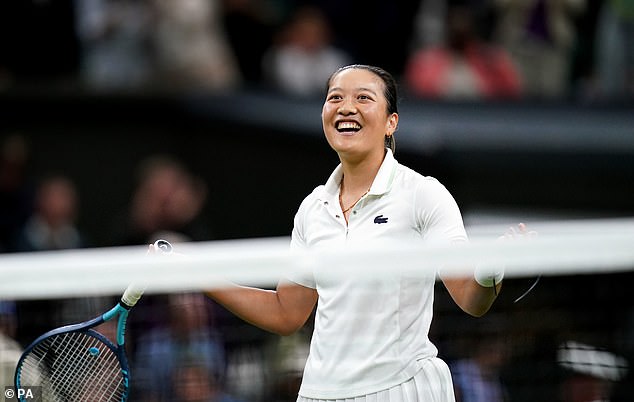 After her victory, the little-known player celebrated with her family watching on Centre Court

The timing was returning and a particular key was her landing three out of four first serves in. Suddenly her power was becoming too much, even for the skilful defence ranged against her.

Tan took a six-minute toilet break before the decider, a chance to collect her thoughts and for Williams to lose some momentum.

Williams had the chance to serve it out at 5-4 in the decider but the ever-poised Tan admirably carved her open to draw mistakes and take it into the new super tiebreak.

‘Get that Lycra out!’: Anneka Rice is back to host Channel 5 reboot of...

Air Force cadet, 19, from Alaska, killed in Humvee accident in Idaho after ‘her...