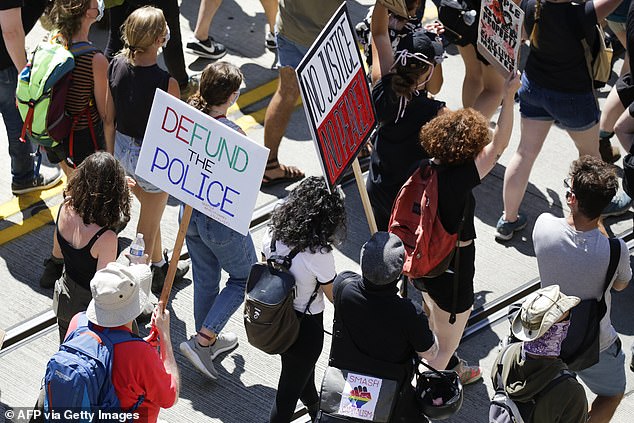 Seattle’s police department is so weakened thanks to the woke policies of its city council that it is no longer investigating reports of sexual assault, according to an internal report.

Two members of the embattled police force provided documentation to KUOW showing that last month not a single sexual assault case involving an adult victim was assigned to a detective.

‘The Seattle police department sexual assault unit is not at all investigating adult sexual assault reports or cases unless there was an arrest,’ said one source inside the force.

Only four detectives handle sexual assault and child abuse cases in Seattle at the moment – an indication of the widespread staff shortage affecting the demoralized force.

In the city of 724,000, 16 percent of officers are on leave, while others have left permanently.

Seattle protesters calling for the police to be defunded are pictured marching in August 2020. The following month the city council adopted their call, and police numbers have been falling ever since 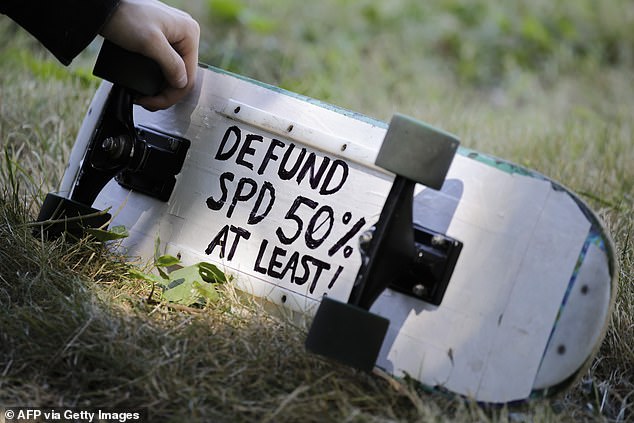 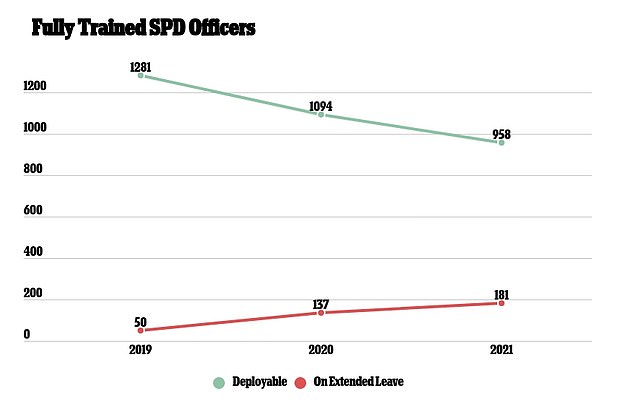 Seattle’s police force is struggling to retain and recruit officers, amid continuing pressure from the city council to defund the police

Between January 2020 and December 2021 at least 339 Seattle police officers retired or resigned, The Wall Street Journal reported – noting that the city has an authorized force of 1,347 but only some 1,000 deployable officers.

The failure to investigate sexual assault cases is a new development, but the problems within Seattle’s policing community have been brewing for several years.

In September 2020 Carmen Best, the widely respected then-chief of Seattle police, resigned hours after the city council made good on its promise to approve sweeping proposals that would cut about 100 officers and slash the department’s budget.

A year later, the budget was cut again.

Teresa Mosqueda, chair of the budget committee, claimed the budget includes ‘no cuts’ to ‘officers or officer salaries’ – and the proposal did include funds to hire 125 officers in 2022.

But critics said the strong message of ‘defunding the police’ was a powerful deterrent for anyone considering joining the force, and pushed many to retire early or resign.

Angelica Chazaro from Decriminalize Seattle said at the time: ‘I want to live in a city equipped to address the current and coming crises without resorting to armed cops to protect the rich at the expense of the poor.

‘This is why we demanded a Solidarity Budget, and why we celebrate every penny that leaves harmful policing practices and goes towards building a Seattle where we can all survive and thrive.’

She added: ‘Our cross-movement coalition helped us secure a defund of SPD two-years in a row, and we’ll be back for more.’

For some the measures were not extreme enough.

Kshama Sawant of the Socialist Alternative party, the lone vote against the budget, wanted a 50 percent cut.

Council President M. Lorena Gonzalez proposed reducing the size of the police force by eliminating 101 unfilled officer positions. That amendment failed after she ran for mayor and lost, 38 percent to 62 percent, against a moderate who campaigned on restoring the police department.

Despite the promises to stop the attacks on the police budget made by the new mayor, Bruce Harrell – who took office on January 1 this year – the results are yet to be felt, and the hollowed-out force is proving unable to cope.

This year so far, only 1.6 percent of cases investigated by the sexual assault and child abuse unit have resulted in an arrest, down from 14 percent in 2019.

Harrell campaigned on addressing ‘visible crime’ – promising to do more to combat homelessness, which is more of an issue in Seattle than almost any other city in the United States, with only New York and Los Angeles harder hit. 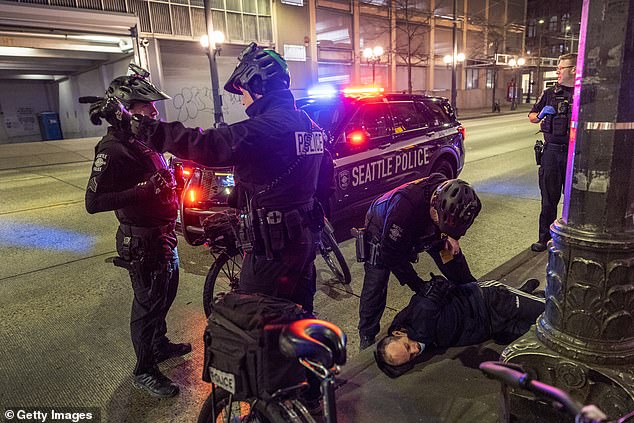 Seattle police are pictured on March 10 detaining a man suspected of dealing drugs, as part of the mayor’s push to target ‘visible crimes’ 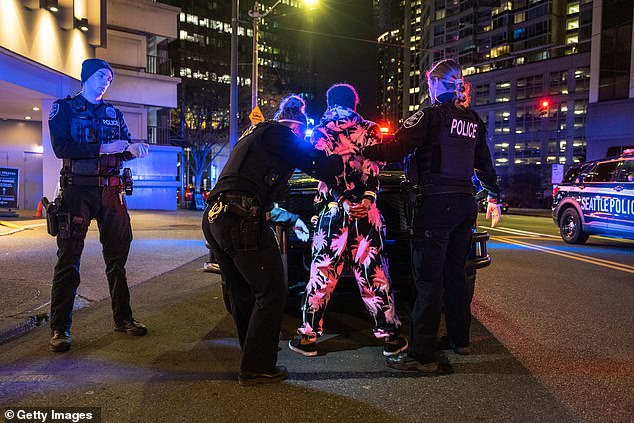 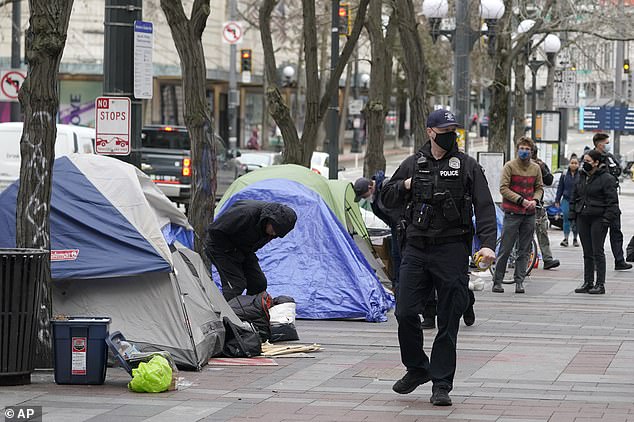 Seattle police are pictured on March 11, beginning the clearing and removal of a homeless encampment in Westlake Park in downtown Seattle

Harrell, a former civil rights and employment attorney who during his legal career challenged the likes of Boeing and the city of Seattle, said the police force, when he took over, was ‘devastated and demoralized’.

He has noticeably increased the number of homeless encampment removals, noting in an assessment of his first 100 days that the city has done 30 encampment clearings and made over 300 housing referrals since the start of his term.

But his focus on homelessness has been at the expense of other areas.

At least seven patrol officers have been moved over to help empty tent encampments as part of the Alternative Response Team, KUOW reported.

Other Seattle officers are tasked with targeting city crime ‘hot spots’ and clamping down on people purchasing and selling drugs and stolen goods.

‘Those officers, while certainly needed, will be spending much of their time working with homeless people who haven’t asked for help from the City and in many cases won’t accept it,’ the officer wrote in a document obtained by KUOW.

‘Meanwhile vulnerable crime victims who desperately want and need help from SPD are being put on hold.

‘And people in the sexual assault unit are left wondering: If there were seven officers to spare, why couldn’t one or two have been assigned to them?’ 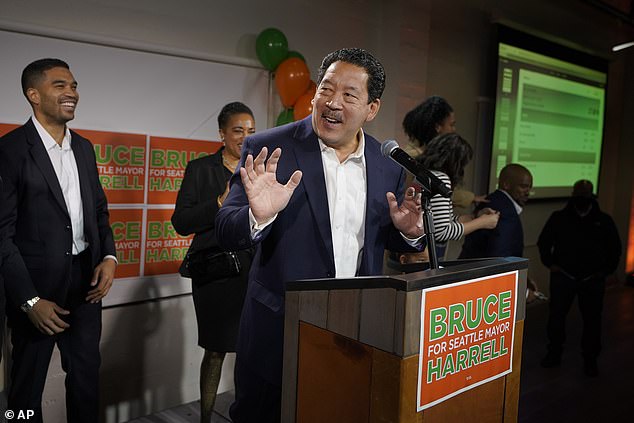 Bruce Harrell, the mayor of Seattle, is pictured on November 2, winning the election. He took over on January 1

Crimes against children are considered the highest priority thanks to a Washington state law, which means they must be investigated immediately. Adult sex assault cases have a longer window for an investigation to begin.

‘Our child cases are increasing due to the fact that children are coming back to school from COVID,’ the employee said. 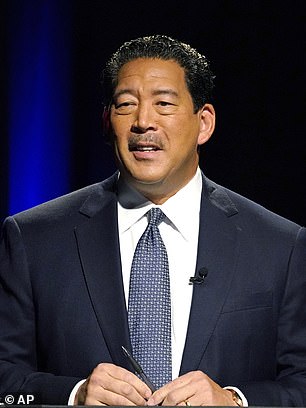 Harrell has focused on ‘visible crimes’, but is hampered by a shortage of police officers

‘There’s more reporting, and we are seeing an aggressive level of child abuse than we have seen previously.’

Mary Ellen Stone, chief executive officer of King County Sexual Assault Resource Center, told KUOW that victims were being asked to wait a year and a half to even give their disposition.

Amid a backlog of cases in King County Superior Court, there was 408 sexual assault victims who had been waiting on average 563 days for disposition, she said.

‘We want to look at this not as ‘Oh, my goodness this all of a sudden happened,’ Stone said.

‘But this has been the state for some time, and now it’s worse.’

Jordan Walker, a legal advocate with the King County Sexual Assault Resource Center, told KUOW that the psychological impact of the delays was significant.

‘When the front door into a criminal case, into someone hearing your story, someone looking into your story, when that door is locked, and you can’t even get in, the whole system can feel disenfranchised,’ Walker said. 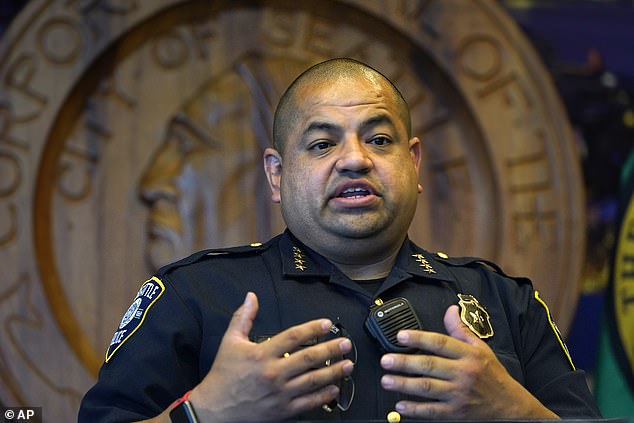 Adrian Diaz, the interim police chief – who is now hoping to be appointed to the job permanently, to replace Best – has complied with the mayor’s wishes and is focused, his spokesman said, on deterring ‘crime through proactivity.’

Harrell’s office told KUOW after they published the story that ‘any lack of urgency around sexual assault investigations or arrests is wholly unacceptable.’

They blamed the problem on a staff shortage, which they inherited.

‘When we assumed office, the SPD Sexual Assault Unit had a depleted number of deployable staff and our evaluation of these limited resources underscore the need for increasing SPD staffing to ensure justice for survivors,’ they said.

The mayor said he had already asked Diaz for ‘detailed and data-based information on the status of sexual assault investigations and what immediate improvements can be made in this area, including additional staff.’

The mayor added: ‘Our administration’s proposed budget will reflect this priority by increasing detectives, resources, and specific training for investigations.’

Restaurant boss, 45, who treated a Bulgarian kitchen porter ‘like a slave’ faces damages...

Crowds gather on The Mall for Platinum Jubilee celebrations – beginning with Trooping the...

Tom Hanks is seen looking gaunt back in NYC after video emerged of him...