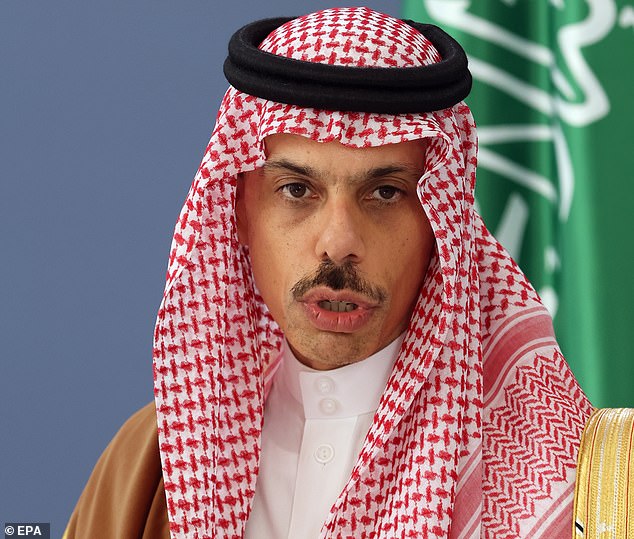 Saudi Arabia claimed the White House did in fact ask them to delay their oil production cut until after midterm elections as it hit back against claims the move was designed to aid Russia.

Last week OPEC+ announced it would cut oil production by two million barrels per day, in a major blow to the Biden administration that for months had asked them to instead increase production. Production cuts are already jacking gas prices back up – $3.91 is the average cost per gallon as of Thursday.

Russia, which relies on fuel exports to bankroll its invasion of Ukraine, is sure to benefit from the higher prices.

‘The Government of the Kingdom clarified through its continuous consultation with the U.S. Administration that all economic analyses indicate that postponing the OPEC+ decision for a month, according to what has been suggested, would have had negative economic consequences,’ Saudi Foreign Minister Prince Faisal bin Farhan Al Saud said

On Wednesday State Department spokesman Ned Price refused to confirm reports the Biden administration had begged the Saudis to wait and spare them the political consequences in next month’s election.

‘I certainly can’t confirm that report. What I can confirm is that we conveyed a consistent message to the Saudis: energy supply needs to meet energy demand. We have made the point repeatedly that we have a multiplicity of interests with Saudi Arabia; energy is one of them,’ Price said.

‘And in the context of those discussions regarding energy, we have had senior members of the administration travel to Saudi Arabia in recent months. This was not—this engagement did not take place solely in the context of October 2022 or September 2022,’ he added.

But a Saudi statement released hours later implied that the U.S. did ask for at least a one-month delay. 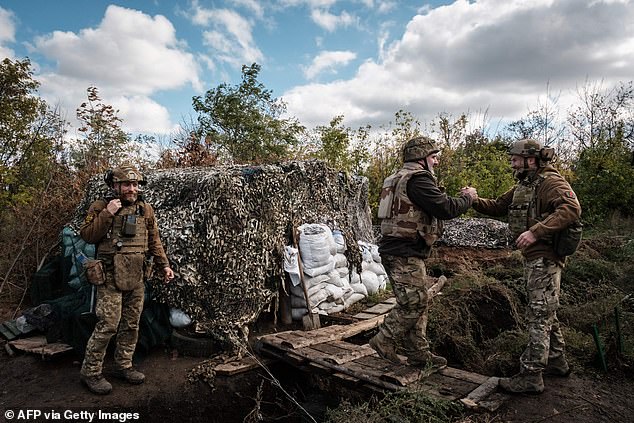 Soldiers of Ukraine’s 5th Regiment of Assault Infantry greet each other at a front line near Toretsk in the Donetsk region on October 12, 2022

‘The Government of the Kingdom clarified through its continuous consultation with the U.S. Administration that all economic analyses indicate that postponing the OPEC+ decision for a month, according to what has been suggested, would have had negative economic consequences,’ Saudi Foreign Minister Prince Faisal bin Farhan Al Saud said.

It was never likely that such a request would have been granted as it’s widely believed that Saudi Crown-Prince Mohammed bin Salman ordered the cut at least in part to spite Biden and Democrats in the midterm elections.

Biden himself had a controversial meeting with the crown prince, beginning with a famous fist bump rather than a handshake, in July.

After OPEC+ announced the decision, White House press secretary Karine Jean-Pierre called the move a ‘mistake’ and accused the Saudis of ‘aligning with Russia.’

The foreign minister said such an accusation is intended to ‘distort the facts’ and claimed Saudi Arabia has taken a ‘principled position’ with respect to the Russia-Ukraine war.

‘The Government of the Kingdom of Saudi Arabia would first like to express its total rejection of these statements that are not based on facts, and which are based on portraying the OPEC+ decision out of its purely economic context,’ bin Farhan Al Saud said in a statement.

The foreign minister said that Saudi Arabia supports UN resolutions regarding the war and rejects ‘any infringement on the sovereignty of countries over their territories.’

‘The Kingdom stresses that while it strives to preserve the strength of its relations with all friendly countries, it affirms its rejection of any dictates, actions, or efforts to distort its noble objectives to protect the global economy from oil market volatility,’ bin Farhan Al Saud said.

The production cut incensed lawmakers, who questioned why the U.S. had been selling arms to the Middle Eastern nation and ignoring human rights abuses and its role in the war in Yemen if it wasn’t going to get oil out of the deal.

Biden claimed that Riyadh would face ‘consequences’ as aides announced the U.S. would be reevaluating its relationship with the Saudis.

‘There´s going to be some consequences for what they’ve done with Russia,’ Biden said in a CNN interview aired Tuesday evening.

‘I’m not going to get into what I’d consider and what I have in mind,’ he added. ‘But there will be – there will be consequences.’

How ‘hero’ Sea World pilot who made miraculous helicopter crash landing had earned 5...

Pete Buttigieg tells airline execs to clean up act before July 4 after disastrous...