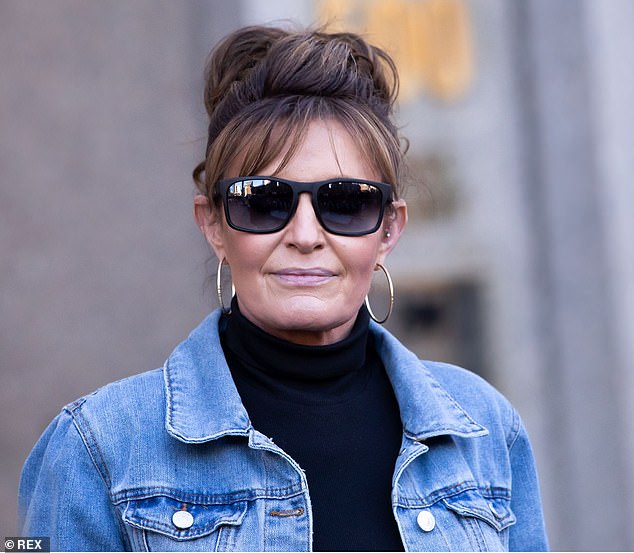 Former Alaska governor and vice presidential candidate Sarah Palin announced Friday that she’s running for a seat in the House of Representatives in order to combat the ‘far-left,’ which she said is ‘destroying the country.’

Palin, 58, has joined a crowded field of nearly 40 candidates looking to fill the seat vacated by the late U.S. Rep. Don Young, whose death last month threw Alaskan politicians in a frenzy.

In a statement, Palin said: ‘Public service is a calling, and I would be honored to represent the men and women of Alaska in Congress, just as Rep. Young did for 49 years.

‘America is at a tipping point,’ she said in the statement. ‘As I’ve watched the far left destroy the country, I knew I had to step up and join the fight.’ 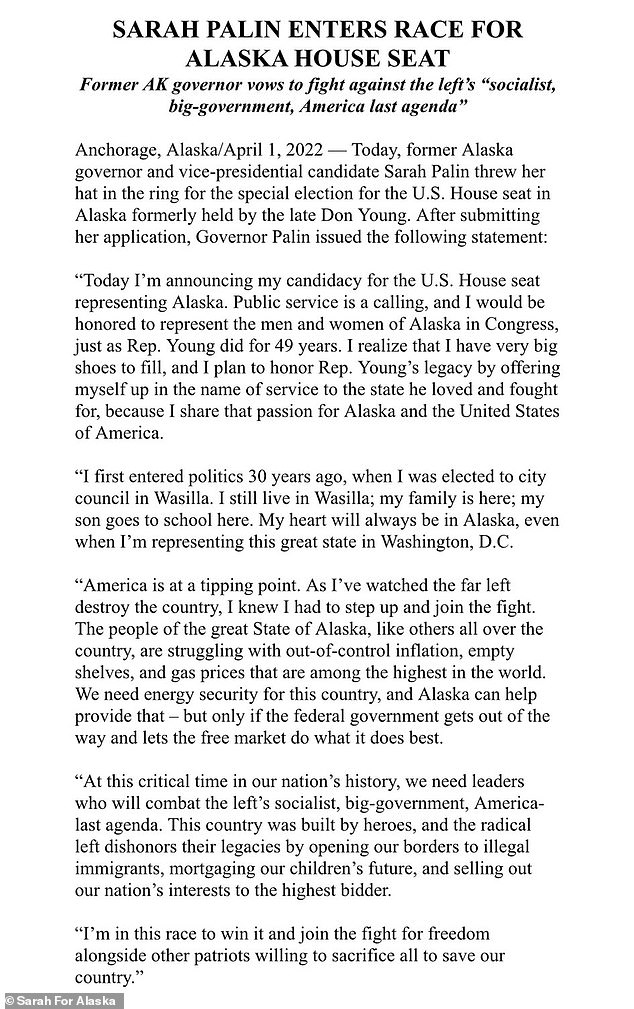 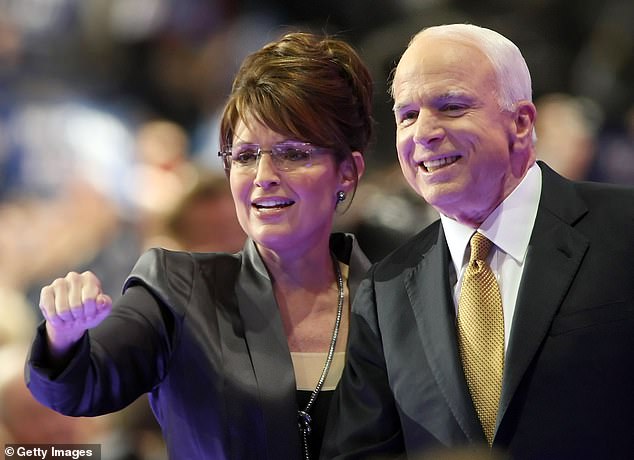 Sarah Palin became a household name when she became the late Sen. John McCain’s running mate for the 2008 election. A year after their defeat, Palin stepped down early as governor of Alaska and has not held public office since

Palin said that her fellow Alaskans, just like the rest of America, are struggling with rising inflations rates, supply shortages and soaring gas prices, problems she attributed to the far-left and the current administration.

‘At this critical time in our nation’s history, we need leaders who will combat the left’s socialist, big government, America-last agenda,’ she said.

‘I’m in this race to win it and join the fight for freedom alongside other patriots willing to sacrifice all to save our country.’

Palin fist entered public office nearly 30 years ago when she won a city council seat in her home of Wasilla, Alaska, becoming mayor in 1996.

She rose in prominence and was elected to the governor’s seat in 2006.

Palin was in her first term as Alaska’s governor and became a household name overnight when the late Sen. John McCain chose her to be his presidential running mate during the 2008 campaign.

She was the first Republican woman to be selected to serve as vice president, but the Republican ticket lost that race to Democrats Barack Obama and Joe Biden.

In July 2009, Palin announced that she wouldn’t run for re-election and would step down from the governorship before the end of her first term.

She hasn’t held public office since. 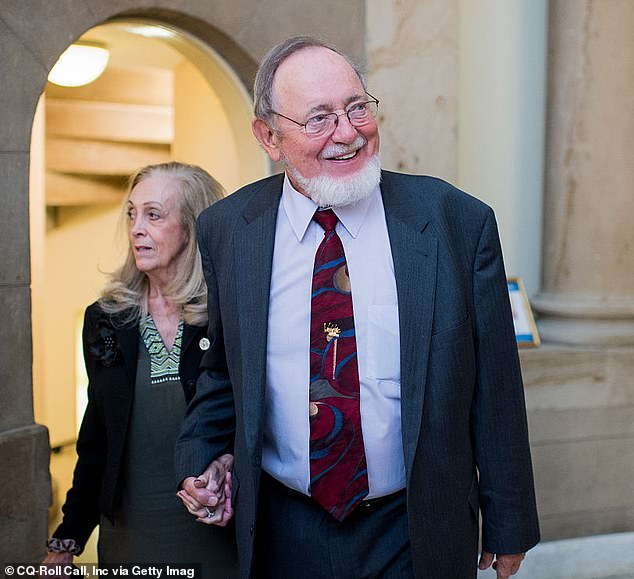 Palin has joined a crowded field of nearly 40 candidates looking to fill the seat vacated by the late U.S. Rep. Don Young (right) who passed away last month 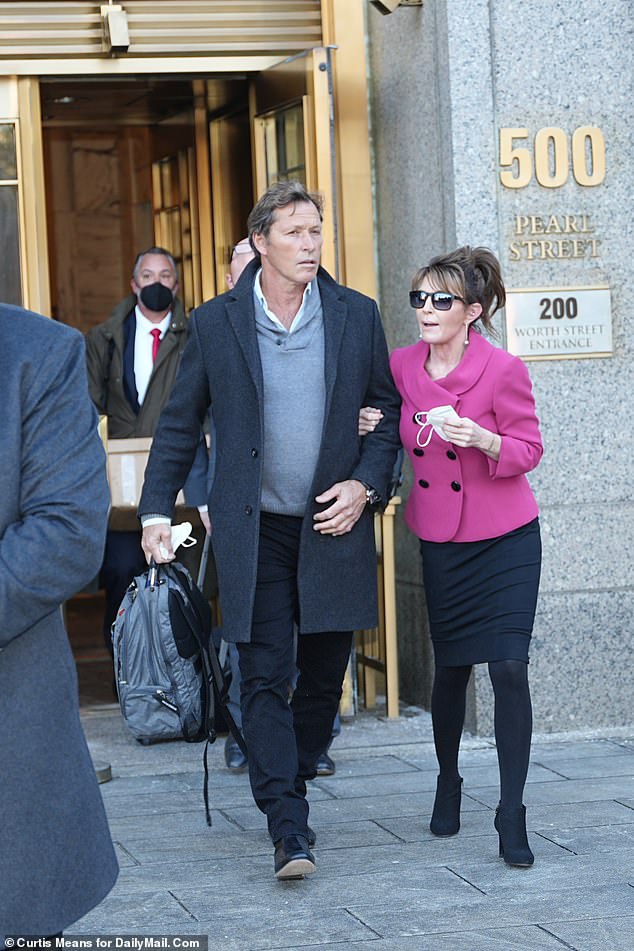 Palin made recent news with her defamation trial against the New York Times, which she lost, as well as touting her new boyfriend, New York Rangers Legend Ron Duguay 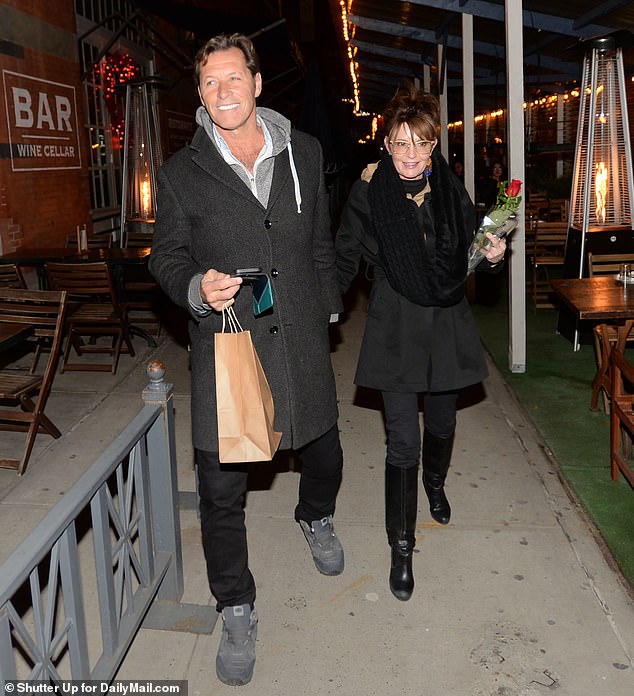 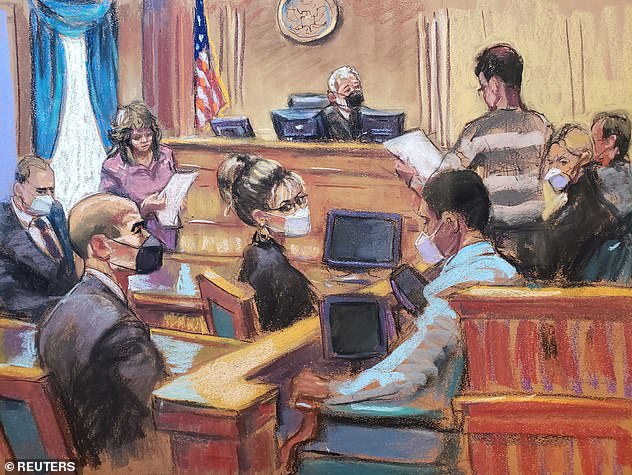 Palin is seen in court in Manhattan on February 15 as the jury returned their verdict – despite the judge having  made his decision to throw the case out, which was known on the previous day after jurors received notifications on their phones

Palin has, however, continued to stay in the public eye – through appearances on conservative outlets like Newsmax and on reality TV shows, including The Masked Singer.

She also turned heads when she began dating New York Rangers Legend Ron Duguay, as the two were pictured enjoying romantic meals during her most recent birthday in New York City.

She was in the spotlight recently following her court loss to the New York Times in February, who she sued for allegedly defaming her in a June 2017 editorial that incorrectly linked her to a 2011 mass shooting in Arizona where six people died and then-congresswoman Gabby Giffords was seriously wounded.

The Times acknowledged that the editorial wrongly described both the map, and any link to the shooting, but said the mistake wasn’t intentional.

A day before the February 15 verdict, U.S. District Judge Jed Rakoff said he would dismiss the case because Palin had not showed the Times acted with ‘actual malice.’

Palin’s attorneys have asked the court for a new trial and requested that Rakoff be disqualified from the case.