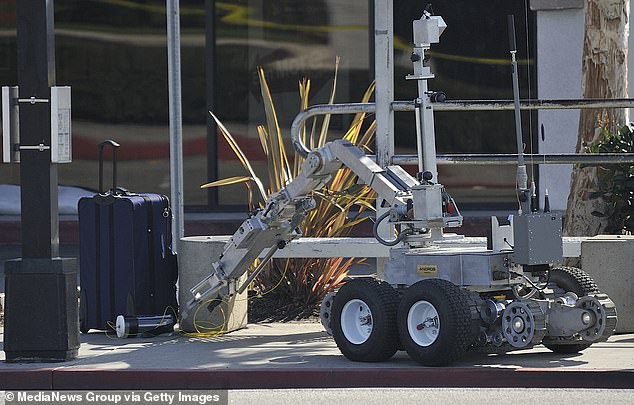 The San Francisco Police Department (SFPD) is proposing to use robots to kill suspects in ‘rare’ circumstances – with the force’s 12 bots set to assist officers with deadly force and ‘ground support’.

The new policy proposal is to be debated next week by the San Francisco Board of Supervisors Rules Committee and will define how the SFPD is allowed to use its military-style weapons.

One way the machines can cause deadly harm is by attaching a PAN disruptor device – which uses shotgun shells – to the robot. This can then fire bullets at the suspect.

Another method would be strapping explosives to a robot and then using it to blow up a suspect – which was a technique used in Dallas in 2016.

The draft policy has been scrutinized over the past several weeks by supervisor’s Aaron Peskin, Rafael Mandelman and Connie Chan, who make up the committee.

Peskin, the chair of the committee, initially attempted to limit the SFPD’s authority over the robot’s.

‘Robots shall not be used as a Use of Force against any person,’ Peskin wrote.

The San Francisco Police Department (SFPD) is proposing to use robots to kill suspects in ‘rare’ circumstances. They currently have 12 robots in their artillery including bomb detecting robots like this one from Long Beach California 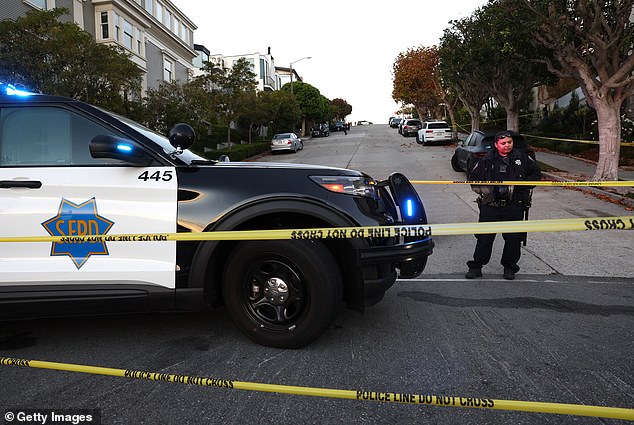 This was struck out by the police department who replaced it with language that codifies the department’s authority to use lethal force using robots.

‘Robots will only be used as a deadly force option when risk of loss of life to members of the public or officers are imminent and outweigh any other force option available to SFPD.’

Robot use-of-force has never been approved in San Francisco, nor has it been prohibited.

A version of the draft policy was unanimously accepted by the rules committee last week and will come before the full board on November 29.

‘The original policy they submitted was actually silent on whether robots could deploy lethal force,’ said Peskin to mission local.

He added that he decided to approve the SFPD’s caveated guidelines because the department had made the case that ‘there could be scenarios where deployment of lethal force was the only option.’

Advocates and lawyers who opposed the militarization of police said that they are less convinced that the policy should be green lit.

‘We are living in a dystopian future, where we debate whether the police may use robots to execute citizens without a trial, jury, or judge,’ said Tifanei Moyer, senior staff attorney at the Lawyers’ Committee for Civil Rights of the San Francisco Bay Area.

Moyer leads the organization’s work on police misconduct and militarization.

‘This is not normal, no legal professional or ordinary resident should carry on as if it is normal,’ she added. 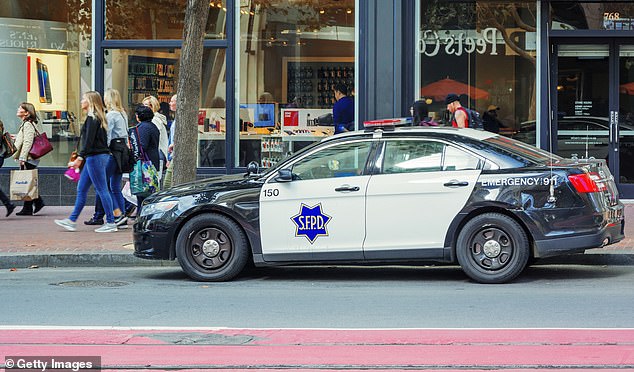 The draft policy has been scrutinized over the past several weeks by supervisor’s Aaron Peskin, Rafael Mandelman and Connie Chan, who make up the committee 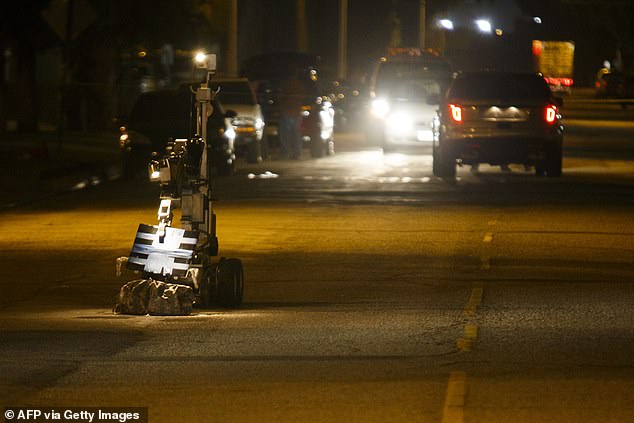 A bomb squad robot can be seen investigating a suspicious bag. If the policy goes ahead it will mean they may be used when risk of loss of life to members of the public or officers is imminent and outweigh any other force option

The SFPD has 17 robots, 12 of which are fully functional but have never been used to attack people.

The robots are remote-controlled and are typically used to investigate and defuse potential bombs or to survey areas too difficult or dangerous for officers to access.

The uses of the technology as described in the new draft policy include ‘training and simulations, criminal apprehensions, critical incidents, exigent circumstances, executing a warrant or during suspicious device assessments.’

In 2016, the Dallas police force strapped plastic explosives to a robot and used it to blow up a shooter who had killed five officers, in the first U.S. instance of a police robot killing a suspect.

One of the SFPD’s robots, the Remotec F5A, is the same model as the one used by Dallas police.

At the time Dallas police chief David Brown told reporters that they had no other option.

‘We saw no other option but to use our bomb robot and place a device on its extension for it to detonate where the suspect was,’ he told the Guardian.

Police detonated the explosive, which destroyed a wall in the building and killed the suspect, leaving the $151,000 robot with only minor damage to its arm. 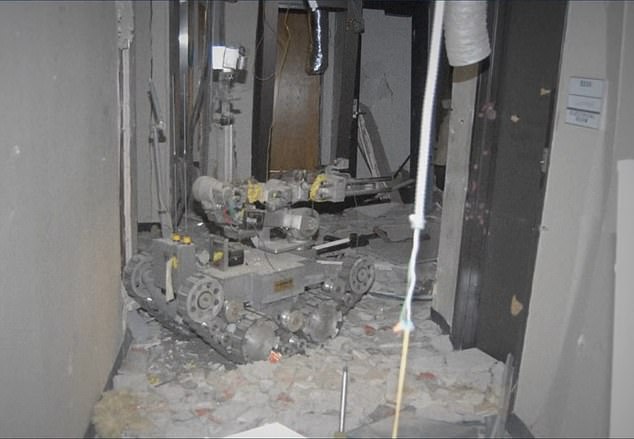 In 2016, the Dallas police force strapped plastic explosives to a robot and used it to blow up a shooter who had killed five officers, in the first U.S. instance of a police robot killing a suspect 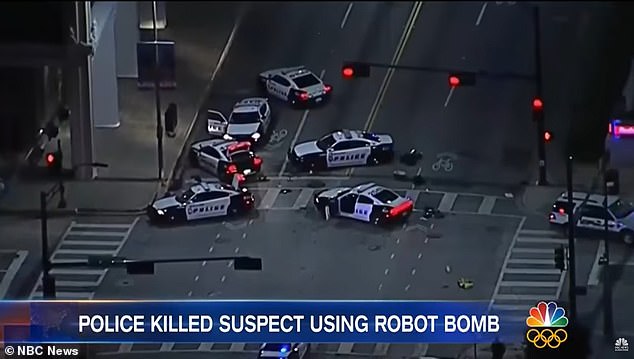 One of the SFPD’s robots, the Remotec F5A, is the same model as the one used by Dallas police at the time of the incident in 2016

One device they discussed was the PAN disruptor, a device that can be attached to a remote-controlled robot and uses a blank shotgun shell to disable a bomb by blasting it with pressurized water.

Oakland police acknowledged that, in emergencies, they could arm it with live rounds. The SFPD also has multiple PAN disruptors that can be attached to robots and fire shotgun shells.

Last month, Oakland police ultimately backed down and removed language that would have allowed them to kill using robots. They said they hope to pursue the option in the future.

Rueca said that the San Francisco Police Department ‘does not have any sort of specific plan in place’ for how lethal force would be used.

Cities across California are currently drafting new policies on the use of military weapons by local police forces, thanks to a state law called AB 481, which passed last year.

Figuring out the force options of robots is one small part of the law’s remit.

The law mandates that every police force in California must annually report its stock of all military-style weapons, their cost, how they can be used, and how they were deployed in the prior year.

The law gives local authorities, in San Francisco’s case, the Board of Supervisors, the ability to annually reject or accept the rules governing how the weapons are used.

The Board will also be required to sign off on any new military-style equipment before purchase, although the police will be able to replace any existing equipment up to a value of $10 million without approval. 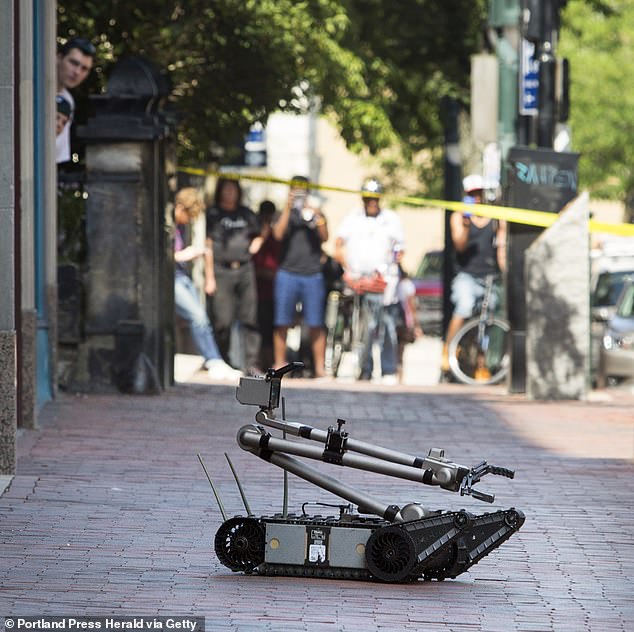 Once the rules are settled, the process will begin again with the Sheriff’s Department, which will need to create its own policy to stay in compliance with the AB 481 state law 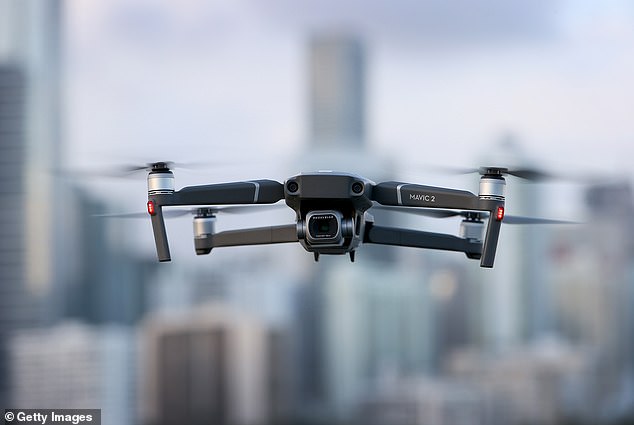 None of these units are designed to carry firearms, but at least some of them are capable of being used to kill.

Another point of contention with advocates is that the SFPD has not included personnel training or maintenance times in their valuation of the cost of their military-style weapons.

This appears to be required by AB 481, which states that costs must include ‘acquisition, personnel, training, transportation, maintenance, storage, upgrade, and other ongoing costs’ of the weapons.

Once the rules are settled, the process will begin again with the Sheriff’s Department, which will need to create its own policy to stay in compliance with AB 481.

‘The great news about this thing is that it can be evolved,’ said Peskin, adding that policy must be scrutinized and approved every year if the SFPD wants to keep using its weapons.

‘And I think we are starting off in a good place.’