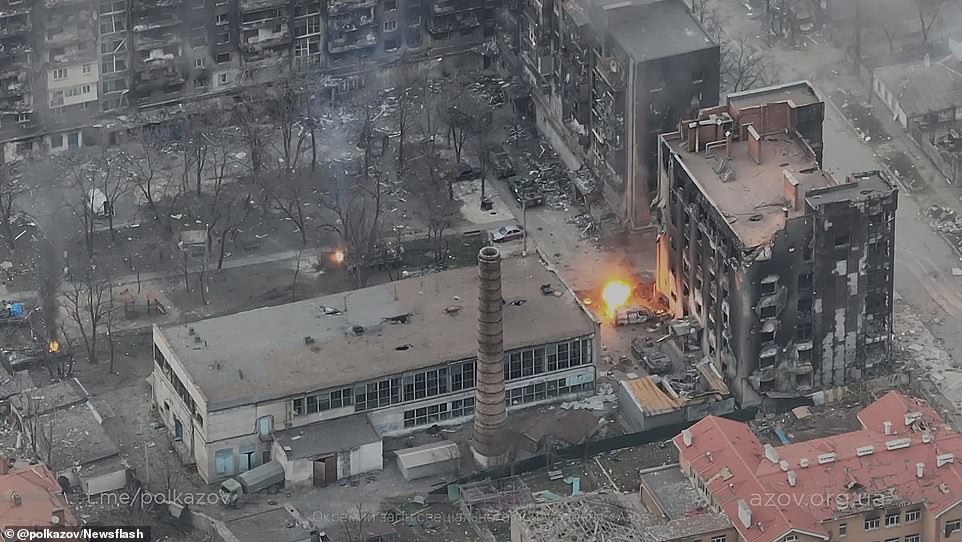 Russia has ‘unleashed chemical weapons on Mariupol’ as Liz Truss vows to hold Putin to account amid reports Ukrainian troops were hit by an agent dropped from a drone – after Zelensky warned of impending chemical attacks.

The unidentified agent is said to have been dropped on the southern port city from a Russian drone, according to unverified reports from the city’s Azov regiment.

Details of the assault, via the Telegram messaging app, say a ‘poisonous substance of unknown origin’ has led to the city’s defenders suffering from symptoms including breathing issues, ‘respiratory failure’ and ‘vestibulo-atactic syndrome’.

Foreign Secretary Liz Truss has said her department is working with partners to verify the claims.

She tweeted: ‘Reports that Russian forces may have used chemical agents in an attack on the people of Mariupol. We are working urgently with partners to verify details.

‘Any use of such weapons would be a callous escalation in this conflict and we will hold Putin and his regime to account.’

The alleged attack came just hours after a pro-Russian general in Donbas appeared to promote the idea of using chemical weapons, telling state media it would ‘smoke the Ukrainian moles out of the underground’.

Meanwhile, the Ukrainian Parliament tweeted to say it has received reports of Russian forces firing ‘nitric acid’ in the Donetsk region as it warned local residents to wear ‘protective face masks soaked in soda solution’. It is not clear if the incidents are linked.

It follows a warning from the Ministry of Defence suggesting that Russia could turn to the use of a deadly phosphorus bombs amid attempts to finally break heroic resistance in Mariupol.

While strictly not considered a chemical weapon, the substance burns fiercely and can cause horrendous injuries, and its use on civilians constitutes a war crime.

Mariupol has seen the most intense fighting since the Kremlin launched its attack on Ukraine and has suffered more than 10,000 civilian deaths to date, according to its mayor Vadym Boychenko.

He also warned the toll could rise beyond 20,000 and claimed Russian forces are bringing mobile cremation equipment into the city to dispose of bodies. 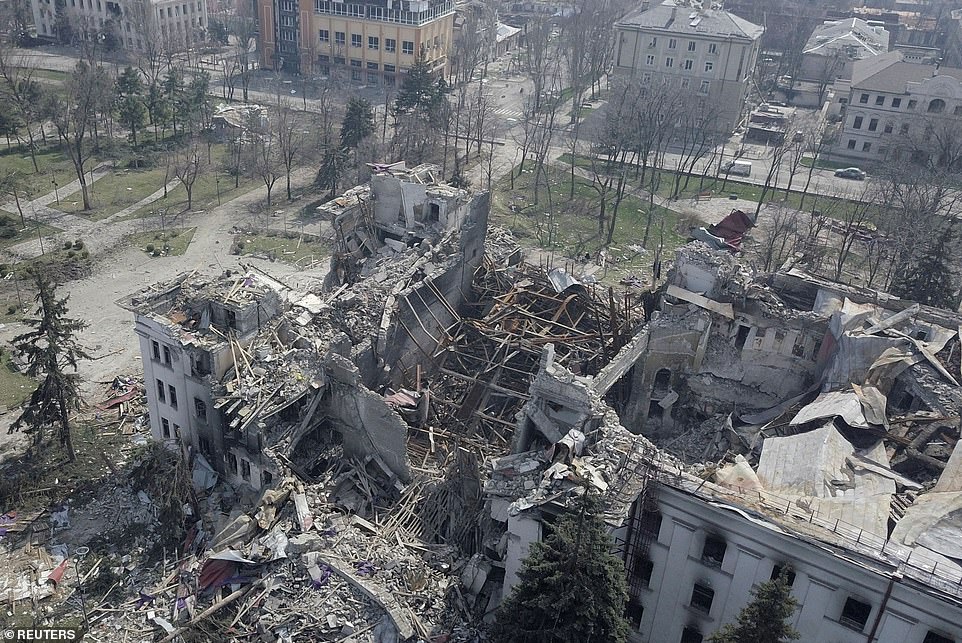 A theatre destroyed by Russian shelling in Mariupol on Sunday, a city that has been the focal point of Russian aggression since the outset of the war 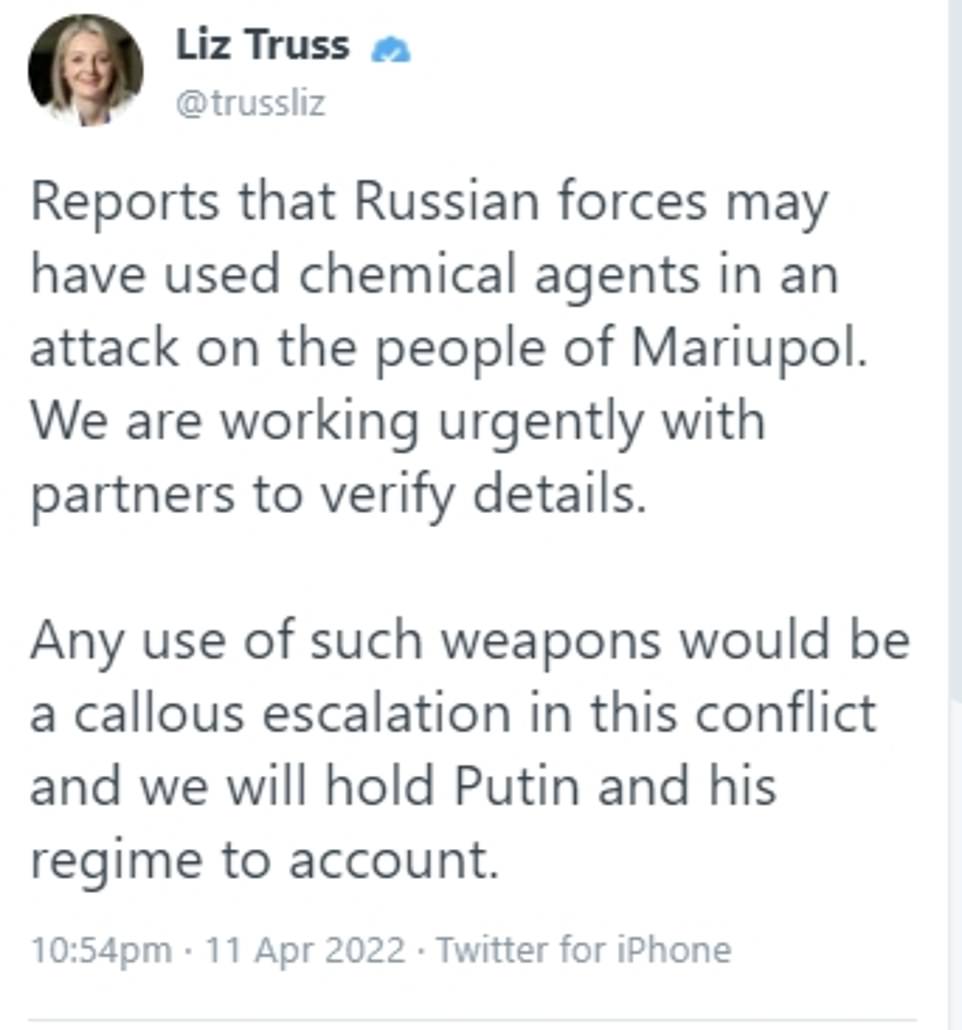 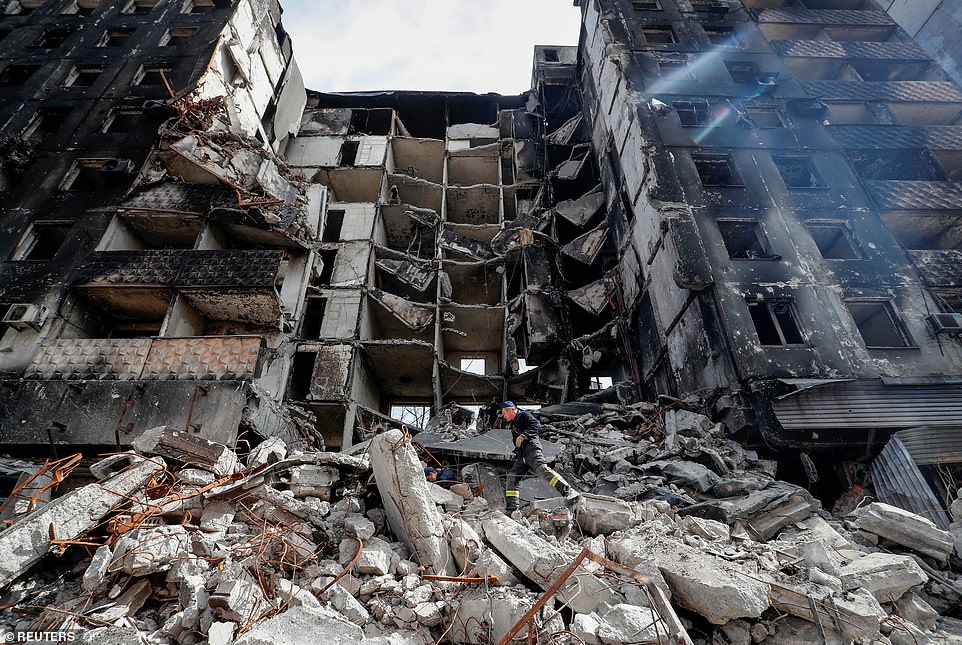 Emergency workers remove debris of a building destroyed in the course of the Ukraine-Russia conflict, in the southern port city of Mariupol on Sunday 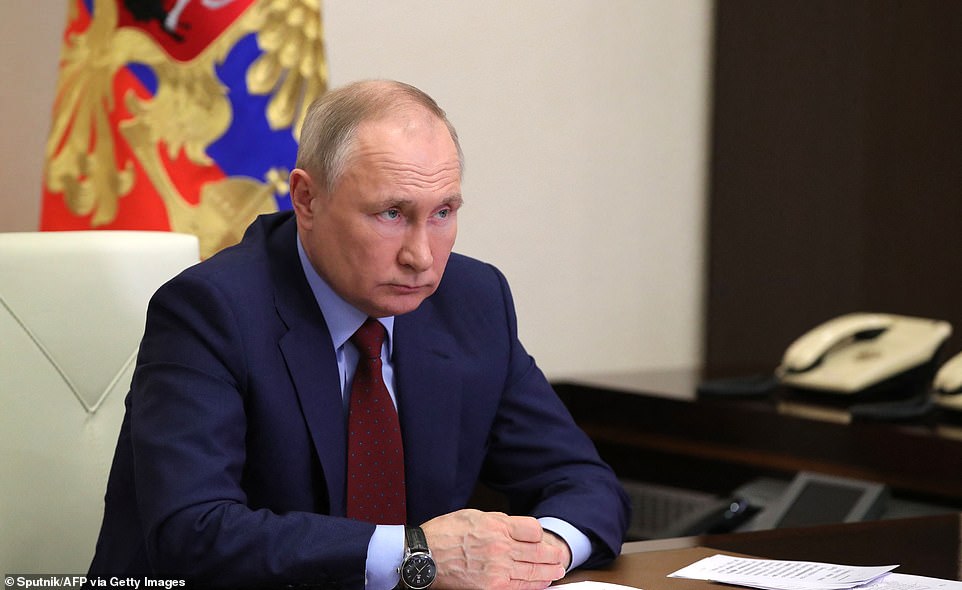 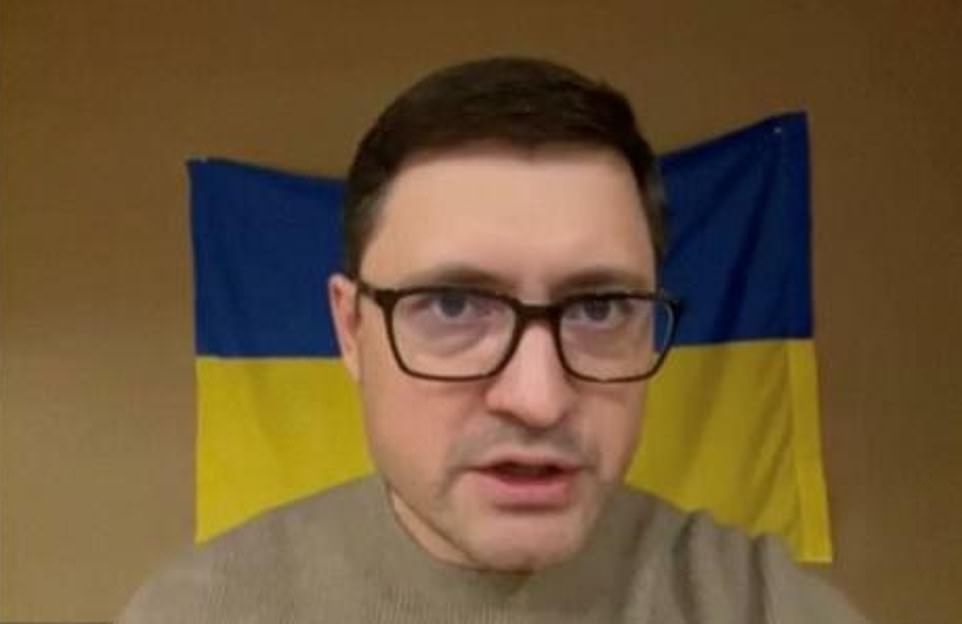 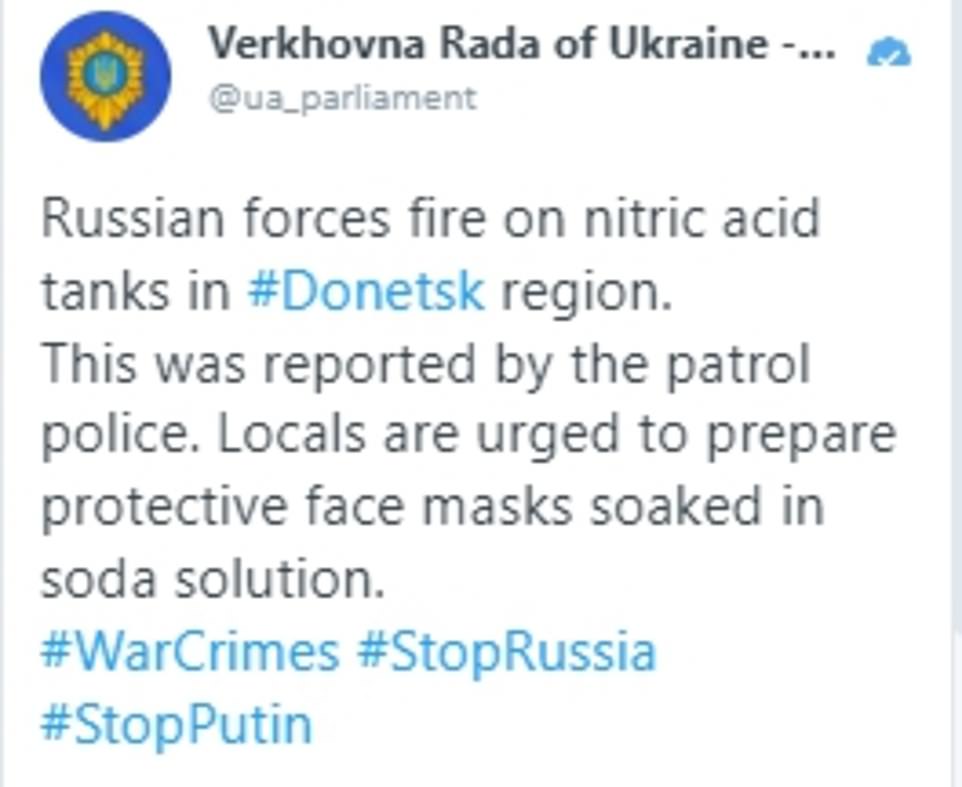 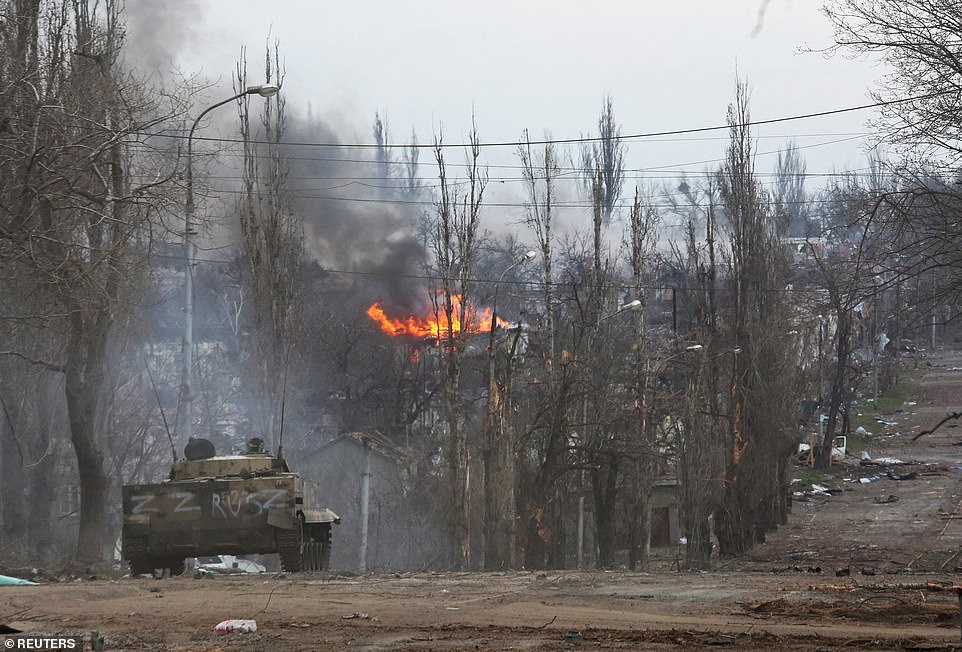 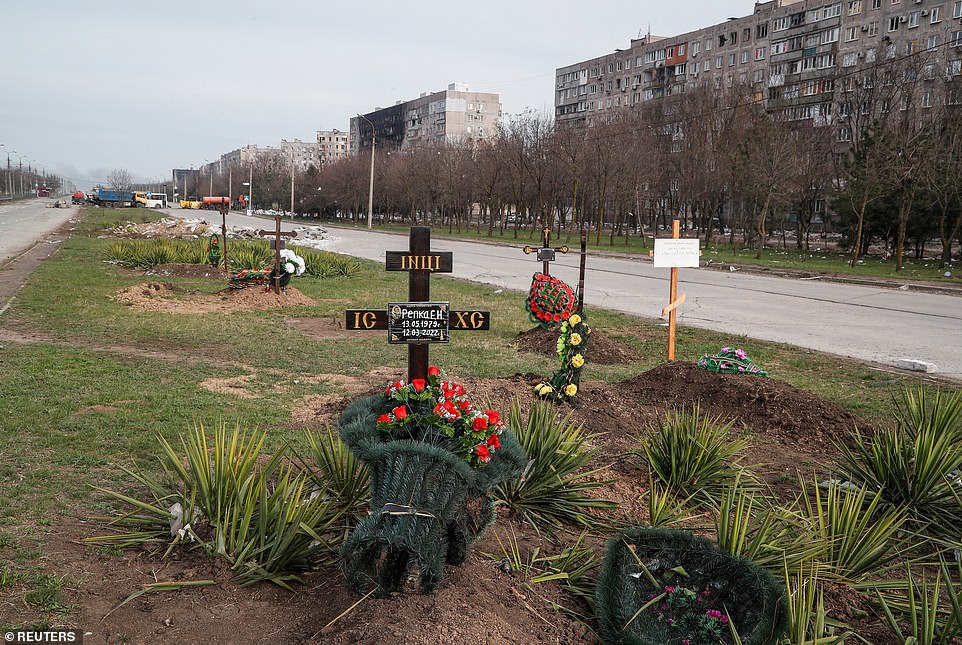 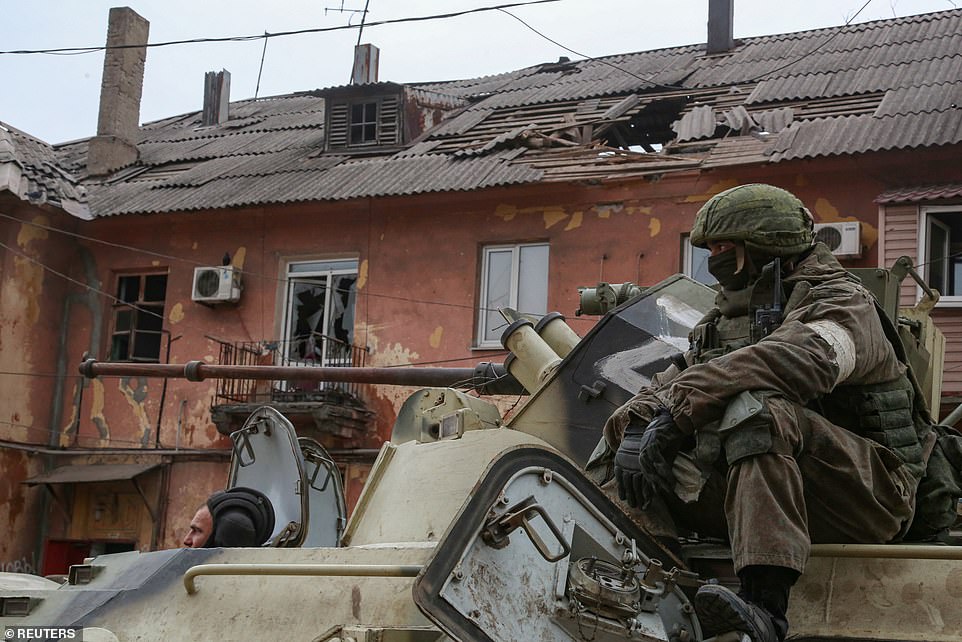 The mayor’s comments emerged as Russia claimed it destroyed several Ukrainian air-defence systems in what appeared to be a renewed push to gain air superiority and take out weapons described as crucial ahead of what is expected to be a broad new offensive in the east.

Capturing Mariupol, the main eastern port, would allow Moscow to link troops advancing from the east with those from Russian-annexed Crimea in the south and shift their focus to a new attempt to encircle the main Ukrainian force in the east.

Ukrainian marines have already said they are preparing for a ‘last battle’ to control Mariupol after being surrounded by invading Russian forces.

The 36th marine brigade of the Ukrainian armed forces said on Facebook that anyone whose limbs have not been torn off will be ordered to fight, and battles are currently being carried out by cooks, drivers and musicians.

They said earlier today: ‘Today will probably be the last battle, as the ammunition is running out.

‘It’s death for some of us, and captivity for the rest,’ it added, saying it had been ‘pushed back’ and ‘surrounded’ by the Russian army.

It said it had been defending the port for 47 days and ‘did everything possible and impossible’ to retain control of the city.

But Moscow today claimed it hit four S-300 launchers near the central city of Dnipro that had been provided by a European country it did not name.

Putin’s invasion stalled on several fronts as it met stiff resistance from Ukrainian forces, who prevented the Russians from taking the capital and other cities.

And the failure to win full control of Ukraine’s skies has hampered Moscow’s ability to provide air cover for troops on the ground, limiting their advances and exposing them to greater losses.

With their offensive in many parts of the country thwarted, Russian forces have relied increasingly on bombarding cities – a strategy that has left many urban areas flattened and killed thousands of people.

To date, Kyiv estimates it has killed 19,500 Russian troops, though the Kremlin has only admitted to 1,351 deaths in the conflict.

The catastrophic death toll comes as Ukrainian President Volodymyr Zelensky defended his criticism of NATO and the UN, saying he has had enough of diplomacy with Vladimir Putin.

‘I’m no longer interested in their diplomacy that leads to the destruction of my country. A lot of countries have changed their mind about Ukraine and about our people. But I think we’ve paid too high price for that.’

Ukrainian officials have also accused Russian forces of committing atrocities, particularly in the Kyiv region where mass graves were discovered outside a church in Bucha yesterday.

In Buzova, a village in the Kyiv region, Ukrainian officials said the bodies of 50 people, all of whom were shot at close range, were discovered on a road. Another mass grave with dozens of bodies was also found in the village. 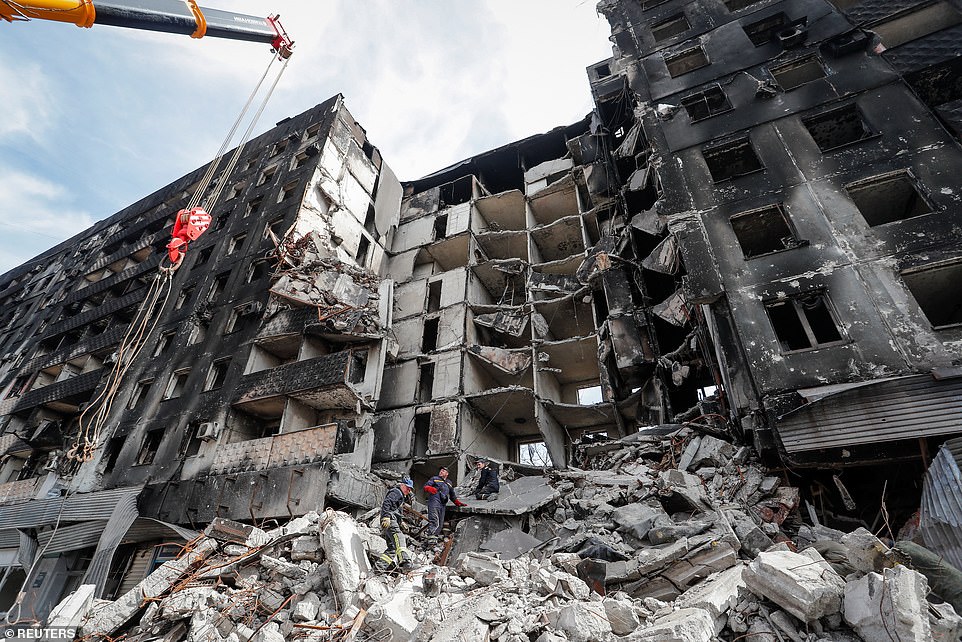 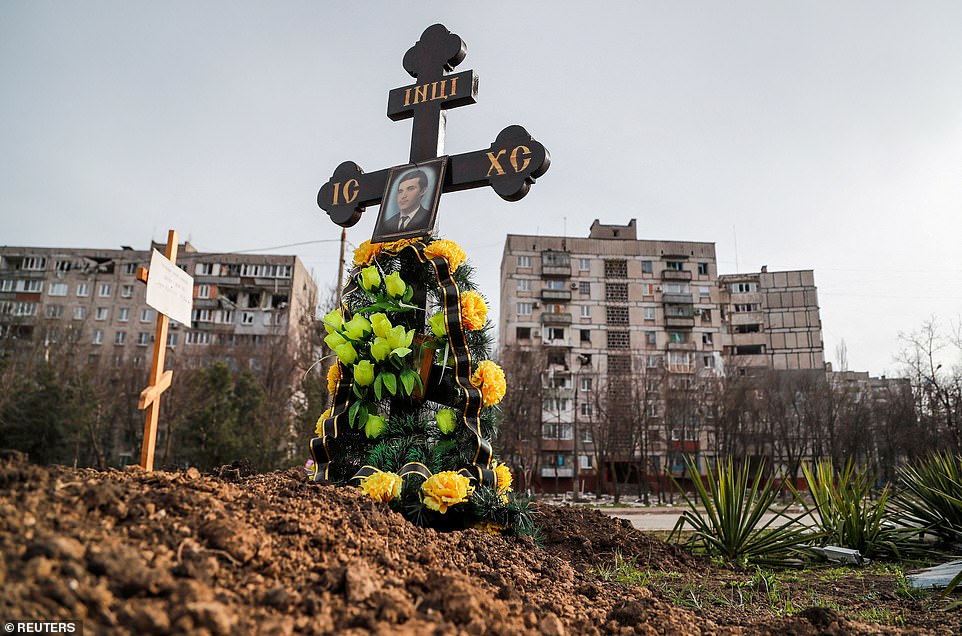 Graves of civilians have been dug next to apartment buildings in Mariupol, where more than 10,000 have died according to the city’s mayor 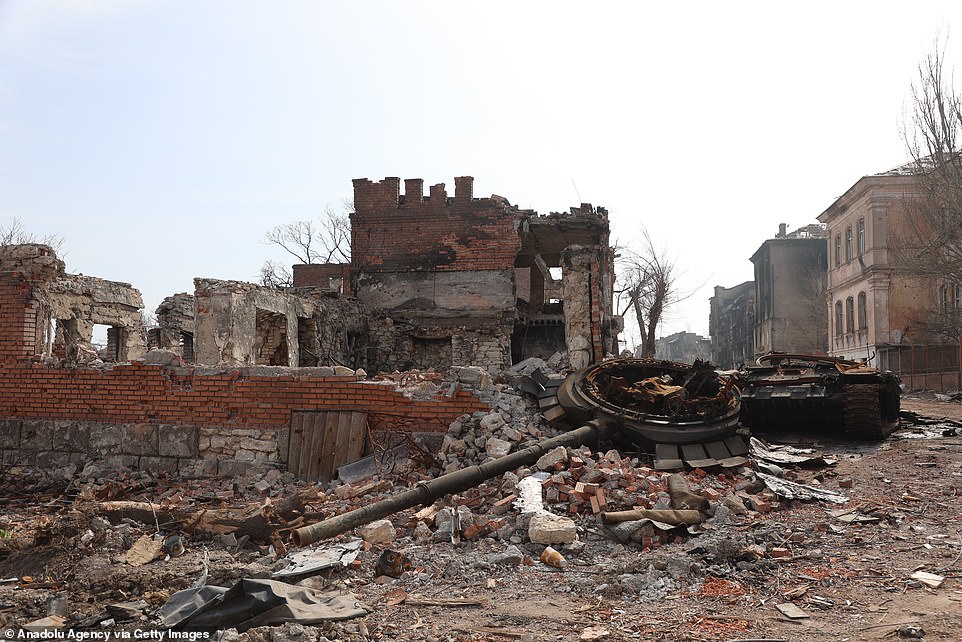 A heavy armoured vehicle is destroyed amid surrounding buildings in Mariupol

The MoD warned that Russia’s ‘continued reliance’ on unguided bombs in Ukraine increases the risk of further civilian casualties as the weapons decrease their ability to discriminate when targeting and conducting strikes.

An airstrike on a train station being used by civilians trying to escape the area also killed 57 people last week.

Mr Zelensky said on Sunday that the coming week could be crucial and that Western support – or the lack thereof – may prove decisive.

‘To be honest, whether we will be able to (survive) depends on this’, Mr Zelensky said.

‘Unfortunately, I don’t have the confidence that we will be receiving everything we need.’

His plea came as Putin is understood to be preparing to double or even treble his number of forces in the eastern Donbas region.

Following his troops’ failure to capture Kyiv and other parts of the country’s north after more than six weeks’ of fighting, the Russian president has withdrawn some of his forces.

Putin is now beginning to redeploy some of those troops towards the Donbas, parts of which are already controlled by Russian-backed separatist groups.

He is said to be eyeing a battlefield win in eastern Ukraine within the next month, so that it will coincide with Russia’s annual military parade in Red Square on 9 May.

The date marks the Nazis’ surrender in the Second World War.

However, although they noted Mr Putin would desire some form of victory by that date, Western officials have cast doubt on his hopes of doing so.

They have said there is an ‘incredibly important’ window for the West to increase support for Ukraine as Russia takes time to prepare a new offensive.

Biden apologizes for US pulling out of the Paris Agreement, says he wants to...

Ferne McCann says she ‘can’t wait for the viewers to see me happy’ ahead...

Woman found a receipt for Viagra in her partner’s pocket after a night out...

The Australian towns where property prices could soar in value thanks to the green...

The Block’s Omar and Oz reveal their exciting new career move after winning the...