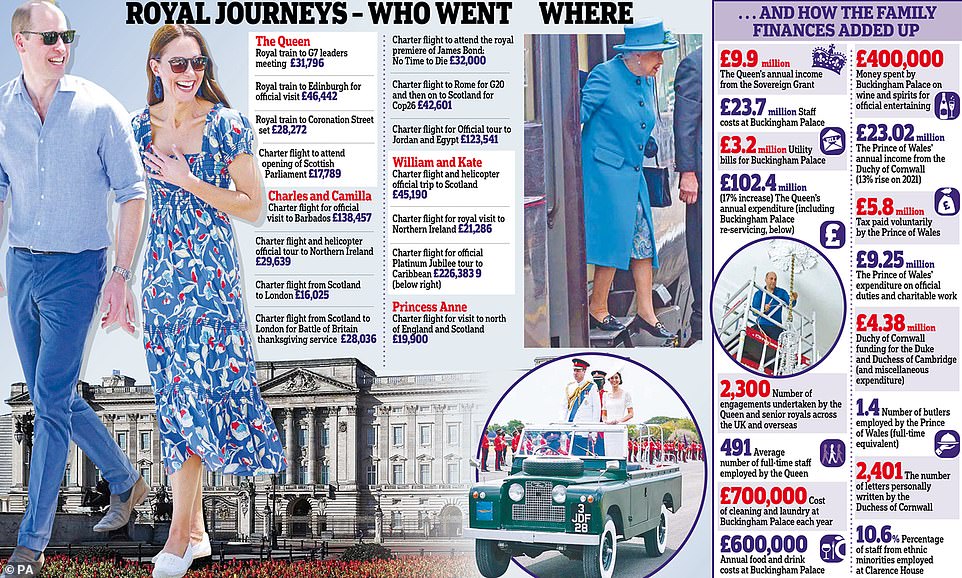 The Queen will continue to tighten her belt as a post-pandemic credit crunch bites even at Buckingham Palace.

Sir Michael Stevens, the monarch’s Keeper of the Privy Purse, said yesterday that while her annual review reflected ‘something of a return to normality’ for the royal household – with travel, investitures and garden parties starting up again – it also continued to be a ‘challenging’ time for the monarchy.

Expenditure was £102.4million last year – a rise of 17 per cent – with the majority being siphoned off by the major ten-year-programme of building works going on at Buckingham Palace. There was a 41 per cent increase in spending to £54.6million on the renovations alone.

Income at the palace was £18million down because of the pandemic.

The Sovereign Grant – the pot of taxpayers’ money provided by the Government to cover the cost of the Queen’s official duties and residences – remained static at £86.3million.

The palace managed to raise a further £9.9million through visitor opening and other money-generating schemes. But there was still a shortfall of £14.6million in the royal finances, which was met by dipping into the palace ‘reserves’.

The loss of visitors and other income during lockdown amounted to an £18million ‘hit’ over three years (Pictured: The Royal Family on the Buckingham Palace balcony during the Platinum Jubilee)

Sir Michael stressed that the use of these savings was ‘not unexpected’.

He explained that the palace had been wisely saving money from the start of the palace re-servicing project, when costs were lower, in preparation for when they would cost more. However, he also admitted that, like all major institutions, the palace was still suffering as a result of the Covid pandemic.

Now the royal courtiers could be allowed to WFH

Courtiers may be allowed to work from home as part of new post-pandemic ‘hybrid’ working practices.

Buckingham Palace revealed yesterday that it was conducting a review to decide whether the ‘flexible’ working arrangements currently operating across the household will be suitable in the future. Sources indicated they would be open to it, given the ‘changing expectations’ of current and prospective employees.

It came as Cabinet Secretary Simon Case, the head of the civil service, said Whitehall’s working-from-home culture was ‘here to stay’.

The loss of visitors and other income during lockdown amounted to an £18million ‘hit’ over three years, he said, with income still 50 per cent from pre-pandemic levels. Royal officials say it will take another two to three years for their finances to get back to an even keel.

And it is likely that they will be forced to put some of the money they had earmarked for general property maintenance towards the palace building works in order to keep the £369million project on time and budget.

Sir Michael said: ‘Looking ahead, with the Sovereign Grant likely to be flat in the next couple of years, inflationary pressures on operating costs and our ability to grow supplementary income likely to be constrained in the short term, we will continue to deliver against our plans and manage these impacts through our own efforts and efficiencies.’

Royal aides stressed that the works on Buckingham Palace were necessary to save it from ‘catastrophic’ failure – the electrics haven’t been replaced since the Second World War – and it would continue to be the base for the monarch and her family.

Yesterday’s report, officials said, demonstrated that the Queen, 96, continues to be ‘highly active as head of state and head of nation’.

She and her family conducted 2,300 engagements in the UK and overseas last year, with the sovereign undertaking 201 personally. The total cost per person of public funding to the royal family is £1.29 – excluding the cost of security.

For the first time, all three royal households published their diversity figures. Buckingham Palace employs 9.6 per cent of staff from ethnic minority backgrounds, compared to 8.5 per cent in 2020-21. Clarence House fares better with 10.6 per cent, while Kensington Palace – who have never published their figures before – say their BAME workforce equals 13.6 per cent.

‘That is then and this is now’: Cases of cash for Prince Charles ‘would never happen’ these days, source says

By Josh White for the Daily Mail

Charles faces criticism after it emerged he accepted charitable donations – reportedly totalling £2.5million and some of it in a suitcase – from a former Qatari prime minister.

But a royal source said such incidents have not happened in the past half-decade, adding: ‘That is then and this is now.’

The prince reportedly accepted the donations for his charity the Prince of Wales’s Charitable Fund (PWCF) from Sheikh Hamad bin Jassim between 2011 and 2015. 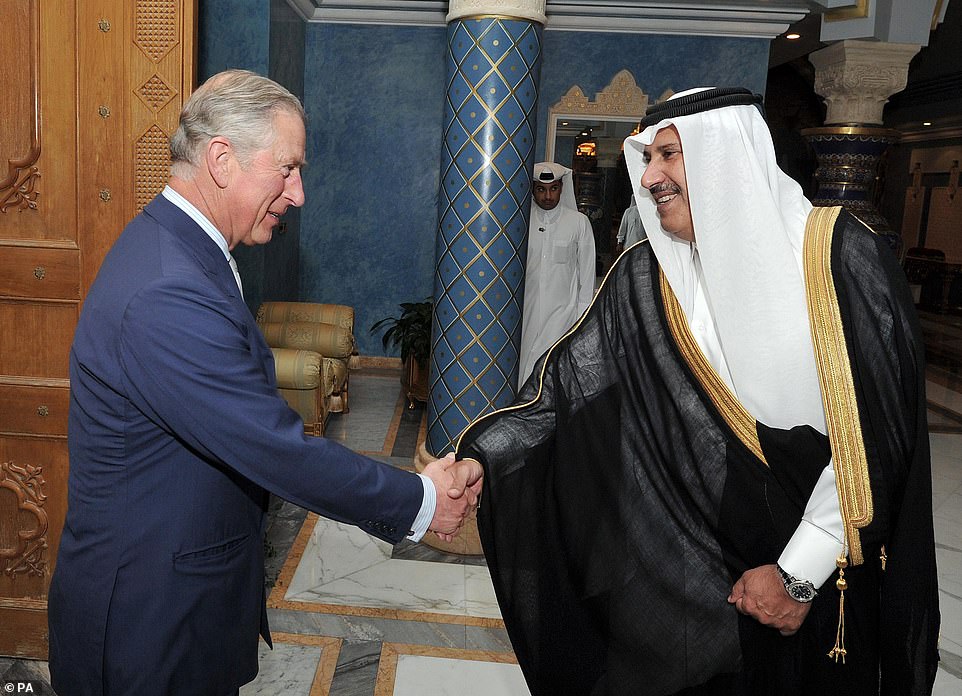 Harry and Meghan are now ‘financially independent’ and paid for their own flights when they visited England at Easter.

Royal officials also said the couple’s decision to repay £2.4million on their Frogmore Cottage home in Windsor was a ‘good deal’ for taxpayers.

A royal source said of the Sussexes’ financial independence: ‘Great credit to them… that has now been achieved.’

The accounts show the sum they paid to cover refurbishment of their former marital home – which they have used as a family only once since relocating to the US – includes undisclosed future rental costs.

The source revealed the money was ‘passed immediately to his [Charles’] charities, and it was his charities who decided to accept the money – that is a decision for them. And they did so, and as they confirmed, it followed all the right processes. The auditors looked at it. The Prince of Wales operates on advice. Situations, contexts change over the years.’

The source added: ‘For more than half a decade, with the situation as it has evolved, this has not happened, and it would not happen again.’

On one occasion a round £900,000 was said to have been handed over in carrier bags from luxury shop Fortnum and Mason, according to a report in The Sunday Times.

Another time, the sheikh was said to have been in a private meeting with the prince at Clarence House, in 2015, when he gave him £850,000 in a holdall.

The PWCF – which was founded in 1979 with a mission to transform lives and build sustainable communities – awards grants to UK-registered non-profit organisations to deliver projects in the UK, the Commonwealth and overseas.

A Clarence House spokesman said: ‘Charitable donations received from Sheikh Hamad bin Jassim were passed immediately to one of the prince’s charities who carried out the appropriate governance and have assured us that all the correct processes were followed.’

£226,000 bill for flying William and Kate on tour of the Caribbean

The Duke and Duchess of Cambridge’s flights for their controversial Caribbean tour cost the taxpayer more than £226,000, the royal accounts have revealed.

It was the single most expensive trip by a member of the Royal Family in the last financial year.

The total travel bill for the monarchy’s official duties, funded by the taxpayer through the Sovereign Grant, came to £4.5million in 2021-2022 – a rise of 41 per cent – as members of the royal family once again began to embark on overseas tours at the request of the British government amid the lifting of Covid restrictions.

The Prince of Wales’s charter flight to Barbados to mark the country’s transition to a republic came to more than £138,000.

But royal aides revealed that the future king had ‘personally’ spearheaded a switch to the use of sustainable aviation fuel on royal flights.

The ministerial RAF Voyager jet – used by royal family and the Government – is now run on sustainable aviation fuel, as is the Queen’s helicopter.

Sir Clive Alderton, the prince’s principal private secretary, said: ‘The prince has personally driven the move to the use of sustainable aviation fuel.’

A senior royal source said Charles was working to ‘reconcile the conflict’ between his responsibilities travelling on royal duties and his role as an environmental campaigner.

‘There is a rigorous process that you only get to top-end travel options if every other option fails,’ the source added.

Kourtney Kardashian is seen for the first time since her boozy Las Vegas wedding...

Schoolgirls call for a ban on school uniforms being sold in sex shops and...

Rail boss told to get commuters back from the office is STILL mainly working...