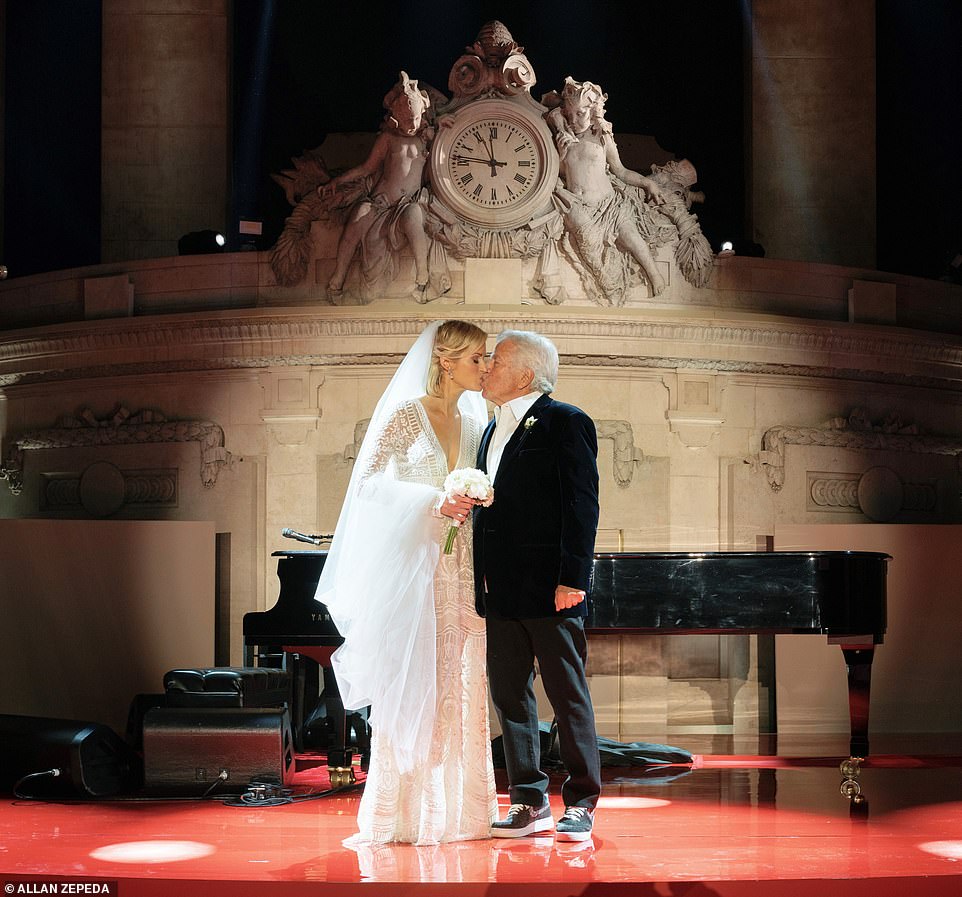 Kraft, 81, said ‘I do’ to ophthalmologist Dana Blumberg, 47, on Friday night at what guests were told was a ‘Kickoff and a Touchdown Party’.

Tom Brady, former Patriots quarterback, turned up without his wife Gisele Bundchen, amid rumors of an impending divorce.

Blumberg donned an ivory Naeem Khan wedding dress for the ceremony. According to Page Six, she arrived incognito at the venut in an Elie Saab jump suit.

Kraft meanwhile could be seen in his usual blue sport jacket and his RKK Air Force 1 sneakers. For the dinner, Kraft changed his outerwear to an Armani dinner blazer.

Blumberg donned an ivory Naeem Khan wedding dress for the ceremony. According to Page Six, she arrived incognito at the venut in an Elie Saab jump suit 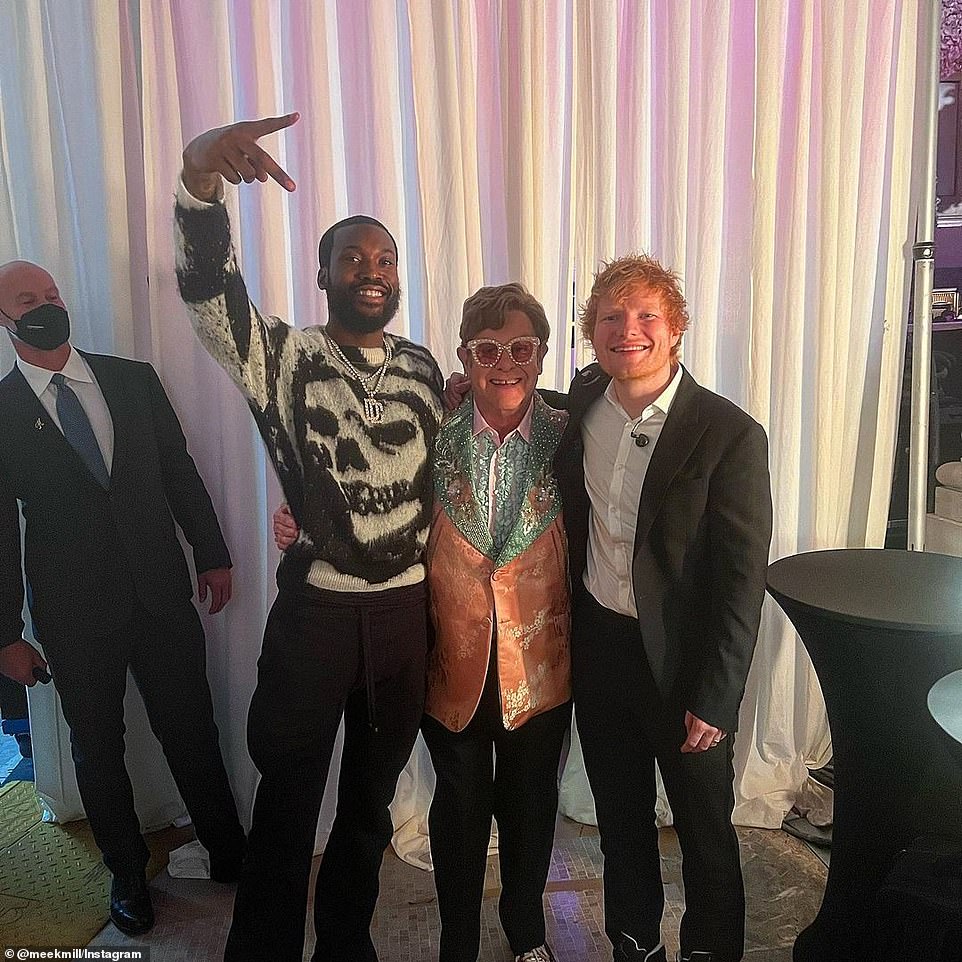 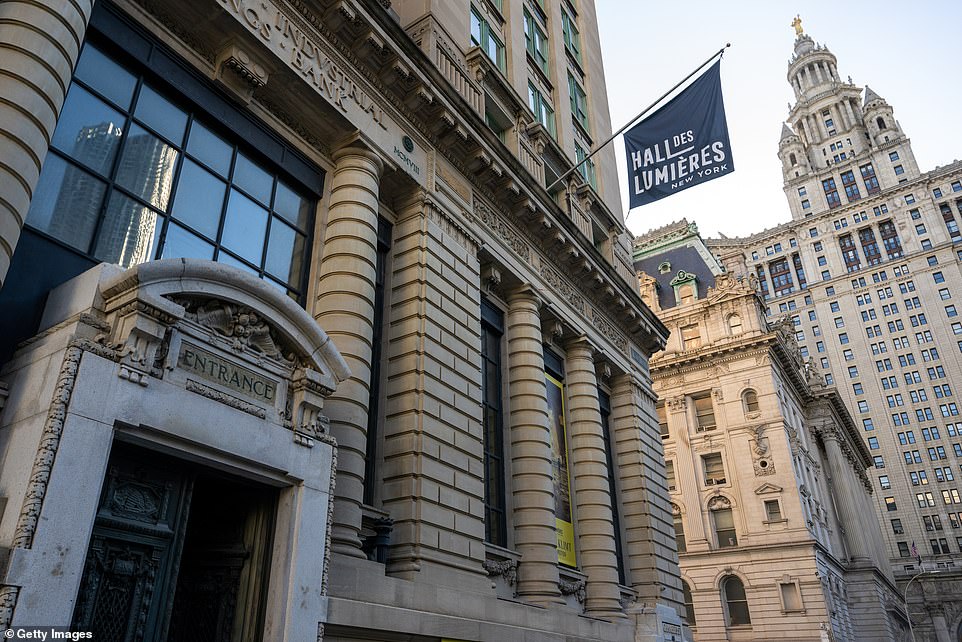 The couple hired out the Hall des Lumieres in lower Manhattan for the party, with guests unaware it was to be a wedding 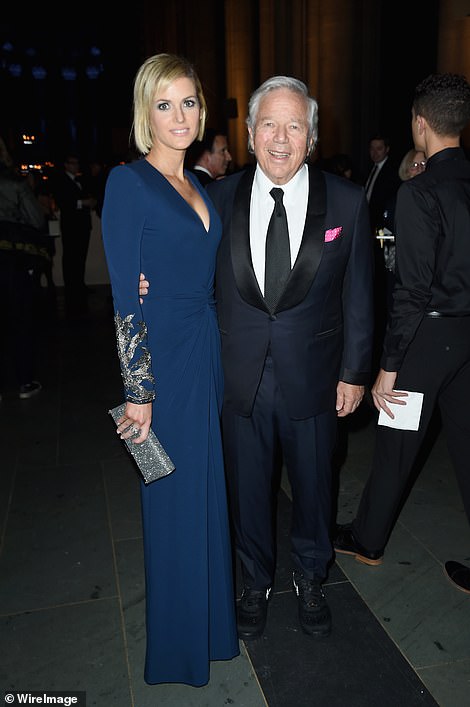 Robert Kraft, 81, and his girlfriend Dana Blumberg, 47, wed on Friday night in Manhattan

Sources told The Post that guests were shown a 10-minute video of the couple, before they were introduced to the crowd by the voice of NFL commentator Al Michaels as husband and wife.

The pair had coordinated especially with Elton John, after he volunteered in July to sing at their wedding. They gave him three weeks notice, and he found a spare date.

The Rocketman kicked off his hour-long performance with ‘Circle of Life,’ followed by ‘Tiny Dancer,’ ‘Philadelphia Freedom,’ ‘Don’t Let the Sun Go Down on Me,’ ‘Can You Feel the Love Tonight,’ and more, the Post reported.

He also performed ‘Candle in the Wind’, as a duet with Ed Sheeran.

Kraft and Blumberg had a first dance as Sheeran played an acoustic number. 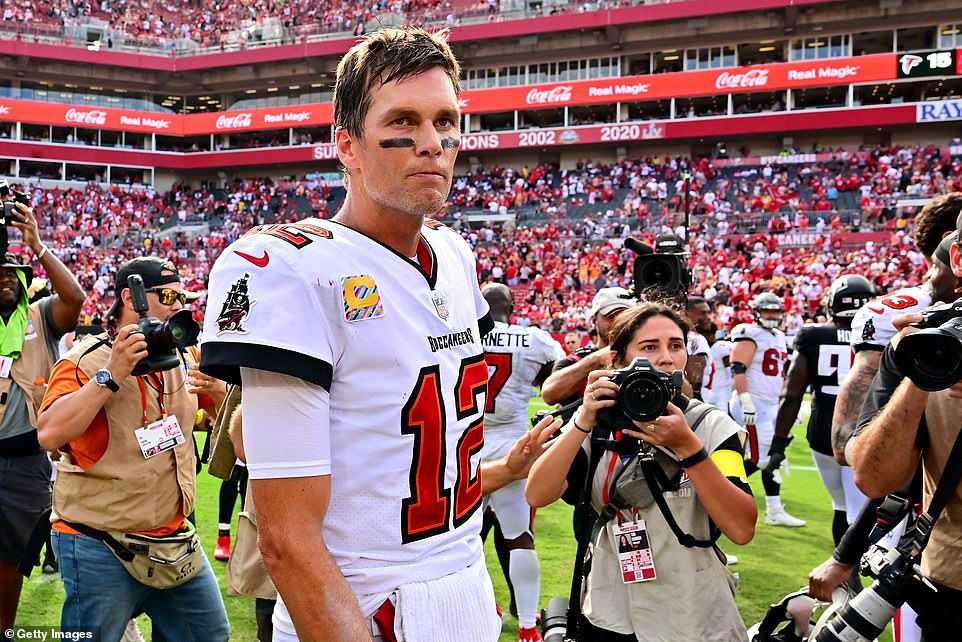 Tom Brady, who won the Super Bowl with Kraft’s team, arrived at the wedding solo amid rumors of a divorce from his wife Gisele Bundchen. Brady is pictured on October 9 playing for his current team, Tampa Bay Buccaneers

Rapper Meek Mill performed, and then Grandmaster Flash took to the turntables and DJ’d.

‘They wanted to get in a zone of sharing happiness with one another, and bringing people together,’ a friend of the couple told the paper.

Kraft was previously married to his college sweetheart and philanthropist Myra Kraft.

She died in 2011 from ovarian cancer at the age of 68 in her home in Brookline, Massachusetts. Following her death, the Patriots players wore patches with her initials, MHK, on their jerseys throughout the following season.

Just before his wedding, Kraft donated $50 million to Massachusetts General Hospital, the largest donation the medical facility has ever received.

He told WCVB in an interview that he has been interested in medical affordability since his wife’s death.

Kraft said: ‘When my beloved Myra got sick about 12 years ago, I saw the great care she got. We have the greatest hospitals in the world right here in Massachusetts.’

The billionaire added: ‘But then I started thinking, what if I was someone of modest means or a person of color, did I have the same access? Diversity equity, inclusion, that’s a big area today that isn’t being serviced properly.’

Myra served as the president of the New England Patriots Charitable Foundation. She married Kraft in 1963, just before her senior year at Brandeis University, where she graduated with a history degree.

The couple had four children together, Jonathan, Daniel, Joshua and David. 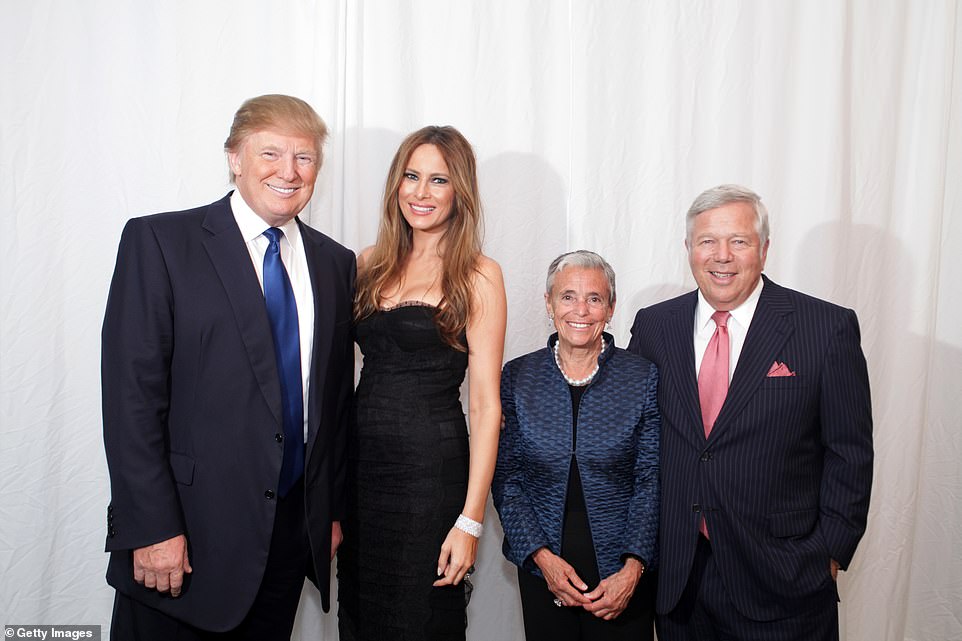 In one of his first interviews since Myra’s death, Kraft told Boston.com: ‘I sort of feel robbed. I try to stay very busy, I basically work seven days a week. I try to do new things, to meet new people.’

He refused at the time to comment on his then-girlfriend, Ricki Noel Lander, then 32. The Boston.com piece mentions that many close to Kraft credited Lander with bringing him out of depression following his wife’s death.

Jonathan Kraft told the website: ‘You hear about couples married for 50 years, whose lives were totally intertwined, and when one loses their partner, the other doesn’t want to live.’

While ex-president Donald Trump said: ‘They had an amazing marriage, and Bob was devastated when she died. He suffered greatly for a year, and he still suffers. But at some point, life has to go on, and it’s going on for Bob.’

Nancy Pelosi, 82, STEPS DOWN as leader of the Democrats after 29 years

Michelle Obama’s brother and his wife sue their children’s school for ‘racial and economic...