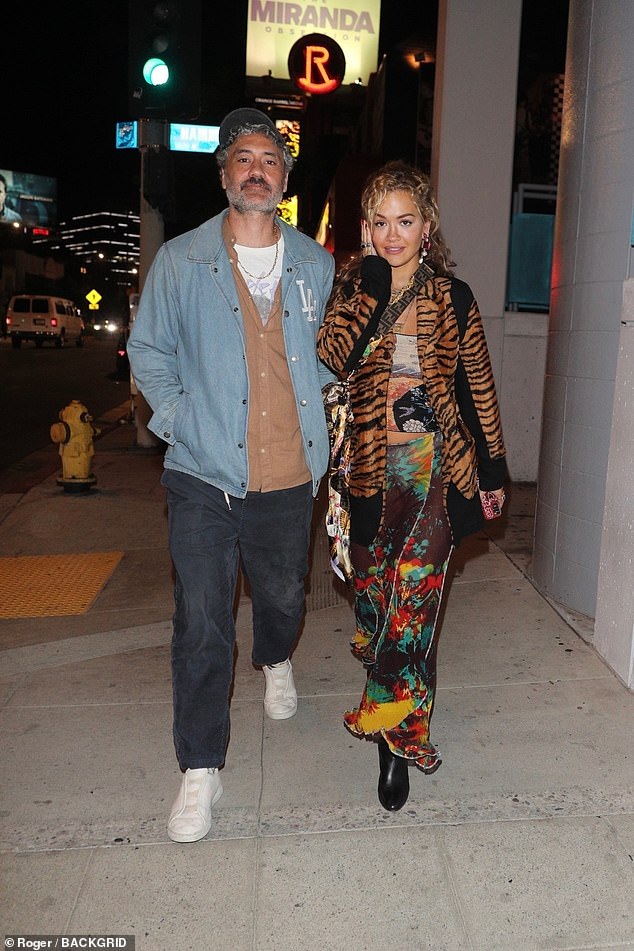 Rita Ora, 31, shows off her eclectic style credentials in quirky ensemble as she goes on date night with boyfriend Taika Waititi, 46

By Milly Veitch For Mailonline

Rita Ora showed off her unique sense of style on Sunday as she went on a date night with boyfriend Taika Waititi.

The longtime couple, 31 and 46, were attached at the hip as they left The Roxy in West Hollywood.

Rita put her quirky sense of fashion on full display in a long printed maxi skirt and clashing printed crop top that showed a flash of her toned midriff.

Stylish: Rita Ora showed off her unique sense of style on Sunday as she went on a date night with boyfriend Taika Waititi

The singer kept the cold at bay by wrapping up in a tiger print jacket, and toted her essentials in a designer bag slung across her chest.

Her blonde tresses were styled in neat curls and she sported minimal makeup to let her natural beauty shine through.

Taika showed off his fashion sense in a graphic T-shirt, brown shirt and black jeans with white trainers.

He layered up with a pale blue jacket and wore a baseball cap on top of his salt and pepper streaked hair. 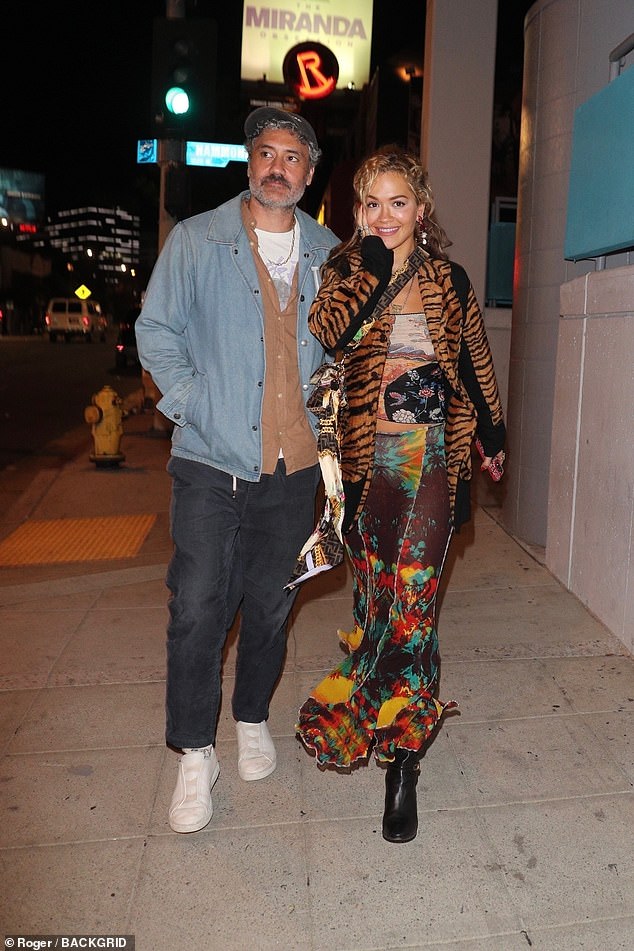 Loved-up: The longtime couple, 31 and 46, were attached at the hip as they left The Roxy in West Hollywood

The twosome met four years ago and were friends before their relationship turned romantic one year ago.

Last year the media personality revealed to The Independent that she froze her eggs in hopes of building a family in the future.

She told the publication she would ‘love to have a nice, big family,’ and also gushed over her romance with Taika, saying she ‘wasn’t expecting to find love’ with him.

She added that she is keen to keep her relationship out of the spotlight and ‘protect it,’ before saying she has changed the way she dates in the public eye now. 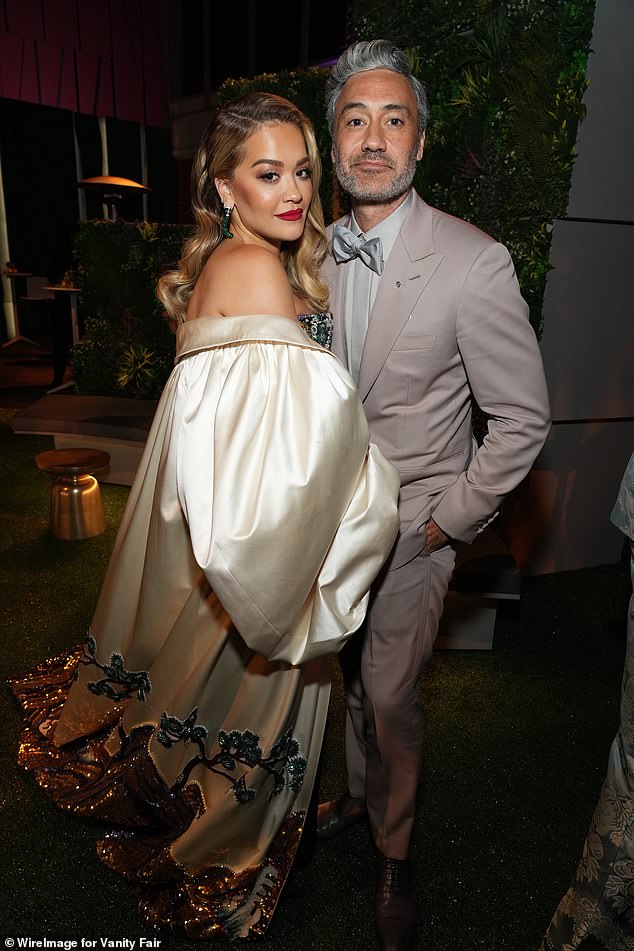 Friends to lovers: The twosome met four years ago and were friends before their relationship turned romantic one year ago; seen at the 2022 Vanity Fair Oscar Party

‘I think protecting something that you really care about, you’ve got to have a sense of privacy a little bit. I wouldn’t have known that if I didn’t go through what I went through in the past,’ she said.

When asked to elaborate, Rita said she used to be ‘so trusting and sometimes oversharing.’

For Valentine’s Day this year the two both took to social media to share their love for one another.

‘First photo the night we met four years ago,’ the New Zealand-born entertainer wrote alongside a throwback snap of the pair.

‘We’ve been mates ever since. Then a year ago we decided to “complicate” things but it just got easier,’ he added.

‘Us. 4 years ago. To now. thanks for being cool. And entertaining me forevs..Happy Valentine’s Day bestie’ Ora wrote in her own tribute. 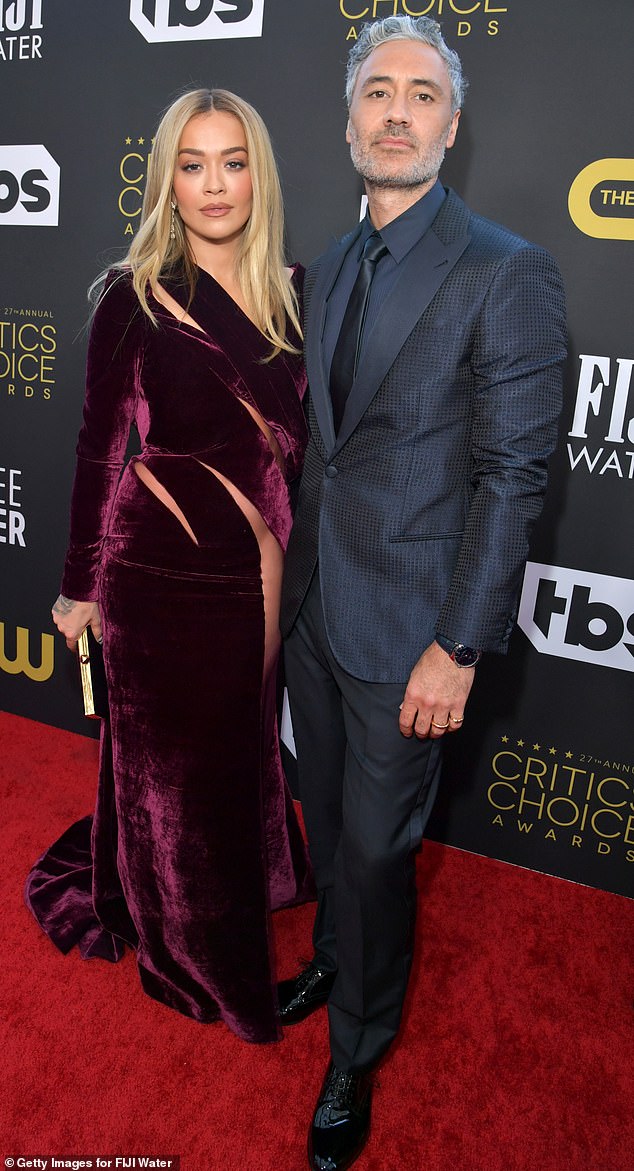 First snow warning hits Scotland as Britain braces itself for for icy conditions next...

Karrueche Tran parades her physique in a fishnet bodysuit at GQ’s Man of the...

Neighbour is ‘forced to rebuild garden wall’ due to out of control vines on...