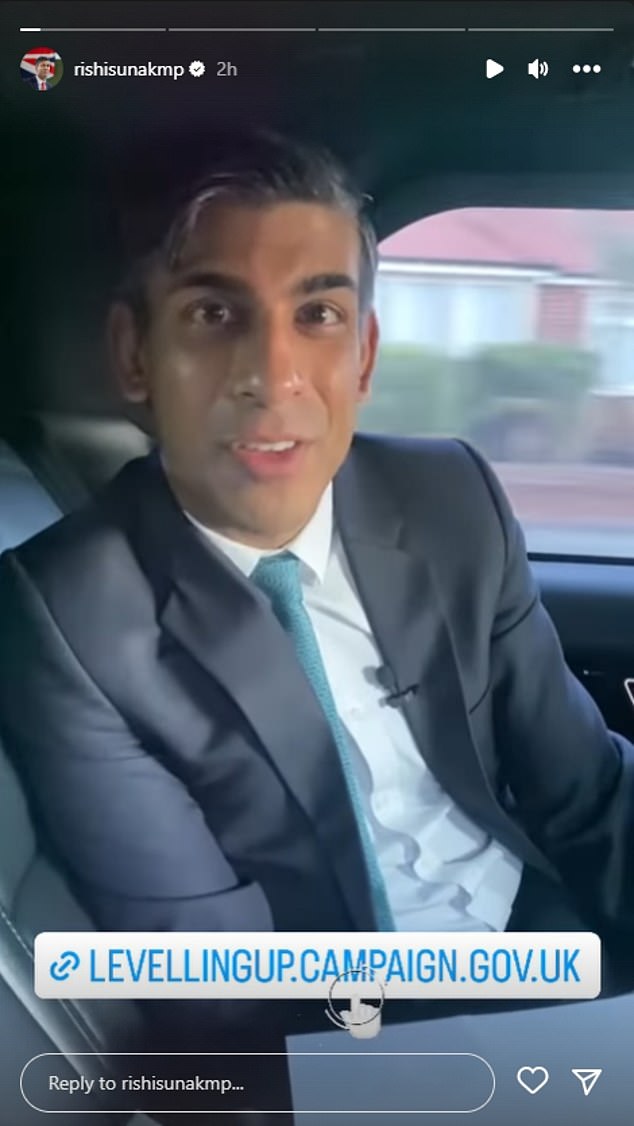 Rishi Sunak is facing a police probe today after admitting failing to wear a seatbelt while recording a video in his official car.

The PM apologised and acknowledged an ‘error of judgment’ after a now-removed Instagram clip showed him in the back seat of the vehicle with no restraint.

Lancashire Police have said they are ‘looking into’ the issue. Not wearing a seatbelt can be punished with a fine of up to £500 – although a £100 fixed penalty notice is more common.

The Tory MP for Blackpool South, Scot Benton, has urged the force not to use their resources investigating ‘politically motivated’ claims about seatbelt use.

Downing Street repeated the apology from the premier today, saying: ‘It was a mistake and he’s apologised and thinks it’s important to do so as people should wear their seatbelt.’

The spokesman said he was not going to get ahead of any process, and was ‘not aware’ Mr Sunak had spoken to officers.

Asked if the police would be wasting their time looking into the issue, No10 said: ‘It’s entirely a matter for the police where they allocate resources.’

The PM has yet to make any comment in person.

The embarrassing developments – nine months after Mr Sunak received a penalty alongside Boris Johnson for breaching Covid rules – capped a miserable day for the premier.

He faced a backlash for taking a plane to Blackpool for a visit to promote ‘Levelling Up’ projects, during which he suggested Tories calling for immediate tax cuts were ‘idiots’.

The spending announcements were also criticised for mostly going to London and the South East rather than the Red Wall.

Rishi Sunak used the social media clip to promote his ‘Levelling Up’ tour. But viewers quickly spotted that the PM appeared not to be wearing a safety belt

A spokeswoman for Lancashire Police said: ‘We are aware of the matter and we will be looking into it.’

A Downing Street spokesman said Mr Sunak ‘fully accepts this was a mistake and apologises’.

‘The Prime Minister believes everyone should wear a seatbelt,’ the spokesman said.

‘It was an error of judgment, he removed it for a short period of time to film a clip, which you’ve seen, but he accepts that was a mistake.’

Mr Sunak was asked about failing to wear his seatbelt as he walked off from a broadcast interview, but did not answer.

There are a few exemptions to the seatbelt rules, including when a car is being used for police, fire and rescue services and for certified medical issues.

But Downing Street does not believe there is an exception for travelling in a ministerial car.

Posting on Twitter this morning, Mr Benton said Lancashire Police should be spending their time ‘investigating serious crime which impacts on my constituents’.

‘The vast majority of people would think that politically motivated complaints about about a seat belt are not good use of frontline resources,’ he added.

In the video, police motorbikes can be seen escorting the car as Mr Sunak addresses the camera.

The Government has considered toughening seatbelt rules to ensure drivers not wearing them could receive penalty points.

Recent Department for Transport figures suggested around 30 per cent of people killed in cars on Britain’s roads in 2021 were unrestrained.

Mr Sunak flew to Blackpool yesterday morning before visiting Accrington and Morecambe, although it is unclear at what point in his journey he filmed the social media clip.

At one point in his Instagram video, police outriders on motorbikes can be seen through Mr Sunak’s passenger window.

The PM used the clip to encourage users to follow his progress on his trip to northern England as he went ‘out and about seeing Levelling Up in action’.

On his visit to Morecambe, Mr Sunak defied Tory calls for tax cuts in the Budget, suggesting only idiots think the burden can fall quickly after Covid and the Ukraine war. 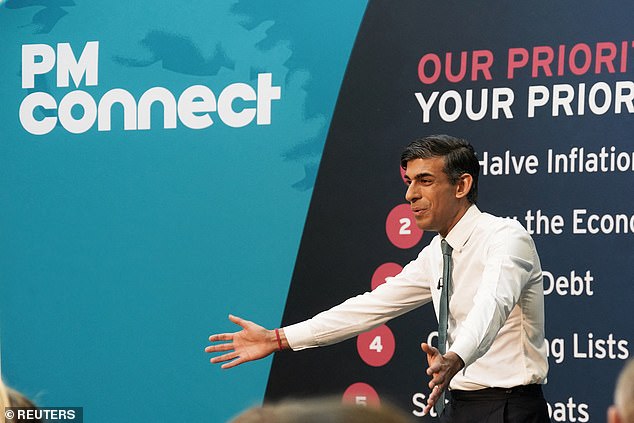 The PM gave a blunt response when he was quizzed on the potential for reductions soon – and also swiped at James Dyson after the billionaire launched a brutal attack on the government’s ‘short-sighted’ and ‘stupid’ policies.

Asked on a visit to Morecambe whether he will cut taxes, Mr Sunak said: ‘I’m a Conservative, I want to cut your taxes … I wish I could do that tomorrow, quite frankly, but the reason we can’t is because of all the reasons you know.

He said the pandemic and the war in Ukraine had left the public finances ‘not where it needs to be’.

Mr Sunak said ‘it takes a bit of work to get there’ but he vowed to make the economy stronger so the NHS and schools can be funded, secure lower interest rates and get a ‘grip of’ inflation.

Mr Sunak also pointed to the ‘super-deduction’ – which allows companies to invest large sums tax-free – saying he would like to hear from Sir James whether any other country was offering anything similar.

Mr Sunak and Chancellor Jeremy Hunt have been scrambling to bring in revenue since the Downing Street handover last October, insisting their priority is to stabilise the government finances in the wake of the disastrous Liz Truss meltdown.

However, there is disquiet on Conservative benches there seems to be no prospect of tax cuts at the Budget in March.

MailOnline understands there is instead a Cabinet push for Mr Hunt to ease the eye-watering burden on Brits by the Autumn, with fears it could be the only ‘narrow path’ to the Tories winning the next election.

Asked whether Mr Sunak viewed people who wanted tax cuts as ‘idiots’, a Downing Street spokesman said: ‘He didn’t call anybody an idiot and he himself set out his ambitions to reduce the tax burden over time.

‘He said that the worst thing he could do is make promises he can’t keep and saddle a country with more debt.

‘And he set out once again that his overall ambition is to reduce tax. But that needs to be when we have when we have economic stability and inflation’s come down.’ 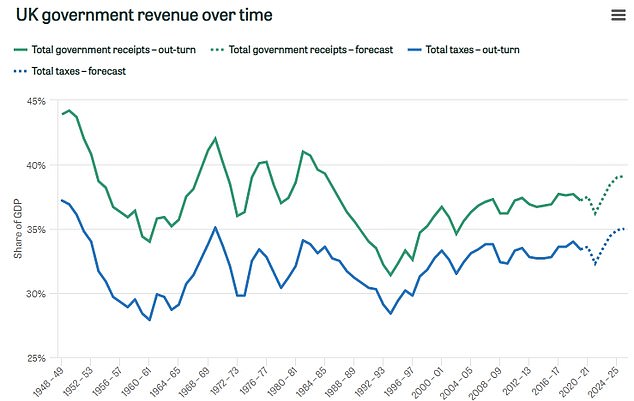 The tax burden has risen sharply in recent years, causing alarm among Tories

Strictly’s Helen Skelton enjoys a boozy evening with Ellie Taylor after arriving at her...

Biden tears into Republicans, vowing to give them ‘hell’ in midterms

Are Dr Chris Brown and Sarah Harris headed for The Project?