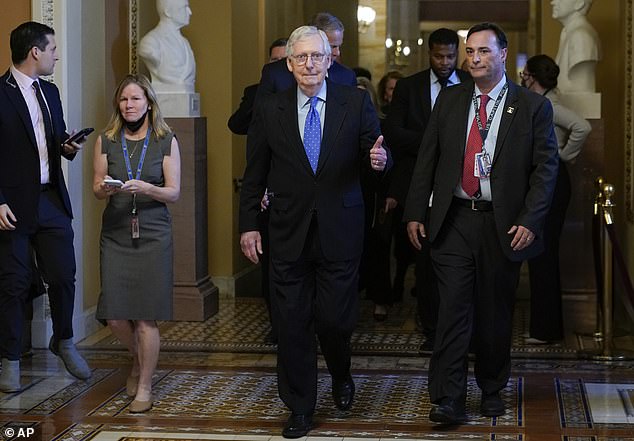 BREAKING NEWS – Republicans re-elect Mitch McConnell as their Senate leader: Defeats challenge from Rick Scott and amid criticism of the GOP’s underwhelming midterms

Senator Mitch McConnell fended off a challenge from Florida Sen. Rick Scott to hold on to his position as GOP leader on Wednesday.

The GOP side of the Senate spent nearly four hours on one of its first full days back on Capitol Hill in nearly two  months in a closed-door popularity contest of sorts, debating who should run the caucus after a lackluster showing at the midterms led to intra-party turmoil.

In a secret ballot election, McConnell, R-Ky.,  garnered 37 votes to Scott’s 10, with one senator abstaining, according to Sen. Ted Cruz.

McConnell gave a thumbs up as he walked through the Capitol after securing his victory.

A separate vote on a motion to delay the leadership vote until after the Georgia Senate run-off election on December 6 also failed 16-32.

The minority leader had faced calls for new leadership after the GOP failed to cinch a majority in midterm elections, but Scott, R-Fla., had a hand in that performance too as chair of the GOP’s Senate campaign arm.

‘If you want to simply stick with the status quo, don’t vote for me,’ Scott had written in a letter to senators.

‘I do think there was a lot of expression in room that the Republican conference and Republican leadership needs to be more vigorous and more effective at fighting policies that are hurting the American people,’ Cruz told reporters after the vote. The Texas Republican had lashed out at GOP leadership shortly after Republicans lost the Senate, 50-49 with one race outstanding in the Georgia runoff.

‘Fifty is better than 49 and we’re going to give it everything we’ve got,’ McConnell said of that race.

The 80-year-old lawmaker was first elected to Senate in 1985 and has served as GOP leader since 2007. ‘I’m not going anywhere,’ McConnell told reporters when asked if he would step aside after he surpassed late Sen. Mike Mansfield, D-Mont., for longest serving party leader in history.

Senators are now off to vote on a gay marriage bill that has already passed the House.

Mitch McConnell fended off a challenge from Florida Sen. Rick Scott to hold on to his position as GOP leader on Wednesday. He is pictured at the Capitol on Wednesday 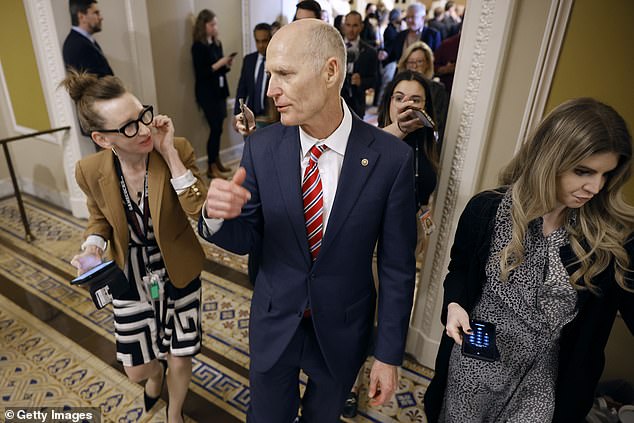 After the election McConnell said that the GOP base turned out for Republican candidates but we have a problem with people in the middle who… determine the outcome.’

In the middle of the GOP leadership vote, Sen. Majority Leader Chuck Schumer, D-N.Y., walked by reporters and gloated that his and McConnell’s message on MAGA Republicans was ‘remarkably similar.’

Schumer had on Tuesday called on ‘non-MAGA Republicans’ to ditch Trump and work with him on bipartisan legislation.

Asked to respond to former President Trump’s announcement that he is running for president for a third time, McConnell said: ‘I don’t have a dog in that fight.’

McConnell on Tuesday criticized the quality of Republican candidates after Democrats took back control with Senator Catherine Cortez Masto’s win in Nevada.

He also said he never predicted the ‘red wave’ that so many others in his party had expected.

McConnell claimed many voters felt that Republicans ‘were not dealing with issues in a responsible way and we were spending too much time on negativity and attacks and chaos.

‘They were frightened and so they pulled back,’ he added.

The weight of Trump’s influence was apparent in a number of races. In Pennsylvania, Trump-backed Dr. Oz lost to Democrat Lt. Gov. John Fetterman. Trump had gotten Oz to victory in the primary, despite Pennsylvanians complaining that he didn’t come from their state or represent their values.

In Georgia, Trump-backed Herschel Walker underperformed Republican Gov. Brian Kemp and GOP Sec. of State Brad Raffensperger, though the race will go to a runoff between Walker and Democratic incumbent Raphael Warnock.

Royal income has taken an £14m hit after Covid pandemic while expenditure has risen...

Infamous Japanese cannibal who raped, killed and ate a Dutch woman but was never...

Keeping up with yummy mummies destroyed me

Doctors left shocked after clinical trial for cancer drug cures the disease in every...