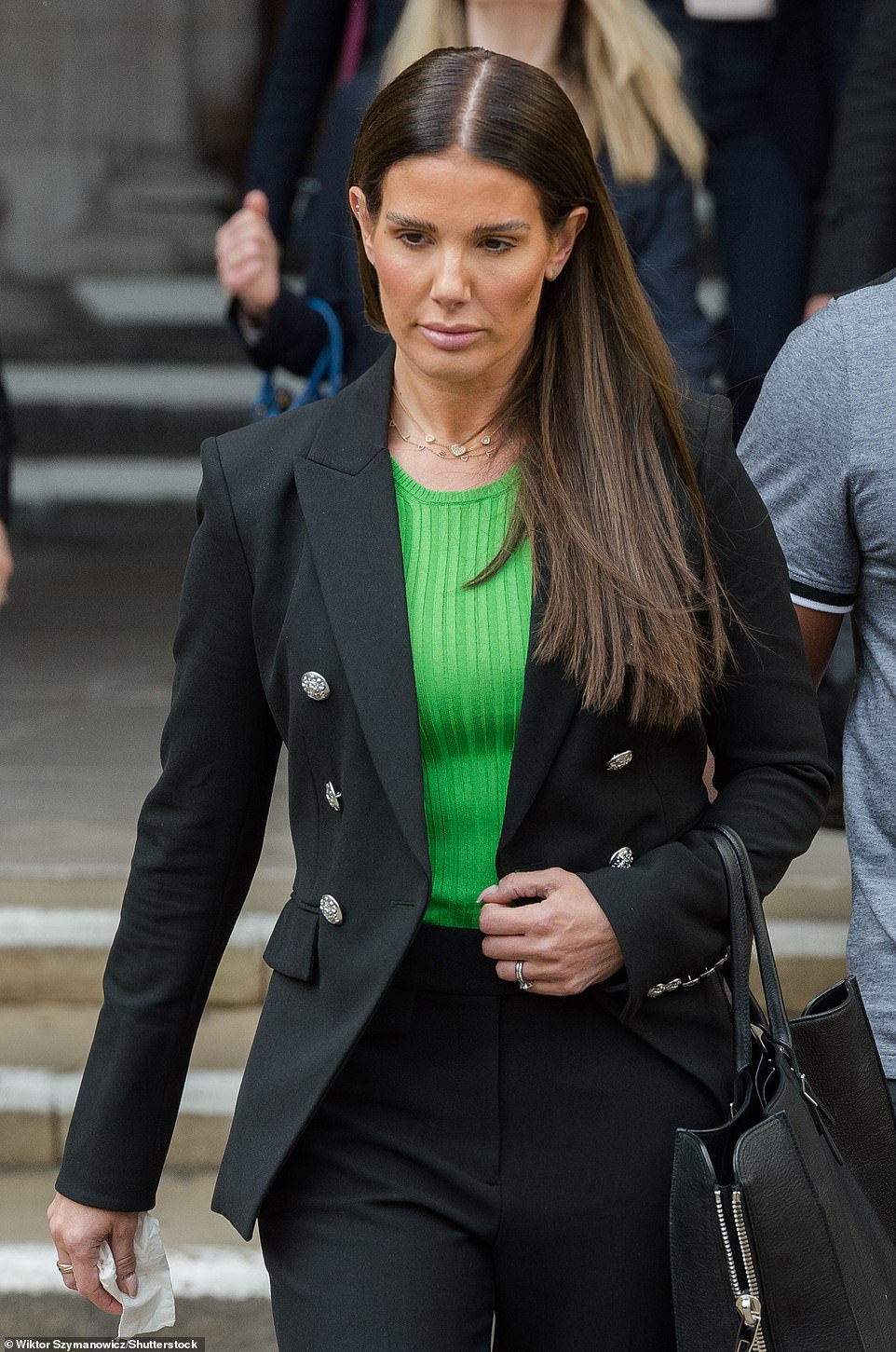 Rebekah Vardy has sensationally claimed she was ‘framed’ during the Wagatha Christie affair, months after losing the high-profile court battle.

Mrs Vardy took Coleen Rooney to court for libel – and lost – after Mrs Rooney claimed in October 2019 that Mrs Vardy’s social media account was leaking stories about her to the Press.

In an interview for a new documentary, which will examine both sides of the bitter court clash, she says: ‘I wonder, how easy would it be to potentially set someone up in a way that makes it look like that is the only person that has seen those [leaked Instagram] posts?’

She added: ‘I just find it absolutely incredible to this day that she said no one else knew about this.’

During the High Court trial, Mrs Justice Steyn said in her judgment in July that it was ‘likely’ that Mrs Vardy’s agent Caroline Watt ‘undertook the direct act’ of passing on information to The Sun.

The judge said: ‘The evidence clearly shows in my view that Mrs Vardy knew of and condoned this behaviour, actively engaging in it.’

Mrs Vardy, 40, was ordered to pay up to £1.5million towards Mrs Rooney’s legal fees after losing the case.

But the wife of Leicester and England footballer Jamie continues to insist she was not the culprit. And in the new documentary series, Vardy vs Rooney: The Wagatha Trial, which will be streaming on Discovery+ from Saturday, Mrs Vardy also claims that a mole is still leaking Rooney stories to The Sun – which she also says proves her innocence. 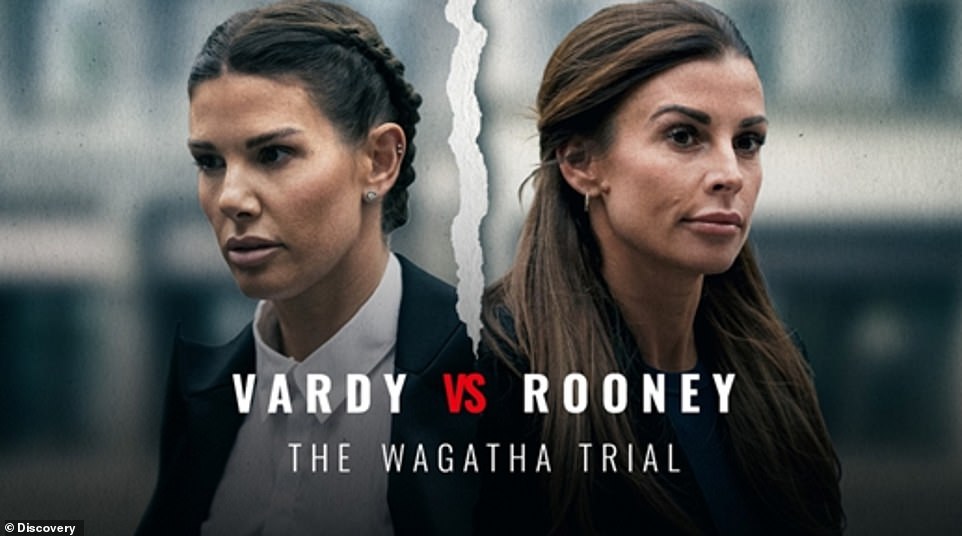 Rebekah Vardy, (right), prepares to stick the boot in again as she gives her side of the story about the Wagatha trial for new docu-series 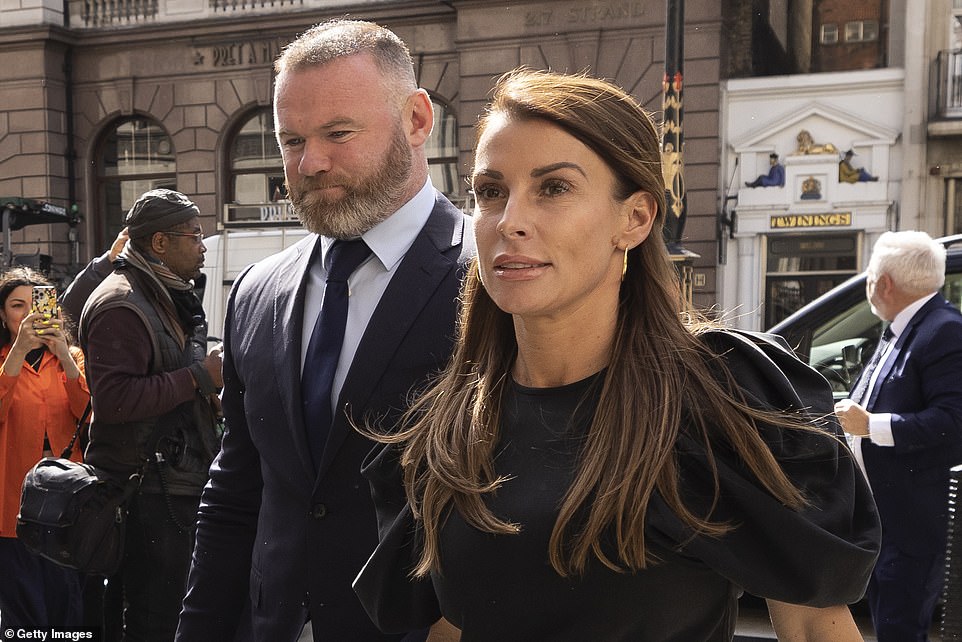 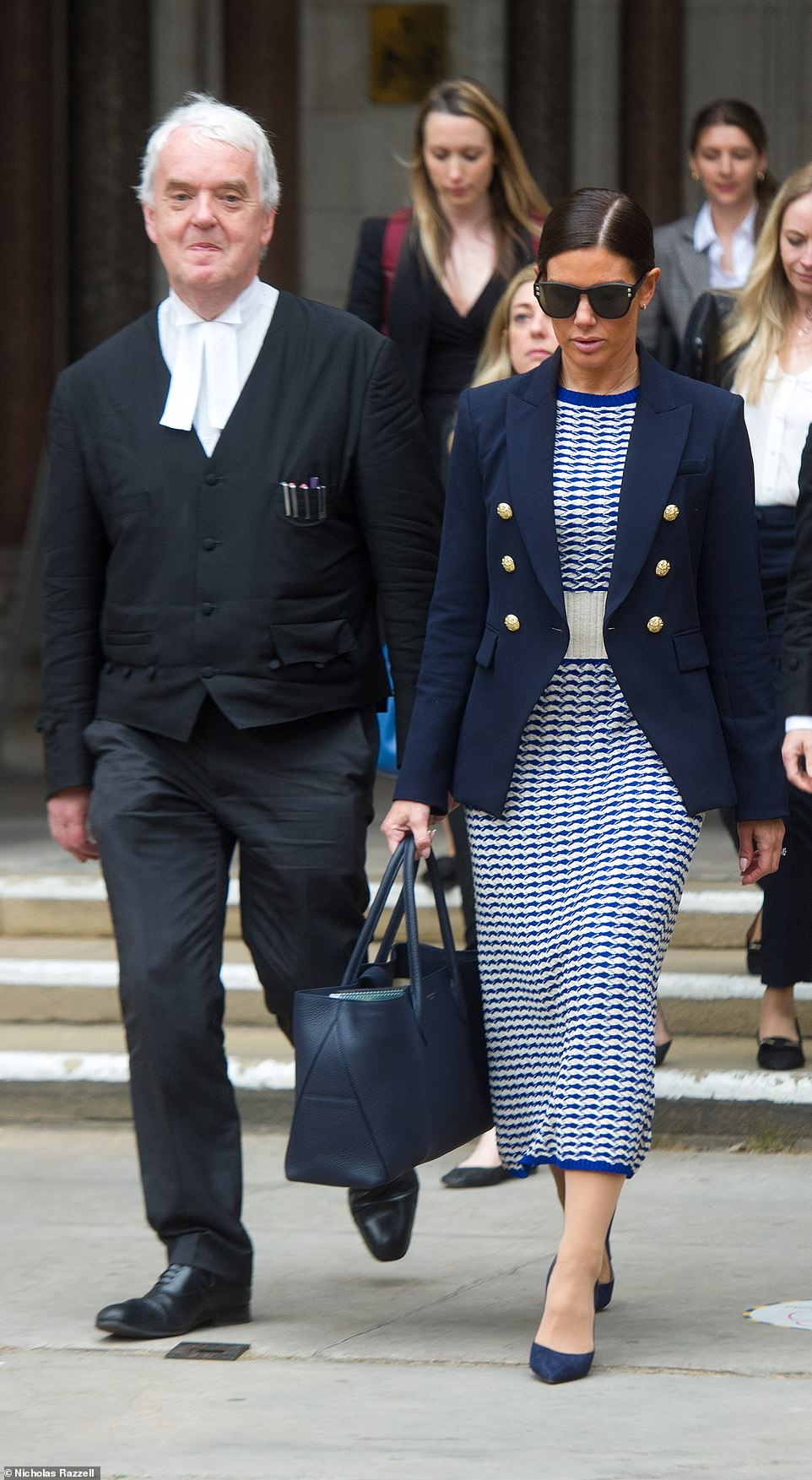 Rebekah Vardy is pictured with her barrister Hugh Tomlinson, KC

‘The irony is that since I was removed as a follower, stories have been coming thick and fast about the Rooney’s,’ she said.

A friend of Mrs Vardy said a story in The Sun earlier this year, suggesting that Wayne Rooney would have a ‘chaperone’ when he was away from Mrs Rooney, 36, working in the US, sparked Mrs Vardy’s suspicions.

Mother-of-five Mrs Vardy is on pugnacious form in the documentary, giving an interview dressed head-to-toe in black leather.

At one point she snaps: ‘I have zero tolerance for this bull****,’ and adds: ‘I just find the whole thing really ****ing bizarre.’

She was on holiday in Dubai with her husband when Mrs Rooney made the accusations on Twitter and Instagram about the leaks. Mrs Vardy said: ‘At the time I felt physically sick. I think it must have been the biggest panic attack. I was totally shocked. What to do next? That’s the million-dollar question.

She said being in court was a ‘surreal’ experience. And, referring to a fake story about a flooded basement in Mrs Rooney’s new Cheshire mansion – which Mrs Rooney posted herself and used to link the leaks to Mrs Vardy’s account – she said: ‘The first time I read about the flooded basement was in the Daily Mail online. I love how I get blamed for that one, incredible.

‘If I had been selling stories, where are the messages saying ‘give this to The Sun’? ‘Make sure I get paid for this’. Where are they? There aren’t any – because they don’t exist.’

Mrs Vardy said Mrs Rooney’s legal team must have been ‘desperate’ to bring up her kiss-and-tell story about Peter Andre.

Mrs Vardy’s friends including fellow WAG Nicola McLean insist she was treated ‘appallingly’ by her rival’s barrister – in a High Court case branded the most calamitous libel claim in history. 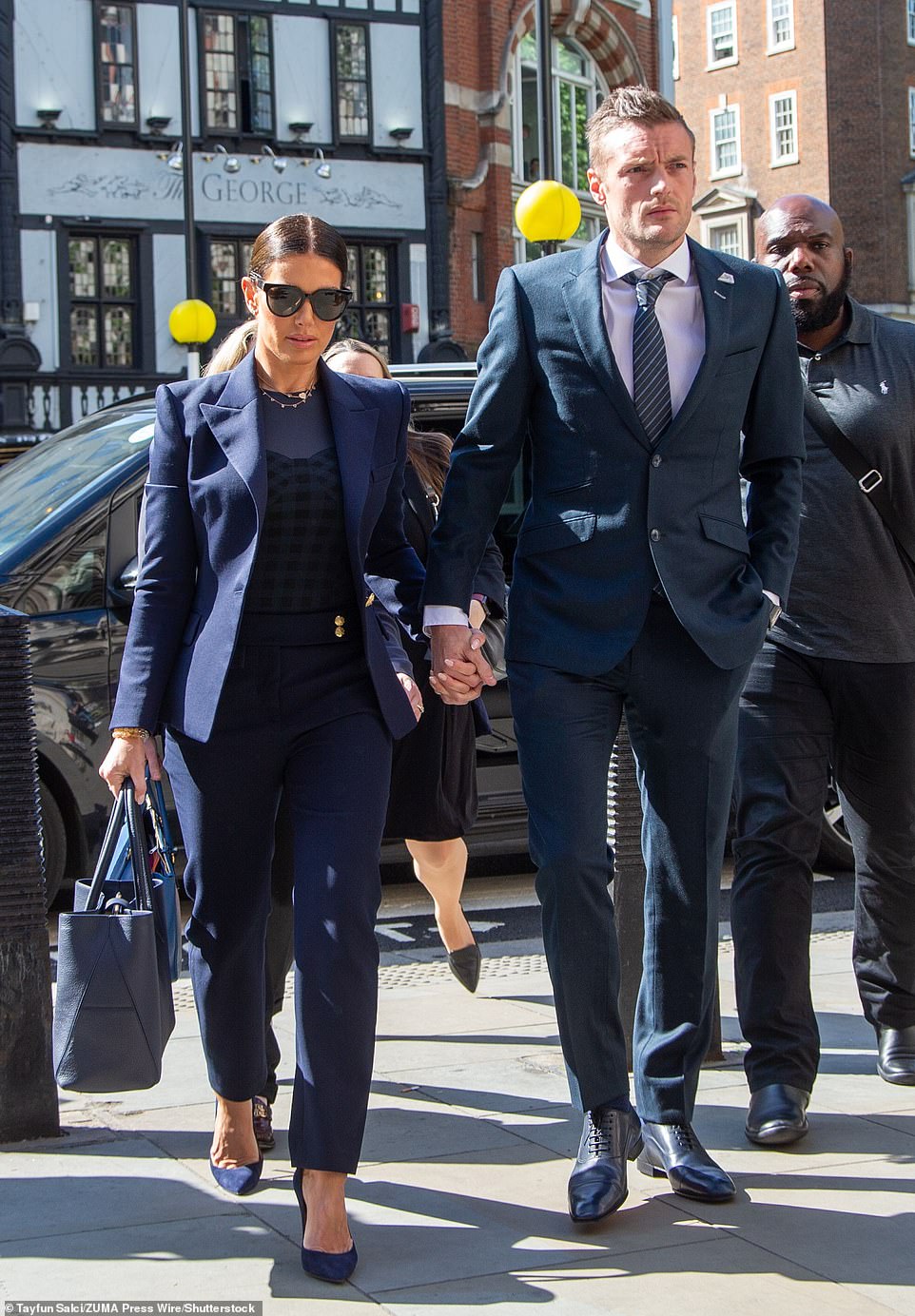 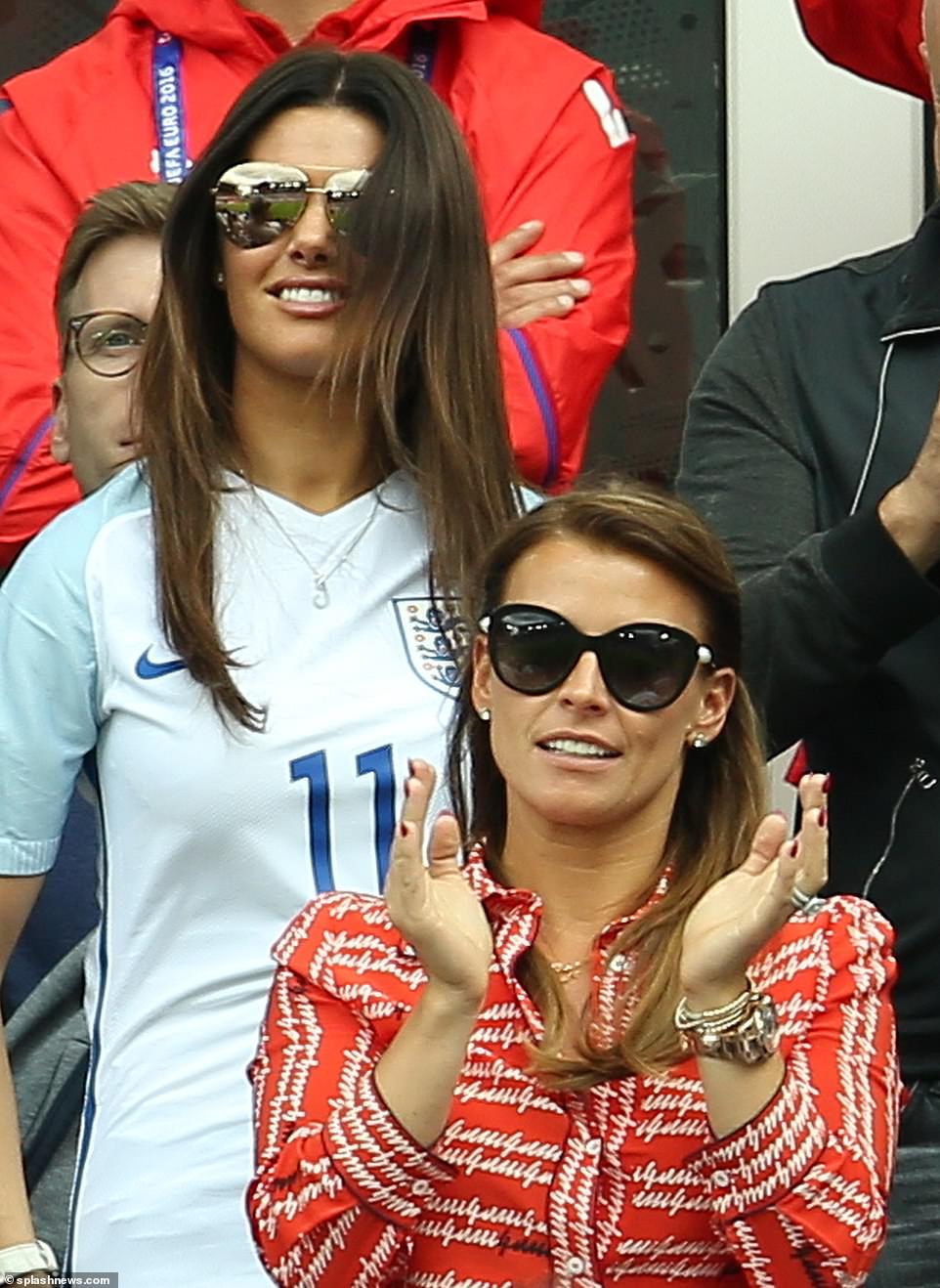 Rebekah Vardy was outed by fellow footballer’s wife, Coleen Rooney, as the serial leaker of private stories with the infamous ‘It’s……. Rebekah Vardy’s account’ post (pictured together at Euro 2016) 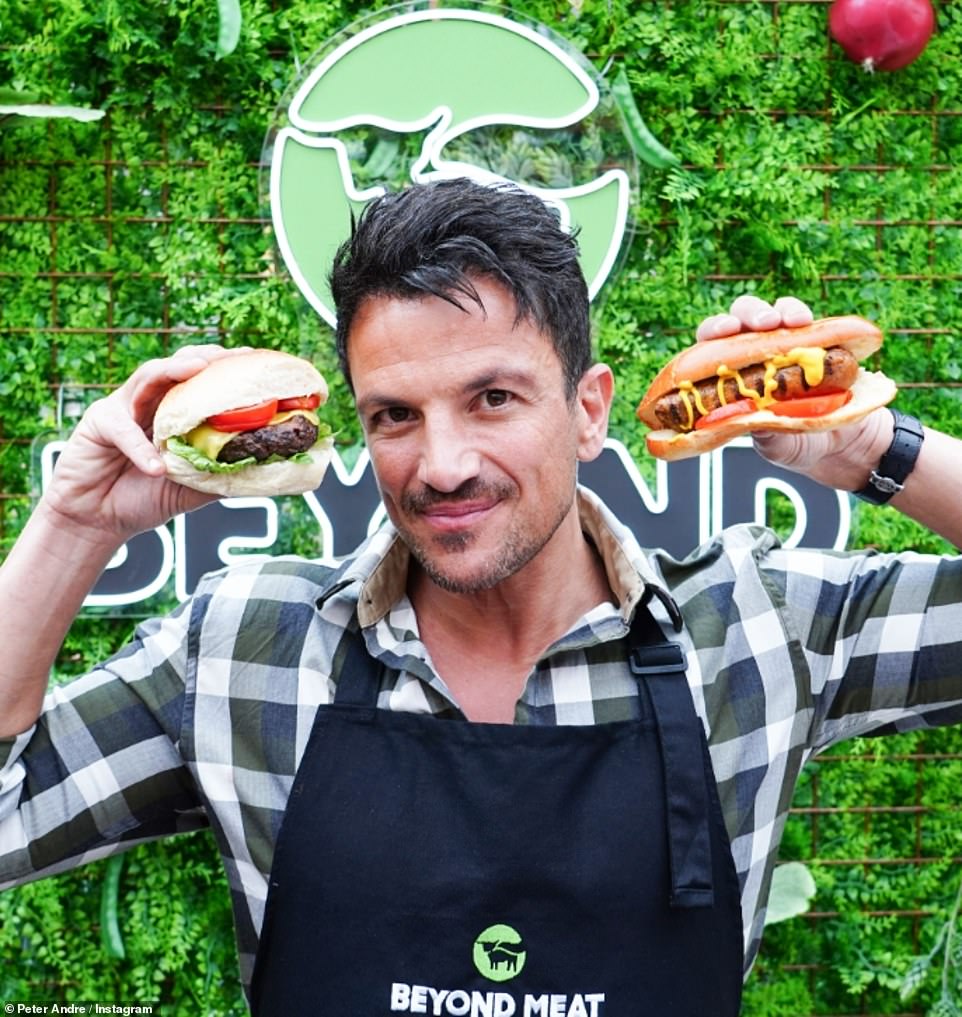 Early in the trial Mrs Rooney’s Barrister David Sherborne asked Mrs Vardy questions about an interview she gave to the News Of The World, in which she reportedly detailed an alleged sexual encounter with singer Peter Andre. Mr Sherborne showed an A3 print out of the story to Mrs Vardy reading the headline: ‘Peter’s hung like a small chipolata, shaved, slobbery, lasts five minutes.’

Following an alleged one night stand in 2001, Rebekah sold her story to the tabloid, in which she was quoted saying: ‘When he pulled down his ­trousers I couldn’t believe it. It was like a ­miniature chipolata.’

When confronted about her crass comments in court, Rebekah claimed that she had been ‘misrepresented’ in the story and said she had been coerced to do the interview by an abusive ex-partner.

Vardy also repeats the claim that she does not recall seeing a text message from Mrs Watt in which the agent, discussing selling stories about Mrs Rooney, said: ‘It was me.’

The High Court imposed a punitive charge over legal costs, with Mrs Vardy told to pay 90 per cent of Mrs Rooney’s costs.

This was in part because crucial evidence had been destroyed after Mrs Watt accidentally dropped her phone in the North Sea.

The documentary features a text exchange between Mrs Vardy and Mrs Rooney which took place in the minutes after Mrs Rooney made her first accusation against Mrs Vardy online. Mrs Vardy asks: ‘Wtf is this?’ and Mrs Rooney says: ‘You know what it is.’ Mrs Vardy then says: ‘I have NEVER ever given anything to anyone on you’, to which Mrs Rooney responds: ‘It’s your Instagram.’ Mrs Vardy says: ‘I’m so disappointed you think I would do that. I’m seven months pregnant and you try and cause s*** for me.’

A friend of Mrs Rooney said yesterday: ‘The court ruling was absolutely clear about the facts of this case and also about the nature of the evidence Mrs Vardy gave.’

September 2017 to October 2019 – The Sun runs a number of fake articles about Coleen, which she claimed she only shared with Vardy in a ‘sting’ operation, including that she travelled to Mexico to look into baby ‘gender selection’ treatment, her plan to revive her TV career and the flooding of her basement.

October 9, 2019 – Coleen uses social media to accuse Rebekah of selling stories from her private Instagram account to the tabloids. It prompts #WagathaChristie to start trending.

February 13, 2020 – In a tearful appearance on ITV’s Loose Women, Rebekah says the stress of the dispute caused her to have severe anxiety attacks and she ‘ended up in hospital three times’.

June 23, 2020 – It emerges that Rebekah has launched libel proceedings against Coleen.

November 19-20, 2020 – The libel battle has its first High Court hearing in London. A judge rules that Coleen’s October 2019 post ‘clearly identified’ Rebekah as being ‘guilty of the serious and consistent breach of trust’.

Mr Justice Warby concludes that the ‘natural and ordinary’ meaning of the posts was that Rebekah had ‘regularly and frequently abused her status as a trusted follower of Coleen’s personal Instagram account by secretly informing The Sun of Coleen’s private posts and stories’.

February 8-9, 2022 – A series of explosive messages between Rebekah and her agent Caroline Watt – which Coleen’s lawyers allege were about her – are revealed at a preliminary court hearing.

February 14 – Coleen is refused permission to bring a High Court claim against Ms Watt for misuse of private information to be heard alongside the libel battle. A High Court judge, Mrs Justice Steyn, says the bid was brought too late and previous opportunities to make the claim had not been taken.

April 13 – Ms Watt is not fit to give oral evidence at the upcoming libel trial, the High Court is told as the case returns for another hearing.

May 10 onwards – The trial began

Twitter lost ‘multiple critical engineering teams’ as it loses 32% of staff over Musk’s...

Yale sophomore student, 20, reveals she hid her attempted suicide from college after she...