Racegoers have been snapped queuing up with umbrellas as they enter the Grand National, which returned to Aintree racecourse today, after taking a two-year hiatus due to Covid.

This year’s event marks a return to pre-pandemic years, with revellers due to arrive at the course in their droves to have a flutter on the horses.

And images certainly show people making the most of being able to attend in person today, after having to watch the action on the small screen last year.

Despite less than perfect weather conditions, including blustery winds, drizzle, and maximum temperatures of 10C, many attendees have been pictured donning Spring outfits, including open-toed heels, lace jumpsuits, and dresses without jackets to show off their style.

Many ladies opted to wear hats and fascinators, which they were forced to hold onto their heads, as strong breezes threatened to blow them away. Meanwhile, others were spotted optimistically sporting sunglasses, despite the grey skies.

All white: meanwhile, these ladies donned all-white ensembles for day one of the Grand National – with one opting for an all-lace look, despite the weather 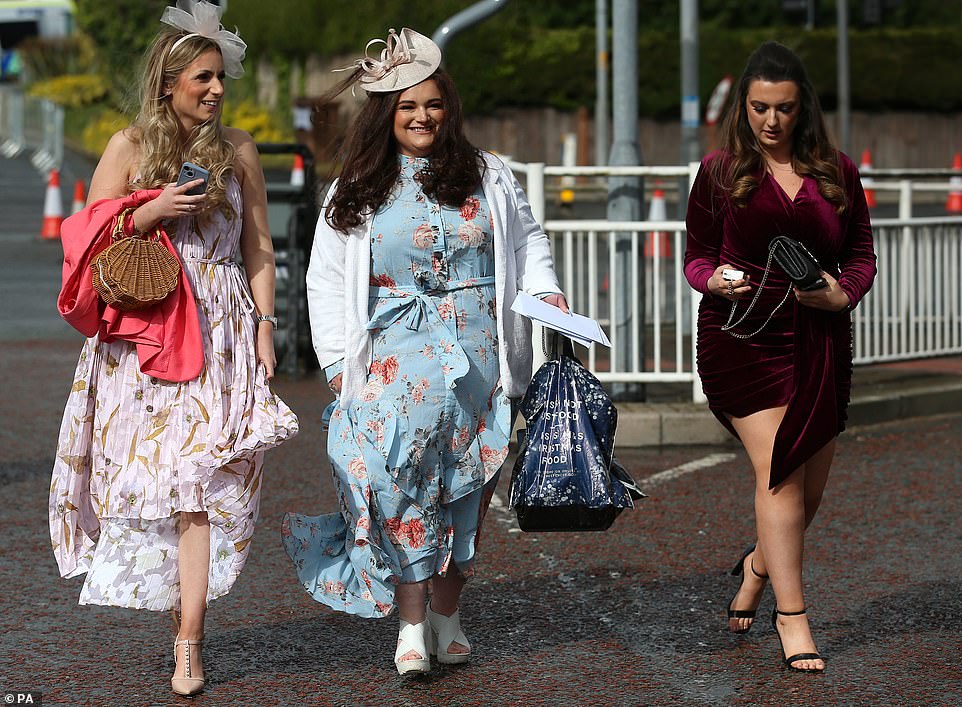 Here comes the girls! Women arrive at the Liverpool racecourse dressed up in fancy frocks and high heels for 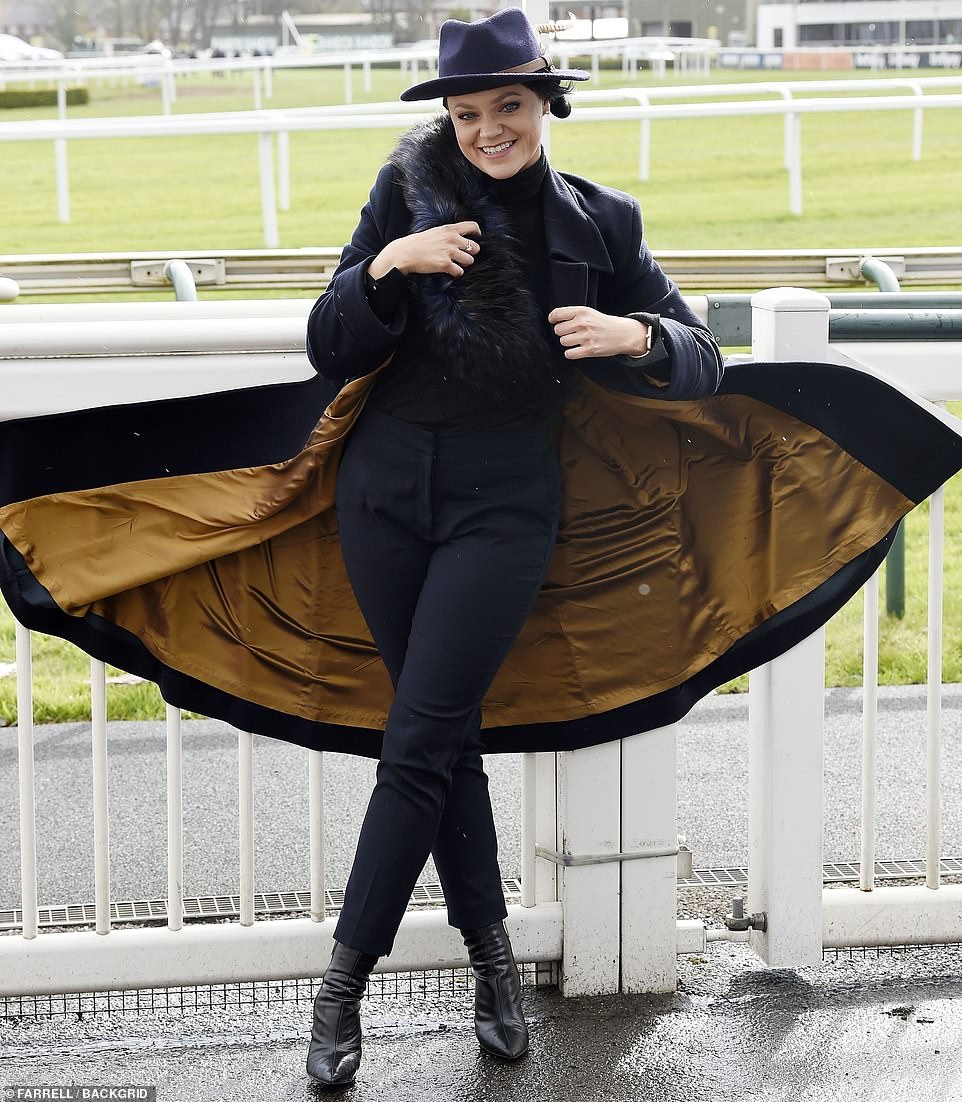 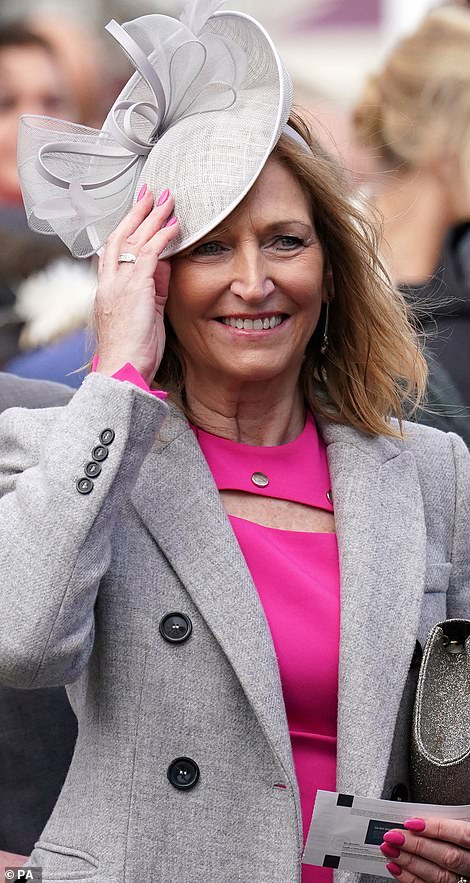 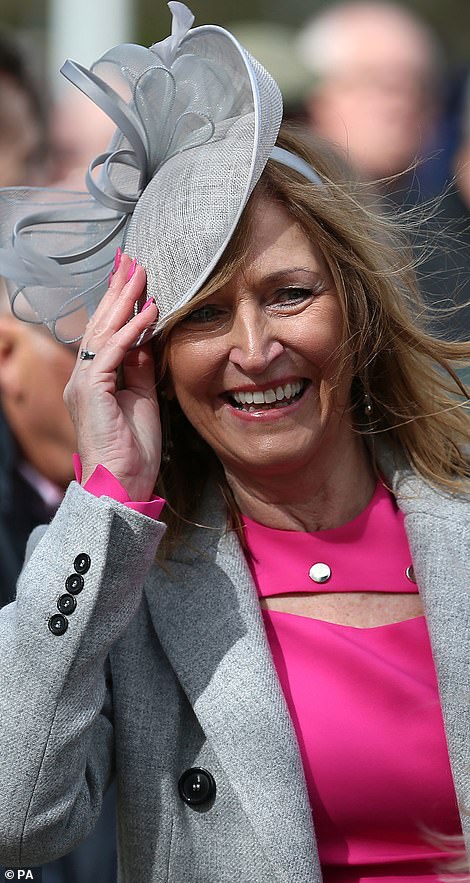 Hold onto your hats! One racegoer was pictured clutching her fascinator to make sure it wasn’t blown off her head while she waited in the queue 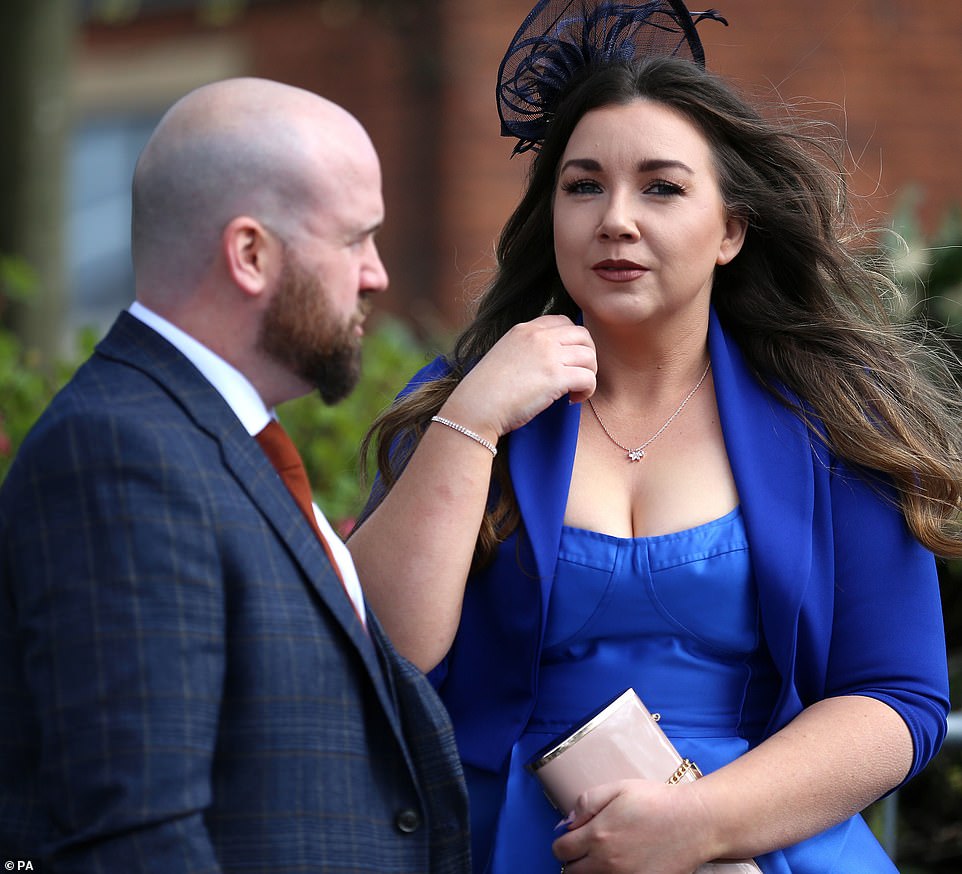 Although temperatures are not expected to exceed a maximum of 10C, some brave attendees were spotted in Spring dresses and light jackets 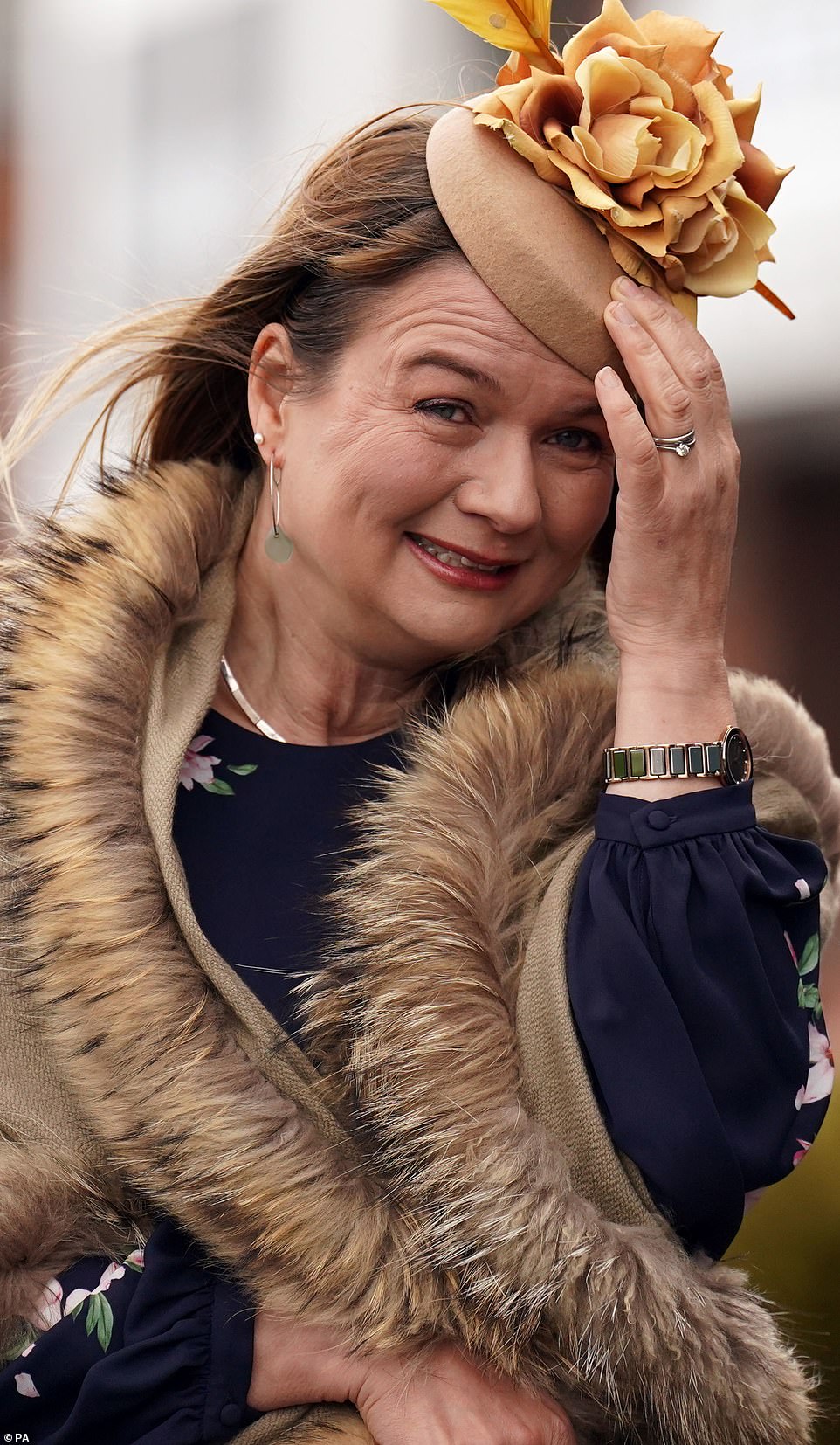 While she wrapped up against the low temperatures in this faux fur-trimmed wrap, this woman was not prepared for the wind, and had to hang onto her hat 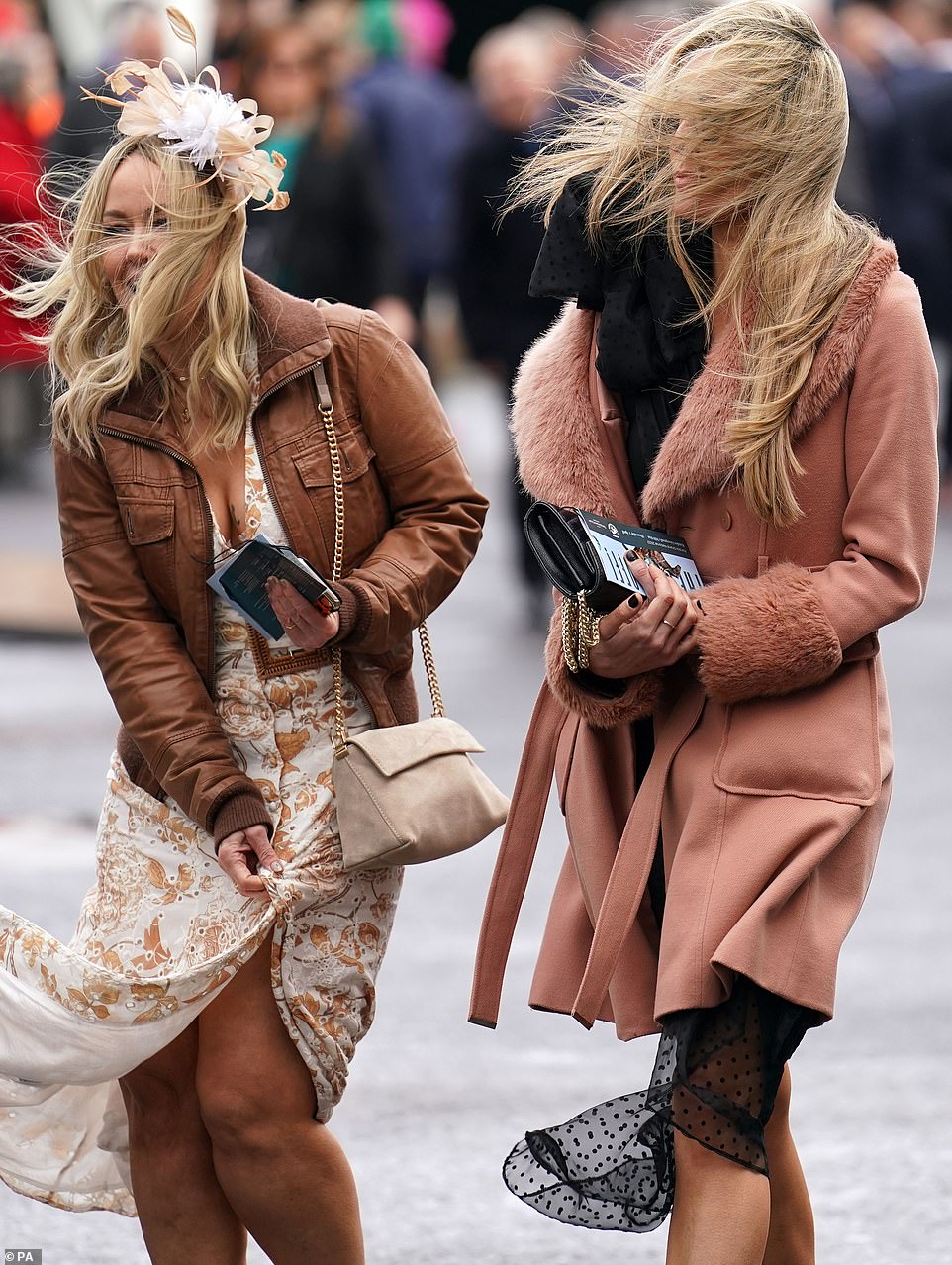 Luckily, this woman saw the funny side, and was snapped smirking as she held her skirt down against the wind 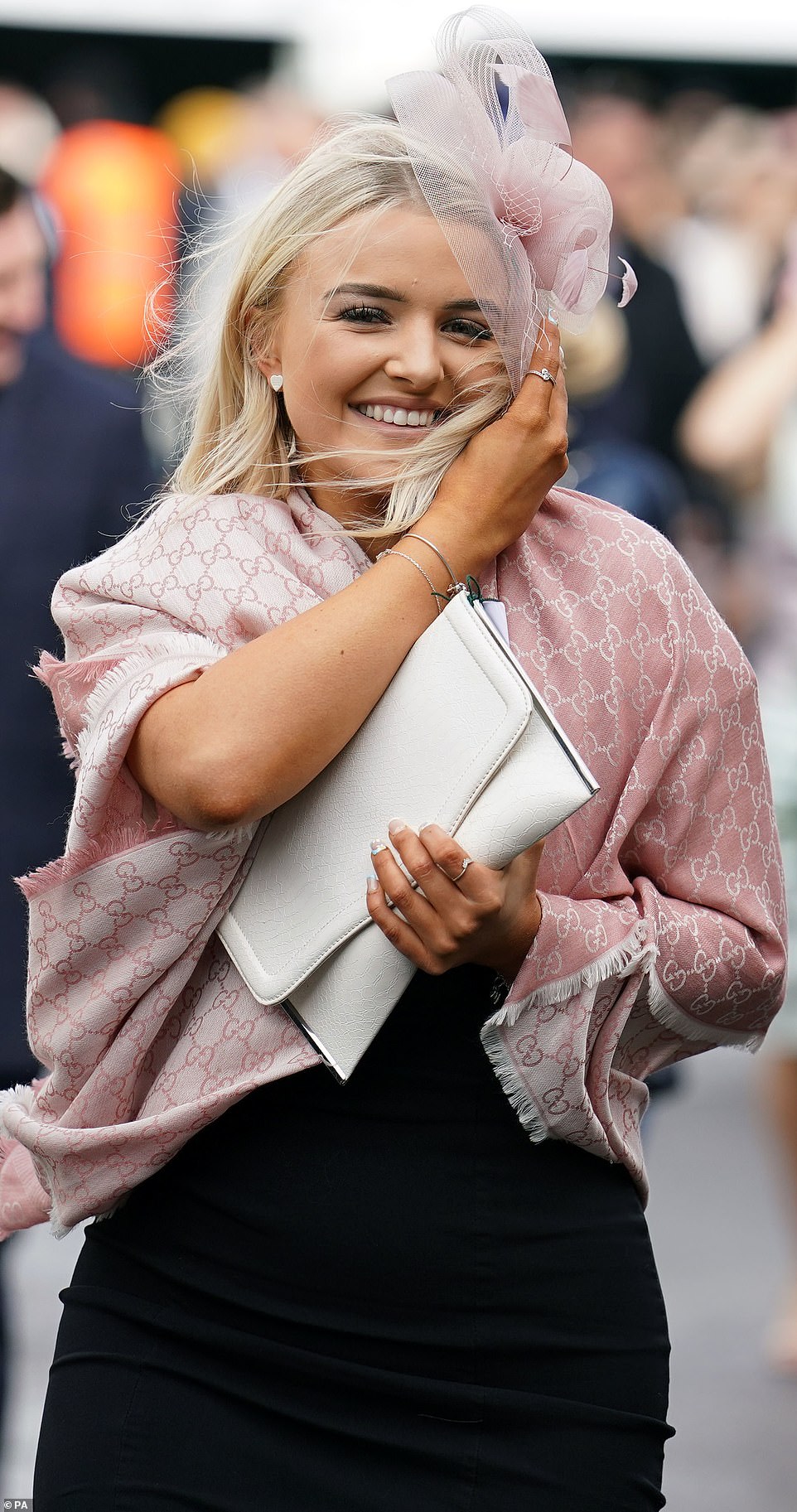 Another lady was also spotted grinning as she held down her fascinator, and tried to keep her hair out of her face 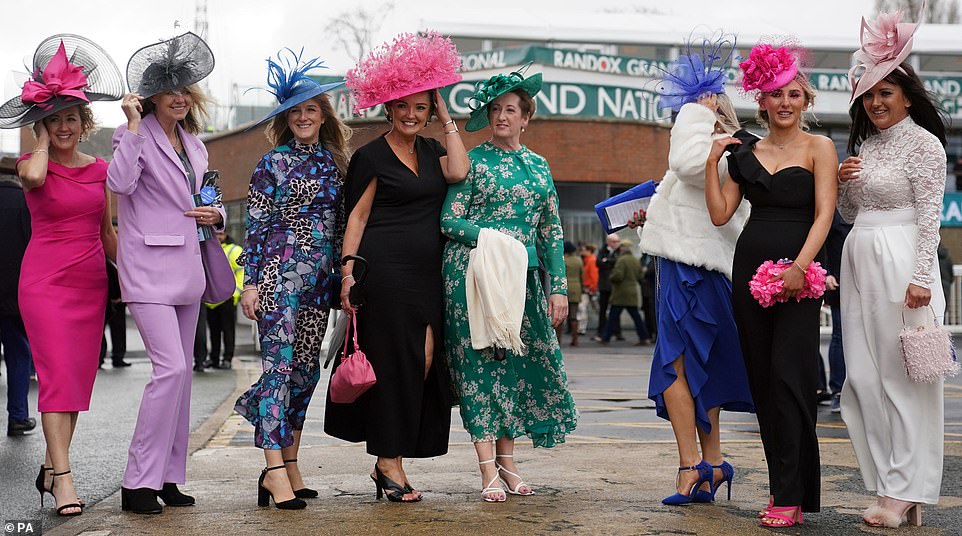 Bright shades as well as more muted pastel options were the order of the day, with this group showing off their outfits which came in a host of rainbow colours 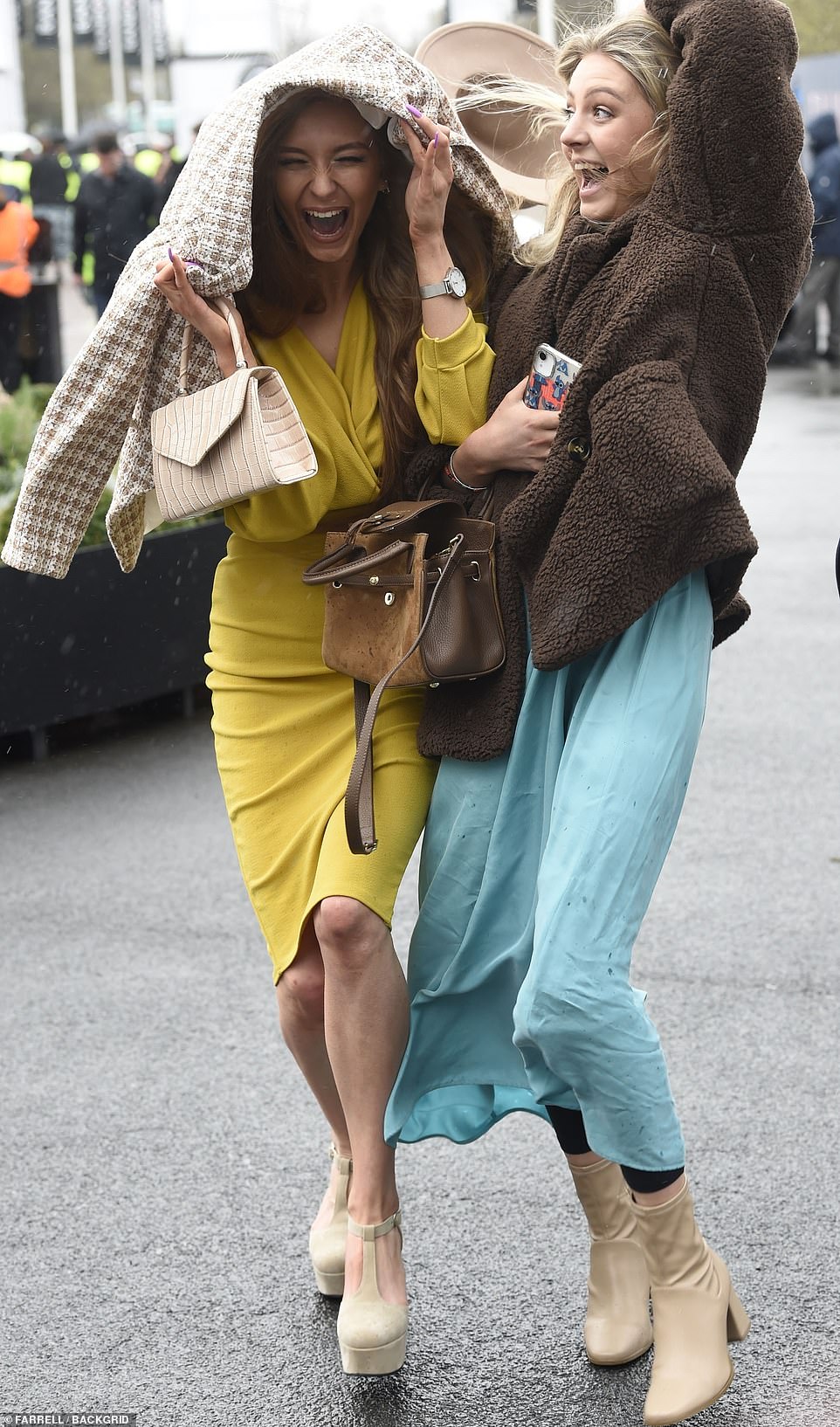 These women, dressed in midi dresses and jackets, seemed able to see the funny side, as the wind blew their clothing around 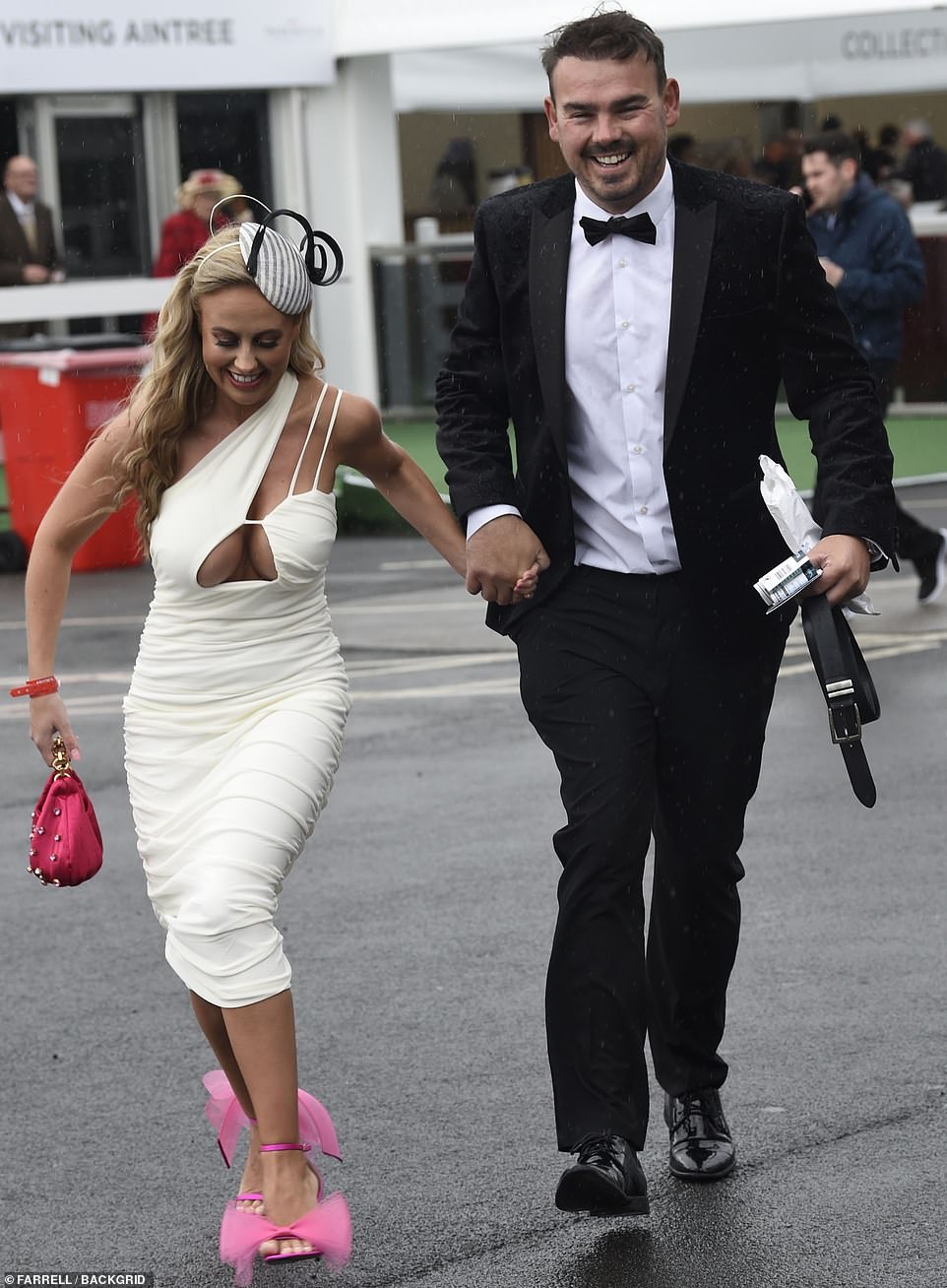 Others appeared to be running through the drizzle, perhaps in an attempt to find a drier, and warmer spot inside somewhere 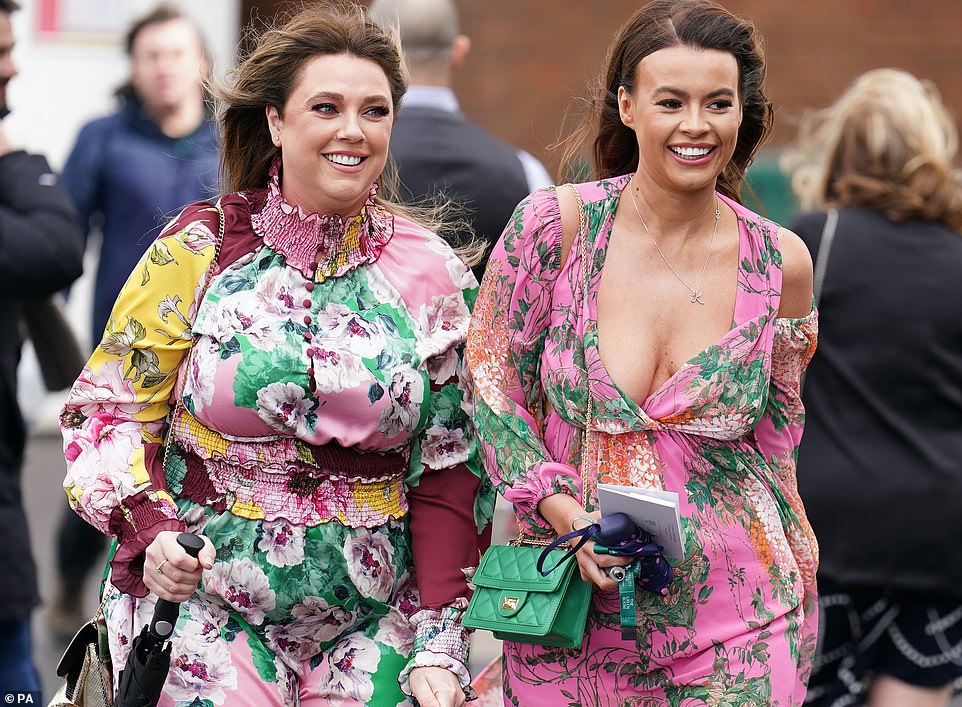 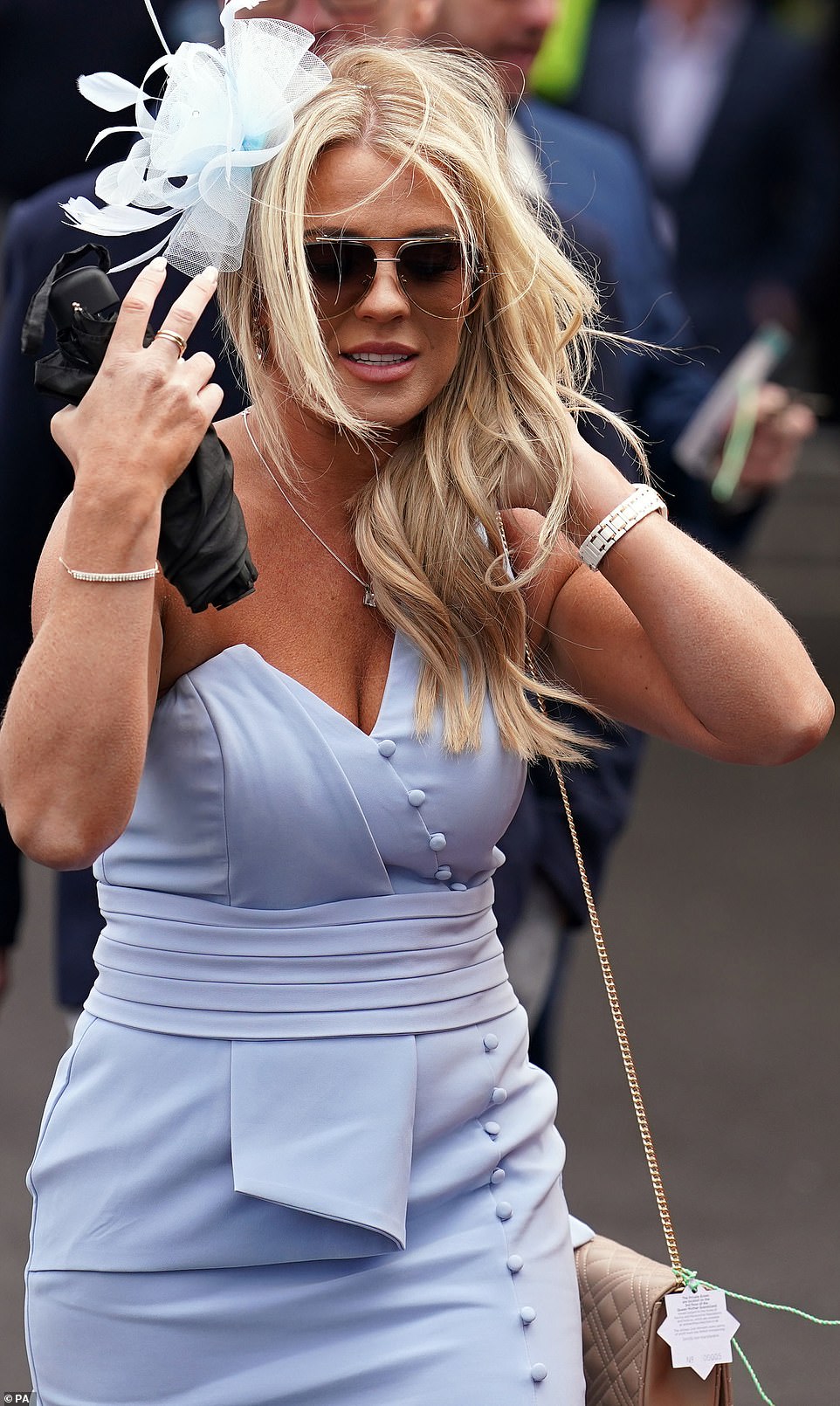 Another reveller, who’d opted for a lavender-coloured fitted dress, looked less than happy about the weather, as she battled against the wind to smooth down her locks

Around 150,000 people are expected to attend the event itself, with a further 500 million expected to tune in to watch it on television globally

Around 150,000 people are expected to attend the three-day festival, making it one of the largest of its kind in the world, with more than £25 million expected to be spent on bets.

And the revelry doesn’t stop there: previously the event, which is now in its 183rd year, has seen attendees down a staggering 20,000 bubbly to get into the party spirit.

Away from the track, a further 500 million people in more than 140 countries are expected to tune in to watch the action.

While the biggest competition, the 30-jump handicap steeplechase, takes place on Saturday, there are plenty of elite races across the three-days for equestrian enthusiasts to get excited about.

Among the top attractions on today’s schedule is the Betway Bowl Steeple Chase at 2:55pm, which considered the centrepiece of Aintree’s opening-day. 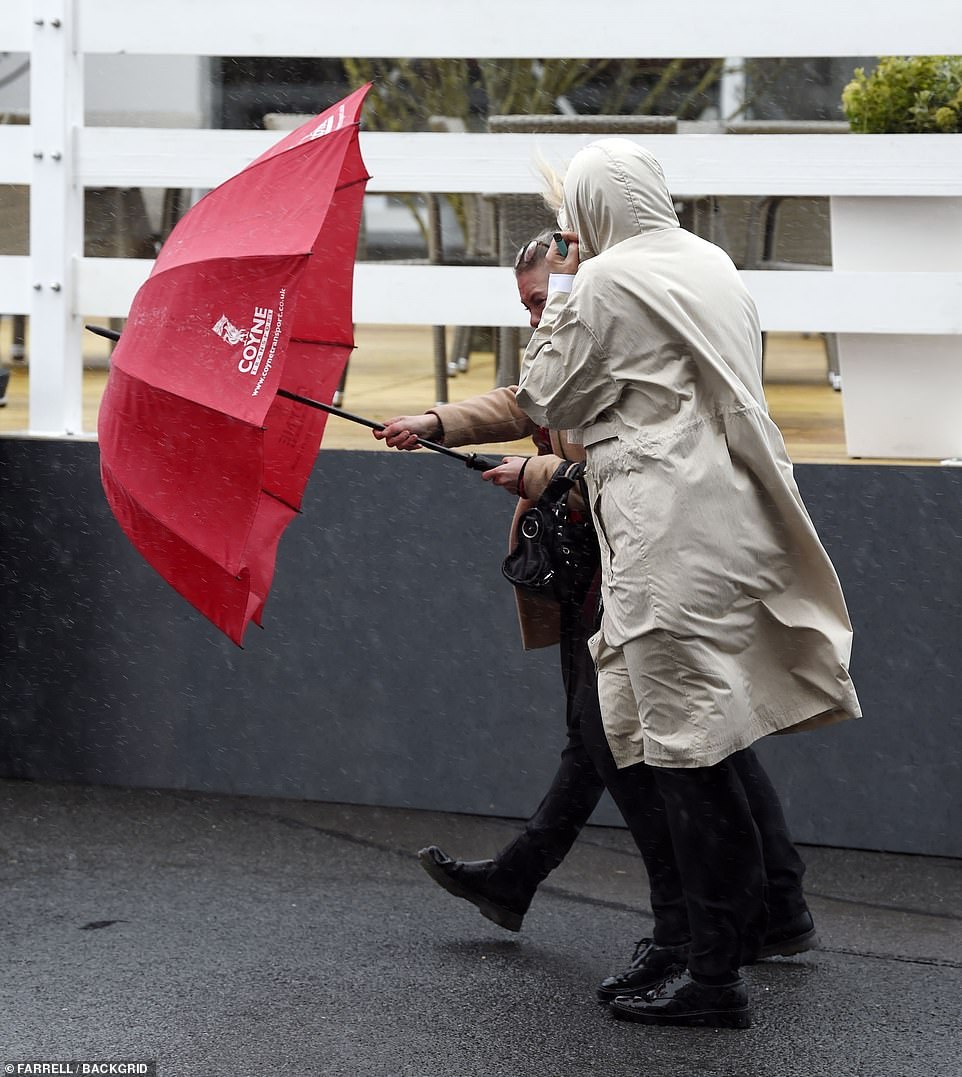 The wind seemed to be getting the best of some racegoers, who were snapped battling with their umbrellas 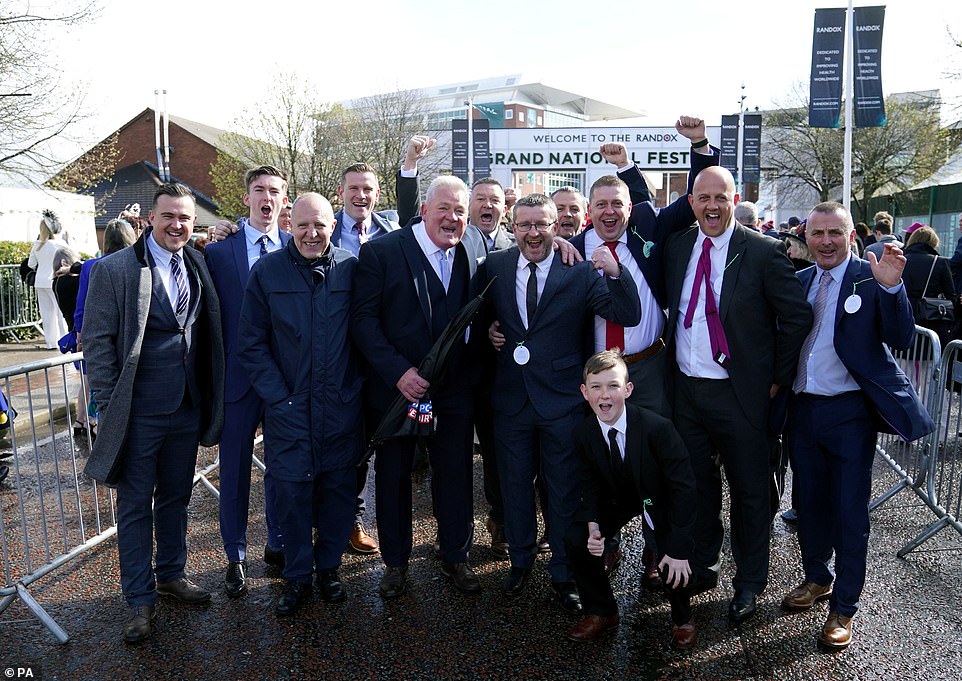 However, the less than optimum conditions did not dampen everyone’s spirits, with attendees pictured cheering as they waited to get into the racecourse 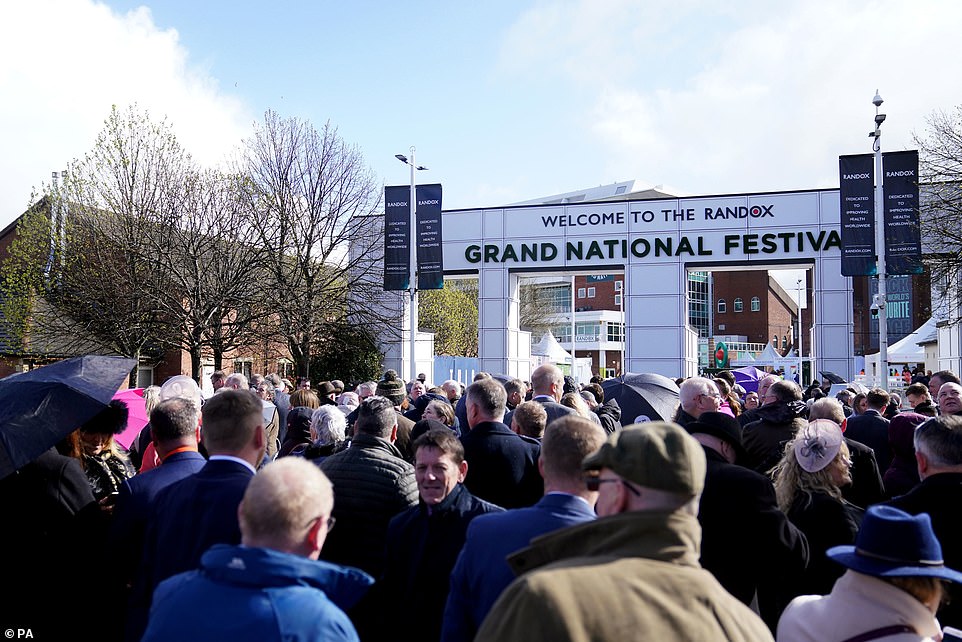 Around 150,000 people are expected to attend this year’s Grand National (pictured), despite Met Office predictions of blustery winds and drizzle 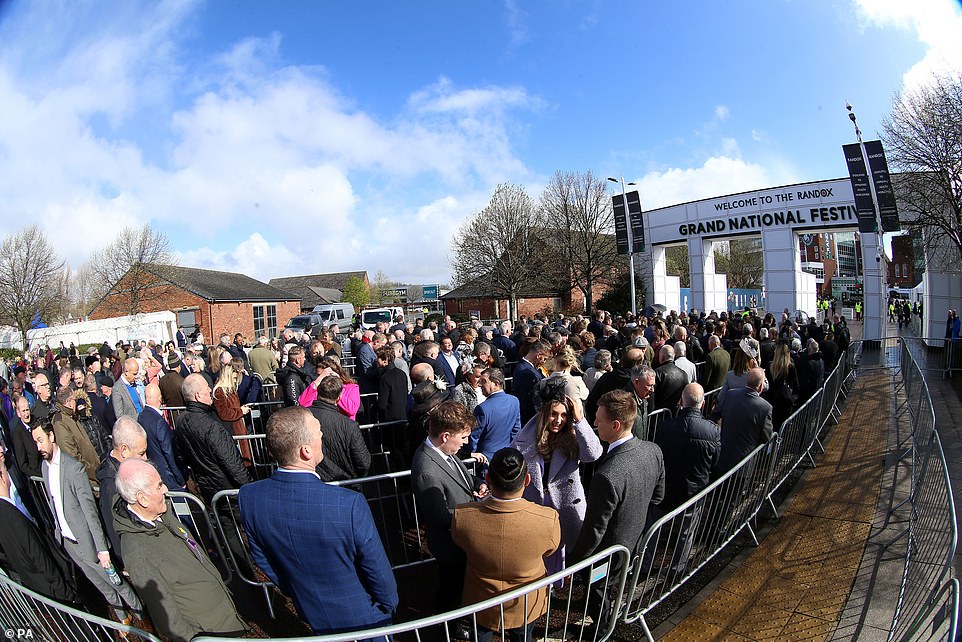 Anticipation: after the festival was held behind closed doors for the last two years, punters were pictured queuing at the entry 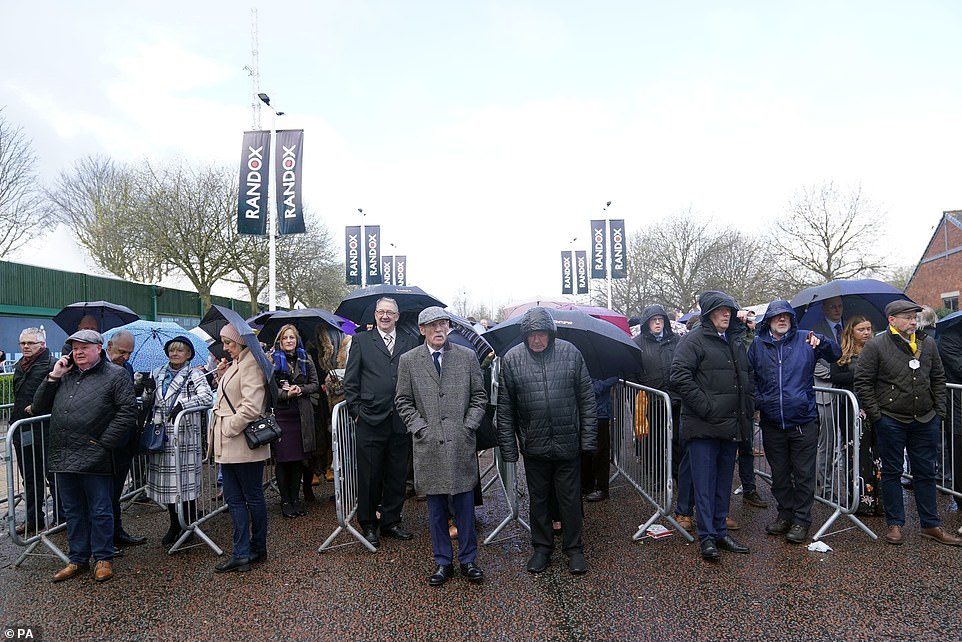 Queues started to build ahead of the event’s opening time, with racegoers keen to get through Aintree’s gates 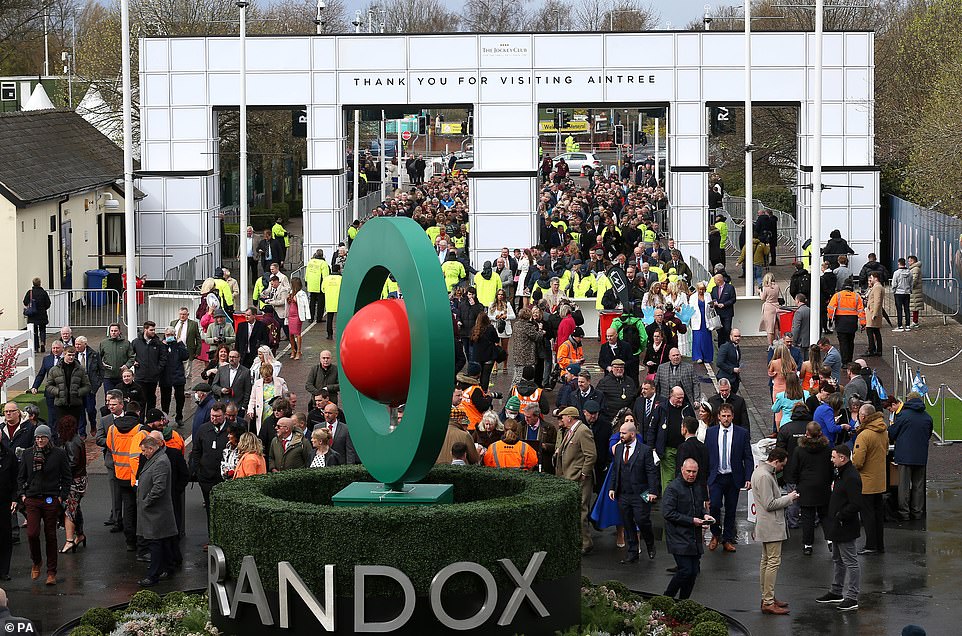 Fans pour into the grounds at the beginning of day 1 of the Grand National. Around 150,000 people are expected to attend over the next three days 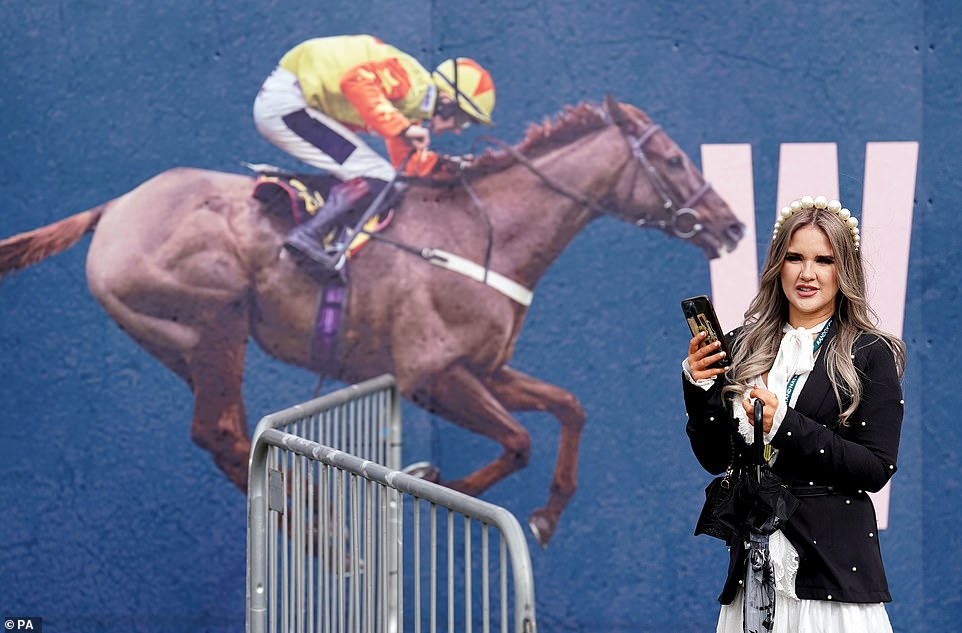 Another attendee showed off coordinating style, matching a blazer with pearl details with her pearl-encrusted headband and white dress

Others sensibly opted for suits rather than lightweight frocks, however, even those in warmer outfits were seen bracing themselves against the wind 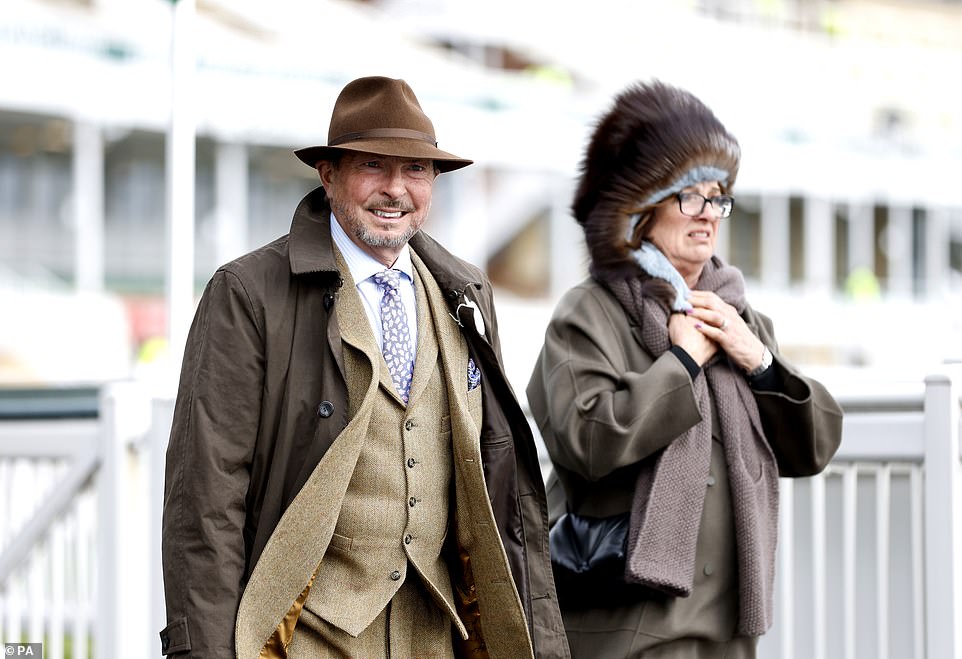 Despite wrapping up against the temperatures in sensible tweed and knits, even this couple looked dazed by the powerful winds at the race ground

Perhaps this woman had been hoping for better weather, choosing a lightweight dress and sandals, and optimistically accessorising them with a pair of sunglasses 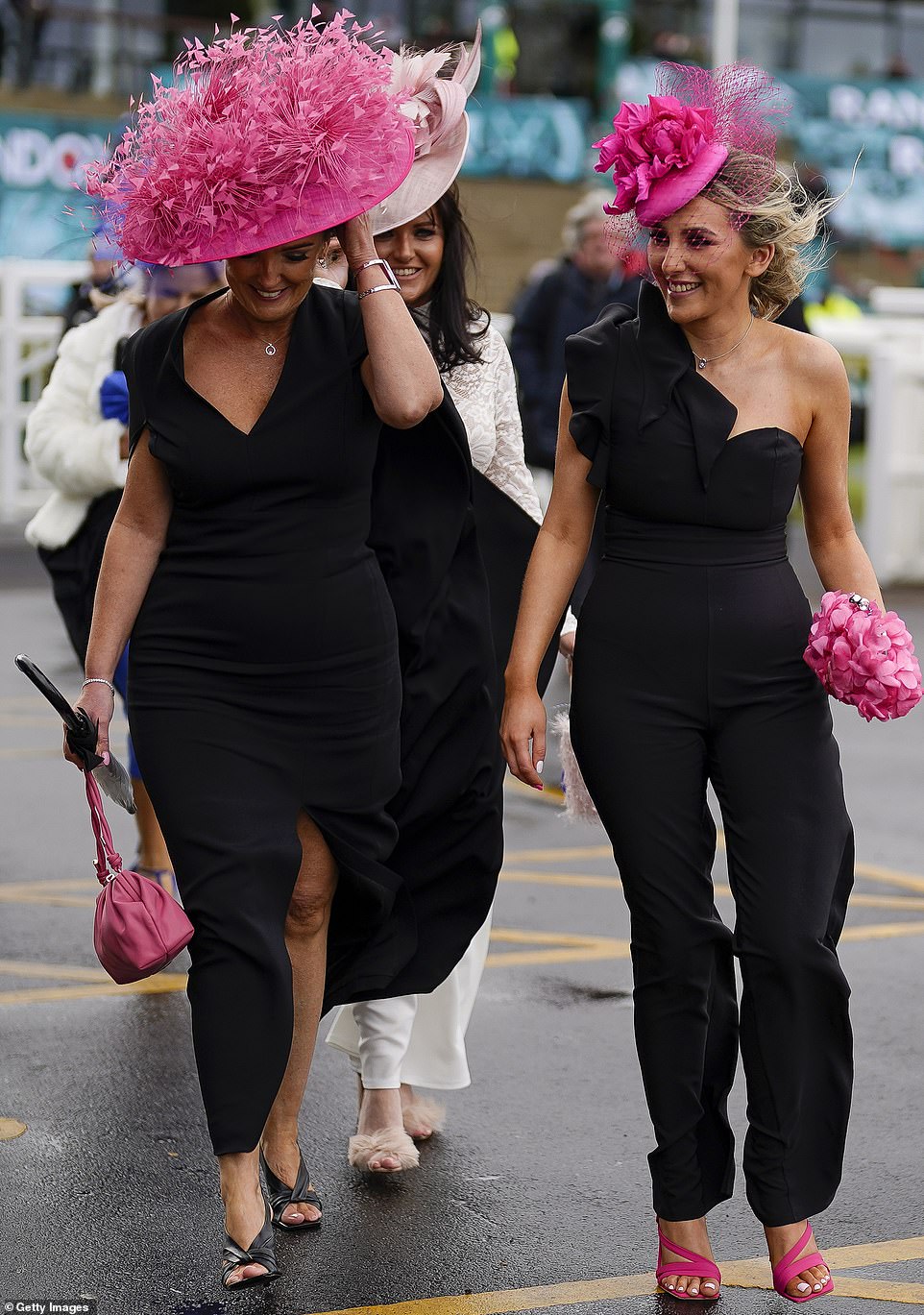 Guns out! The lack of sun did not stop this coordinating duo, who flashed their arms in shortsleeved matching black jumpsuits with hot pink accessories

A bit of bad weather wasn’t going to wipe the smiles off these women’s faces; they looked delighted to be at the races 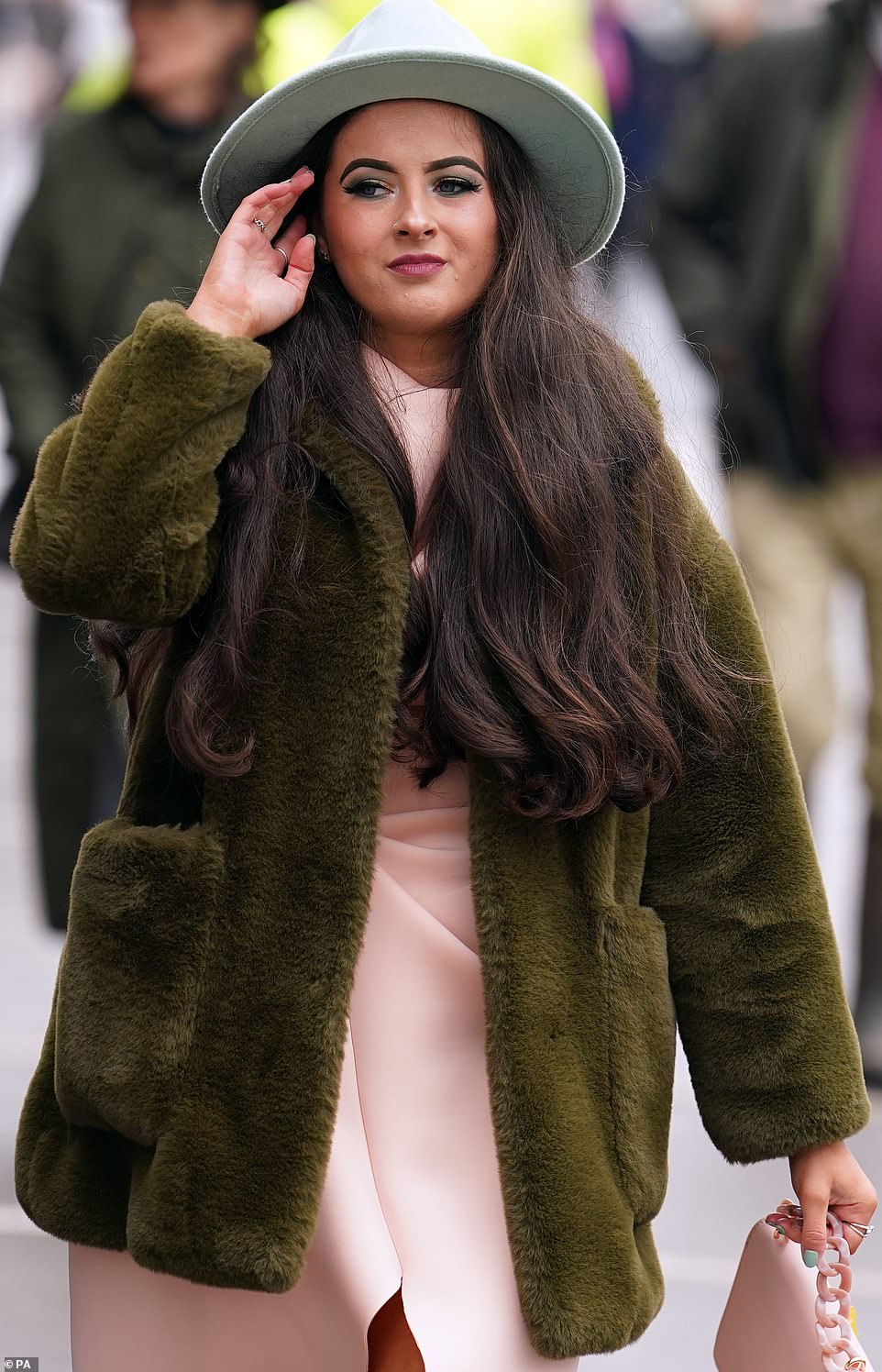 This racegoer found a practical solution to the bracing April temperatures, wrapping up in a cosy khaki green teddy coat

However, many eyes will be on the The Goffs UK Nickel Coin Mares’ Standard Open – aka the mares’ bumper – specifically, on rider Rachel Blackmore.

The high profile jockey, who recently became the first female to win the Cheltenham Gold Cup, will be riding Lady Excalibur in the 5.15pm race.

The Betway Aintree Hurdle, at 3:30pm, should also provide punters with some excitement, with trainer Willie Mullins seeming intent on asserting his dominance with Kemboy, after saddling a staggering 10 winners at Cheltenham.

Less promising for attendees could be the weather,  after the Met office warned that today’s weather won’t be optimum for outdoor events, with top temperatures not expected to exceed 10C. 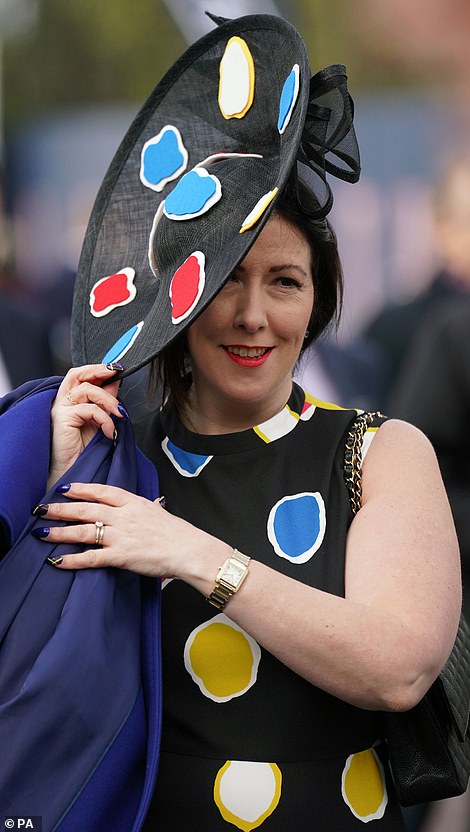 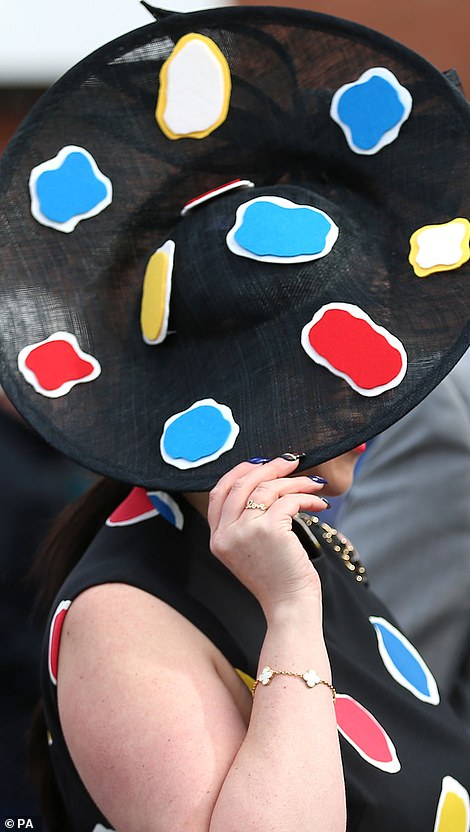 Making a statement: while many come for the horses, others take the opportunity to make a style statement. This racegoer opted for a colourful coordinating hat for her day 1 look 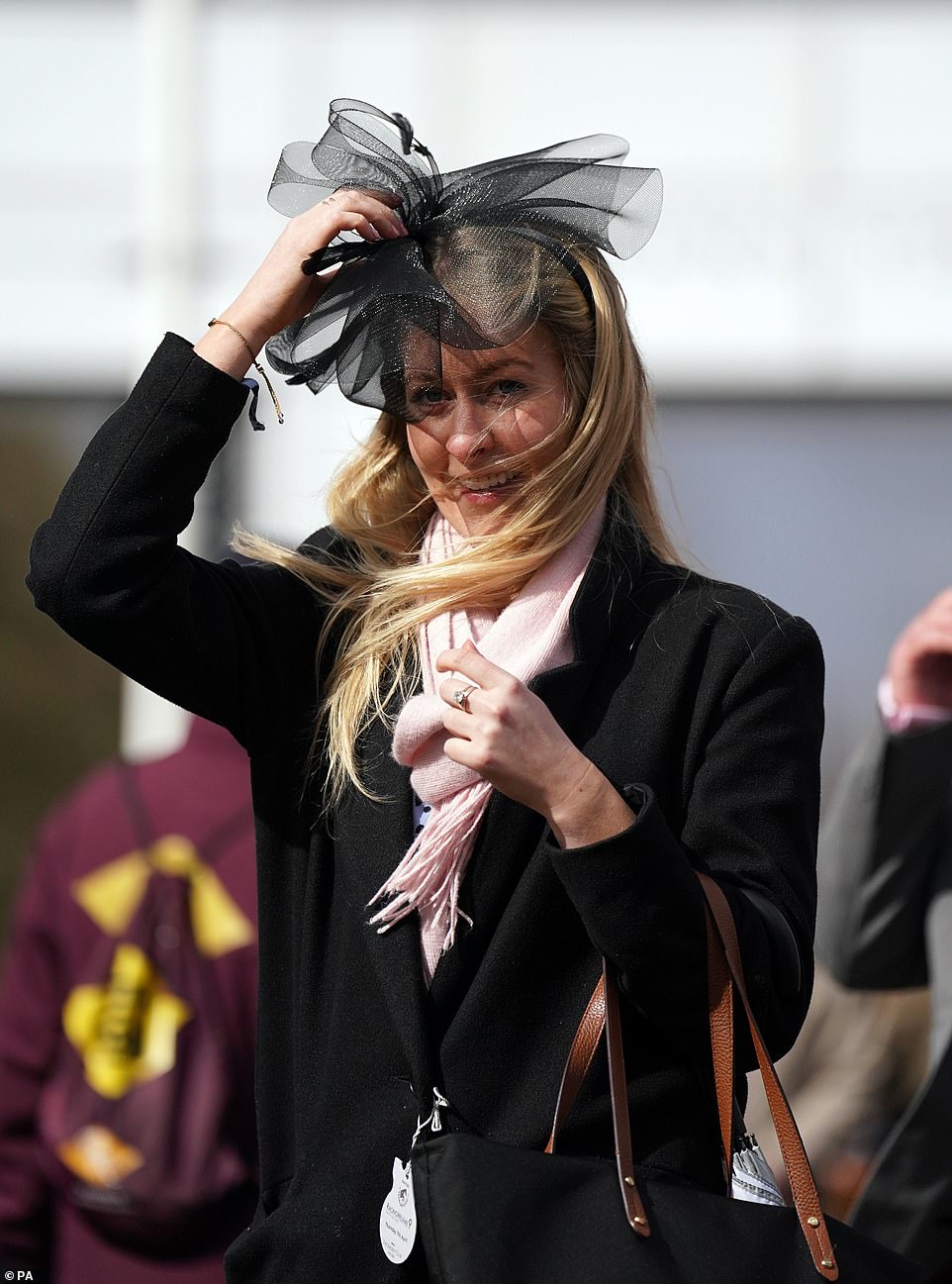 Breezy: Another racegoer is spotted holding onto her hat, as errant winds threaten to blow if off her head 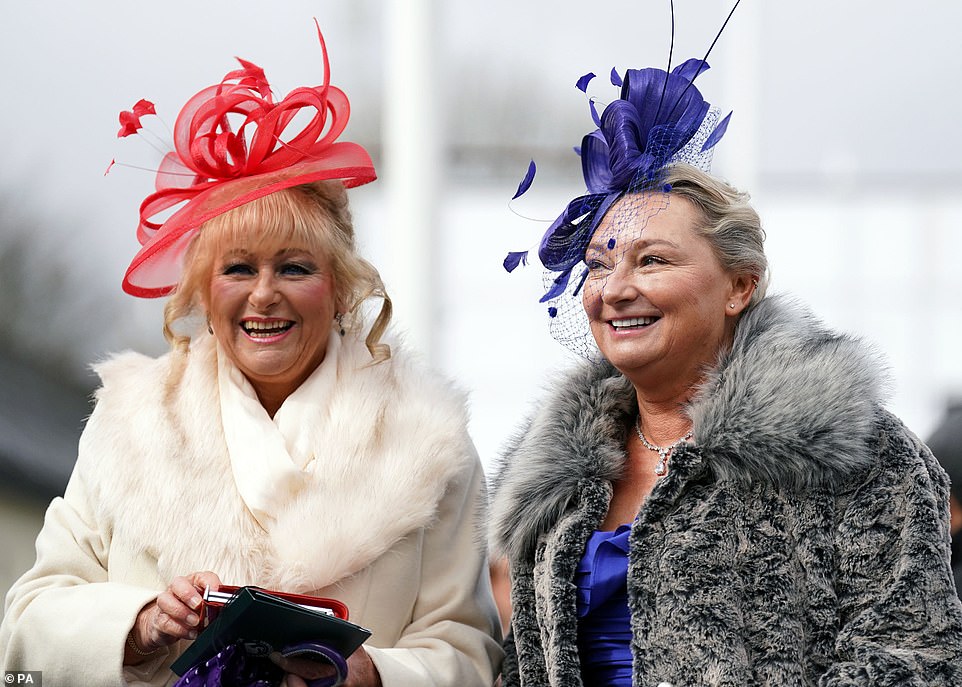 All smiles: these women were photographed wearing extravagant fascinators, which they coordinated to their dresses, for the opening day at Aintree 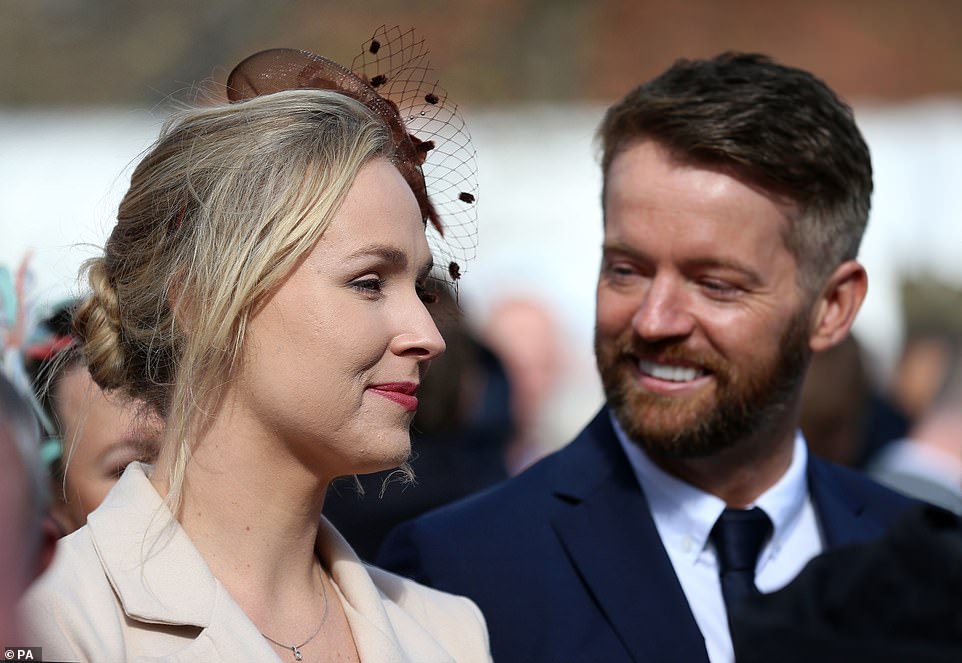 While some battled with umbrellas and hats, others looked delighted to be at the raceground, and seemed to be looking forward to the day’s schedule 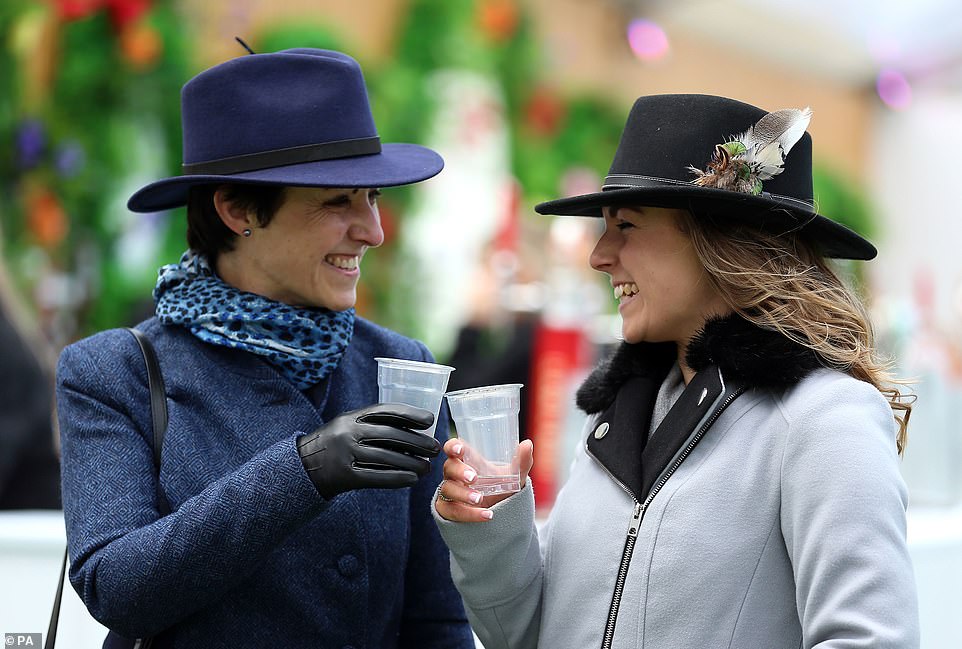 Cheers! Racegoers enjoy the atmosphere ahead of the races at Aintree Racecourse – despite the less than optimum weather conditions

While showers are expected during the morning, the afternoon should be drier – although rainfall on previous days could have affected the ground, making it soggy.

The Randox Grand National 2022, which is held at Aintree racecourse, runs from April 7 to April 9.

Tensions ‘grew when Duchess of Sussex was behind Princess of Wales in queue for...

Harry and Meghan drop trailer for their bombshell Netflix

Michael Jordan enjoys fun in the sun with his family during luxurious getaway to...

Trinny Woodall films herself getting a mammogram