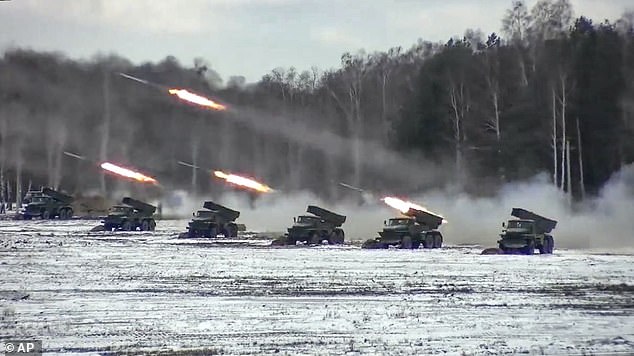 Russia is set to deploy 9,000 soldiers to Belarus, the Belarusian defence ministry has claimed, sparking fears that a fresh ground assault on the Ukrainian capital could be imminent.

Although the Kremlin has claimed that the move is part of a defensive operation, some commentators believe that Putin is attempting to draw Belarus – a country bordering both Russia and Ukraine – into his war, the Telegraph has reported.

Russia’s defence ministry stated that the decision to send soldiers into Belarus, for the first time since March, was ‘dictated by the ongoing activity in the areas bordering us.’

It comes as Russia also threatened to equip Belarusian warplanes with nuclear missile capability after Russian soldiers came flooding across the border ‘by the trainload’ on Saturday.

Belarus and Russia reportedly began combining some of their military forces shortly after the explosion on the Kerch Bridge – joining Russian-occupied Crimea to the Russian mainland – according to Belarus dictator Alexander Lukashenko.

China this week told its citizens to leave Ukraine amid increasing security threats and some countries, such as Serbia, have closed their embassies entirely. 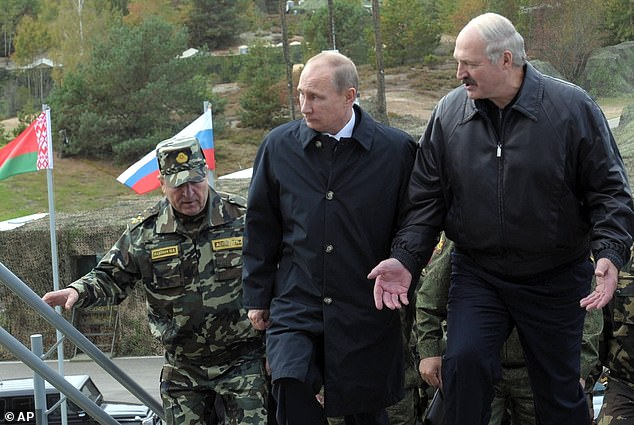 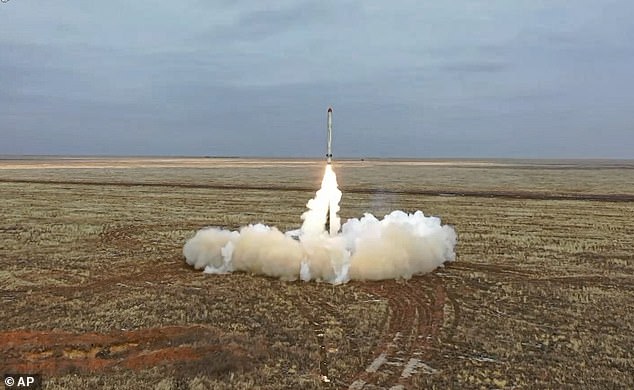 The Belarusian border, which lies 140 miles from Kyiv, was used as a launchpad for Putin’s invasion of Ukraine in February.

On Saturday, the Russian foreign ministry said it would equip Belarusian Su-25 warplanes with the capability to carry nuclear-capable missiles but that it was not yet arming Minsk, the Belarusian capital, with the missiles.

With an army size of roughly 50,000, Belarus does not currently have any nuclear missiles of its own, and is not regarded as an effective military force by defence experts.

Moscow and Minsk officials say that Ukraine is planning to invade Belarus, leading the Belarusian defence ministry to order its troops to be tested for ‘combat readiness’.

Dictator Alexander Lukashenko announced earlier this week that he would deploy a ‘joint military task force’ with Moscow – a move Minsk also claims is ‘purely defensive’.

The combat readiness test, ordered by Lukashenko, was announced as the head of his secret service said he expected to see a ‘turning point’ in Vladimir Putin’s invasion in the coming months.

Belarusian news agency BelTA reported Tuesday that the Security Council of the Republic of Belarus had ‘begun a test of the Armed Forces of Belarus in accordance with instructions of the head of state’ – echoing Russian rhetoric leading up to the invasion of Ukraine, in which Russia claimed it was carrying out military drills on the border. 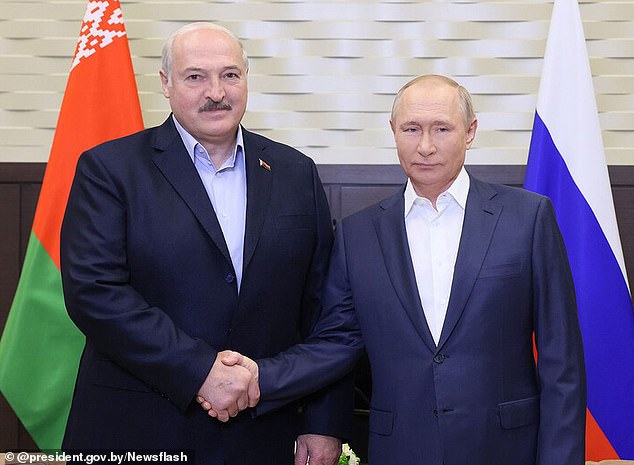 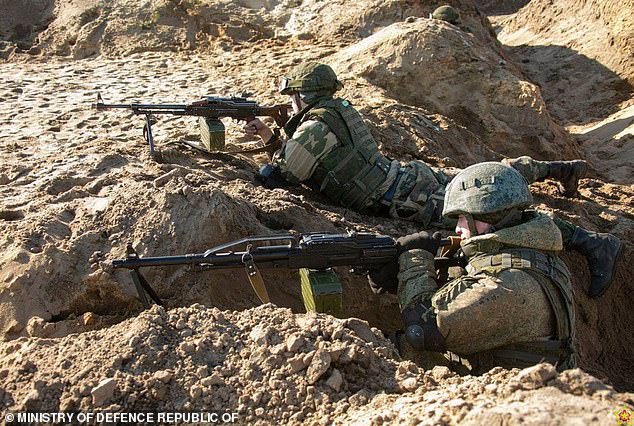 Russia’s defence ministry stated that the decision to send soldiers into Belarus, for the first time since March, was ‘dictated by the ongoing activity in the areas bordering us.’ Pictured: Russian (right) and Belarus soldiers during joint exercises of the armed forces, February 19 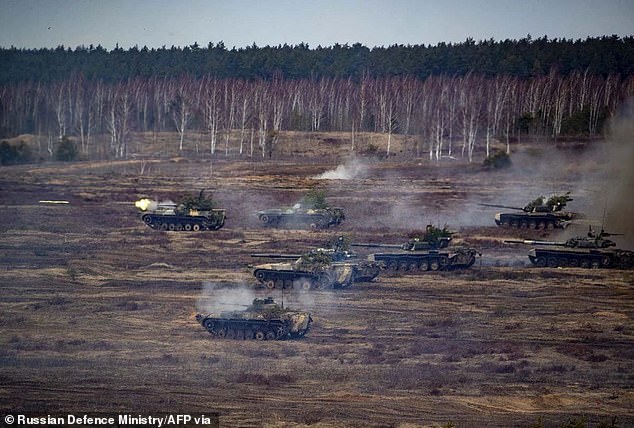 Russian and Belarus tanks during joint exercises of the armed forces on February 24, days before Putin ordered his forces to invade Ukraine on February 24

‘The test is comprehensive and covers the most important matters concerning the readiness of army units for carrying out their missions,’ the agency reported, noting that units will practice ‘switching to combat-ready state’ while undertaking marching drills, deployment drills and combat training missions.

The combat readiness test has included the Belarusian army testing its mobilisations procedures and calling-up reservists.

Up to 60 T-72 tanks had been taken out of storage in Belarus and sent to Belgorod in Russia, near the border with Ukraine, according to reports.

A Belarusian NGO, though, played down concerns of a new Russian ground assault on Kyiv originating in Minsk. It said that the Russian soldiers were newly mobilised men sent to bases across Belarus without tanks or armoured personnel vehicles.

‘It can be assumed that the decision to deploy a ‘regional grouping of troops’ is a cover for training mobilised citizens of the Russian Federation in Belarus,’ said the Belarusian Hajun Project which monitors military activity.

This latest alliance has sparked fury in Europe, with the European Commission urging Belarus to refrain from any involvement in Russia’s ‘brutal illegitimate undertaking’ that violated the United Nations Charter and international law.

G7 leaders said today that Lukashenko’s plan to deploy joint forces with Russia is a new instance of complicity with Moscow, and warned Minsk to ‘stop enabling’ Vladimir Putin’s war in Ukraine.

‘The announcement of a joint military group with Russia constitutes the most recent example of the Belarusian regime’s complicity with Russia,’ they said in a statement, urging the ‘Lukashenko regime to fully abide by its obligations under international law’. 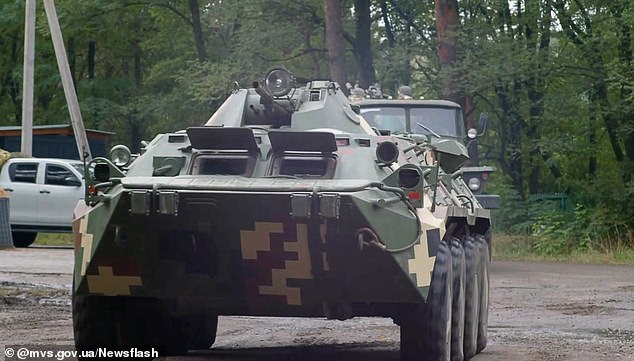 On Saturday, the Russian foreign ministry said it would equip Belarusian Su-25 warplanes with the capability to carry nuclear-capable missiles but that it was not yet arming Minsk, the Belarusian capital, with the missiles. Pictured: A Ukrainian military vehicle in Ukraine

Lukashenko has been a loyal ally of Russia’s president – openly supportive of his war in Ukraine.

He has, though, gone on record to complain that the war had dragged on for too long and has avoided committing Belarusian forces so far.

The invasion of Ukraine is far less popular in Belarus than Russia. Domestic support for Lukashenko is also fragile.

However, analysts have warned that if Putin ordered Lukansheko to join the war, he would comply.

‘Joining the war against Ukraine would generate further outrage against his deeply unpopular government but his most important, and only significant, supporter, Putin, wants him to back this failing invasion,’ said Kenneth Roth, the former executive director of New York-based Human Rights Watch.

Speaking on Monday, Lukashenko said Kyiv presents a clear threat to his country.

The remarks from Lukashenko, who has held power in Belarus since 1994, indicate a a combined Russian-Belarus joint force in the north of Ukraine. 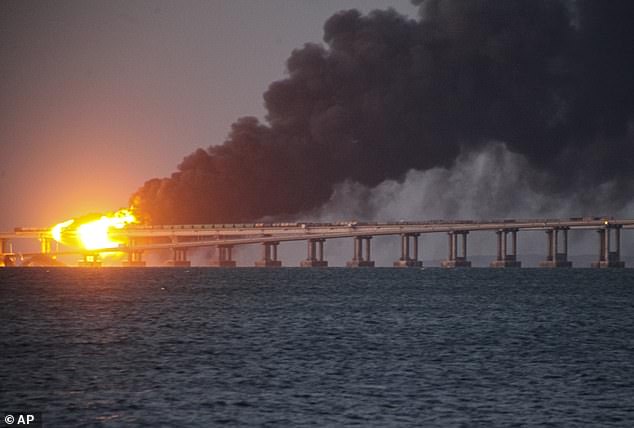 Belarus and Russia reportedly began combining some of their military forces shortly after the explosion on the Kerch Bridge (pictured, October 8) joining Russian-occupied Crimea to the Russian mainland, according to Lukashenko

‘Strikes on the territory of Belarus are not just being discussed in Ukraine today, but are also being planned,’ Lukashenko said at a meeting on security, without providing evidence for the assertion.

‘Their owners are pushing them to start a war against Belarus to drag us there.’

‘We have been preparing for this for decades. If necessary, we will respond,’ Lukashenko said, adding that he had spoken to Putin about the situation while at a meeting in St Petersburg.

Lukashenko said he had agreed with Putin to deploy a regional military group, and had started pulling forces together two days ago, apparently after an attack on Russia’s road and rail bridge to Crimea early on Saturday.

He said that a warning was delivered to Belarus through unofficial channels that Ukraine planned ‘Crimean Bridge 2’, though he did not give details.

‘My answer was simple. Tell the president of Ukraine and the other lunatics: if they touch one metre of our territory then the Crimean Bridge will seem to them like a walk in the park.’

Texas elementary school killer Salvador Ramos got job at Wendy’s to save up $4,000...

Brawl breaks out in crowd at third and final test between England and New...