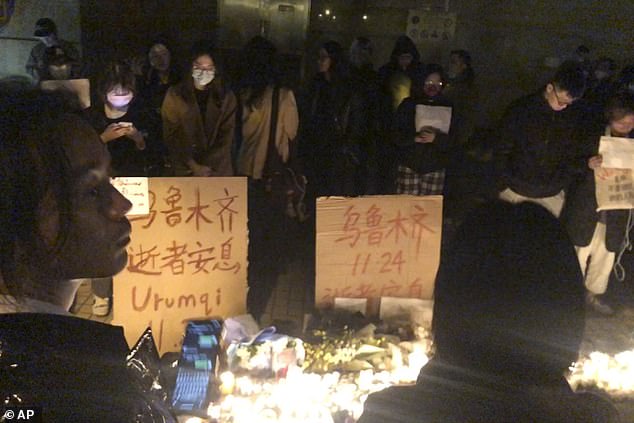 Angry protests against China’s pervasive anti-virus controls that have confined millions of people to their homes spread to one of the country’s biggest cities on Saturday.

Police in Shanghai used pepper spray against about 300 protesters, according to a witness. They gathered Saturday night to mourn the deaths of at least 10 people in an apartment fire last week in Urumqi in the Xinjiang region in the northwest.

Videos posted on social media that said they were filmed in Nanjing in the east, Guangzhou in the south and at least five other cities showed protesters tussling with police in white protective suits or dismantling barricades used to seal off neighborhoods.

Witnesses said a protest also occurred in Urumqi where the fire occurred after complaints it worsened the death toll.

Public fury forced authorities in the far western Xinjiang region to open up parts of the capital Urumqi, which has been subject to a punishing ‘zero-Covid’ lockdown for more than three months.

The protest was triggered by the deaths of ten people in a fire at a high-rise apartment block. Some have claimed lockdown measures hampered rescue efforts and the ability of residents to escape. 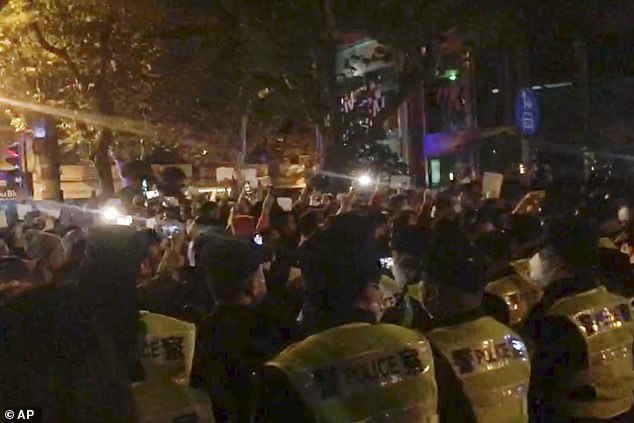 Public fury forced authorities in the far western Xinjiang region to open up parts of the capital Urumqi, which has been subject to a punishing ‘zero-Covid’ lockdown for more than three months

Footage posted online showed hundreds of demonstrators confronting riot police on the streets of Urumqi, where many of the four million residents have been barred from leaving their homes for as long as 100 days.

President Xi Jinping´s government faces mounting anger at its ‘zero-COVID’ policy that has shut down access to areas throughout China in an attempt to isolate every case at a time when other governments are easing controls and trying to live with the virus.

That has kept China´s infection rate lower than the United States and other countries. But the ruling Communist Party faces growing complaints about the economic and human cost as businesses close and families are isolated for weeks with limited access to food and medicine.

Some protesters were shown in videos shouting for Xi to step down or the ruling party to give up power. 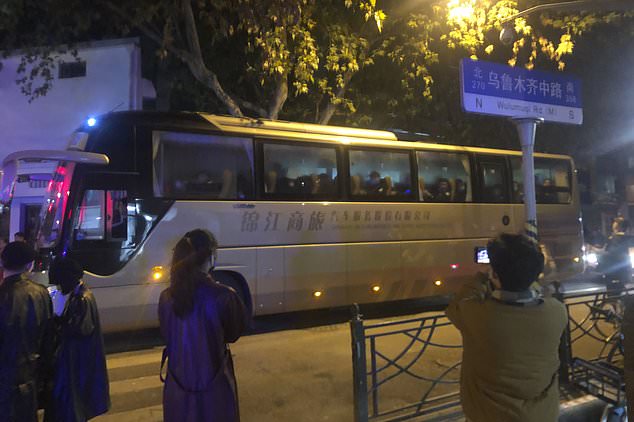 Protesters are taken away by police in a bus in Shanghai on Saturday. Protests against China’s restrictive COVID measures appeared in a number of cities Saturday night, in displays of public defiance fanned by anger over a deadly fire in the western Xinjiang region

One video shows a man shouting at uniformed officials, ‘Whose children are you, and whose father are you? Don’t you have a conscience? How many people died today?’

Other videos showed demonstrators in a plaza singing China’s national anthem, seen as an attempt to protect themselves from accusations of being against the government. One of the lines is: ‘Rise up, those who refuse to be slaves.’

In some scenes, people shouted and pushed against rows of men in the white whole-body hazmat suits.

In Shanghai, protesters gathered at Middle Urumqi Road at midnight with flowers, candles and signs reading ‘Urumqi, November 24, those who died rest in peace,’ according to a participant who would give only his family name, Zhao.

Zhao said one of his friends was beaten by police and two were pepper-sprayed. He said police stomped on his feet as he tried to stop them from taking his friend away. He lost his shoes and left barefoot.

Around 100 police stood in lines to prevent protesters from gathering or leaving, Zhao said. He said buses with more police arrived later.

Another protester, who gave only his family name, Xu, said there was a larger crowd of thousands of demonstrators, but police stood in the road and let them pass on the sidewalk.

Internet users posted videos and accounts on Chinese and foreign social media showing protests in Shanghai, Nanjing, Chengdu and Chongqing in the southwest and Urumqi and Korla in Xinjiang.

A video that said it was shot in Urumqi showed protesters chanting, ‘Remove the Communist Party! Remove Xi Jinping!’

Protests in Xinjiang are especially risky following a security crackdown against Uyghurs and other mostly Muslim ethnic minorities that has included mass detentions.

Most protesters in the videos were members of China’s dominant Han ethnic group. A Uyghur woman in Urumqi said Uyghurs were too scared to take to the streets.

‘Han Chinese people know they will not be punished if they speak against the lockdown,’ said the woman, who asked not to be identified by name for fear of retaliation. ‘Uyghurs are different. If we dare say such things, we will be taken to prison or to the camps.’

Posts on Chinese social media were quickly deleted, which Beijing often does to suppress criticism it worries might serve as a rallying point for opposition to one-party rule.

People in some parts of Xinjiang have been confined to their homes since early August. Some complain they lack access to food and medicine and have posted appeals for help online.

In a possible attempt to placate the public, authorities on Saturday announced they had achieved ‘societal zero-COVID’ and restrictions in Urumqi and Korla would be relaxed. The government said taxi, railway, bus and other public services that had been suspended for weeks would resume. State-owned China Southern Airlines announced it would resume flights from Urumqi to four Chinese cities starting Monday.

Social media users greeted news the disease was under control with disbelief and sarcasm. ‘Only China can achieve this speed,’ wrote one user on the Sina Weibo social media service.

Party leaders promised last month to make restrictions less disruptive by easing quarantine and other rules but said they were sticking to ‘zero-COVID’.

Meanwhile, a surge in infection pushed daily cases above 30,000 for the first time led local authorities to impose restrictions residents complain exceed what is allowed by the national government. 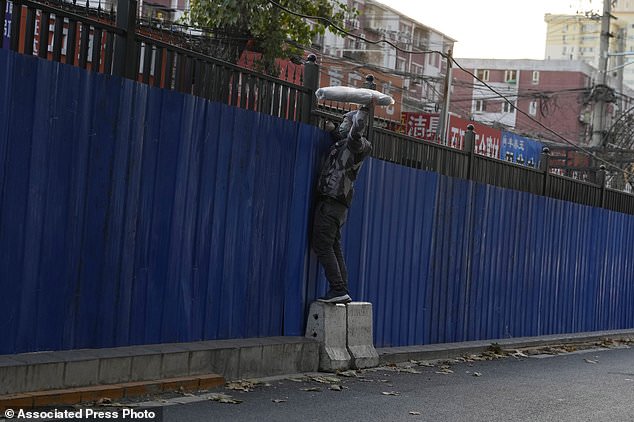 The fire deaths in Urumqi triggered an outpouring of angry questions online about whether firefighters who needed three hours to extinguish the blaze or victims trying to escape might have been obstructed by locked doors or other controls.

Authorities denied that, but the disaster became a focal point for public anger about anti-disease restrictions, ruling party propaganda and censorship.

In Beijing, 1,700 miles away, residents also staged protests, confronting officials over restrictions on their movement. Some successfully pressured authorities into lifting the lockdown measures ahead of schedule.

Earlier in the week, residents in the southern city of Guangzhou clashed with police, complaining about being confined for weeks, as well as food shortages.

Officials there responded by erecting concrete walls and barbed wire to prevent anyone leaving the Haizhu district, the epicentre of the protests.

And in Zhengzhou, the city government tried to ease public anger by apologising for the death of a four-month-old baby. 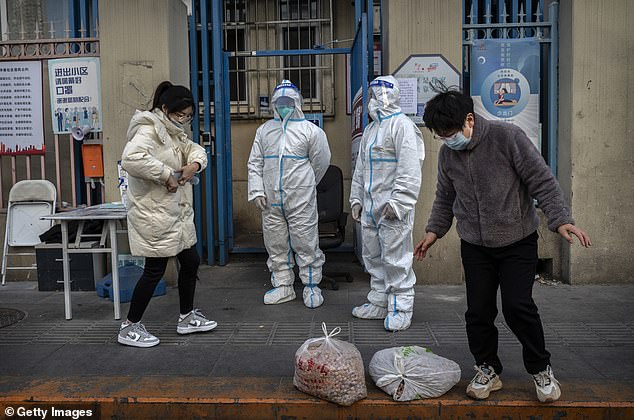 Footage posted online showed hundreds of demonstrators confronting riot police on the streets of Urumqi, where many of the four million residents have been barred from leaving their homes for as long as 100 days

The girl died after a delay in receiving medical attention while suffering vomiting and diarrhea in quarantine at a hotel.

During the lockdown in Xinjiang –home to ten million Uighurs, the minority facing persecution – some residents had their doors chained shut to prevent them breaching restrictions.

The brute-force tactics led many in Urumqi to believe the victims of Friday’s fire were prevented from escaping and that the official death toll was not the full picture.

The unprecedented protests, and anger online, are the latest signs of frustration at China’s approach to tackling Covid.

It is the only major country still fighting the pandemic with mass testing and lockdowns.

It marks a sharp turn in public opinion. Early in the pandemic, China’s approach to controlling the spread of Covid was praised by its own citizens – even as Beijing tried to dismiss widely held suspicions that the pandemic started after a leak at a Wuhan laboratory.

LaKeith Stanfield says he’s engaged to Kasmere Trice amid claims from woman that he...

All the times Jeff Brazier hinted at split from wife Kate before it was...