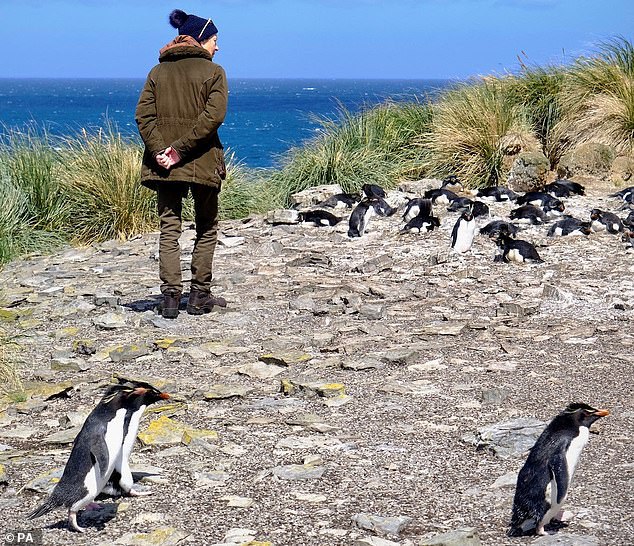 Mike Tindall may have spent the last three weeks in the Australian jungle competing on I’m A Celebrity…- but he’s not the only royal to taken to the wild this month.

In fact, the former England rugby ace’s mother-in-law Princess Anne, 72, spent the past six days on a low-key tour of the Falkland Islands.

In photographs released today from the Princess Royal’s visit, the King’s sister could be seen studying wildlife on the beaches, including penguins and an enormous seal.

Meanwhile she also met with Governor of the Islands and members of the Legislative Assembly and laid wreaths to mark the 40th Anniversary of the 1982 Conflict.

Princess Anne, 72, could be seen studying a group of penguins as she undertook a six day trip to Falkland Islands

Elsewhere, she visited conservation sites that showcase the unique flora and fauna in the Overseas Territory.

During the low-key six-day trip, she also visited the Mount Pleasant base for British Forces South Atlantic Islands.

In photographs released from the visit, Anne donned a relaxed pair of khaki trousers and a large anorak, as well as a cosy navy bobble hat.

Her visit came as the island marked 40 years since the conflict. On April 2, 1982, Argentina invaded the Falkland Islands, over which it had claimed sovereignty for many years. 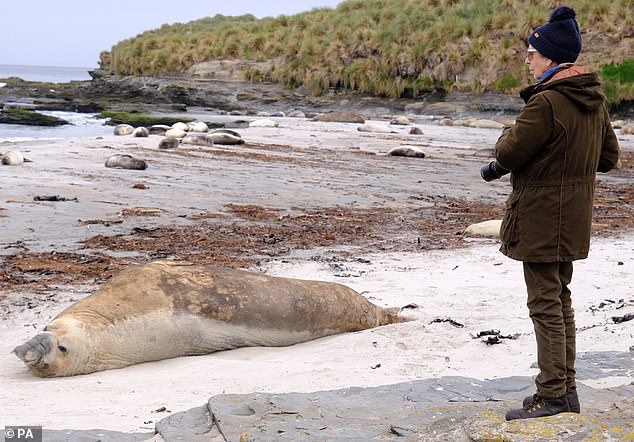 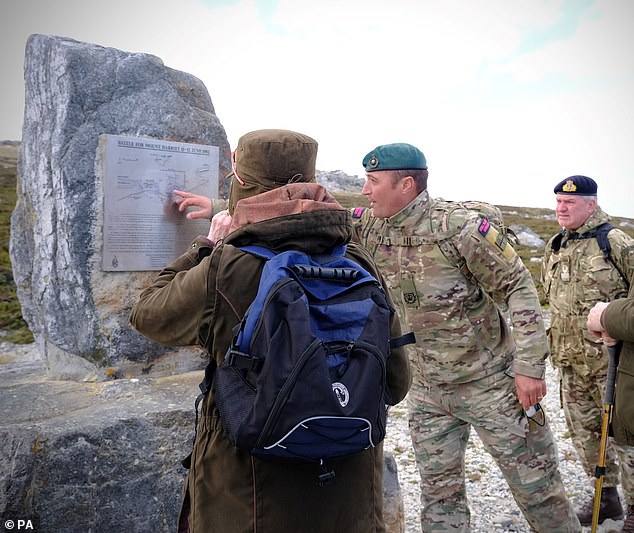 Argentine leaders believed recapturing the territory would restore support for the ruling party at a time of economic crisis.

The UK had ruled the islands for 150 years but the junta justified the invasion by saying Argentina had inherited the land from Spain in the 1800, citing the Falklands’ proximity to South America as a further reason.

Prime Minister Margaret Thatcher deployed a task force to fight on behalf of the traditionally British residents of the Falklands.

In the short war that followed, 649 Argentinians died, along with 255 British servicemen and three islanders.

Following a tough sea battle, British forces made landing to the north of Stanley, before fighting their way in to the capital. The Argentinians surrendered on 14 June

The ruling military junta did not believe the United Kingdom would attempt to regain the islands by force as they lay in the South Atlantic some 8,000 miles from the British Isles.

However, a task force was sent by Prime Minister Margaret Thatcher, reaching the Islands in early May.

Yorke Bay was heavily mined as it was anticipated to be the likely site of a British landing due to its proximity to both the capital, Stanley, and the airport.

In actual fact, UK troops approached Stanley from land – meaning the mines remained undetonated in the ground – as part of a land, air and sea assault.

Argentina surrendered on June 14, bringing to an end the 74-day conflict that killed 907 people.

Rival claims to the Falkland Islands continue to hamper British-Argentine relations and tensions periodically flare up depending on the leadership of the two countries.

The expansion of sand dunes on the beach complicated plans to remove the mines for years, with shifting sands meaning some explosives could be buried even deeper while others were brought to the surface.

The uninhabited beaches have become something of a wildlife refuge for the local Magellanic penguins.

The birds, which are too light to set off the mines themselves, have flourished in the absence of human activity and have become a draw for tourists who were able to view them from a distance.

Princess Anne’s visit to the island came as her son-in-law continued to share stories about his experience in the royal family on I’m A Celebrity.

During the programme last night, Mike discussed staying over at Buckingham Palace – admitting he strolled the royal residence in ‘jeans and a tee’. 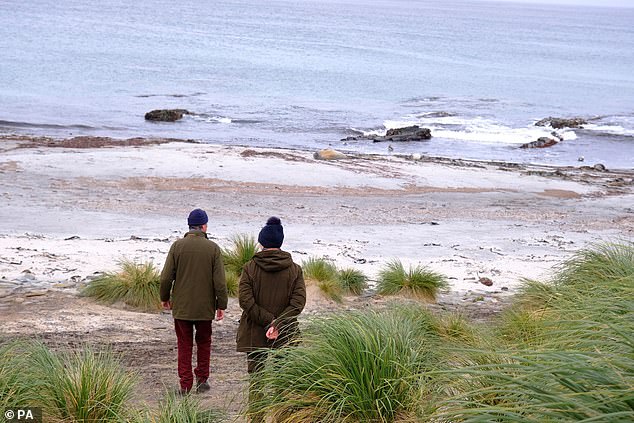 Meanwhile he also spoke about meeting his wife Zara for the first time, and saying he knew who she was because of Anne – who is patron of Scottish rugby.

Earlier in the series, he revealed how he once ripped his trousers and showed his underwear which read ‘nibble my nuts’ while performing a ‘sl*t drop’ dance move in front of Anne.

Speaking to MailOnline, royal experts speculated that Anne may be ‘horrified that Mike is talking about her in such a distasteful and inappropriate way’ – but added Tindall is a ‘laddish persona’ who ‘can get away with almost anything’.

Royal commentator Richard Fitzwilliams said: ‘It is all a bit outrageous, but he has read the national mood and, at a time of economic crisis, has added to life’s jollity. However, no other member of the Royal Family would get away with anything like this and they would be very, very unwise to try’. 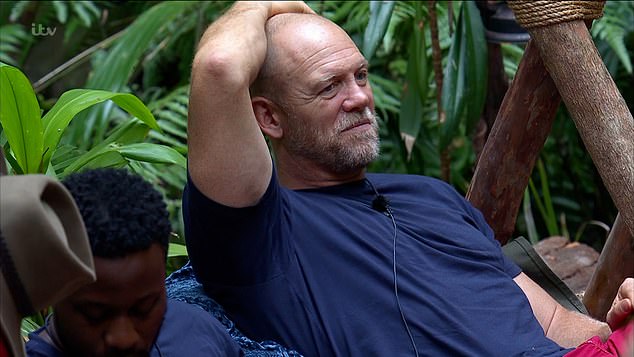 Her trip comes as her son-in-law Mike Tindall continues to compete on I’m A Celebrity… Get Me Out Of Here! 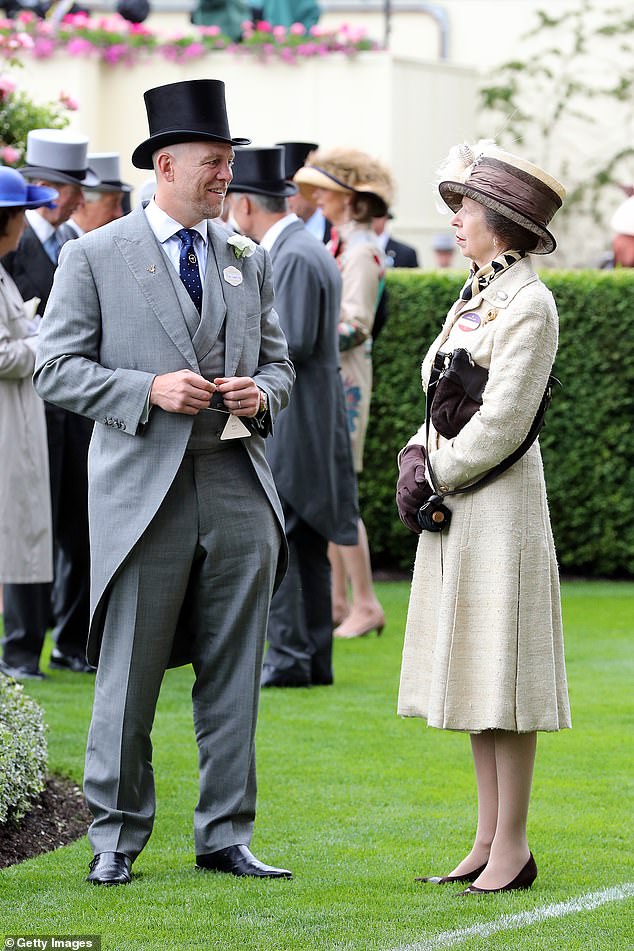 Royal expert Angela Levin, whose most recent book is Camilla: From Outcast to Queen Consort, speculated that Anne ‘is horrified that Mike is talking about her in such a distasteful and inappropriate way’

Angela Levin, author of Camilla: From Outcast to Queen Consort, said Tindall could be given a ‘b*****king’ when he leaves the jungle, adding: ‘I think she will be very upset that he’s spoken about her in that way.’

‘People have to remember that Mike is a member of the Royal Family, and he’s been good for them and they’ve been good for him,’ she said. ‘He goes to ceremonies and big events as a member, and I think it’s a real shame he’s talked about the Princess Royal like that.

‘I think he’s lost sense of what’s sensible or appropriate. You can see how it happens, because you’re sat in the jungle with nothing to do most of the time except take part in those disgusting challenges every now and then. Otherwise it’s a lot of time just sat around talking to quite famous people with strong personalities. And I think perhaps Mike has let loose, not remembered that the cameras are on you all the time, recording all the time, and then spoken about his mother-in-law in that way.

Chef Tom Kerridge reveals he gets complaints for being a ‘grumpy’ judge on the...

Dem Eric Swalwell releases ad showing a woman getting arrested at gunpoint for having...

As scientists find link between storms and asthma, how you could fall prey to…...