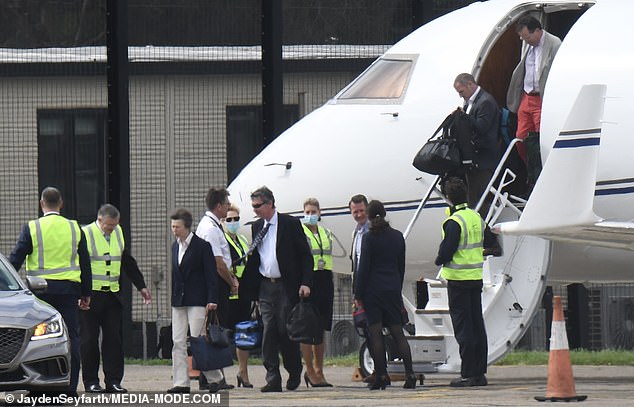 Princess Anne proved she has plenty of stamina left today after an intense four-day-visit to Australia and Papua New Guinea.

The 71-year-old Princess Royal made a brief stop at Sydney Airport today after arriving by private jet from Papua New Guinea, where she concluded a whirlwind tour of the Southern Hemisphere.

Anne, who travelled with her husband Vice Admiral Sir Timothy Laurence, 67, impressed royal aides with her sense of duty this week, which saw her rack up more than 20 engagements in four days.

Now preparing to get back home to Gatcombe Park, indefatigable Anne, who completed the trip without assistants, makeup artist or hairdressers, and was seen carrying her bags herself out of her private jet. 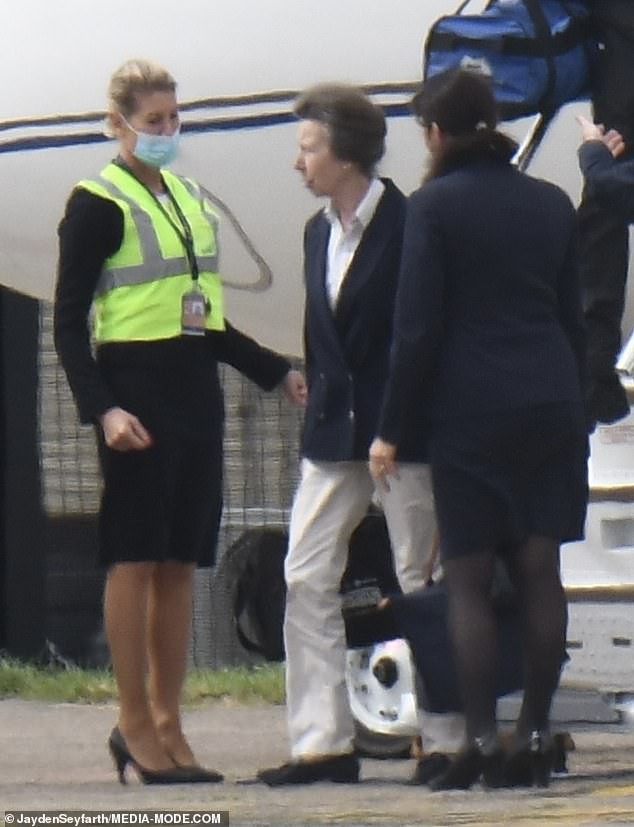 Anne, who travelled with her husband Vice Admiral Sir Timothy Laurence, 67, impressed royal aides with her sense of duty this week, which saw her pile on as much as 20 engagements during her two-day visit to Papua New Guinea

The Queen’s only daughter picked a stylish and practical look for her jet-set outfit.

She paired cream trousers with a navy jacket she wore over a white crisp shirt.

No-nonsense Anne also picked a comfortable pair of brown slip-on shoes for her journey, and had a navy Longchamp bag as her cabin luggage, along with a smaller leather handbag for her essentials.

She was also seen carrying what appeared to be a black laptop case, after possibly catching up on emails on the flight. 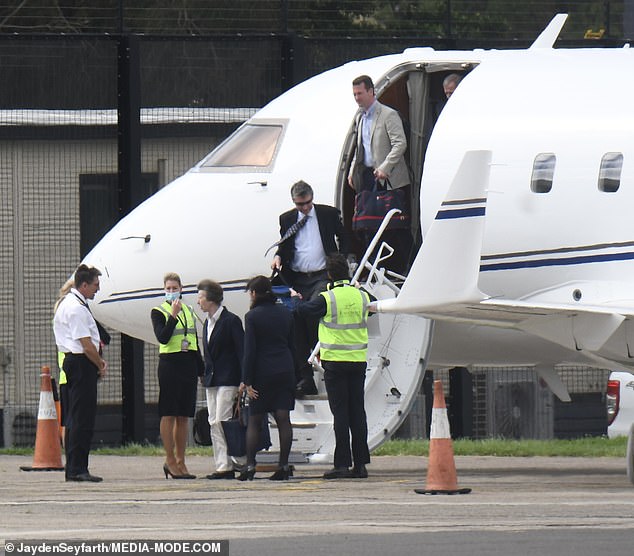 A chauffeur was there to welcome Anne and Sir Tim on the tarmac in Sydney, but the royals carried their own luggage

Her hair was coiffed into a bun, tied together at the back of her head, and Anne still took the time to accessorise with a pair of pearl earrings.

Her husband, Sir Tim, opted for dark grey slacks with a black jacket and white shirt. He was also wearing a pair of sunglasses.

In spite of her demanding schedule this past week, the Princess Royal looked fresh-faced as she stepped onto the tarmac.

Anne gave other working royals a run for their money this week, jumping from one engagement to the next while getting very little sleep. 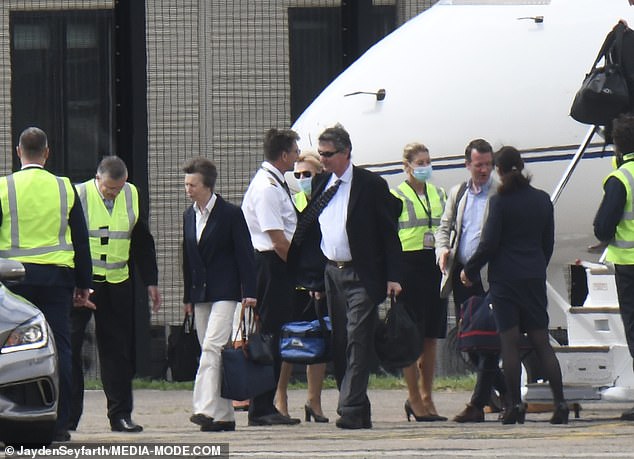 Anne was wearing a pair of cream trousers, paired with a navy dress and a crisp white shirt, as well as a navy Longchamp bag

The Princess Royal left the aircraft with both her bags in each hand. She hopped down the stairs holding the bags 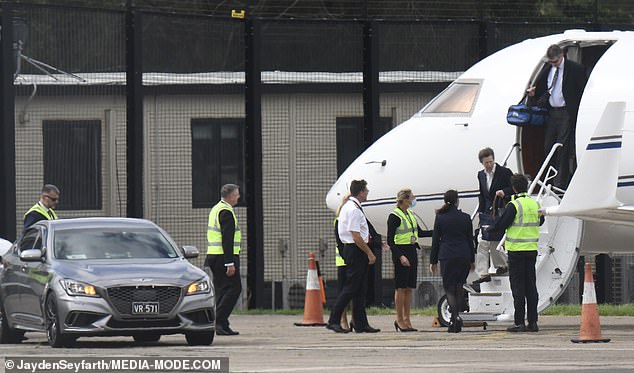 In spite of piling on engagements this week, Anne and Sir Tim did not put their foot down when they made a quick stop in Sydney

She impressed the royal household this week, travelling almost 25,000 miles in four days, piling on a total of 20 engagements, all while staying at £185 a night hotel with just one member of her staff present – alongside her security detail and husband.

The Daily Mail’s Royal Editor Rebecca English reported that Anne packed her own suitcase, did her own make-up and her own hair throughout the tour, which saw her display remarkable stamina.

Despite being past the UK retirement age, she was on her feet from 11.30am to 6.30pm at the Royal Agricultural Society of NSW’s Bicentennial Sydney Royal Easter Show.

And she caught just a few hours sleep after dinner with the Prime Minister of Papua New Guinea, before getting on her flight home. 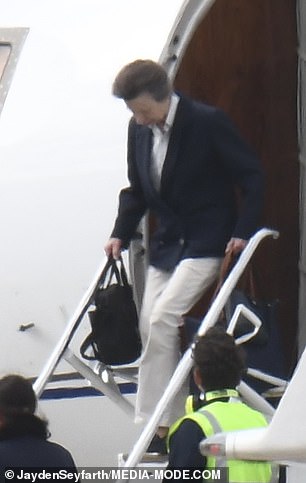 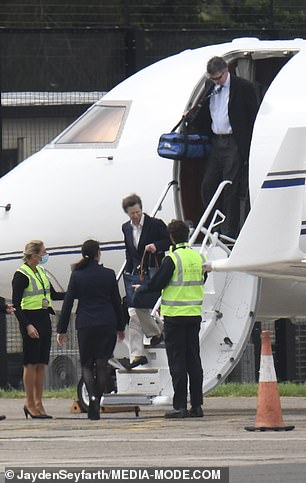 Princess Anne has been doing her own makeup and her own hair on the journey. She packed her own suitcase and made sure to travel light, pictured 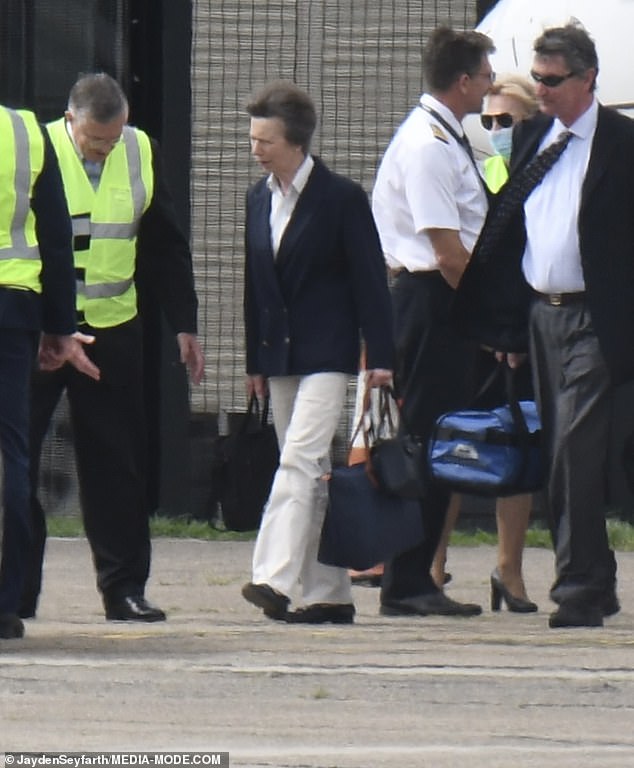 Sir Tim Laurence was wearing dark grey slacks with a white shirt and a black jacket. He also sported a pair of sunglasses 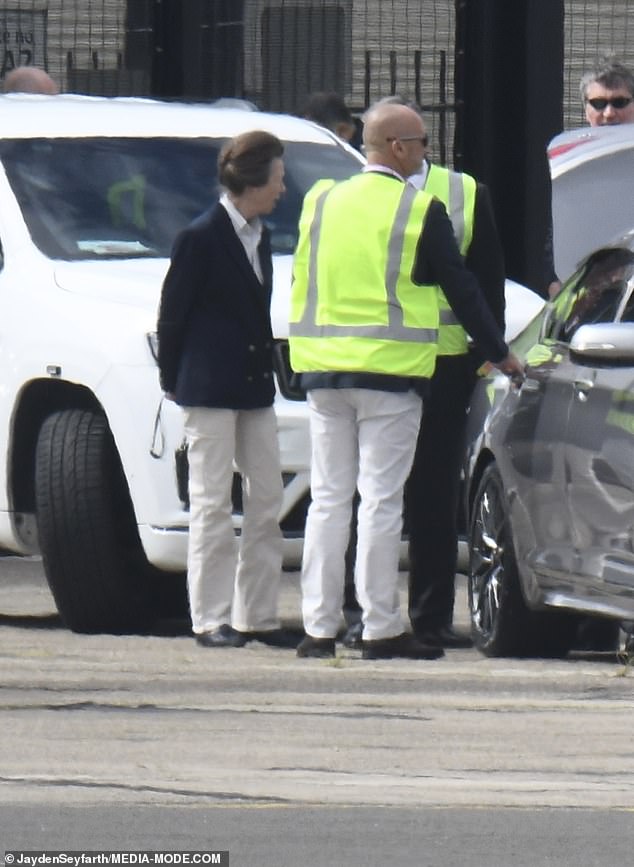 After her carry-on bags were loaded in her car, Anne chatted with her chauffeur before driving off

‘It’s quite unbelievable,’ said one, ‘she literally hadn’t stopped flogging herself from the moment she left the UK. And to think she will turn 72 this summer. Remarkable.’

Her trip is the first time a British royal has visited Australia since Harry and Meghan’s tour in 2018, with the coronavirus pandemic preventing any for the past two years.

The royal visit is part of the line-up of celebrations to mark Her Majesty’s 70 years on the throne including, Trooping the Colour, a Service of Thanksgiving and a concert at Buckingham Palace. 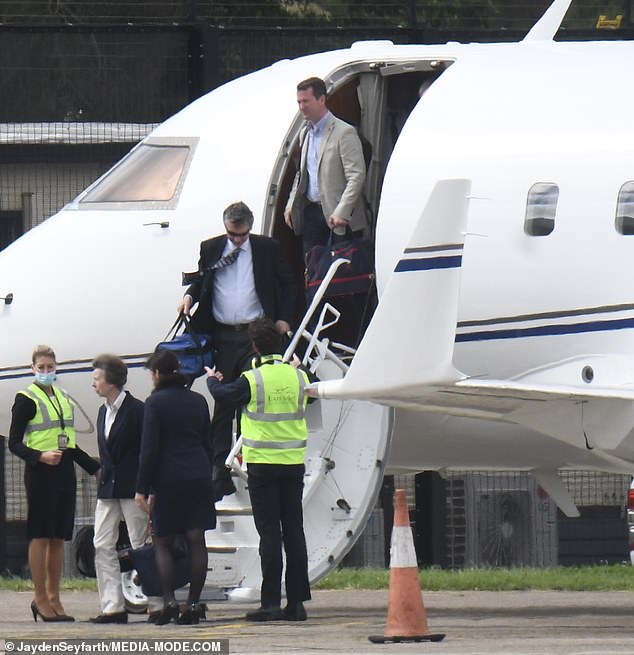 Sir Tim, who is reportedly as down-to-Earth as Princess Anne is, was also carrying his own luggage 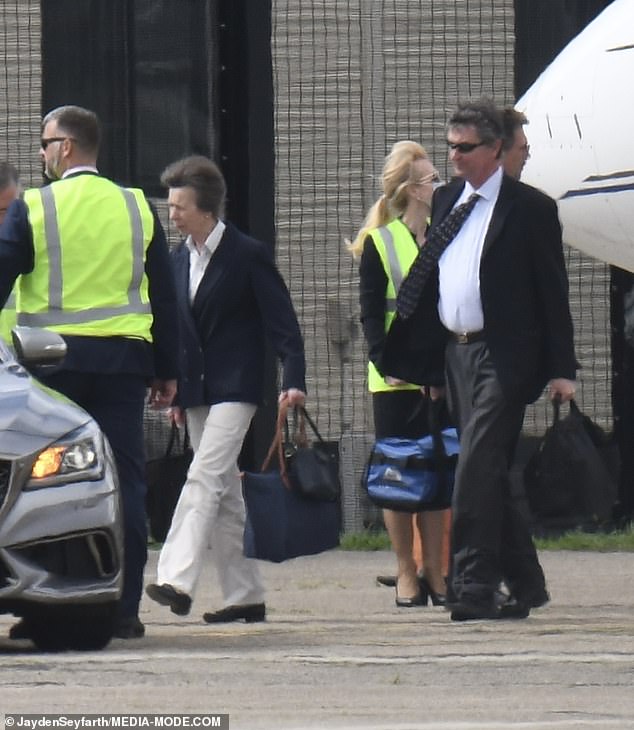 After a whirlwind visit of Australia and Papua New Guinea, the couple will be headed to the UK today

Commonwealth Bank only Australian bank yet to pass on Reserve Bank May 2022 rate...

Ben Affleck and Jennifer Lopez enjoy steamy PDA in car where she flashes THAT...