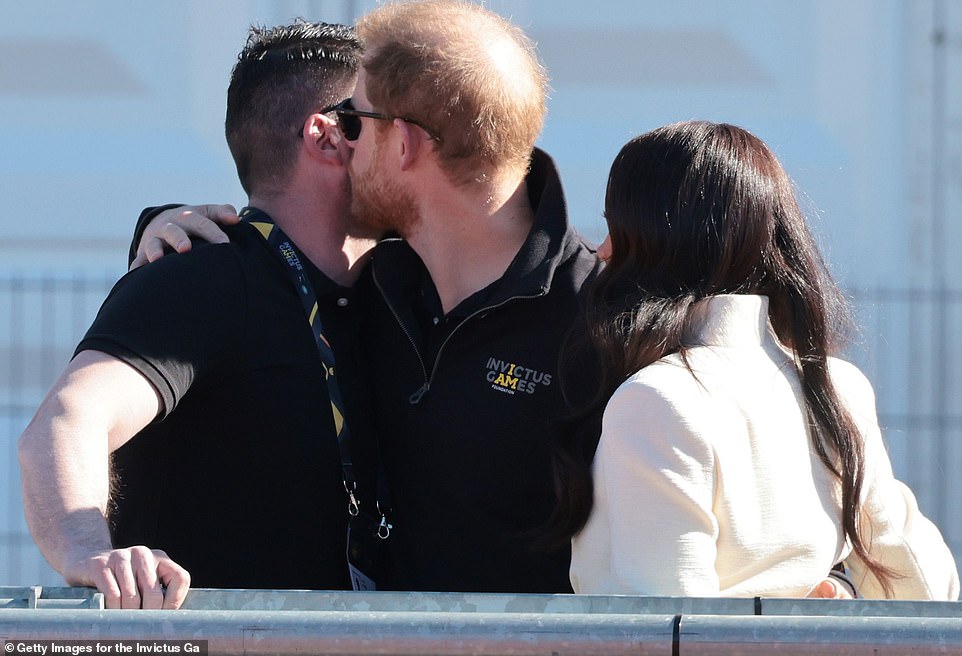 Prince Harry enjoyed an emotional reunion with one of his closest Invictus Games colleagues this morning.

The 37-year-old Duke of Sussex, who is attending the Games with wife Meghan Markle in their first European appearance since ‘Megxit’ in 2020, offered a warm embrace to Paralympian and Invictus Games trustee David Henson on Easter Sunday following the opening ceremony last night.

Henson, also 37, is a former Royal Engineer who lost both of his legs in 2011 when he stood on an IED during an attempt to clear a building of mines in Afghanistan so locals could return.

He’s long been a close ally of the Prince – and his daughter Emily, then two, famously stole the Duke’s popcorn at the Invictus Games in 2017.

Prince Harry offered a warm embrace and a kiss to Paralympian and Invictus Games trustee David Henson on Easter Sunday as Meghan Markle looks on; the couple are making their first European public appearance since 2020 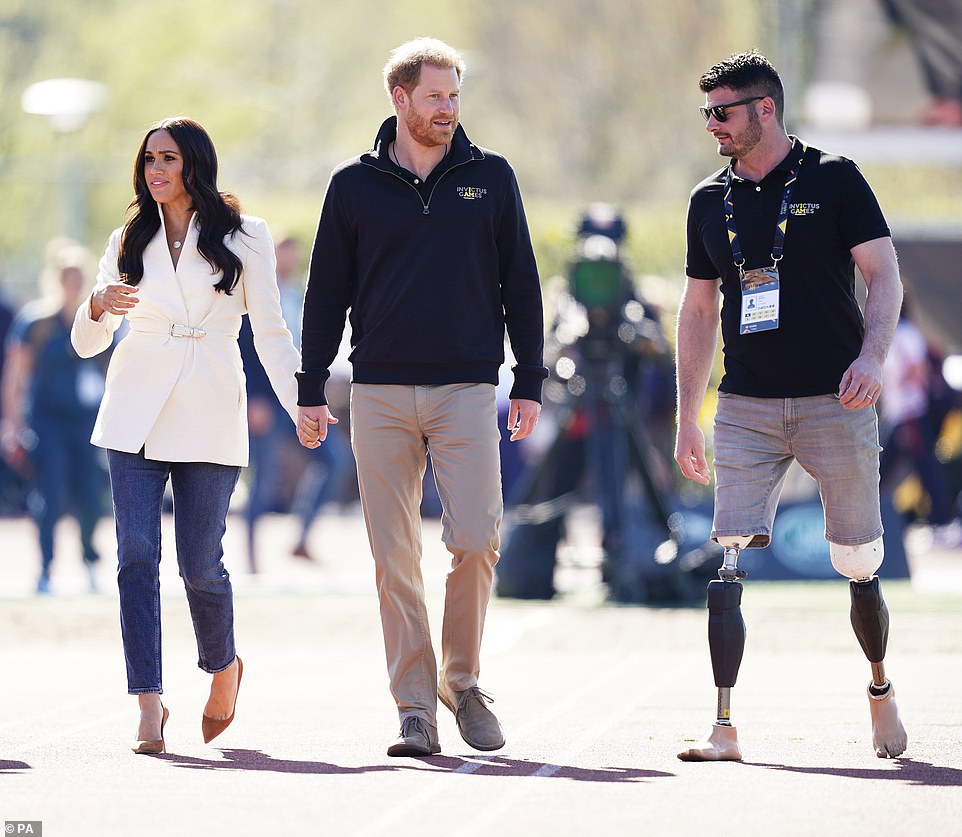 Reunited: Ex Royal Engineer Henson lost both of his legs in 2011 when he stood on an IED while serving in Afghanistan; this morning he walked alongside Prince Harry and Meghan Markle as they arrived for day two of the Invictus Games 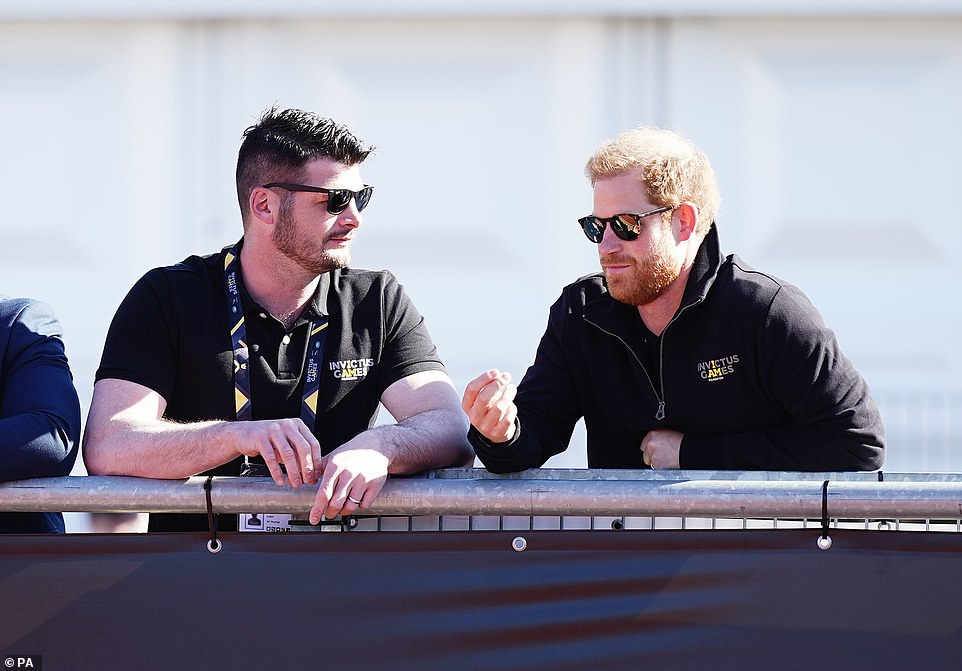 The two men, both wearing branded Invictus clothing and black sunglasses, enjoyed an emotional reunion at the latest Games in The Hague, with Prince Harry offering a kiss and a hug to his friend 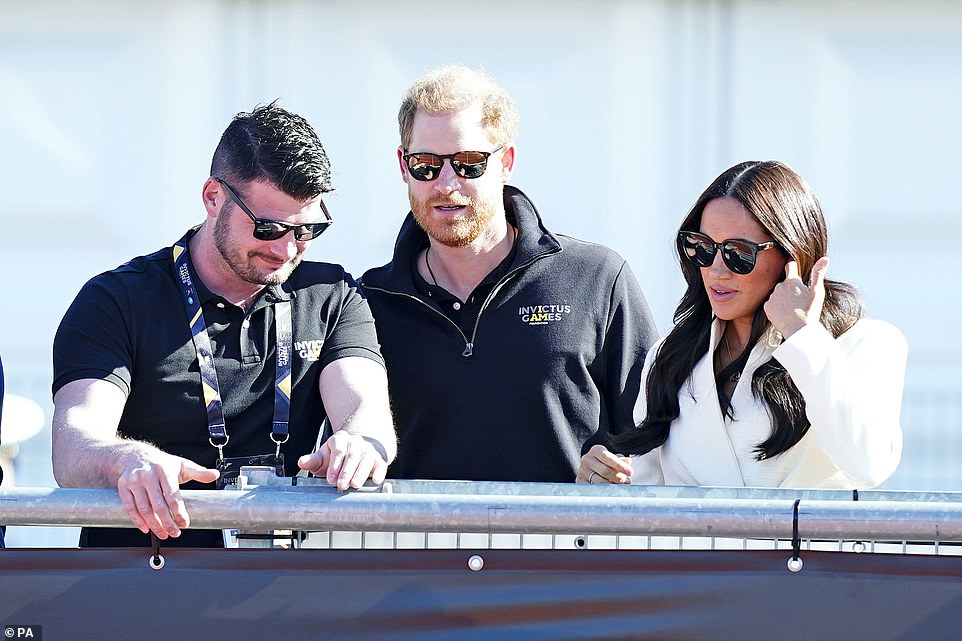 The trio chatted ahead of walking in to watch the latest events at the Games, which Prince Harry helped to found in 2014

Both men wore casual sportswear bearing the Invictus Games branding and black sunglasses as they were reunited in the Dutch sunshine at the Zuiderpark arena this morning.

Prince Harry, 37, leaned in to offer his friend a hug and a kiss, before the Duchess of Sussex also gave former Royal Engineer Henson a hug.

On Sunday morning, Meghan swapped the glamour of her off the shoulder white gown at the opening ceremony for a more casual look with jeans, a white wrap around coat and a pair brown suede stiletto shoes.

The trio then chatted ahead of walking in to watch the latest events at the Games, which Prince Harry helped to found in 2014.

In 2017, Henson’s then two-year-old daughter Emily stole hearts as she cheekily stole Prince Harry’s popcorn while he was chatting during the last Games in Toronto, Canada. The event also signified Harry stepping out for the first time with his future wife.

David and wife Hayley feared they may never have children after the former Royal Engineer’s life changed forever in 2011. However, as he lay in a military hospital shortly after the blast, the Army took his sperm and froze it, so that he might have children in the future if he wanted.

He later said it was not something he gave much thought to at first, but, after marrying his wife Hayley, the couple decided to try for a child through IVF and it worked first time. 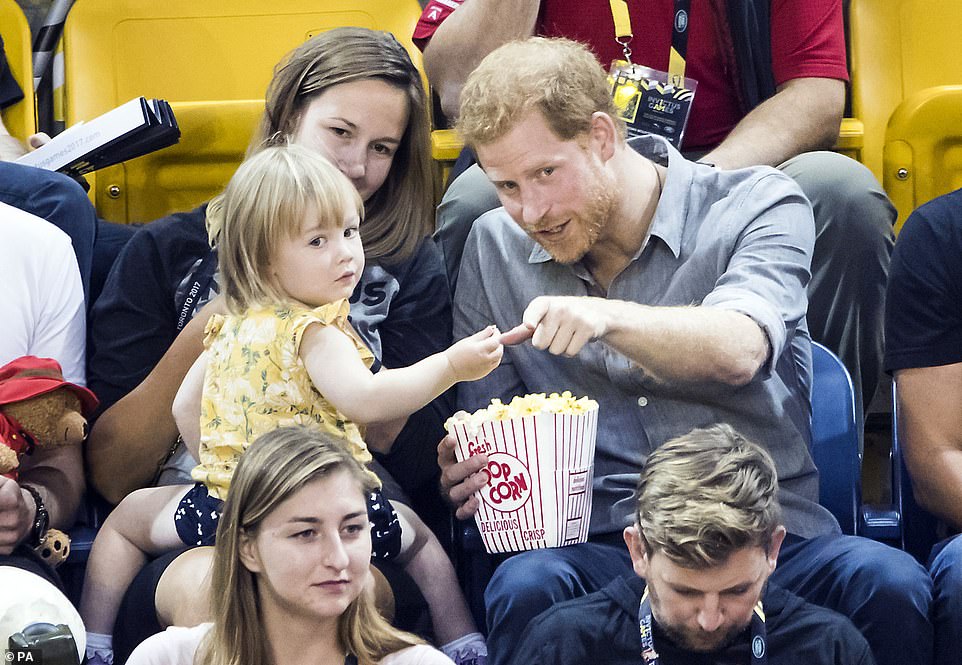 In 2017, Henson’s then two-year-old daughter Emily, pictured sitting with mum Hayley, was famously caught on camera stealing the Duke’s popcorn at the Invictus Games 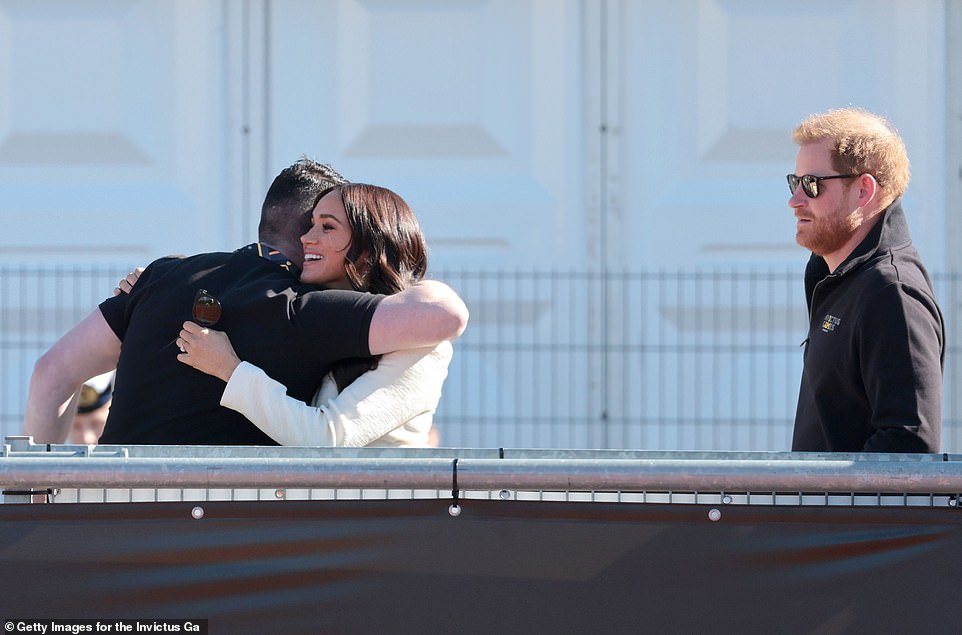 The Duchess of Sussex also gave former Royal Engineer Henson a hug on the second day of the Games, which are currently taking place in the Netherlands 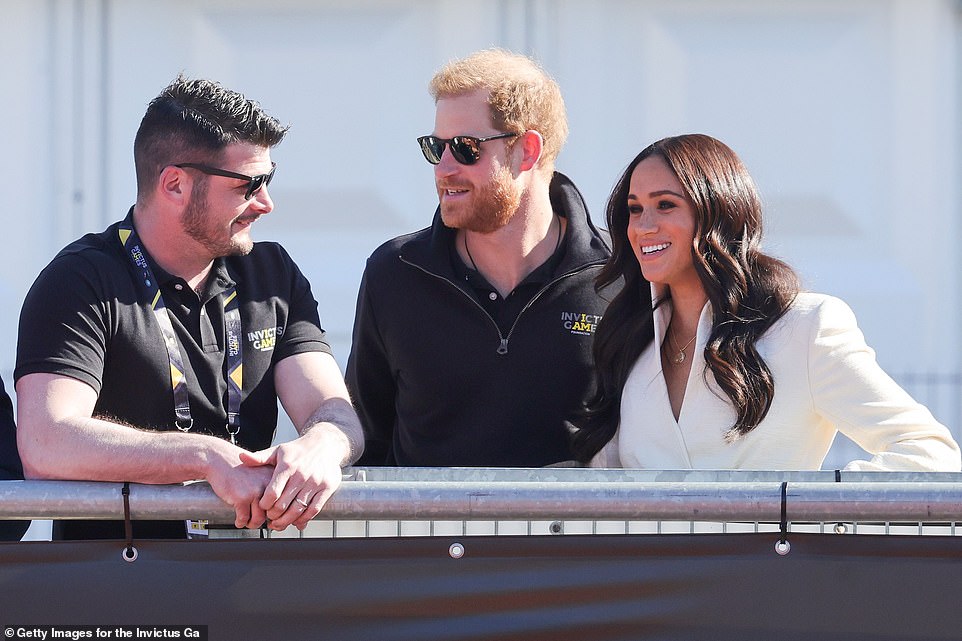 The Sussexes, pictured chatting with David Henson, are being protected by a security team of five during the Invictus Games, with a burly bodyguard seen as a constant companion during their time at the Zuiderpark in The Hague 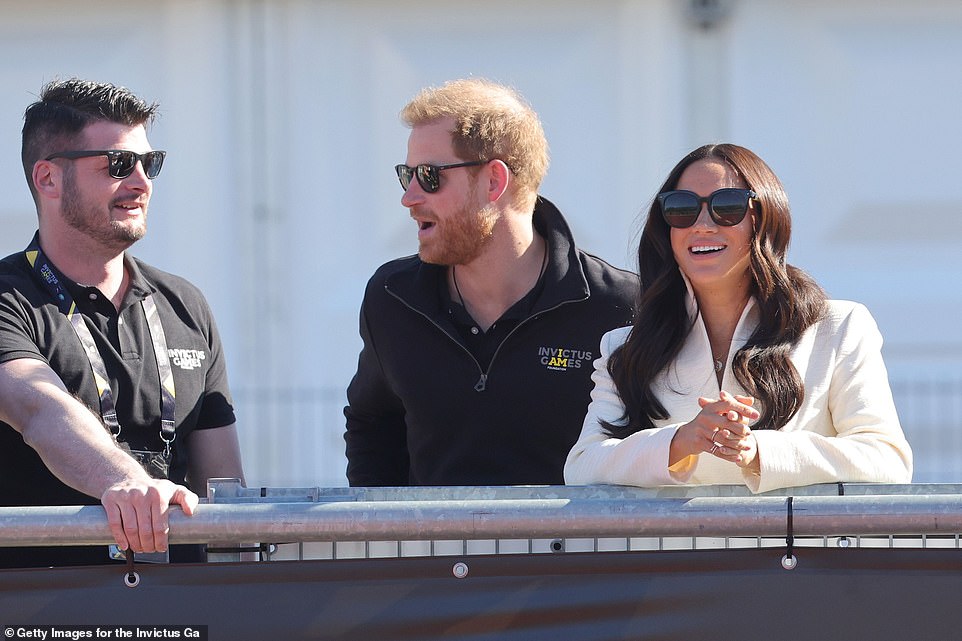 Prince Harry and Henson, both 37, looked happy to be in each other’s company as they prepared to watch a second day of events

In the dark days after the bomb blast, David had told Hayley she should find someone else who could make her happier than he could. But she stuck by him and he later said the birth of Emily made their relationship even stronger.

Shortly after Emily’s birth in 2015, David told the Daily Telegraph: ‘She was “with me” the day I was injured but she wasn’t born until four years later. As soon as she came along we realised what we had been missing: it was her.’

He credited the youngster with helping his recovery, telling of his joy at having someone to ‘love and care for and educate and guide’.

David, from Hampshire, was determined not to let his injuries stop him from living a full life and, just 10 months after the bomb blast, he put on running blades for the first time.

He has since competed at the Invictus Games, World and European Championships and he won a bronze medal for Great Britain in the 200-metre sprint in Rio in 2016. 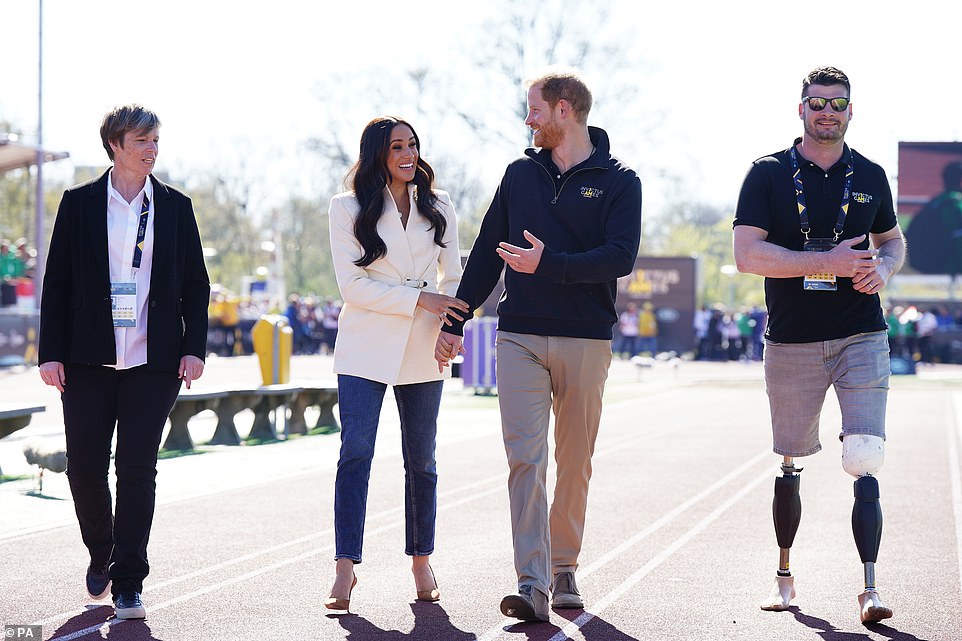 Meghan swapped the glamour of her off the shoulder white gown at the opening ceremony for a more casual look with jeans, a white wrap around coat and a pair brown suede stiletto shoes

The Sussexes are being protected by a security team of five during the Invictus Games, with a burly bodyguard seen travelling in their Land Rover as Harry drove himself to the athletics arena at the Zuiderpark in The Hague.

Meghan sat in the front seat while four bodyguards travelled behind in another Land Rover.

They leapt from the vehicle when Harry pulled over on to a grass verge outside the athletes’ entrance and formed a protective shield around the couple.

All five had earpieces but there was no visible sign of any firearms among the five. Harry and Meghan have been given VVIP (very very important person) status and protected by local police and members of the Dutch royal protection unit.

On Saturday, Meghan Markle made a subtle dig at the royal family after telling competitors at the Invictus Games they know what ‘service’ is, after taking a previous potshot at the Queen over the use of the word during the Megxit row.

The Invictus Games has been Harry and Meghan’s first public return to Europe since they quit as working royal.

The Games in The Hague was postponed in 2020 due to the pandemic.