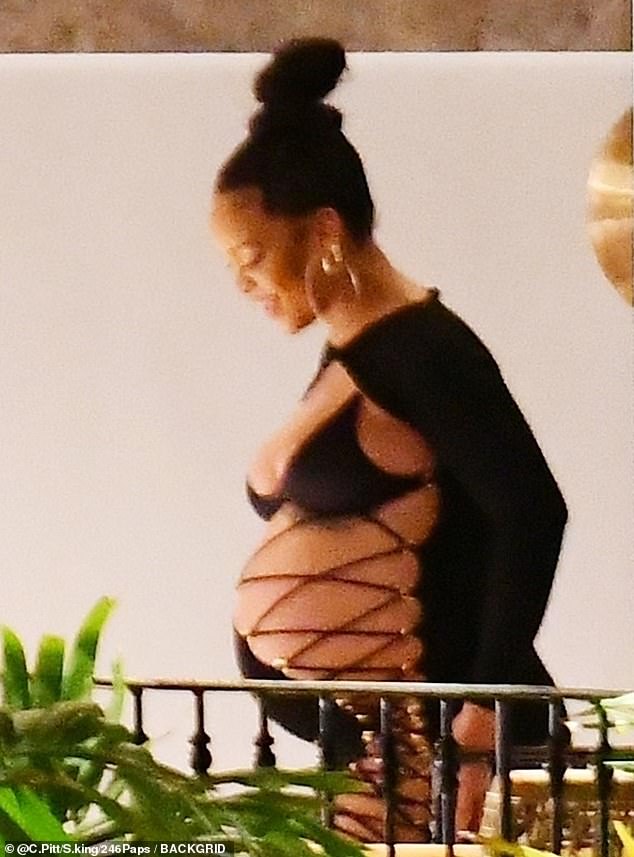 Rihanna‘s growing baby bump was back on full display as she dined out with boyfriend A$AP Rocky on Sunday evening after friends of the couple denied they had separated.

The singer, 34, drew attention to herself by embracing the current trend for cut-out panel dresses during a late night appearance in her native Barbados.

Rihanna’s form-fitting outfit accentuated her baby-bump while fully exposing her cleavage and stomach as she made her way into a local restaurant.

She’s expecting: Rihanna’s growing baby bump was back on full display as she dined out in her native Barbados on Sunday evening

The couple’s latest appearance comes after the couple were forced to deny claims of a split, prompted by his alleged infidelity.

The woman accused of having an affair with A$AP Rocky during Rihanna’s pregnancy has also fiercely denied the allegations.

Shoe designer Amina Muaddi took to Instagram on Friday to issue a statement after social media was alight with claims the rapper, 33, had cheated on the heavily pregnant singer, 34, with her.

She wrote: ‘I’ve always believed that an unfounded lie spread on social media doesn’t deserve any response or clarification, especially one that is so vile.

‘I initially assumed that this fake gossip – fabricated with such malicious intent – would not be taken seriously.

‘However in the last 24h I’ve been reminded that we live in a society that is so quick to speak on topics regardless of factual basis and that nothing is off limits.

‘Not even during what should be one of the most beautiful and celebrated times in one’s life. Therefore I have to speak up as this not only directed towards me but it is related to people I have a great amount of respect and affection for.

‘While Rih is continuing to live her serene, best dressed pregnancy life and I go back to my business – I wish everyone a beautiful Easter weekend!’

A source directly connected to both artists had earlier told TMZ that the cheating and split rumours were ‘100% false on both counts’, adding ‘one million percent not true. They’re fine.’

The drama started on Thursday when fashion blogger Louis Pisano tweeted: ‘Rihanna & ASAP Rocky have split. Rihanna broke up with him after she caught him cheating with shoe designer Amina Muaddi.’

He continued: ‘Amina was responsible for designing Fenty’s footwear offering and Rihanna is often seen in custom shoes from her own label.

‘ASAP & Amina is not new though as she was seeing him years ago and also collaborated with him on a collection of shoes. Things apparently hit the fan at Craigs in LA.’