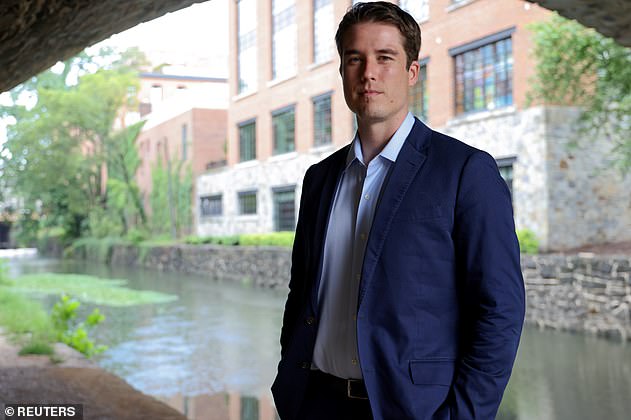 A former Miami pool boy has recalled of the first time he met and had sex with the wife of then-Liberty University president Jerry Falwell Jr., while he watched.

Giancarlo Granda was 20 years old and working as a pool boy at the iconic Fontainebleau hotel when he met an attractive woman posed poolside in a bikini, who began making moves on him.

It wasn’t long before he’d been invited up to her room for an after-work rendezvous, the catch being that her husband wanted to watch.

In the book, Off the Deep End: Jerry and Becki Falwell and the Collapse of an Evangelical Dynasty, Granda writes with co-author Mark Ebner that he was encouraged by his colleagues to embark upon what would become a years-long entanglement with the Falwells – arguably the most powerful couple in the Evangelical Christian community.

Giancarlo Granda, now 29, pictured, describes meeting Becki Falwell and hours later being in a hotel room with the married Evangelical couple as Jerry Jr. watched him and Becki have sex 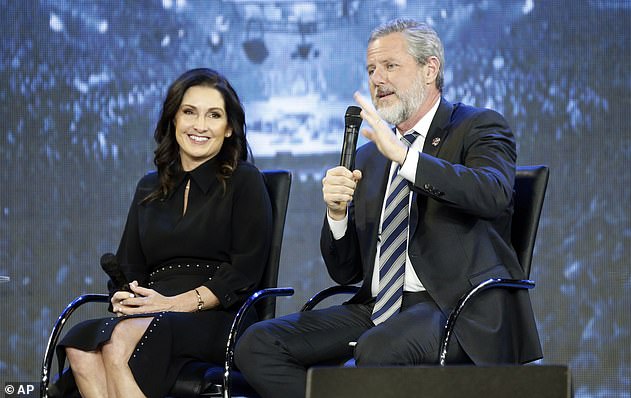 Becki (left) and Jerry Falwell Jr. (right) have repeatedly denied certain aspects of Granda’s recounting of the years-long affair between the three of them 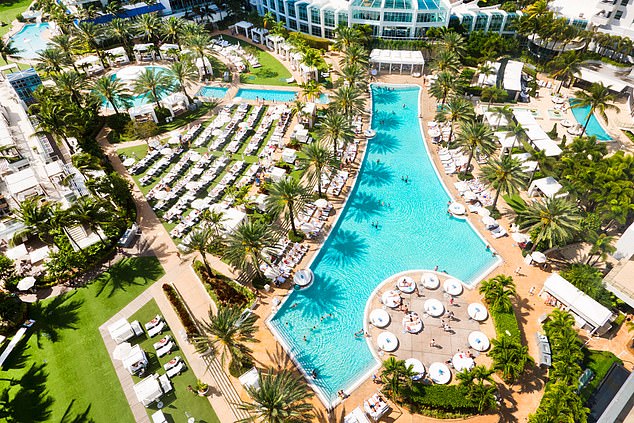 In March 2012, Granda, then 20, was a pool boy at the iconic Fontainebleau hotel in Miami, where he met Becki, then 44,  poolside one afternoon 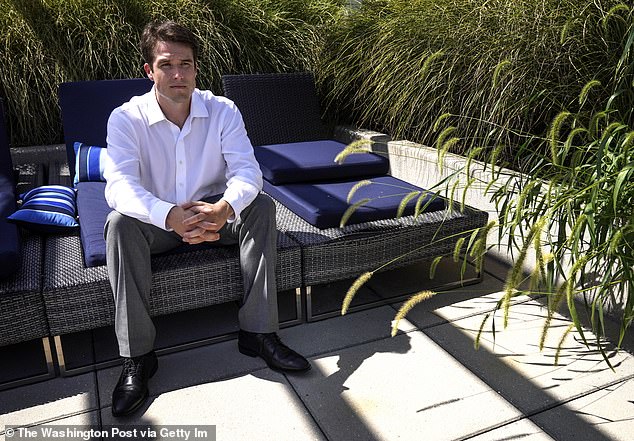 Granda is now releasing a book and a documentary about his more than half-decade entanglement with the Falwells. OFF THE DEEP END: Jerry and Becki Falwell and the Collapse of an Evangelical Dynasty is due out October 25

Granda describes meeting Becki Falwell, then 44, at a nearby Days Inn later in the night and having a drink with her before making their way back to a room where Jerry lay on a bed ‘dressed, but with his jeans unbuttoned and fanned open so you could see his underwear.’

‘It was awkward at first, but he was already drunk, and he greeted me with ‘Hey, Gian,’ and then let out a giggle. That was a little disconcerting,’ reads the excerpt, featured in Rolling Stone.

Granda then told the leader of the famed Evangelical Christian university: ‘If you get jealous at any point, just let me know and I’ll get the hell out of here. I will not hesitate.’

He writes: ‘I was still worried that he might attack me and stove in the back of my head. But he told me, “Don’t worry about it. You guys do what you want to do.”‘

He proceeded to describe kissing Becki and carrying her to the hotel bed.

‘She wasn’t wearing any panties, which is the kind of thing that makes an impression on you at twenty,’ he wrote, continuing to describe the encounter.

The two stopped short of penetrative intercourse and Jerry, according to Giancarlo, watched the whole time.

At one moment, Falwell evidently got too close to Giancarlo and Becki: ‘At some point, Jerry got up and walked to the side of the bed to get a better angle. I had a moment of near panic, thinking, what is he doing? and I told him to back off – not in a hostile way, just establishing some boundaries.’

‘He apologized and quickly walked back toward the entrance and stood right outside the bathroom. After that I was able to put blinders on and block him out,’ he writes.

‘Afterward, they were elated that we’d managed to pull it off. She was buzzing, electric, and Jerry continued to giggle with excitement. I was happy, but this was enough pathfinding for one day. I told them, ‘All right, guys – I’m outta here,” he wrote.

‘The next day, my cell phone rang as I was walking across campus. I picked up to hear Becki’s voice. ‘Hey, what’s up?’ she said. ‘You want to see me again before I leave?” 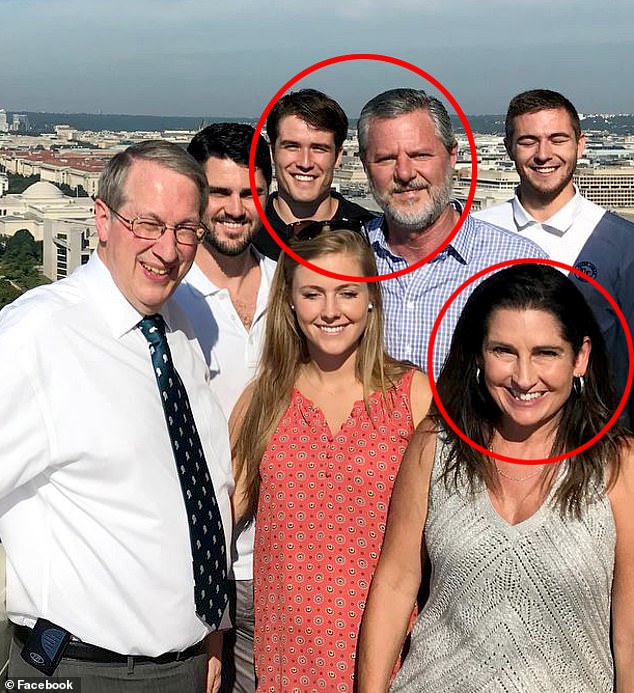 Pictured in 2018: Granda says his affair with the Falwells would last another half-decade 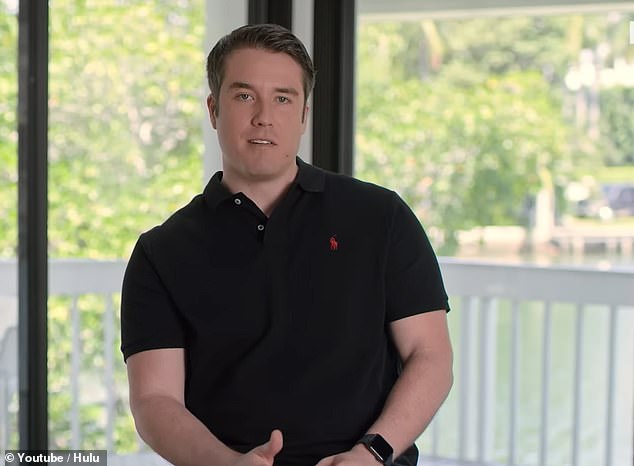 In a forthcoming Hulu documentary, Granda discusses how he found himself trapped in a seven-year affair with Becki Falwell and how the affair impacted every aspect of his life 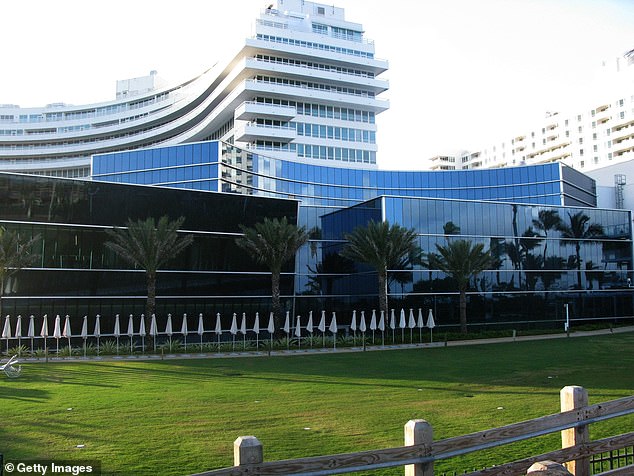 Liberty University in Lynchburg, Virginia is one of the largest Christian universities in the world 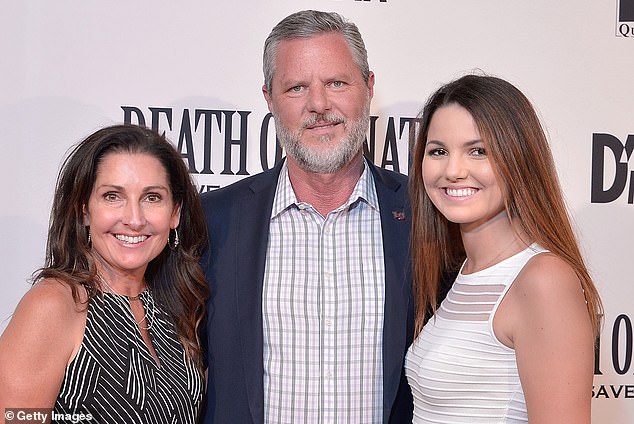 The Falwells with their daughter Carolina (right), whose bed Becki and Giancarlo alleged defiled together

Granda has also sat down for a forthcoming Hulu documentary about his scandal with the Falwells.

In God Forbid: The Sex Scandal That Brought Down a Dynasty, Granda shares even more details about his initial encounter with the royal evangelical couple.

For their part, the Falwells finally addressed the scandal in a 2022 Vanity Fair interview, in which Jerry Jr. denied having known about the affair at its outset.

Becki also said that despite her unfaithful behavior, the couple remains strong and together.

‘We’re together more than any couple you will ever meet in your life. He forgave me, and that’s what Jesus teaches, forgiveness,’ she said.

Liberty University, in Lynchburg, Virginia, was founded in 1971 by Falwell’s televangelist father, the Rev. Jerry Falwell.

The younger Falwell took over in 2007 before resigning in August 2020.

Today, the university boasts an online and on-campus enrollment that exceeds 100,000 students and holds those who attend to an exacting honor code.

‘Sexual relations outside of a biblically ordained marriage between a natural-born man and a natural-born woman are not permissible at Liberty University,’ the code reads.

Students  are also banned from engaging with media that contains lewd lyrics, sexual content and nudity.  They can also be fined $250 if they’re caught drinking alcohol.

Falwell’s resignation represented a remarkable fall from grace for a man who had been a potent force in American conservative politics.