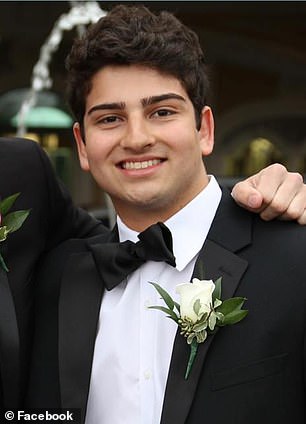 DailyMail.com can reveal the two fraternity boys being sued by the family of a 19-year-old University of Missouri student who was left blind and unable to walk or talk after being forced to down a family-sized bottle of Tito’s in one of the worst hazing incidents to date.

Samuel Gandhi and Alec Wetzler have been named as defendants now by the family of Danny Santulli, a teenager whose family say was forced to drink until his heart stopped last October during pledge month at Phi Gamma Delta.

In an amended complaint filed this week, the family detail how Gandhi and Wetzler targeted their son and then left him passed out on a couch where he stopped breathing momentarily after a night of brutal hazing.

Eventually, he was taken to the hospital but by then, he had suffered severe brain damage.

Now, he is at home in the care of his mother – who quit her banking job to take care of him full time. Doctors say he is not likely to ever walk or talk again.

Wetzler has been charged with supplying alcohol to a minor but no one else has been criminally charged over the incident. It is also unclear if the university has expelled the two latest defendants. 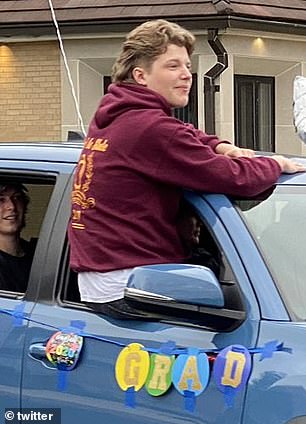 Samuel Gandhi (left) and Alec Wetzler (right) have been named as defendants now by the family of Danny Santulli, a teenager whose family say was forced to drink until his heart stopped last October during pledge month at Phi Gamma Delta 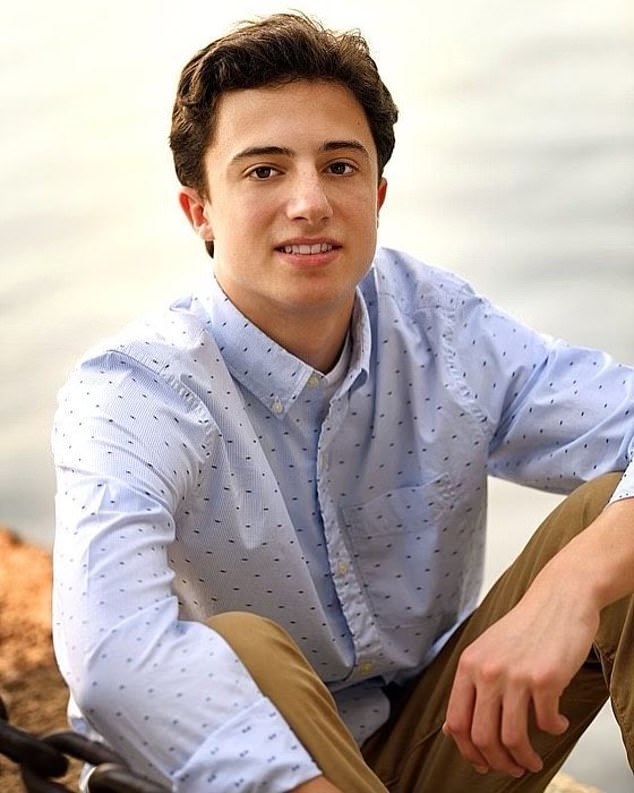 Danny Santulli (shown before the incident) is now blind and cannot walk or talk. His lawyer says his prognosis is ‘grim’ as a result of the brain damage caused by the hazing night in October 2021

Gandhi is an architecture student who is due to graduate next year. Wetzler is studying a BA in business administration.

The amended lawsuit against them details how they and others – who were previously sued and who settled those lawsuits – force-fed Santulli beer and gave him a family-sized bottle of Tito’s to drink.

‘This is the worst fraternity hazing case ever in the US in terms of injury. You can’t be any worse injured and still be alive

David Bianchi, attorney for the victim

When he passed out and went into cardiac arrest, they finally drove him to the hospital.

Now, he is unlikely to walk, talk or see again. His mother has quit her banking job to care for him full time.

According to the lawsuit, the pair wanted to make the night one ‘the pledges wouldn’t forget’ so filled the frat house with ‘cocaine, marijuana and alcohol’.

The new pledges had family-sized bottles of Tito’s taped to their hands and were branded ‘p*****s’ if they stopped drinking, according to documents reviewed by DailyMail.com.

The lawsuit also claims the boys were under caution from the school for a previous hazing incident at the time.

Wetzler has been charged criminally with providing alcohol to a minor but Santulli’s lawyer, David Bianchi, tells DailyMail.com the family wants him and others to be charged with hazing.

‘This is the worst fraternity hazing case ever in the US in terms of injury. You can’t be any worse injured and still be alive,’ Bianchi said.

He added that Danny’s prognosis is ‘grim’. 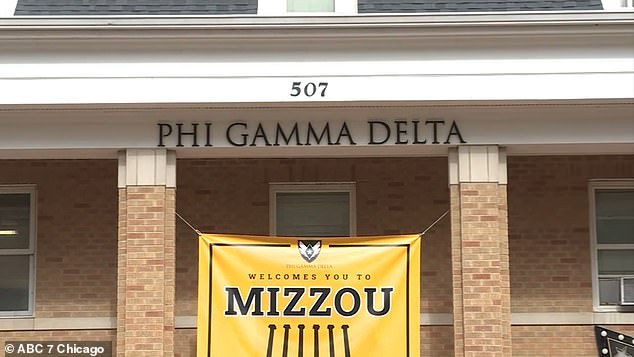 ‘He’s got massive brain damage, he’s blind, he cant walk.. it’s unlikely there will ever be any material change.’

The parents have settled a lawsuit with 22 defendants and the fraternity, who have now been banned from campus for repeated violations.

On Monday, Bianchi sought in a motion to add fraternity brothers Gandhi and Wetzler in an amended petition, which was approved by Judge Joshua Devine.= 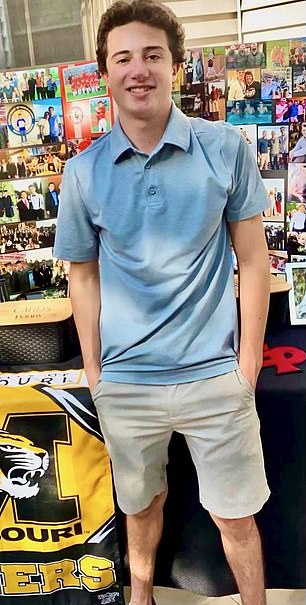 The lawsuit claimed that Santulli (pictured) and the rest of his pledge class were each forced to drink a bottle of hard liquor, given to them by their ‘pledge fathers’

According to the lawsuit, the fraternity brothers gave Danny a family-sized handle of Tito’s vodka and told him to finish it throughout the night.

He had, at that point, been at their ‘beck and call’ for a month as part of the grueling hazing process.

‘He was sleep deprived, was having to buy things for the fraternity brothers with his own money and was repeatedly ordered to clean the brothers’ rooms and bring food, alcohol and marijuana to them at all hours of the night.

‘Making matters worse, during the pledging process, Danny had been ordered to climb inside of a trash can that had broken glass in it,’ the lawsuit reads.

Two nights before the incident, Danny cried to his sister that he’d had enough, the lawsuit claims.

His family told him to quit the fraternity but he said he didn’t want to because he ‘wasn’t a quitter.’

On the night of the hazing, the lawsuit says Weltzer stood on a chair ‘looking for a target’ and spotted Danny. He then forced him to drink a beer via a tube, then made him return to his family-sized bottle of Tito’s.

The petition alleges Wetzler put a tube into Santulli’s mouth and poured beer down his throat, coercing him to drink an excessive amount of alcohol.

Gandhi then walked away from Santulli after initially trying to assist him when it was clear that the freshman was dangerously intoxicated, Bianchi claims.

He walked into the room at 12.17am and saw Santulli had not moved from where he left him, the lawsuit alleges.

The 19-year-old’s blood-alcohol content was 0.486 percent, more than six times the legal limit for driving. 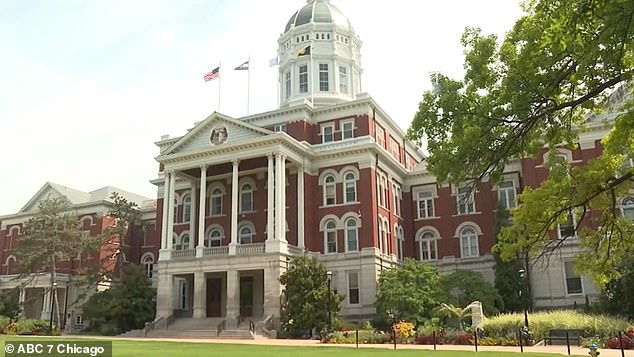 According to the lawsuit, the frat boys from The University of Missouri (shown) were already under caution for a previous hazing incident

The amended petition states: ‘At 12.28am, Danny slid partly off of the couch and ended up with his face on the floor but he had no voluntary control of his arms or legs and remained there until someone passing through the room saw him and put him back on the couch.

His skin was pale and his lips were blue, yet no one called 911′.

Instead, they drove him to the hospital in one of the other pledge’s cars where he was then taken into ICU.

Criminal charges have been filed against Wetzler for misdemeanor counts of supplying alcohol to a minor and possession of alcohol by a minor.

Fraternity member Ryan Delanty had been designated Santulli’s ‘pledge dad’ at the hazing.

The friend replied asking what had happened and Delanty answered: ‘I left him’.

Delanty was previously sued along with 23 others. That lawsuit was settled for an undisclosed amount.

Dancing On Ice 2023: Michelle Heaton becomes 10th celebrity to sign up for hit...