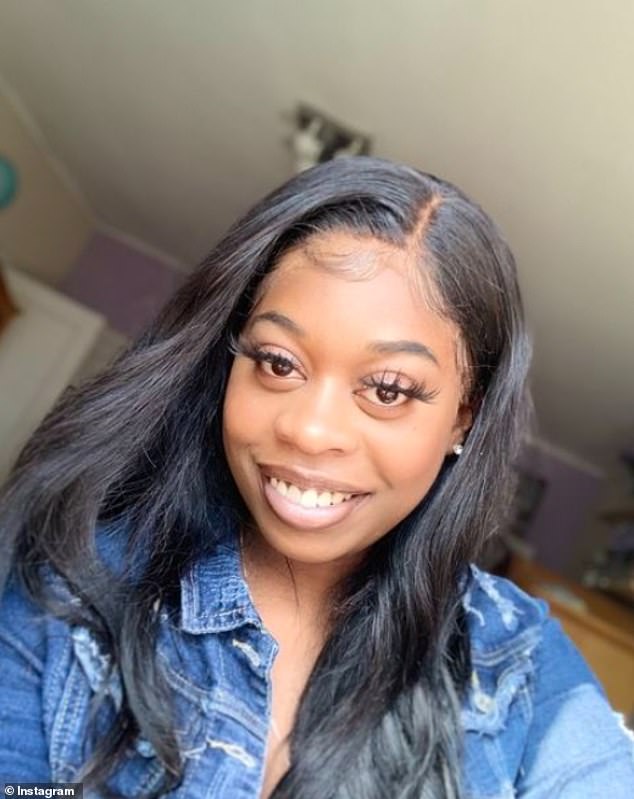 A New Jersey city employee who was run over in a road rage attack while attempting to record a SUV’s license plates has been named and pictured.

Morgan Scott, 23, was left with a broken spine and severed liver after Vincent Jean allegedly mowed her down three times.

The family is now fundraising for her medical costs after her insurance company said her injuries were ‘intentionally inflicted’.

Jean was allegedly caught on camera ramming Scott with his Mitsubishi SUV several times during his rampage on Tuesday.

He was arrested and charged with first-degree attempted murder and third-degree assault by auto.

Scott’s father wrote on Instagram on Saturday: ‘Recently my daughter endured a horrible attack on her life but God was merciful and spared my daughter from death.’

He warned someone had set up fake GoFundMe pages to scam donations for his daughter, and shared that the only official one was his.

‘Thank you for your love and support she is recovering God is good! God is Good!!!!!’

Shocked onlookers today told how the SUV flattened her after a crash further up the road in Elizabeth, New Jersey.

Isaac, a witness, who did not want to give his second name, said ‘she should never have survived’ the horrendous ordeal.

He and his wife, a retired nurse, raced to help the victim and said she whispered ‘thank you’ when they placed a blanket over her.

Morgan Scott, 23, was ran over three times by Vincent Jean in Elizabeth, New Jersey, on Tuesday 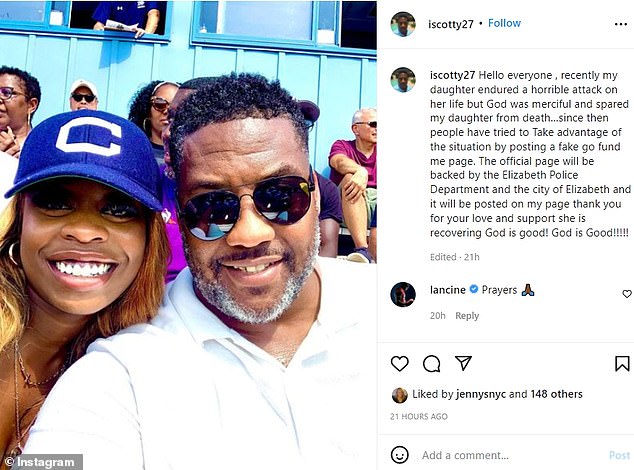 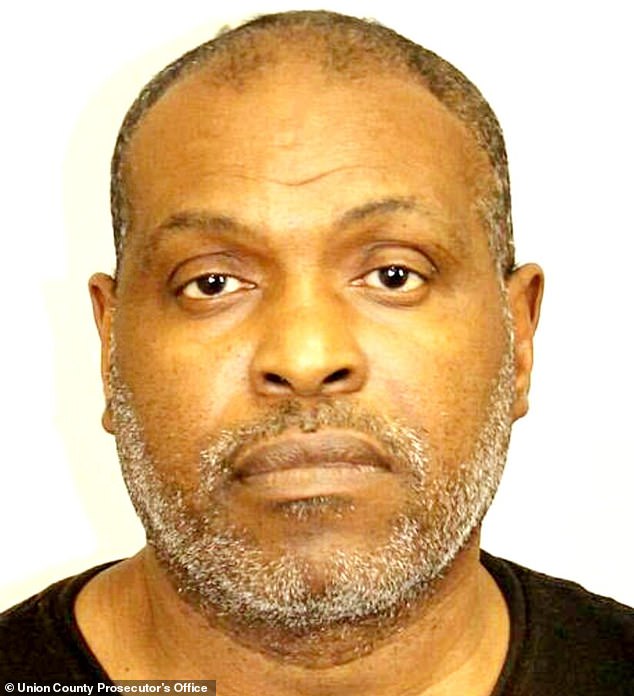 Vincent Jean (pictured), 56, from Irvington, New Jersey, shared a number of videos from the game on his social media accounts 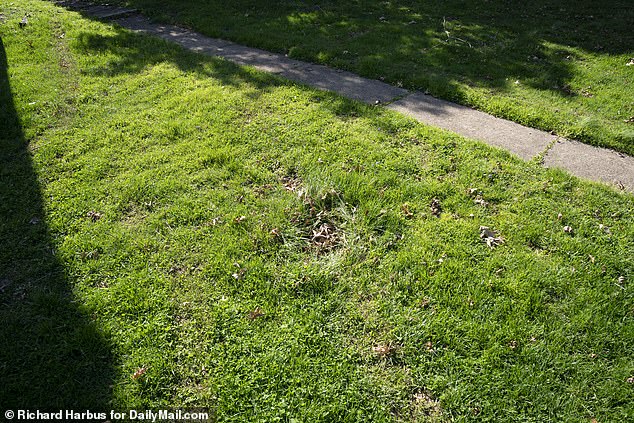 Shocked onlookers today told how the SUV flattened her after a fender bender further up the road in Elizabeth, New Jersey

It comes after DailyMail.com revealed Jean, 56, was obsessed with Grand Theft Auto and posted numerous clips of the video game on his social media.

The Scott family said they were devastated at the ‘atrocious’ attack and added it was ‘not the result of any domestic dispute’.

Isaac, who watched the attack unfold from his home over the road, said the woman was battling a fractured spine and severed liver in hospital.

He told DailyMail.com: ‘I walked out and saw the school bus stopped. People were running and screaming and it was just crazy.

‘I saw the lady was lying on the grass across the street. I looked at this woman and it was just awful.

‘We took a blanket as the grass was really still wet and I asked my wife – who was a nurse – if she was alive.

‘She said the woman said ”thank you” to her when she passed it over. Every time I look at the video it makes me feel sick.

‘By the last time she got run over she looked completely out of it on the ground. She should never have survived that.’

It comes after DailyMail.com revealed Jean, from Irvington, had shared a number of videos from Grand Theft Auto on his social media. 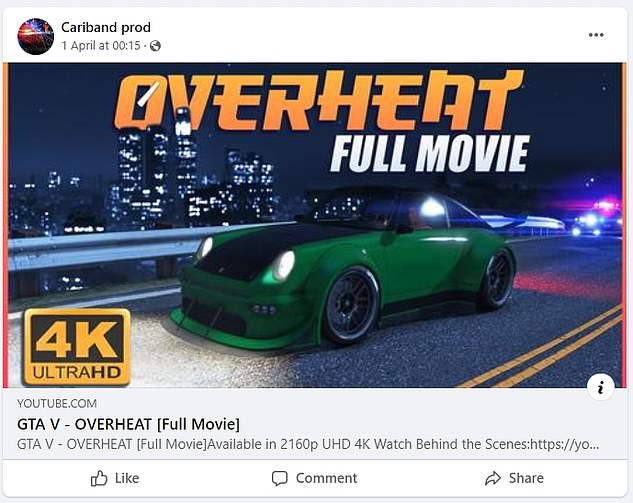 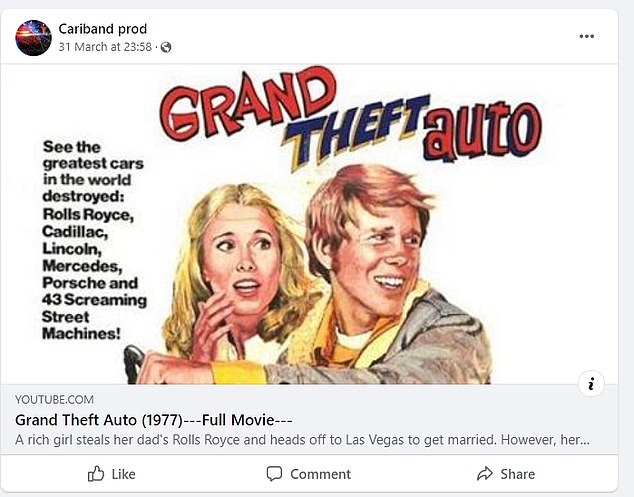 In one post he shared images of the main characters from the game showing how they evolved.

The late night posts over a number of years came before the vicious attack on Scott.

Shocking footage showed the SUV turn off the road before accelerating over the sidewalk as Scott runs away in terror.

But the vehicle easily caught up with her and she disappeared from view as only her screams could be heard.

The car mowed her down and continued to drive with her underneath on a stranger’s front garden. 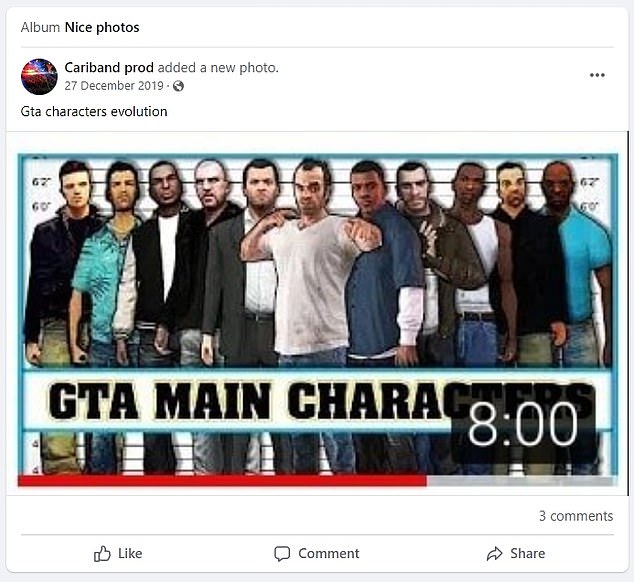 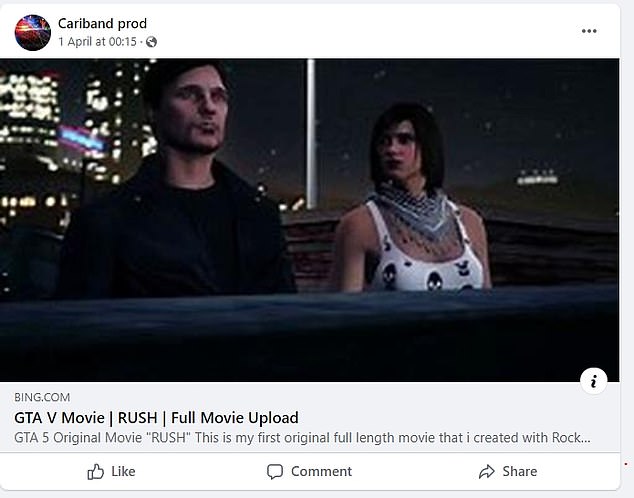 He appeared to be a huge fan of the Grand Theft Auto video game, with numerous posts on his Facebook about it

Jean then reversed and Scott briefly reappeared on the grass, barely moving.

He then revved his engine and launched another vicious attack on her – despite his victim lying still.

Onlookers, including the cameraman, screamed ‘stop, stop’ but the driver continued to drive over her.

He honked his horn as he made it over her for a second time before finally coming to a halt.

She was rushed to hospital and was reported to be alive and in a critical condition after at least one surgery.

The suspect fled the scene but Jean was later arrested and charged with first-degree attempted murder and third-degree assault by auto, prosecutors said.

The attack reportedly started when the pair locked horns over a minor traffic incident further up the road.

The driver was said to have tried to flee but the woman pulled out a camera and started taking pictures of his vehicle and following him up the street. 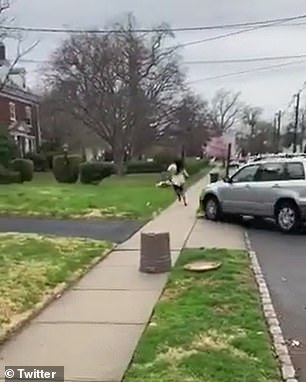 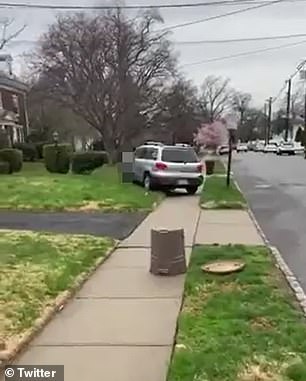 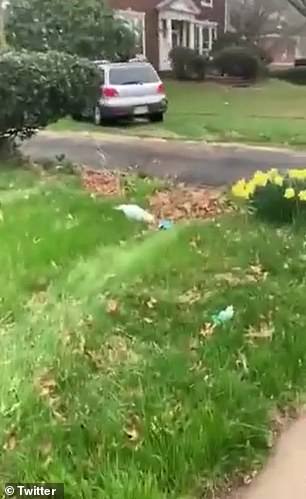 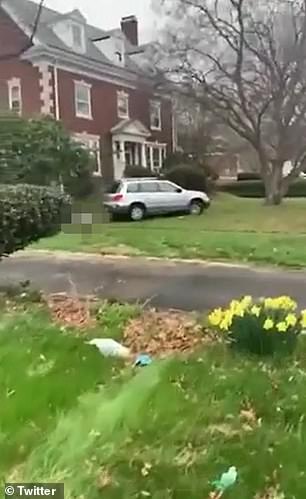 The victim’s family said: ‘The family would like to express its gratitude for the expedient response to this incident by the Union County Prosecutor’s Office, the Elizabeth Police Department, EMS workers as well as Elizabeth Mayor, Chris Bollwage.

‘We also want to thank the citizens of Elizabeth for their aid and support, especially the school bus driver who intervened and the neighbor who provided the security camera footage of this horrific crime.

‘Your actions and cooperation with law enforcement led to the quick apprehension of the perpetrator.

‘These collective efforts along with the hard-working and diligent actions of the doctors and healthcare professionals at University Hospital, saved our daughter’s life.

‘What this man did to our daughter was atrocious and no parent, child or any human being should ever have to endure this.

‘We want to be clear that this was not the result of any domestic dispute. 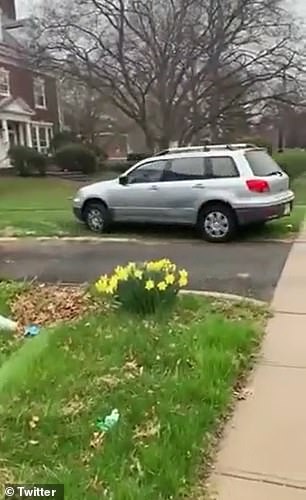 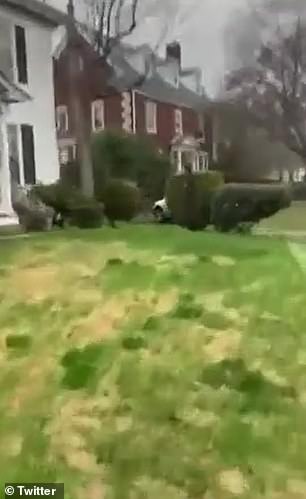 Onlookers, including the cameraman, screamed ‘stop, stop’ but the driver continued to drive over her

‘This man was a complete stranger who committed a heinous act of road rage and attempted to kill our daughter simply because she was trying to get necessary information to lawfully report an accident while he was fleeing the scene.

‘Although we are heartbroken and deeply saddened by what happened, we are thankful that our daughter is alive.

‘We are now focused on her care and recovery and will rely on the law enforcement professionals and the court system to dispense justice.

‘We appreciate the outpouring of love and support but we ask that you respect our family’s privacy during this time.’

County Prosecutor William Daniel said: ‘At that point, the suspect drove his car directly at the victim and she began to run onto the lawn to avoid being struck.

‘The suspect drove onto the lawn and struck the victim, then drove over her before backing up and deliberately running her over a second time.’

AFL great Barry Round dies at 72 as tributes pour in for Brownlow Medal...

Harry Styles wraps up for a winter walk while enjoying a low-key Christmas with...

Hacker, 22, is jailed for stealing unreleased music from Ed Sheeran and Kanye West