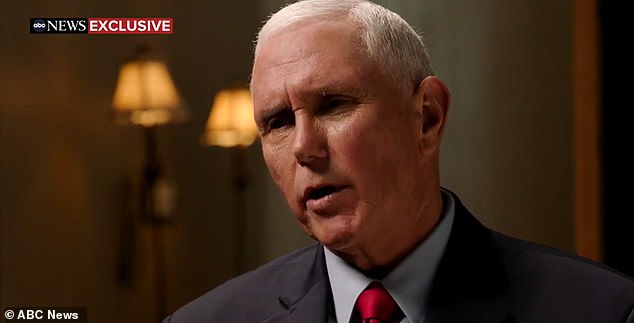 Former Vice President Mike Pence said there will be ‘better choices’ than Donald Trump running in 2024 but insisted the final decision was up to the American people during a clip of his ABC News interview that aired on Monday evening.

Pence’s conversation with the network aired just a day before Trump is expected to launch a third campaign for the White House.

Allies have openly pleaded with the former president to hold off until the makeup of next year’s Congress is fully decided next month, on the heels of a poor midterm election performance by Republicans.

Looking ahead to the next race, Pence has been floated as a potential 2024 contender himself.

He told ABC News that it was something under ‘consideration’ in his household.

But he demurred when asked about his odds of beating Trump in a head-on primary.

The evangelical former Indiana governor had been chosen as Trump’s running mate in 2016 in an apparent effort to boost the New York billionaire’s image with Midwestern conservative Christians.

But their relationship permanently ruptured following the January 6 Capitol riot last year, when Pence refused to go along with Trump’s plan to overturn his 2020 election loss.

Pence said in the Monday segment that he told Trump point-blank that they lost the election ‘many times’ but the ex-president continued to push his fraud theories. 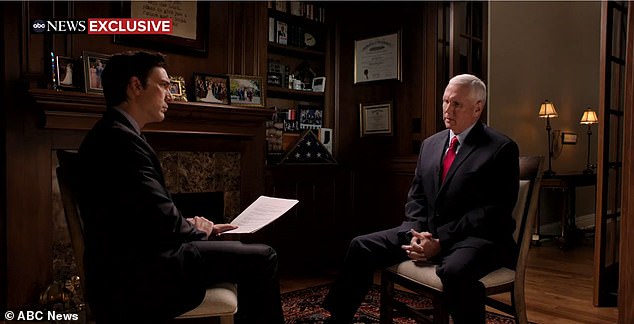 It’s his first interview discussing the Capitol riot. In a previously aired clip, the vice president lays into Trump for his ‘reckless’ tweet calling Pence a coward, which was followed by rioters chanting ‘Hang Mike Pence’ through the halls of Congress.

Asked, after all this, whether Trump should run for president again as he appears to be planning to, Pence replied: ‘I think that’s up to the American people.’

‘But I think we’ll have better choices in the future,’ Pence added. ‘People in this country actually get along pretty well once you get out of politics. And I think they want to see their national leaders start to reflect that same- that same compassion and generosity of spirit.’

‘And I think- so in the days ahead, I think- I think there will be better choices.’

Dropping his own White House hint, Pence continued, ‘And for me and my family, we will be reflecting about what our role is in that.’

‘We’re giving it consideration in our house,’ he said when asked forthrightly about his 2024 plans. ‘Prayerful consideration.’

However, Pence was more hesitant to say he’d challenge Trump head-on if the ex-president follows through with his expected plans. 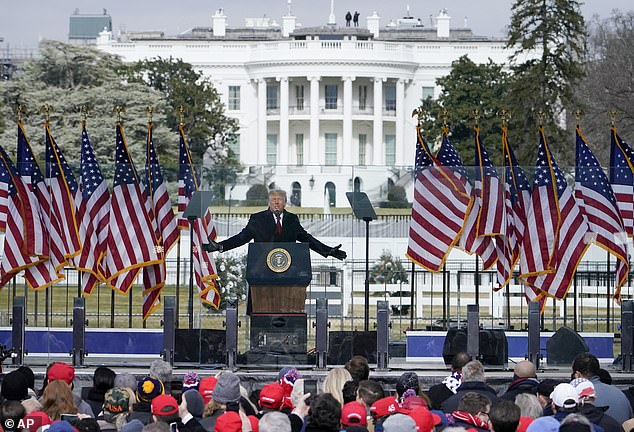 Trump (pictured on January 6, 2021) is expected to announce a third campaign for president on Tuesday evening

‘That would be for others to say, and it’d be for us to decide whether or not we’d want to test that,’ Pence said.

Trump has been teasing a ‘special announcement’ to be made from his Mar-a-Lago home in Florida on Tuesday night at 9pm ET.

Pence is bookending it with his own programming, in what could shape up to be an early 2024 political cold war, with his 10pm special on ABC News tonight, the release of his new book tomorrow, and his CNN town hall on Wednesday night.

But early GOP voter polls suggest Trump is by far the runaway favorite for the 2024 Republican nomination. Most surveys show Florida Governor Ron DeSantis second and Pence at a distant third at the highest.

But if the 2022 midterms were any indication, polls may not be able to tell the full picture of the next elections’ political landscape.

The vast majority of projections leading into November 8 forecasted a ‘red wave’ taking over the House of Representatives and flipping key governorships and Senate seats.

However, as of Monday evening, the House is still in play with Republicans on track for a slim majority – while the Senate was called for Democrats on Saturday night.

It’s made some Republicans who once took Trump as the de facto party leader now question his place at the top. His existing critics within the GOP appear eager to close ranks against him, with Trump-backed Republican candidates losing close races in pivotal states.

Buffalo gunman ‘had name of a Waukesha Parade victim on his rifle when he...