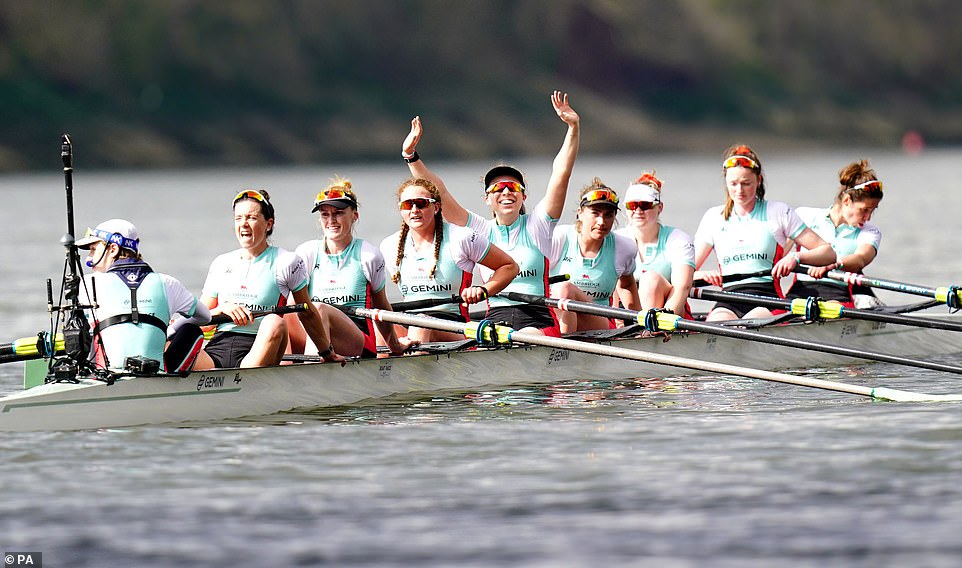 Crowds have gathered under sunny skies along the River Thames for the annual Oxford and Cambridge University boat race today, as weather forecasters a ‘fine Sunday’ following a chilly start to April.

It is a welcome change as the annual rowing contest between crews from Oxford and Cambridge got underway this afternoon.

Olympic rowing gold medalists James Cracknell and Sir Matthew Pinsent were pictured arriving ahead of the clash, following a chilly night across the country which saw average recordings of up to minus 4C.

The men’s race was won by Oxford and Cambridge emerged as victors in the women’s race.

In the first race, Oxford women got off to an early lead but Cambridge women’s team emerged the winner after they quickly closed upon the gap as the boats passed the first bend in Fulham.

Cambridge’s Bronda Sykes told the Guardian: ‘It was insane, it was fast, it was emotion, all in one go.’

The men’s rowing teams began their contest at 3.23pm and saw Oxford emerge as winners for the first time since 2017.

The boat race returned to its traditional course on the Thames for the first time in three years after disruption brought about by Covid. Last year’s event was held on the Great river Ouse near Ely, Cambridgeshire, and the 2020 event was cancelled altogether. 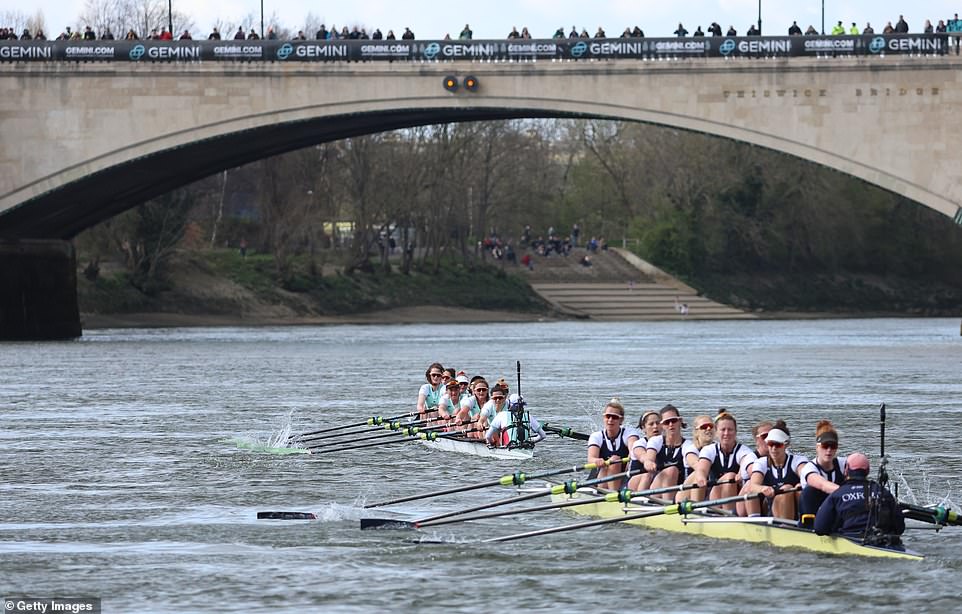 The race was neck and neck with Oxford women’s team getting off to an early lead, until they were overtaken by Cambridge 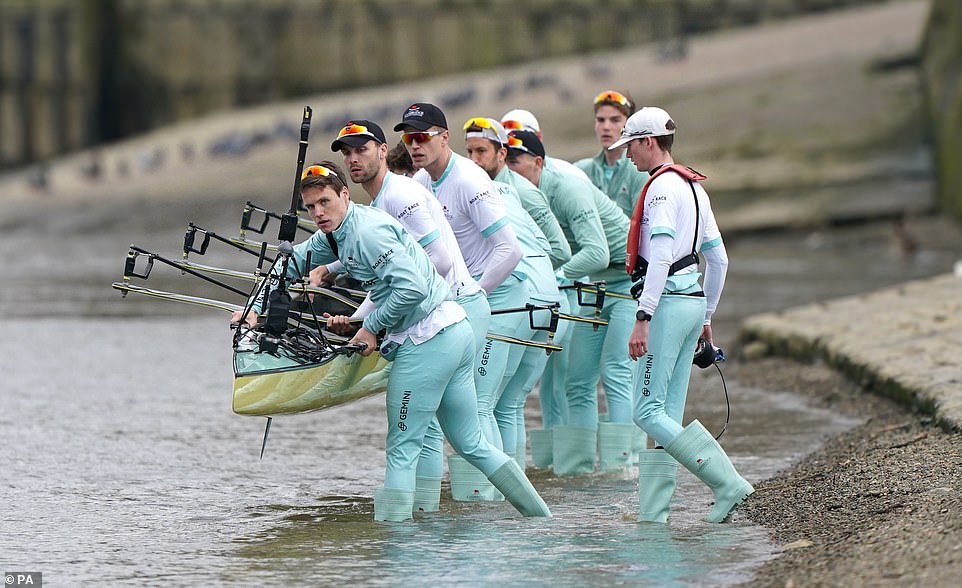 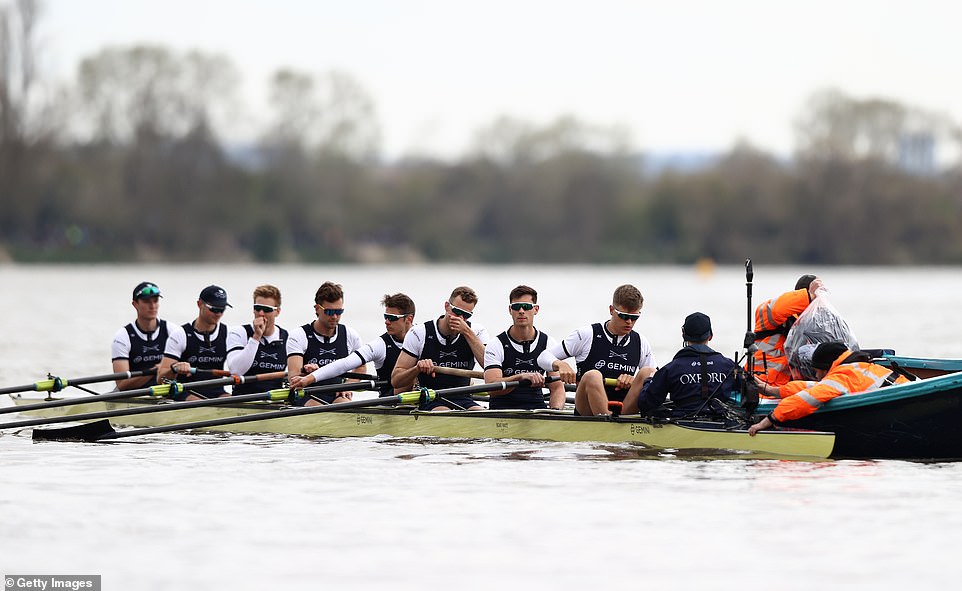 It follows plunging overnight temperatures, in which the coldest climes were found in Wales and the West Midlands at minus 7C (18F).

But the cool trend is set to reverse today as by lunchtime, some parts of the UK will reach 10C (50F), with lows of 5C (41F) in Peterborough, Birmingham and York.

The race attracted sizeable crowds, particularly after it was cancelled in 2020 due to the Covid pandemic.

The event eventually settled in London and has been held annually since 1856, except last year and for the years 1915–1919, due to the First World War, and during most of the Second World War. 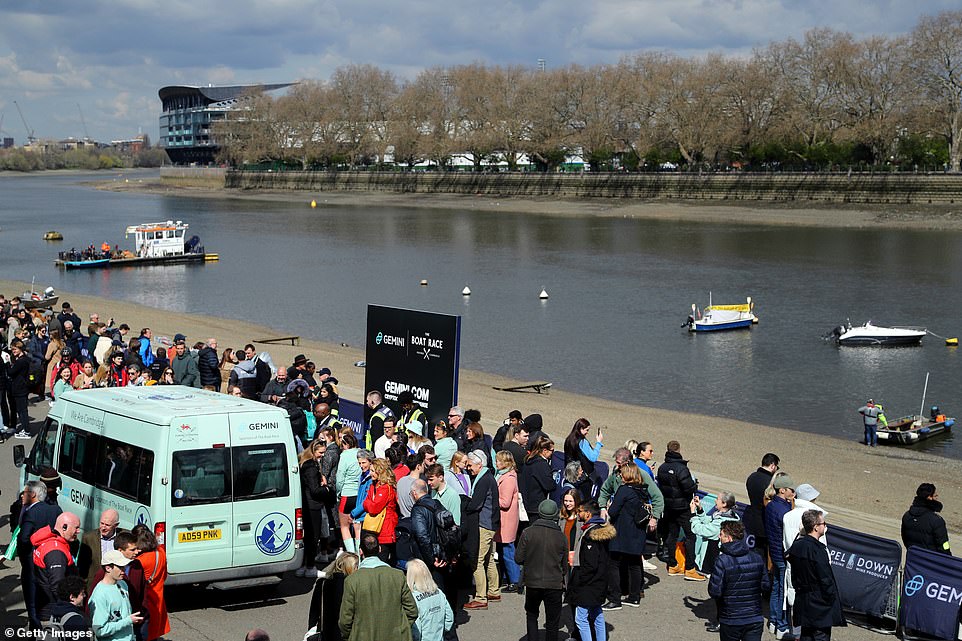 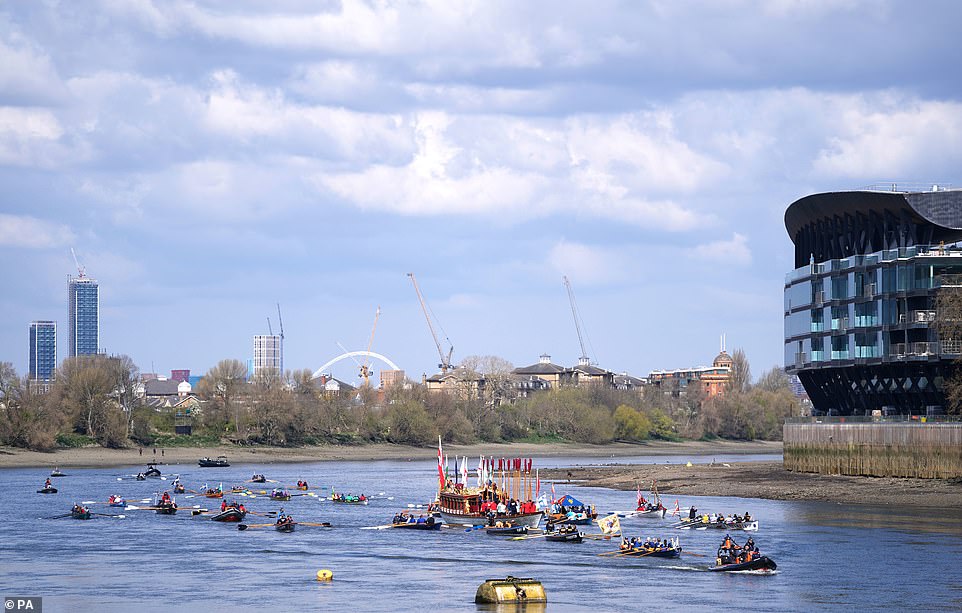 The pre race flotilla the 167th Men’s Boat Race on the River Thames, London, as clear skies make the perfect day for a boat race 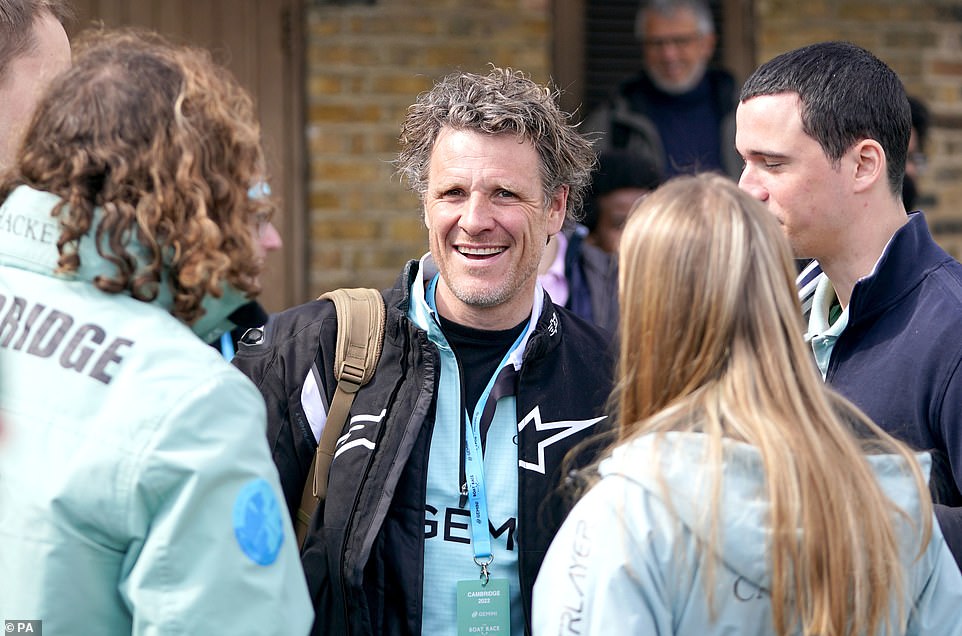 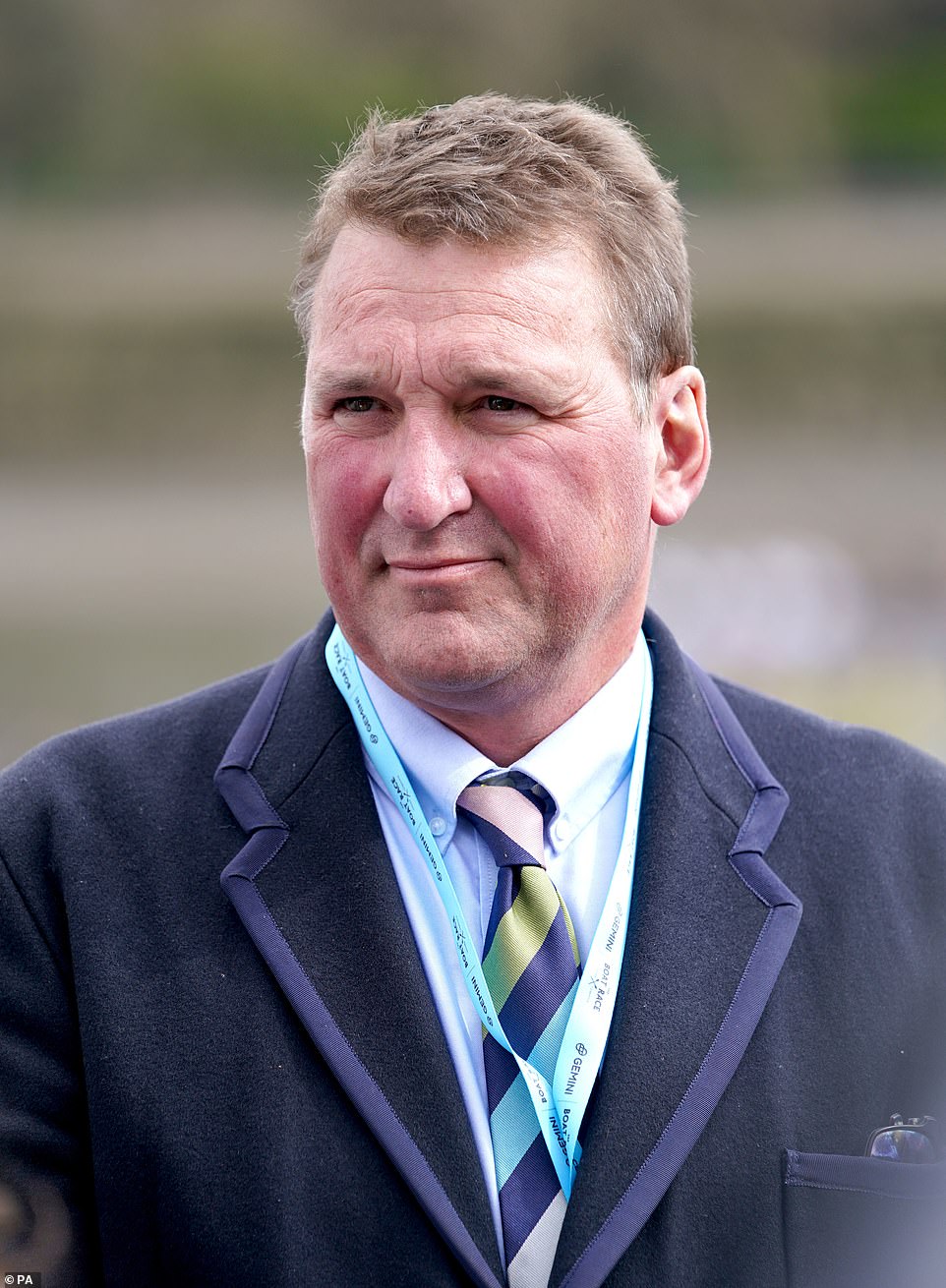 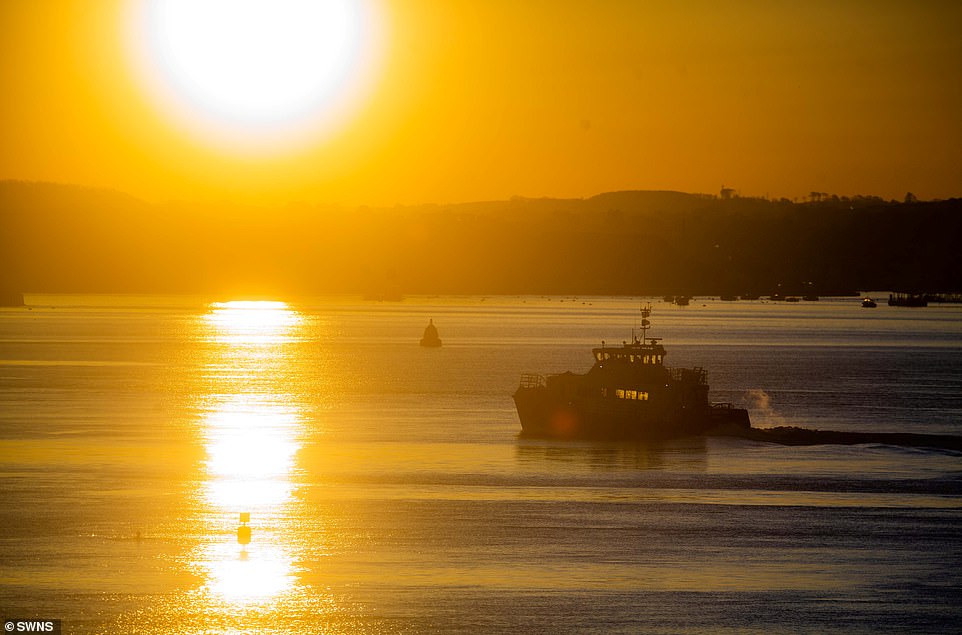 A dazzling sunrise unfolds at the Plymouth Sound in Devon, as much of the UK sees a return to Spring weather after a chilly start 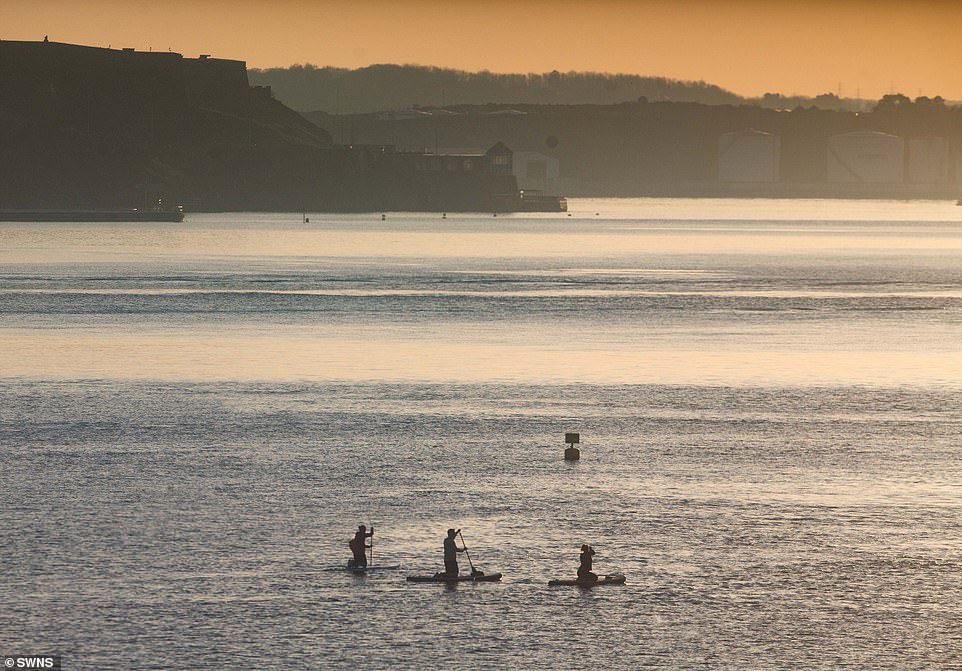 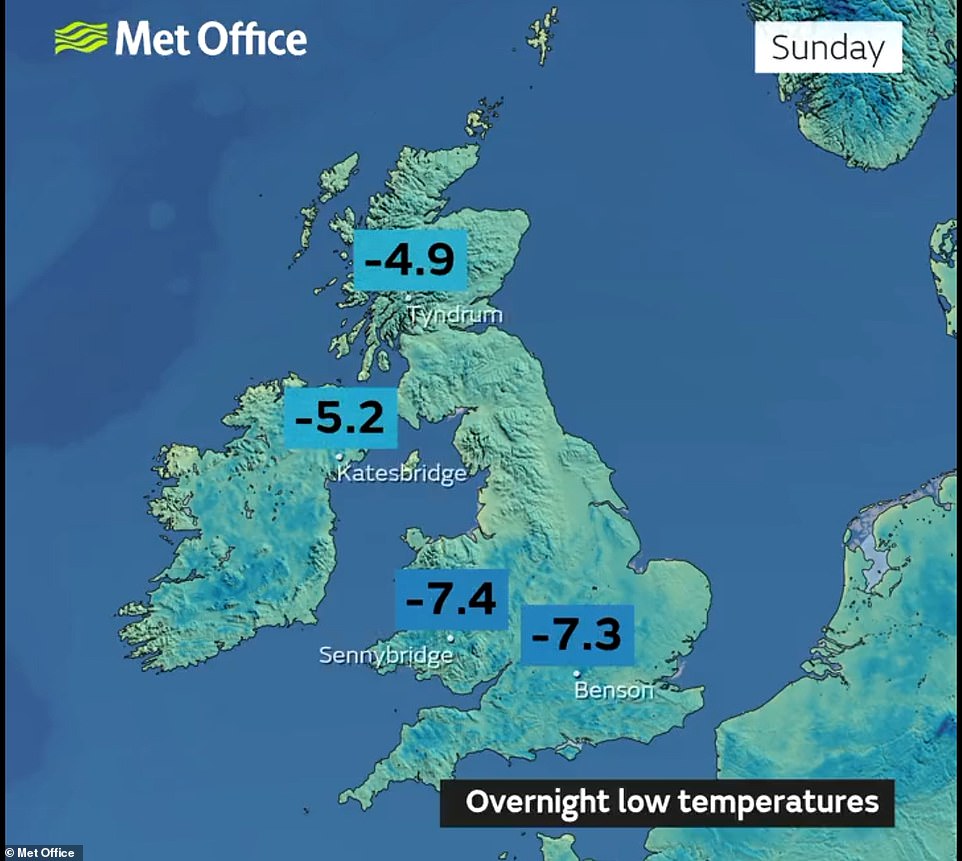 Temperatures plunged overnight to below freezing level at minus three to minus four degrees celsius across most of the UK, with the coldest climate in Wales and the West Midlands at minus 7C (18F) 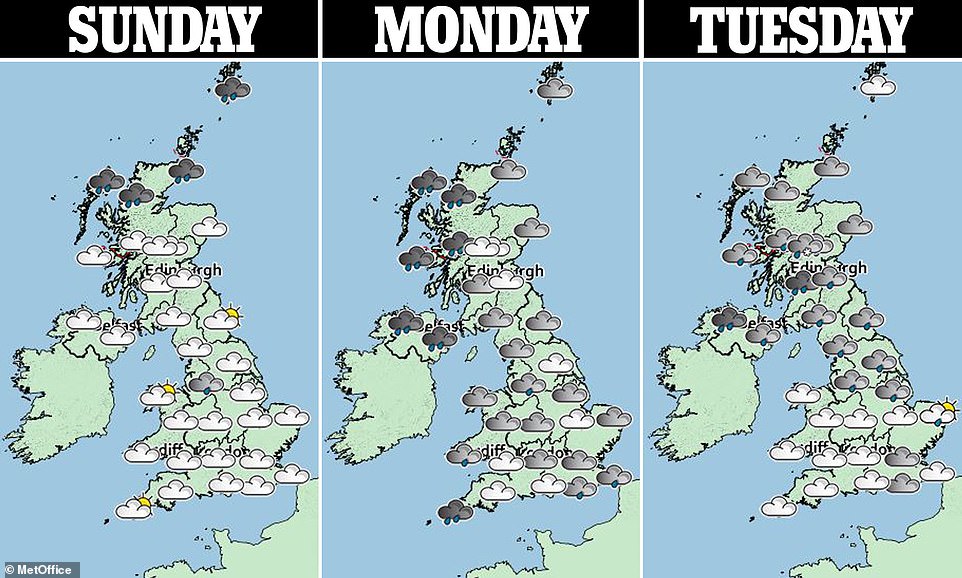 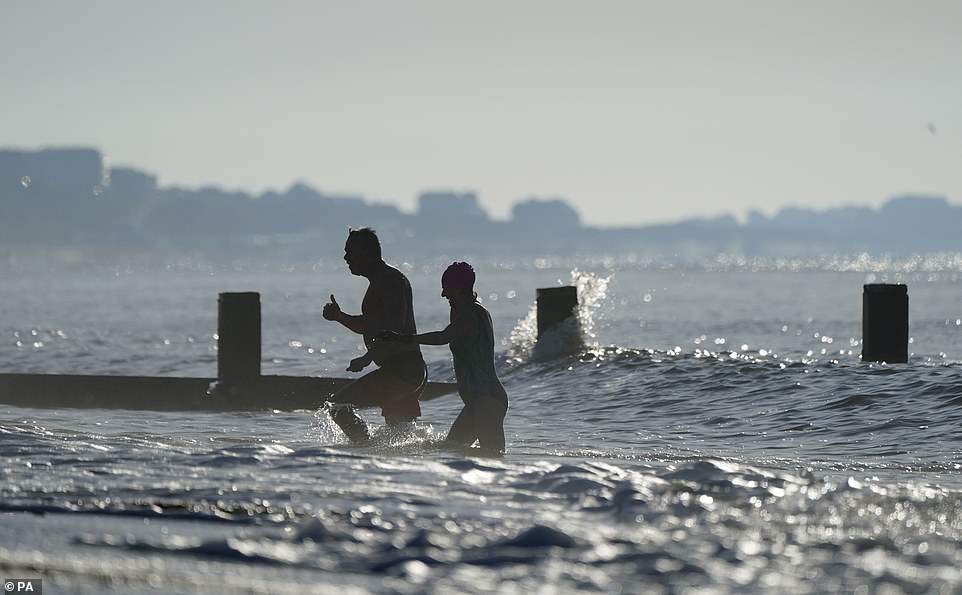 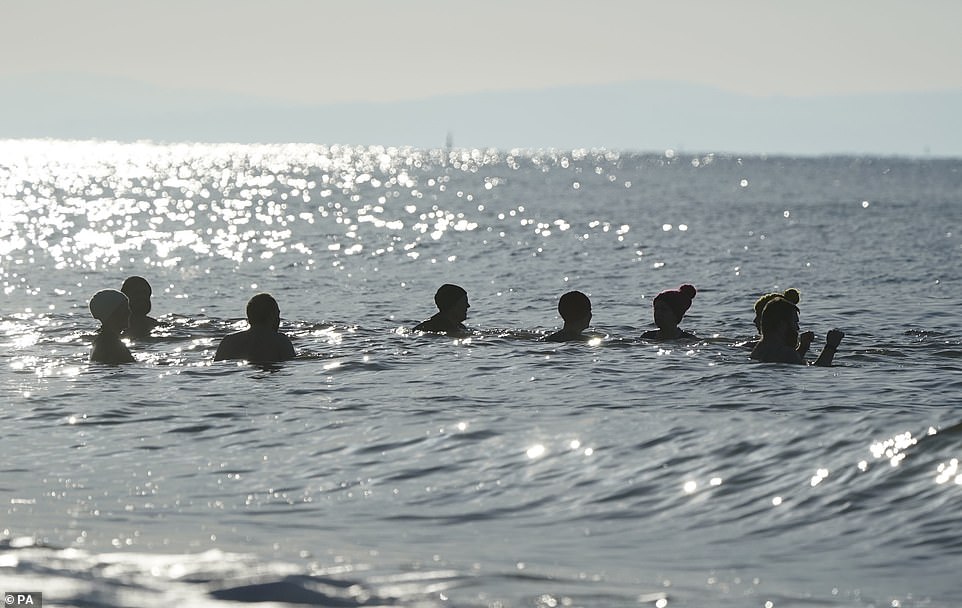 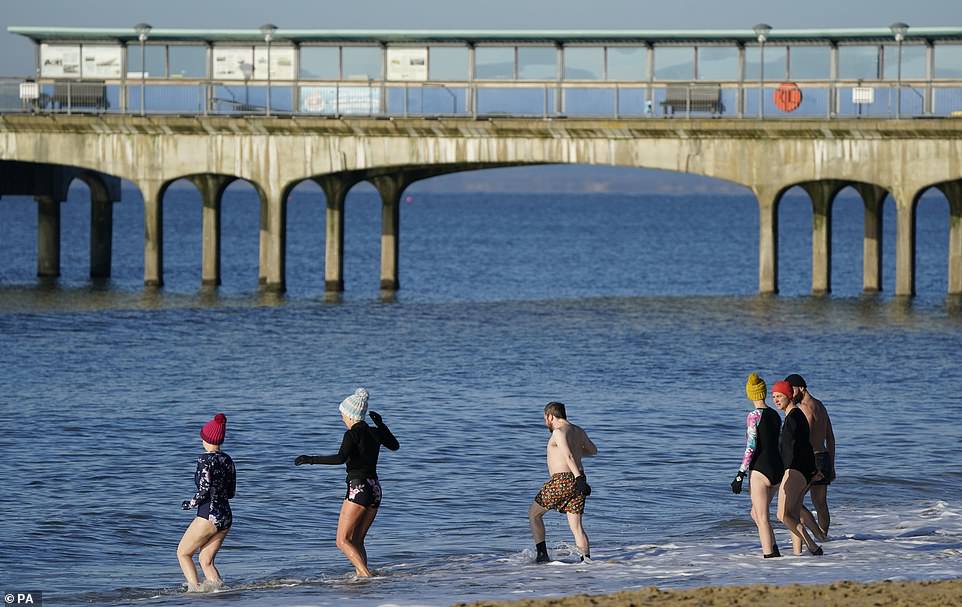 Hardy swimmers took the plunge in Boscombe, Dorset, this morning as temperatures slowly bounced back from below freezing

After a mild afternoon today, rain will push southwards through the evening, continuing for Scotland and Northern Ireland and moving into northern England and the rain will become heavy for western Scotland.

By the early hours of the morning, the rain will have covered all parts of the country. A strong westerly breeze.

The Met Office stated: ‘A fine day for most on Sunday with some sunshine, particularly England and Wales though a few showers possible for central parts.

‘Cloudier further north with rain arriving from the northwest during the day. A little milder than Saturday.

‘Rain over Scotland will continue southwards overnight. Temperatures rising from the northwest though falling for the first part of the night for England, Wales and Northern Ireland. Becoming windier.

‘Cloudy for most with rain over western upslopes. Elsewhere some light rain at times but many eastern areas dry with some brightness. Breezy for all but milder than Sunday.’

Tomorrow will see an overcast start with rain affecting most areas, which will be heavy for western Scotland.

In the afternoon, the rain will turn lighter and will become more patchy and showery. The rain will clear from southern England, but will persist in other areas. A strong westerly breeze

Patchy light rain and drizzle for most on Tuesday, with more persistent rain in the afternoon, especially for Northern Ireland, northern England and Scotland. Cloudy for most. Moderate winds.

Showers for most on Wednesday but with persistent, heavy rain for Scotland. Some sun for southern England.

The icy weather this month comes after the UK experienced its sunniest March since 1929 and its second sunniest overall, with records dating back to 1919.

Northern Ireland basked in 90 per cent more sunshine than average for the month, with a total of 192.5 hours of sun.

Scotland saw 64 per cent more sun than usual, with a total of 160.1 hours, while England enjoyed its sunniest March at 168.1 hours and Wales its fifth brightest with 157.9 hours. 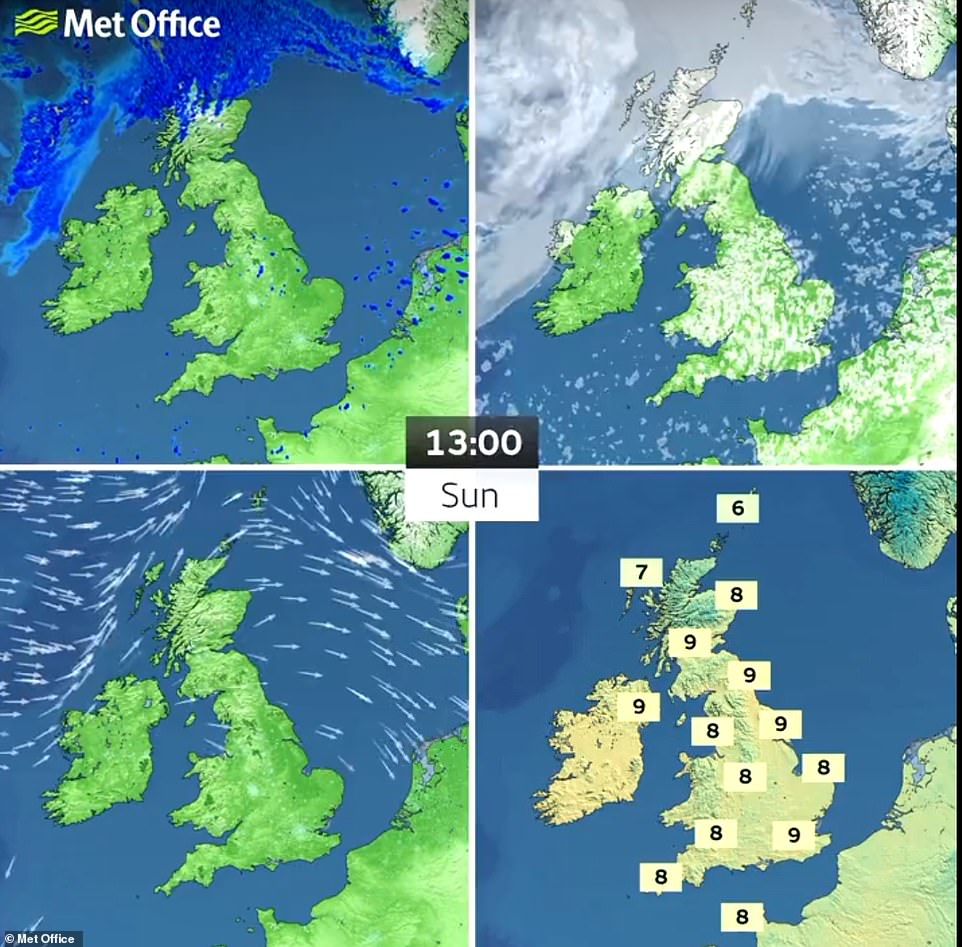 By the afternoon, most of the UK will be basking in climes of 7C to 9C – a welcome relief after a freezing start to April 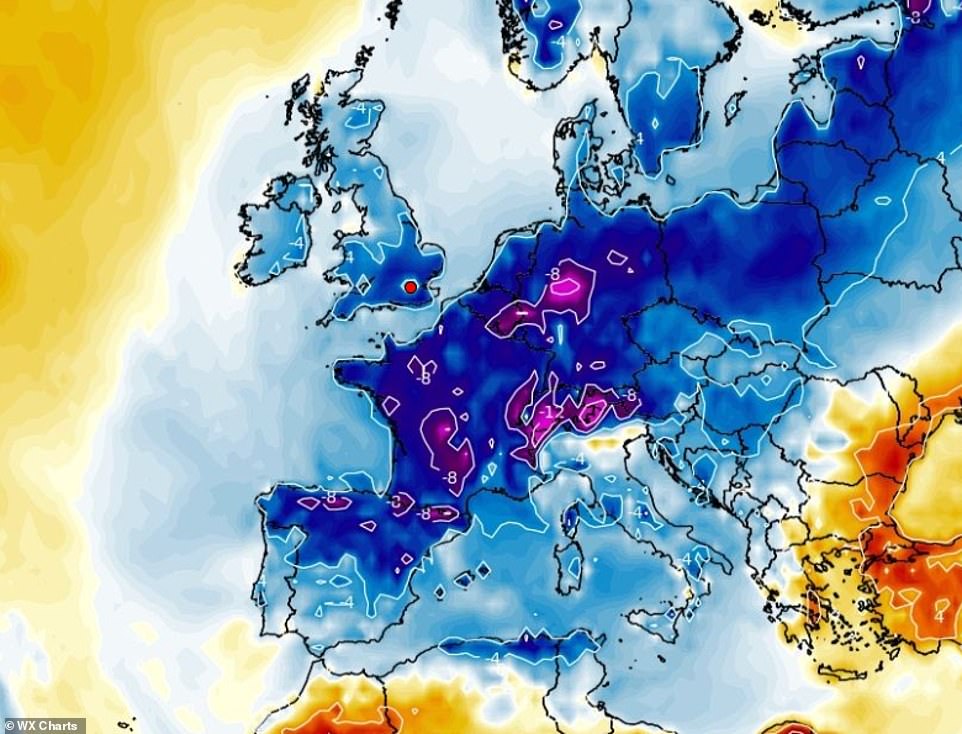 Temperatures will reach 10C (50F) in some parts of the UK today (pictured), with lows of 5C (41F) in Peterborough, Birmingham and York 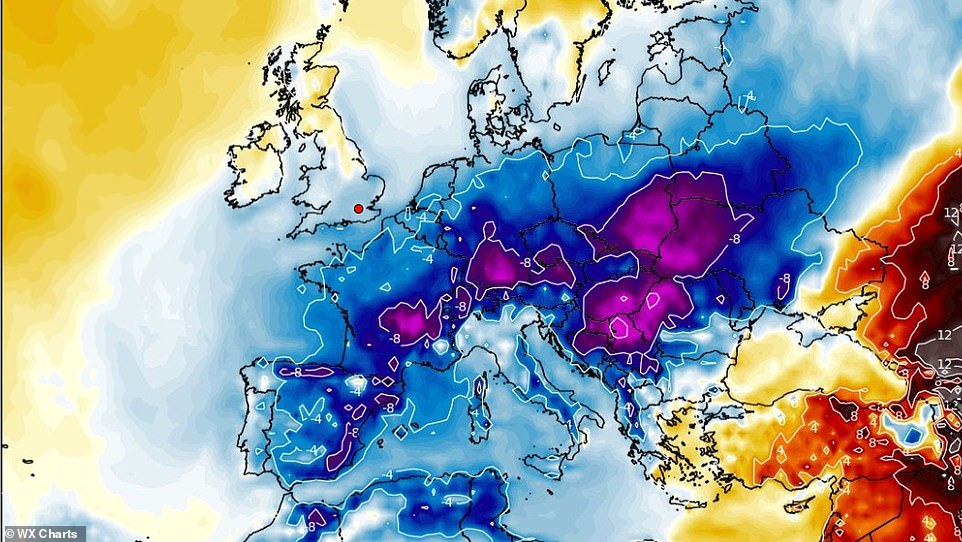 The national forecaster says that from Monday through to Wednesday next week, it will be generally cloudy, unsettled period for most, although milder than recently.

The most persistent rain will affect northern and western areas, with some of this turning to snow over high ground.

Until Friday 15 April, further unsettled conditions are expected to arrive later in the week, with most areas seeing spells of rain or showers, potentially wintry on high ground at times.

‘Periods of drier and more settled weather are still possible, but more short-lived than recently,’ the Met Office reports.

‘Showers may be heavy at times, with hail and thunder possible. Strong winds are also likely at times, mainly in the north and the west, with temperatures generally near or slightly above average.’

Towards late April, there are ‘tentative’ signs of more settled conditions redeveloping, with temperatures ‘likely’ to be above average, especially in the south.

Yellowstone closes ALL entrances due to ‘unprecedented’ flooding

Female carer is FIRED after shocking video emerges of her screaming at ‘bad’ toddlers...

Election 2022: People smugglers intercepted by Sri Lanka amid warnings more will come to...