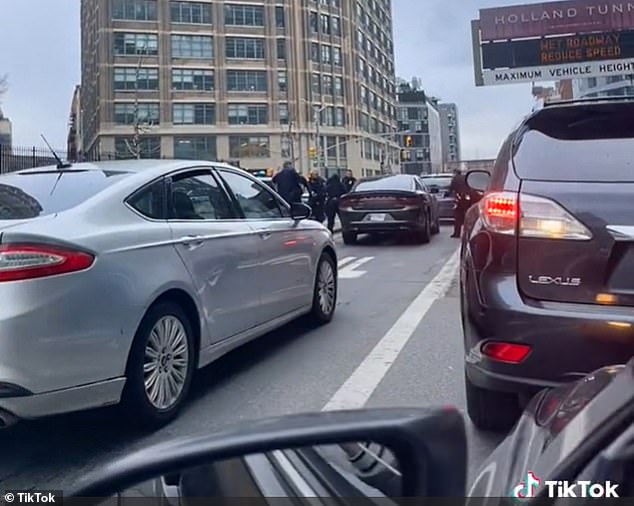 A suspected shoplifting gang who are said to have stolen $70,000 of designer gear were filmed ramming a NYPD cop car to try and escape – only for officers to stop them.

The three suspects, identified as Janavia Marable, 29, Brianna Grier, 27, and Jahil Pamplin, 29, were filmed being busted after targeting Kirna Zabete  – a high-end boutique that specializes in selling designer fashion – in Manhattan’s ritzy SoHo neighborhood on Sunday.

Their Dodge Charger was filmed trying to race away from cops on Canal Street, then reversing into an NYPD cruiser in a bid to disable it.

But moments later, a huge posse of cops descended on the Dodge and started smashing at it with batons, with the suspects, who are from Newark in New Jersey, pulled out moments later.

A dramatic moment captured a NYC shoplifting gang as they ‘stole $70,000 of designer clothes and bags’ before being rammed and stopped by a NYPD car as they tried to get away

Sunday’s spree allegedly saw the gang steal $14,000 of glitzy Dior, Gucci, Bottega Veneta and Sacai garments. The same crew is said to have been behind a $50,000 raid on the same store on February 6.

The video, which was posted to TikTok, shows as police officers hit the windows with their batons on the crew’s Dodge Charger.

Afterwards, one of the women could be seen being blasted by the cops for ramming the police car – only to shrug and say that she didn’t know what they were talking about .

During Sunday’s robbery, the trio reportedly ‘removed items from the display cases and racks,’ before running out of the store and jumping into the Charger, the New York Post reported.

‘When officers attempted to conduct a lawful car stop, the vehicle refused to pull over and recklessly drove through traffic,’ an NYPD statement said. 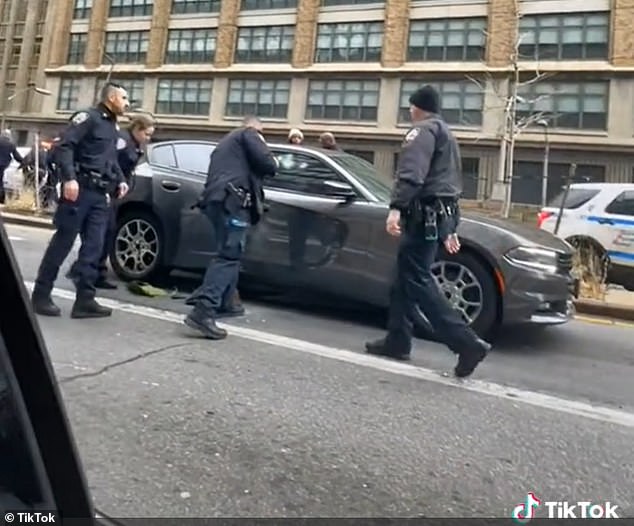 The video, which was posted to TikTok , shows as police officers hit the windows with their batons on the crew’s Dodge Charger 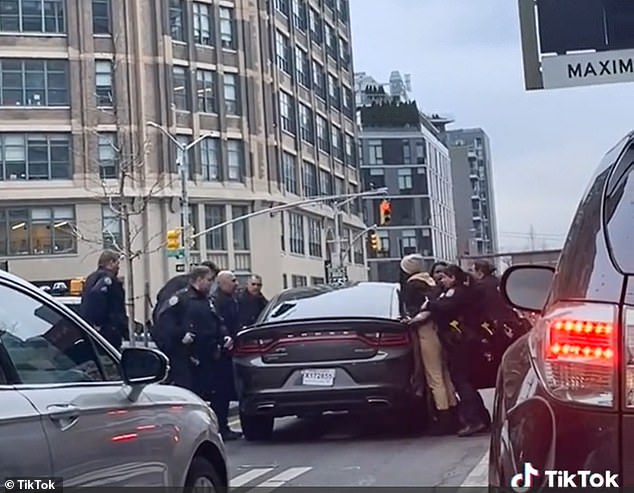 They made off with a Dior pants, Dior jacket, Gucci pants, several Gucci jackets, a few Sacai jackets, a Bottega crossbody and a Bottega Jodie bag, all of which is worth a combined $14,400.

The three Newark, New Jersey residents were all charged with grand larceny, reckless endangerment, fleeing an officer and resisting arrest.

Authorities said the two women in the group had previously shoplifted at the same store back on February 6, and received an extra charge for robbery for that incident.

During that time, Marable, Grier and two other suspects entered the store before making off with 26 handbags valued at $50,000. 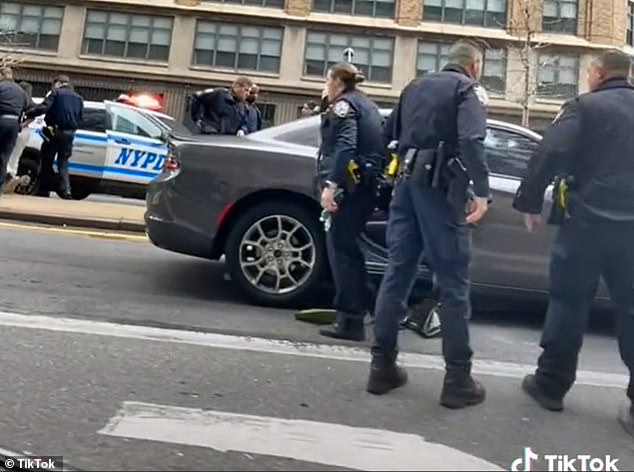 Pictured: NYPD investigate the scene after ramming a shoplifting suspect’s car in an effort to stop them from fleeing 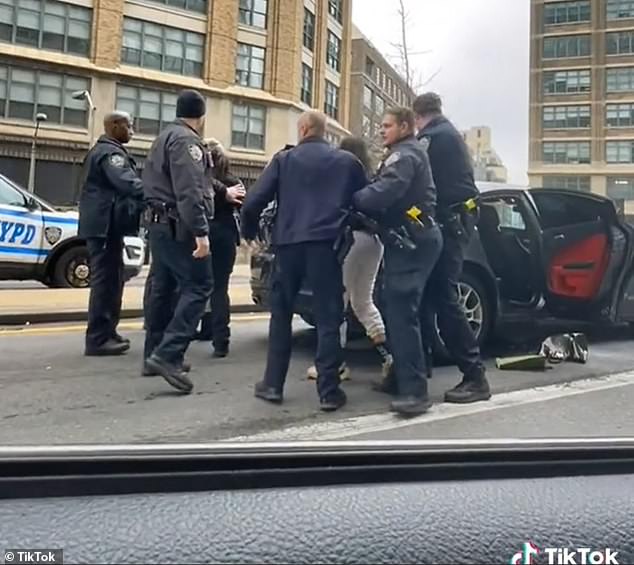 Janavia Marable, 29, and Brianna Grier, 27, two suspects being arrested for the shoplifting incident in Soho 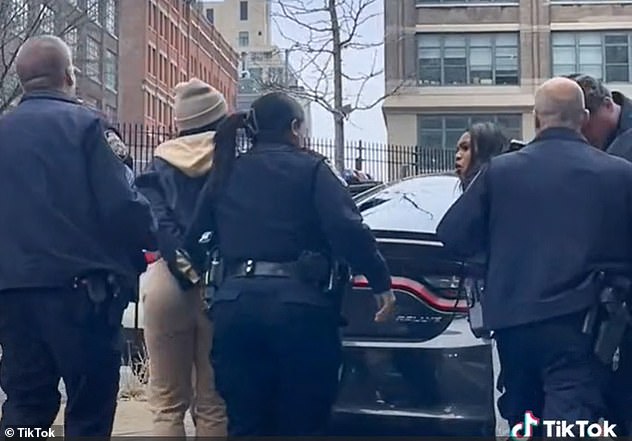 The three Newark, New Jersey residents, who of which pictured above, were all charged with grand larceny, reckless endangerment, fleeing an officer and resisting arrest

Police said in that incident, one of the thieves showed a store employee a gun in his waistband, with the suspects eventually fleeing the scene in two white SUVs.

That investigation is ongoing, according to police.

The pricey shoplifting incident comes as the New York Police Department reported a 44 percent spike in crime since last year.

Retailers have been pushing lawmakers for stricter punishments against shoplifters as a crimewave sweeps the nation, including in NYC where a Rite Aid store in midtown Manhattan closed its doors in February after having $200,000 worth of product stolen in just two months.

‘They come in every day, sometimes twice a day, with laundry bags and just load up on stuff,’ an employee at the now-shuttered Hell’s Kitchen drug store, which used to be open 24 hours, told the New York Post.

‘They take whatever they want and we can’t do anything about it. It’s why the store is closing. They can’t afford to keep it open.’ 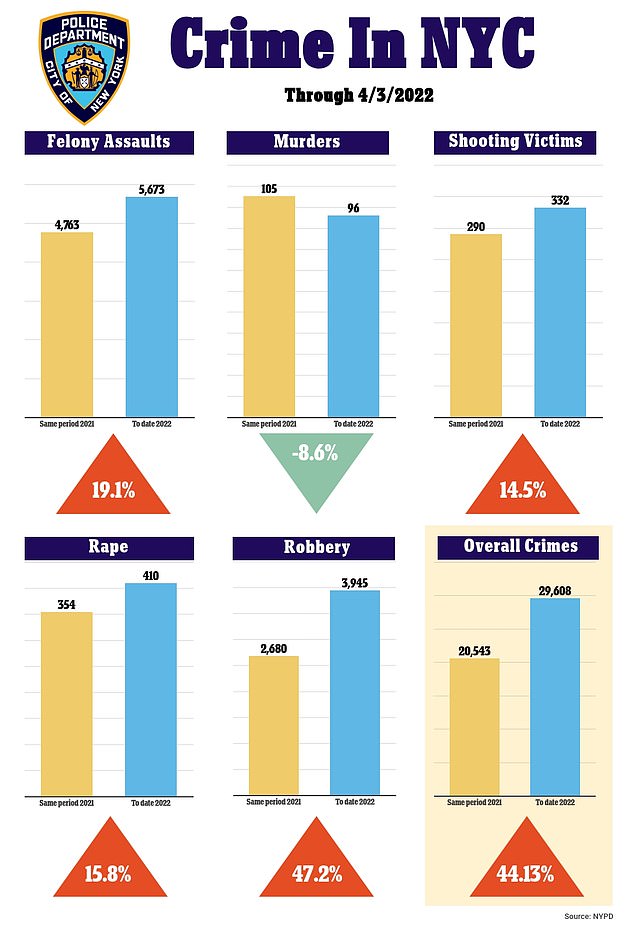 Violent crime continues to rise in New York City, with overall crime up more than 44 percent

Leaders in the retail industry – which was already hard hit by the impacts of the pandemic, labor shortages and supply chain interruptions – argue theft has gotten out of control and security guards have their hands tied, as they are told to ‘observe and report’ and not get physical with criminals.

The worries reached a peak in summer amid nationwide smash-and-grab robberies, with Sex and the City Star Cynthia Nixon suggesting CVS allow the thieves to get away with the crimes rather than locking up the products behind cases.

The actress and failed New York gubernatorial candidate tweeted last year that she had noticed her local CVS in SoHo had ‘started’ locking up ‘basic items like clothing detergent.’

‘As so many families can’t make ends meet right now, I can’t imagine thinking that the way to solve the problem of people stealing basic necessities out of desperation is to prosecute them,’ Nixon, who is worth an estimated $25 million, tweeted.

She was slammed by people who said the solution was not to invite theft. CVS, Walgreens and Duane Reade have been locking up items for years to deter thieves amid a widespread decriminalization of shoplifting.

I’m A Celebrity 2022: Scarlette Douglas is the second star voted off

Suspect, 25, is charged over Bishopsgate attempted robbery and knife attack