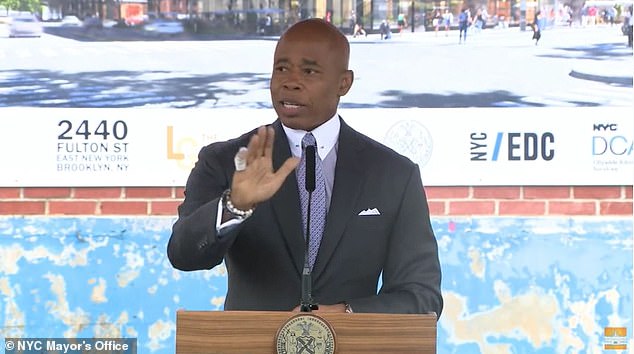 NYC Mayor Eric Adams DEFENDS firing of city attorney who berated him over child mask mandate: Cites her ‘inappropriate’ tweets and insists Law Department made the call to terminate her before fateful press conference

New York City Mayor Eric Adams has said that a city attorney who was fired after berating him over child mask mandates at a press conference was terminated for her ‘inappropriate’ tweets.

Adams told reporters on Wednesday that he had no idea who Daniela Jampel was when the mother of three confronted him during a press conference about mask mandates for kids under age five.

The mayor insisted that the city’s Law Department, where Jampel had worked since 2016, had made the decision to fire her prior to the confrontation at Monday’s press conference.

‘Did not know who she was, did not make the call to fire her,’ said Adams. ‘It doesn’t bother me when people call me names — listen I’m an ex-cop, people have been calling me names for years.’

‘But what she tweeted, sent out, it was inappropriate, and the Law Department made the decision and notified me of that prior to that press conference. I had no interaction with that at all.’ 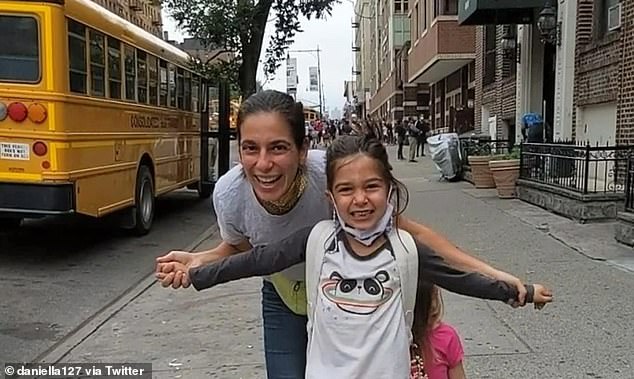 Adams did not clarify which of Jampel’s tweets had triggered her termination, and a Law Department spokesman did not immediately respond to an inquiry from DailyMail.com on Wednesday afternoon.

Jampel is vocal on Twitter, and on Friday she had written that her ‘summer goal is to chase down the ineffective and spineless NYC politicians (including @NYCMayor) who do nothing as public health petty bureaucrats continue to force toddlers to mask for no other reason than they can.’ 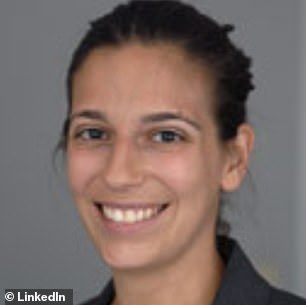 Jampel is vocal on Twitter, and it’s unclear which of her tweets Adams was referring to

The Law Department previously told DailyMail.com that Jampel had been fired for making ‘made troubling claims’ in public statements.

Adams said on Wednesday that he did not recognize Jampel when she confronted him on Monday.

‘When she spoke, it was clear that she was not a reporter, but what did I do? I said, “allow her to speak”,’ he said.

The mayor implied that she was part of a group that had threatened city officials.

‘There is a group traveling around this city, banging on my health commissioner’s door, shouting and screaming while his children are inside, threatening his life,’ he said.

‘There’s a group running around this city who is the numerical minority, but they are loud so people believe they are the majority,’ added Adams. 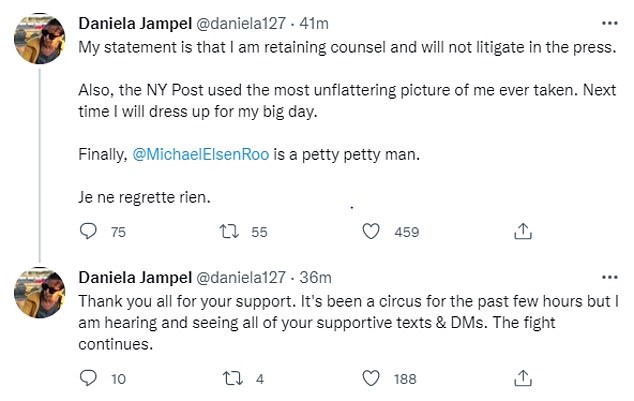 Jampel issued these tweets after her dismissal from NYC’s Law Department, saying she regretted nothing and that ‘the fight continues’

A source close to Jampel told DailyMail.com on Tuesday that her firing ‘could not have been performance related’ as she has been out of the office on maternity leave for several months.

The person also says that Jampel received email notice of her termination within 30 minutes of the press conference, and that her direct supervisor in the Law Department did not seem aware that she was being fired.

The source also strongly disputed City Hall’s claim that Jampel ‘lied’ to get into the press conference by posing as a journalist.

A Law Department spokesman told DailyMail.com in a statement earlier this week: ‘We hold all of our employees to the highest professional standards. In public statements, Ms. Jampel has made troubling claims about her work for the city Law Department.’

‘Based on those statements, the decision had been made to terminate her prior to [Monday],’ the spokesman added.

The statement added that Jampel’s ‘decision to lie to City Hall staff and state she was a journalist at a press conference, demonstrate a disturbing lack of judgment and integrity.’

Jampel on Twitter announced her intention to hire an attorney and told DailyMail.com: ‘I can’t really talk about it, until I have a lawyer.’

Bill Nye is schooled online after claiming that Juneteenth was the day that slavery...

Johnny Depp enjoyed £14 fish and chips in Newcastle pub as he toasted $15M...

Radiologist fined $750 allowed to keep his license after missing breast cancer in 24...